Meg Gill, 33, became the youngest female brewery owner when she started Golden Road Brewing in Southern California in 2011. Since being acquired by Anheuser-Busch in 2015, Golden Road has grown to four breweries (two in Los Angeles, one in Anaheim and a brand new nano-brewery in Sacramento) now making 40 different beers in total. Before getting into the colorful world of craft beers, Meg was a record-setting swimmer at Yale.

On Beerland on Viceland – the third season is now airing – Gill travels the country in search of the best homebrewer in the U.S., with one brewer getting the opportunity to have their beer mass-produced at Gill’s Golden Road brewery. We interviewed Gill on her most recent trip to New York, a place she certainly won’t be toasting anytime soon.

“I can like New York for a couple days, then be ready to go home. I stayed at the St. Regis this time. It’s a little fancy. I only had a water at the mini bar. I went across the street and the bar was too busy. I couldn’t get served – I’m not an aggressive New Yorker – so I went to The Peninsula. They didn’t have a great beer selection.”

New York, get it together! 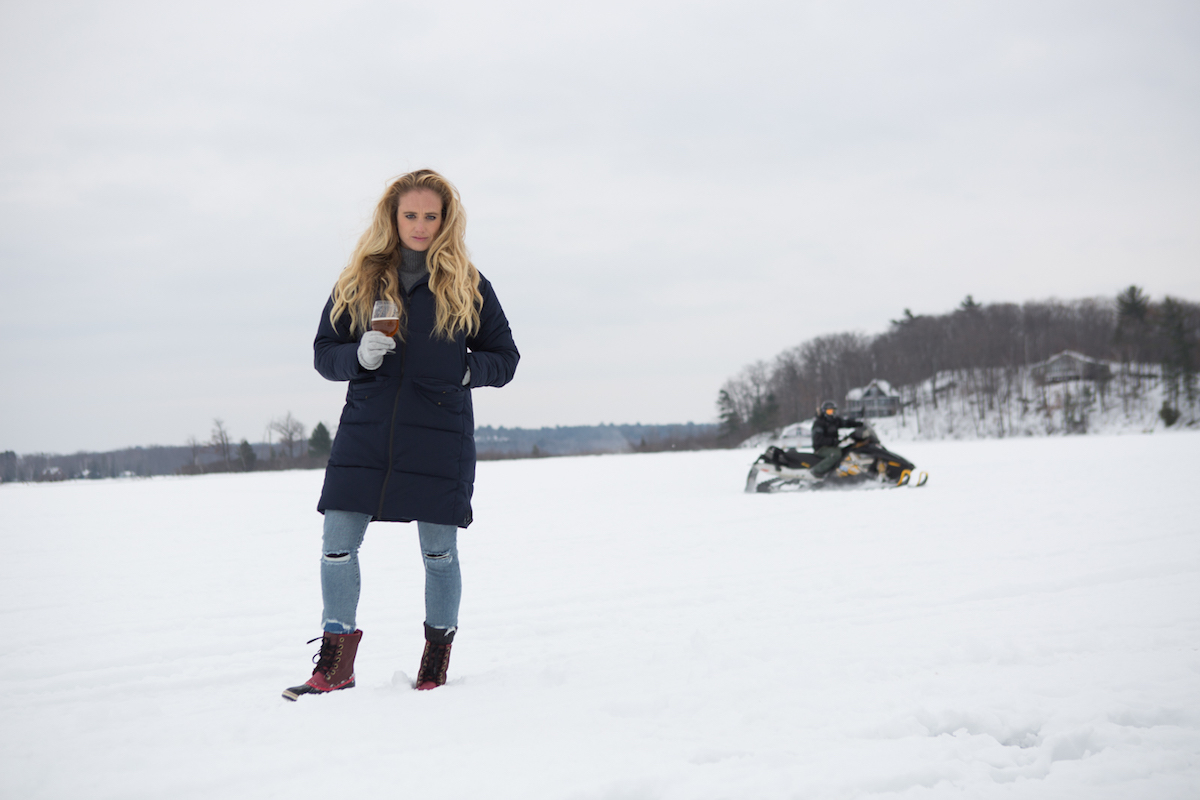 For a long time when we were building Golden Road, a few of us would take a trip where we would stop in San Clemente for growlers at the first Pizza Port you can get to. They’re a brew pub, one of the original craft brewers down there and they have probably the most Great American Beer Festival medals of any brewery. Everything is extremely fresh, can’t get it outside of that area. Then go over the border to K-38 where there’s just this old school longboard wave and no people. The surfing is amazing! You can ride a wave for 200 yards! When you’re in the water, it’s basically half Mexicans and half southern Californians and that’s one of those places where you know there’s something special about being in the water; there’s no hostility.

There’s this one condo complex of vacation rentals right on the break. There’s one guy you call and he’ll tell you if he can get you in for a few nights. It’s kind of this known, but not known little cool spot.

It’s a little scarier now than it’s been. We did have two experiences. One where the Federales were coming into a gas station and pulling money out of the register. One was a robbery where a kid with a gun walks in and tried to hold up a liquor store and got scared and ran away when the cops came. I’m usually with a couple of dudes, but when someone’s pointing at us, it’s a little freaky.

3  Where else should beer lovers visit?

Depends what you want. If you want traditional beer that tastes unbelievable for the freshness go to Germany. The reason for going to Germany is the understanding that fresh beer, and beer that hasn’t traveled far, tastes better. As well as their 500,000-year-old recipes – they still subscribe to that hops, water, yeast, malt law, the German purity law in beer. Every town has multiple breweries. And 10 years ago, that statement didn’t exist. In Germany, the seriousness with which they take beer, and the beer laws, makes the beer even better than anywhere else. 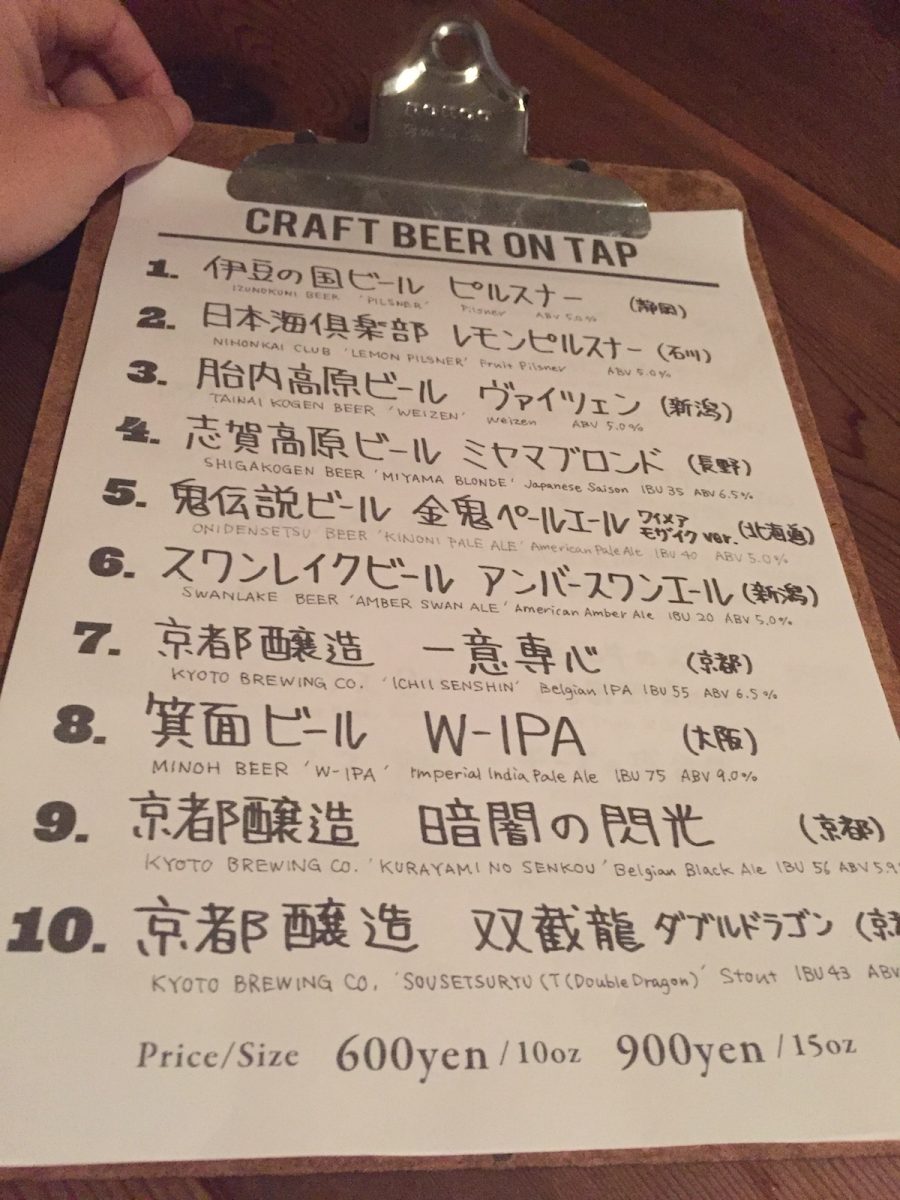 Domo arigato Japan for all of these beers!

But if you want innovation, stay in the U.S. Go to Colorado. I recommend going to both the Denver and Boulder areas, but also Fort Collins. You can easily make a week, 10 days out of a Colorado trip and do amazing outdoor activities and see amazing breweries. And San Diego is amazing because of the innovation there and the beach lifestyle.

There’s craft beer all over the world now, big cities like Tokyo is a good one. Great Britain for casks. Ireland for Guinness (basically the only reason you go there). And then Belgium has all the wild yeast and all the monasteries where they are built out. Their business to keep the monastery going is beer, which is very cool.

4  If I were to visit Anaheim, what is there to do?

Anaheim is interesting. The mayor is trying to establish it as a beer city. There’s a bunch of breweries there, Bottle Logic is a real popular one right now. The Bruery, they do probably more barrel-aged stuff than anybody in the country, one of the largest barrel selections probably.

I’ve gone to the golf course in Anaheim where Tiger Woods grew up playing, which is a total shithole – there are cigarettes all over the course. So, if you want to be humbled by Tiger Woods for the first time in your life, go to where he learned to play golf.

5  Have you come across a beer town that’s also a good golf town?

Just south of that K-38 surf break are a couple golf courses. If you want to surf in the morning, go to a taco stand and drink beer in the middle of the day and play golf 30 minutes south, that Ensenada area is pretty good. The fucked up part, these country clubs don’t give a shit about good beer. I go into my club and complain about the crap beer. They ended up taking some [Golden Road] but they’re lazy. 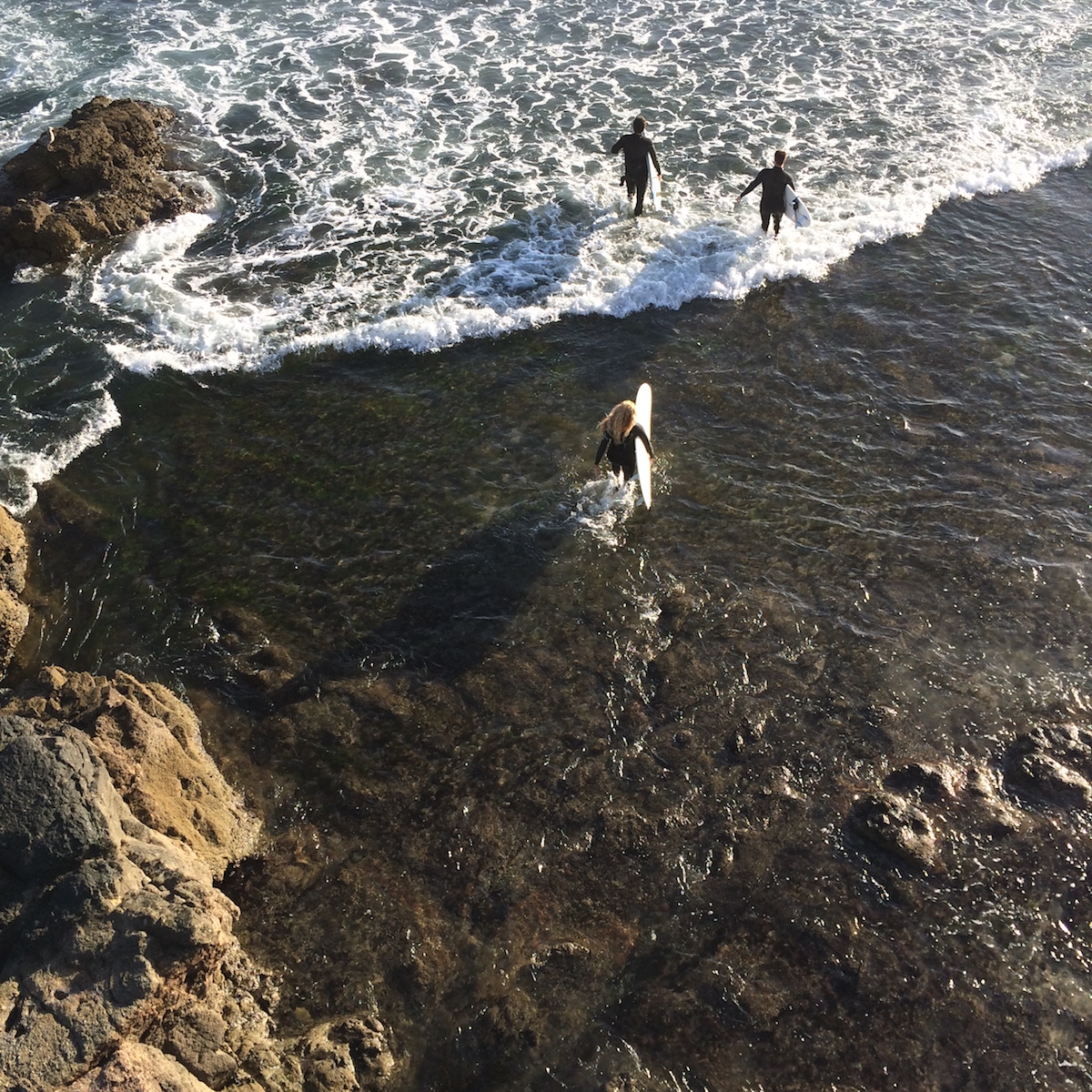 Not usually, it’s gross. Whatever the plane does to the beer, it’s usually flat or just tastes old. If I know it’s not going to be good quality, I’ll just drink a gin and tonic.

When my puppy that I was flying with had diarrhea all over the St. Louis airport, it was pretty tough. Luckily, I had my boyfriend with me, so I ran with her to animal services and he cleaned it up. I helped him a little bit.

8  Where have you and your boyfriend traveled to?

We did a beer trip to Japan. I wanted to go somewhere totally off the grid so we went to the oldest inn ever in the world, Nishiyama Onsen Keiunkan. We flew into Tokyo, and on our way to Kyoto, we went there and it was like a million trains and buses to get there and the interesting thing is it was as described, and it was built on a spring and it’s supposed to be good for you and relaxing and it was. It’s very simple, minimalist type of architecture, in the woods on a stream. People go there for health reasons so there’s not a ton of drinking. After the first night they didn’t serve beer in the restaurant or in the room, but you could buy it in the gift shop. After the first night, they had to go into some town to buy us more beer because we drank everything in the gift shop in a day.

When we were in Japan we did a martial arts school with the kung fu guys who did that whole Japanese scene with Uma Thurman in Kill Bill. I was horrible at it because it’s a lot of coordination. I’m a swimmer, so I’m kind of clumsy on land. We did kung fu and fought each other. Michael was way better. I didn’t get to wear Uma’s yellow outfit. 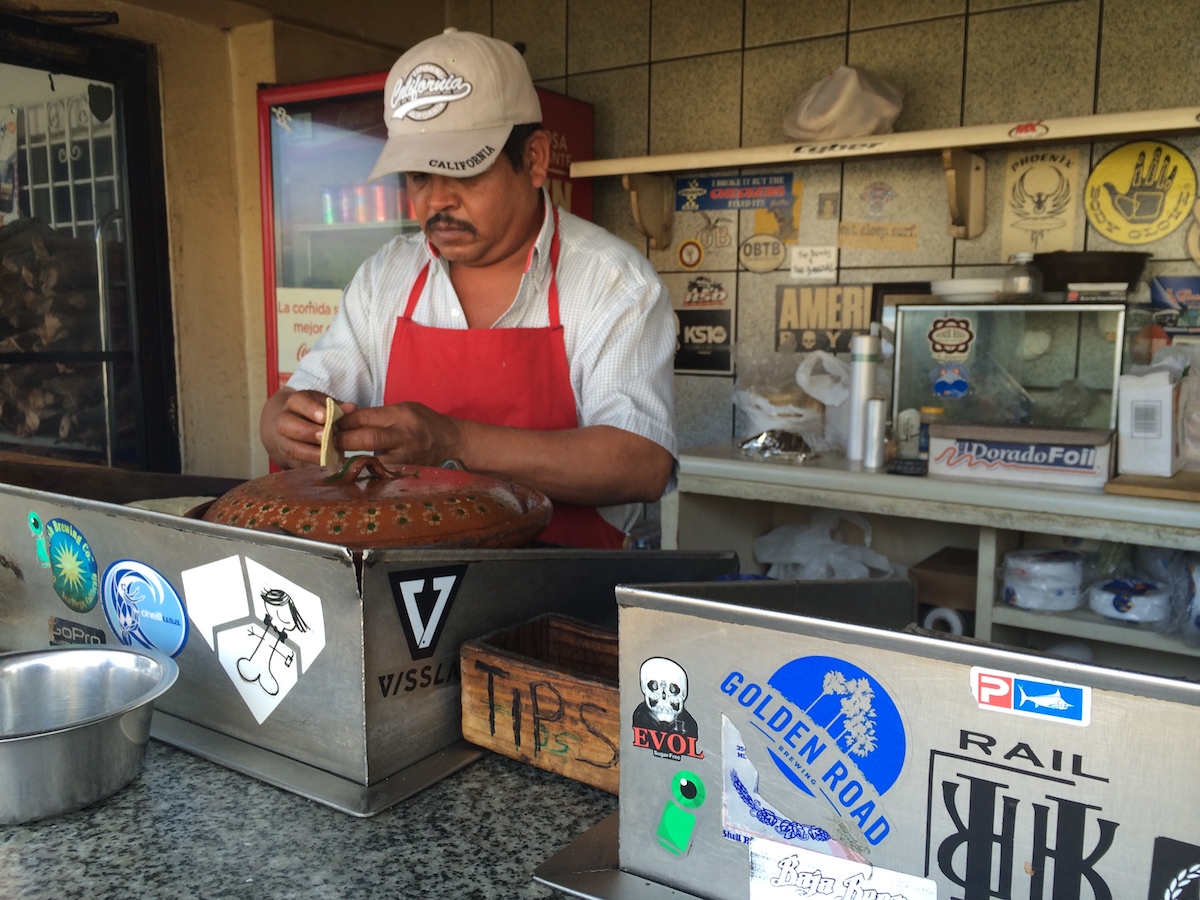 All of that surfing works up an appetite for tasty tacos

9  Is there a trip from your childhood that really stands out?

My parents had this tight connection with five other families that every wife was married to a husband that were in the same sorority and the same fraternity. And they had kids at the exact same time – not planned, it’s crazy. They all had either three or four kids and we would go to this farm on the Chester River in Maryland, that southern tip that kind of sticks out. My favorite times in my life still are being on a trailer pulled by a farm tractor with 20-25 kids on it. The dads were inside listening to Pink Floyd. It was a tiny house, we all slept in tents outside.

You walk down to the river and collect arrowheads and fish and waterski. They actually couldn’t afford a waterski early on. What they had was a barn door that they attached to a rope that they put behind the shitty boat. I was three years old and they were telling me I’m too young and then I was whining so they were like OK you can do this. Of course, you don’t have a life vest on and my dad’s like “whatever you do don’t let go of the rope that’s attached to the door.” They take me underwater and I’m too light so the wood door sinks to the ground and it’s just muddy ground so it’s just dragging in the mud and I’m not letting go. The boat stops in the water, I’m not popping up. And then I pop up. I’m fine. It was the worst minute of my parents’ life ever.

The barn door was retired. Somebody said “you know what, for a Christmas present we’re gonna get some waterskis.”

10  If you could have one travel companion, dead or alive, who would it be?

My great aunt Mimi, who died when I was in college. She was the first female manager of a bank in Virginia, grew up in the Great Depression and didn’t get to travel much. It would be fun to have her around.