A Musette bag is that rather cute accessory you’ve seen hardcore cyclists hit the road with. And sometimes something so beautifully simple can inspire something so much bigger. After collecting biking memorabilia, including more than an ordinary amount of musette bags, for over ten years, Thomas Eleizegui decided a café passion project that celebrates bikes — and their paraphernalia — is exactly where to shine his lights.

“I am a visual person so I had a musette bag hanging around, so one day my dream to opening Musette would come true,” Eleizegui says. To attract kinfolk, he had Musette Caffe jerseys and shorts made and issued –– before there was even a brick and mortar space. The demand was surging. It looked sexy, and what’s more intriguing than having to hunt out something new? Eleizegui eventually found an alley space and set up shop attracting weekend cycling warriors, but moved last year into his slick new set up that’s ready for a brunch crowd — and more. Just a short walk from downtown, it’s an onslaught of fantastical cycling memorabilia; worth perusing whilst sipping a coffee.

“The first space worked out because the alley was pretty wide and it accommodated the big group of cyclists without disturbing the pedestrians and autos,” shares Eleizegui. “Today, we moved across the street on a busy corner where we are more visual and a bigger open space.”

On the corner: Musette’s new and improved location

But, like all expansions, Eleizegui was a little nervous. “I had to make a space that was triple the size but as unique as the the original, so it was tough and there was a lot of sleepless nights,” says Eleizegui. “My dream was to have a piece of the Roubaix Stadium in there so we have a section that mimics the showers in the iconic stadium. Then there is this race dubbed “The Hell of the North”, and our patio has cobble stones as well to add a sense of the iconic race.”

“Eighty percent of my clients don’t even ride a bike, but walking in here has so much energy and history that I think an average person just comes for the atmosphere, food and drinks, and most importantly the team behind Musette,” says Eleizegui. “The other 20% are cyclists that get it, of course.” And naturally woven into this crowd are the coffee aficionados, therefore Musette gets serious and works with both Pallet, a local roaster from East Vancouver, as well as Phil and Sebastian from Calgary.

And just a few months after the big Musette, actually, just recycled their La Marzocco Linea and gave it a new paint job –– perfectly ready for the new task at hand. “We don’t pretend to be the cool and hip coffee house,” adds Eleizegui. “I think we just stick to what we can given the space the have to work with. We don’t do pour overs as it’s just too time consuming for us. Our clients just want a good coffee, or a latte, or what ever we are serving at the time. Simple.”

As much as, self-admitted perfectionist Eleizegui, admits he’s not a total coffee expert, he does take coffee very seriously and wants only the best for his café. “I love the passion people have for coffee and the science that is behind it. Every person has a different palette and it’s also how we train our palette is what makes the difference,” says Eleizegui. “I am not a barista, because I don’t have time to train for it… execution on the dialing in of the bean is most important to me; and less the latte art.”

So besides coffee and a big food selection, they also have a liquor license so customers can sit on the south facing patio enjoying a beer or wine after they have caffeinated –– or after a sweat in the Maple Leaf Canadian fresh air. “Having a retail background, I sell everything to accommodate a cyclist if they forgot something like tubes, water bottles, energy drinks etc.,” says Eleizegui. “We also sell a lot of branded items from aprons, caps, t-shirts, Brooks saddles and bags to cycling kits, and of course musette bags.”

And maybe the rest of the world is ready to don a musette bag too. “My dream is to open a café in California, but for the time being we will concentrate here in Canada and we are looking at spaces of a second location,” says Eleizegui. “Just think: Vancouver is becoming a greener city, and there is so much natural beauty here so it makes it a perfect setting for a cycling cafe.”

Make sure to visit Musette Caffe at 1325 Burrard St, Vancouver, BC V6Z 2B7, Canada or online. Take along your musette bag, and if you don’t have one, well, here is your chance now.

In Vancouver a waiter was fired for being rude. Should have been the end of the story. But, he’s French, so it’s not… 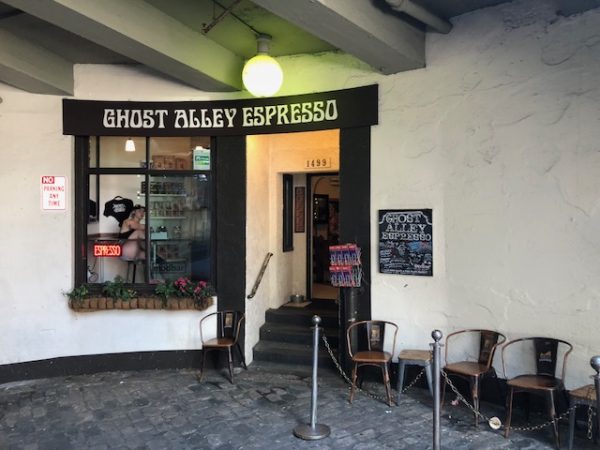