The esteemed culinary historian Laura Shapiro’s favorite place to be isn’t the kitchen, as one might have expected. What she enjoys most is camping out at her hotel base in London’s Russell Square, walking to the nearby British Library, one of the world’s largest, and spending hours amidst the archives.

Her subject is nothing less than women and food. Undaunted, Shapiro takes on this inexhaustible topic in her numerous books, articles, and as a magazine columnist, and renowned culinary speaker at venues like the annual Oxford Symposium on Food and Cookery.

Before terms like psychology or female empowerment were invented, women expressed the force of their feelings, their intelligence and their personality mostly in the confines of home and hearth. In Shapiro’s latest book What She Ate, she explores the kitchens of six famous women. For instance, we learn that both Hitler’s mistress Eva Braun and Cosmopolitan magazine editor Helen Gurley Brown tied their self-worth to 1) pleasing their man, and 2) staying skinny-slim. Dorothy Wordsworth held tight to her famous poet brother, insisting on cooking and caring for him even after his marriage. Eleanor Roosevelt was infamous, and maybe even a little proud, of having the worst food served at a White House table. She elevated women’s stature by introducing the then novel idea of Home Economics — that is, the science of food. This was a 20th century baby step that allowed women to venture into the male domain of the hard sciences.

We sat down with Laura Shapiro — at a distance — to hear her thoughts on women and food in an exclusive interview.

Your first book Perfection Salad: Women and Cooking at the Turn of the Century was published in 1986. Has the relationship between women and food changed since then?

The inequalities in the American kitchen have widened dramatically. We have farmers’ markets everywhere, organic food in the supermarket, ten zillion recipes available at all times for any conceivable kind of cooking you might want to do — and yet a lot of people spend more time watching other people cook onscreen than they do working in their own kitchens. Meanwhile there are millions of households where it’s impossible to afford even the basic fruits and vegetables that are the cornerstones of healthful eating. In both these situations, the food industry — which has gotten vastly more powerful since the ’80s — is right there cajoling us to buy ultra-processed junk instead of real food,

Could you write a “What He Ate” book?

The thing is, what has really interested me about women is how and why they cook — eating is definitely in the picture, but home cooking is what drew me to the whole subject in the first place. I’m not particularly focused on restaurants, and of course that’s where the men would be. We do see men cooking at home, certainly more so nowadays, but I don’t know –- somehow it just doesn’t intrigue me. That said, I’m working now on a book that will include some men, so I’m going to find out just how difficult it is to write about them.

Favorite country to visit for the cuisine?

India is a great food country, and incredibly varied. I love the food of the south – the dosas and uttapams you can get everywhere – and if you’re careful about it you can eat wonderful street food anywhere you go. I mentioned Goa, so here’s a perfect meal:  you walk to the restaurant barefoot, you sit under an umbrella or just in the open, gazing at the ocean, they grill a fish, they bring you a glass of Indian white wine, and you spend hours there, at the table with people you love.

You’ve said “Our food stories don’t always honor what’s smartest and most dignified about us. More often they go straight to what’s neediest.” Can you explain this?

I think everyone falls into that category, though what’s neediest is different with all of us. When you study someone’s life by looking at their relationship with food and/or cooking, you’re looking at something with a public side and a very intimate, hidden side. There was once a New Yorker cartoon that spelled this out wonderfully – it showed a couple at a restaurant table, and the waiter has come up to the table with an elaborate dish on a platter. A dagger has been plunged into the food. The waiter says, “The chef is working out some issues.” 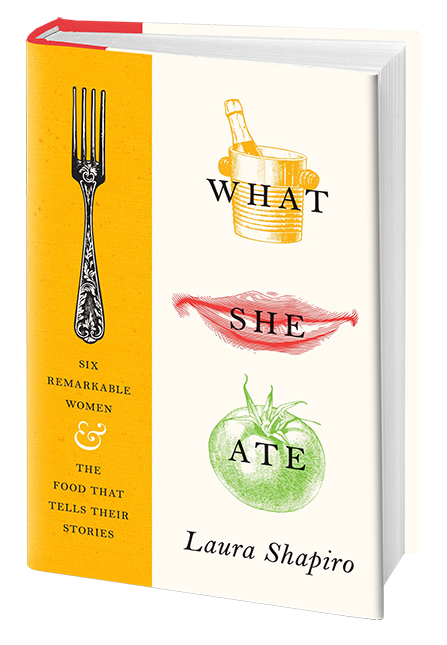 Of the women in What She Ate who would you most like to share a meal with?

I would love to have dinner, tonight, with Barbara Pym, one of my favorite writers. I would take her to a restaurant, maybe one of the Greek or Italian restaurants in Soho [in London] that she writes about, though that was 70 years ago, so I’m not sure what the equivalent would be. I guess if she offered to cook, I would accept, but she always had a cat, and I’m allergic, so I hope she would let me take her out.

Restaurant for a special occasion?

Something we wouldn’t know about you?

No dinners by candlelight. I don’t like open flames indoors. To me they spell instant conflagration and disaster. There’s no reason for this, I’ve never experienced any such disaster, so I guess it’s just a mindless prejudice, but to me it’s completely rational.

Tell us something about your own cooking habits and preferences?

Many years ago you could call someone “a good plain cook” and it would be a compliment. Okay, not a huge compliment, but it was okay, and I wish we still had it. That’s definitely what I am. I can make simple meals by following recipes, and that’s what I do. I really believe, strongly, in home cooking, but unfortunately I’m not one of those lucky people with great instincts and fabulous palates. So I make extremely easy things — all those sheet-pan recipes you see everywhere, I make those. Lots of salads, mountains of roasted vegetables, and a fairly steady supply of gingersnaps.