Here at the world’s best travel site, where we mix with the famous and glamorous in the most exotic and luxurious settings imaginable in the same way you go to Starbucks, we’re, er, not traveling. We’re grounded, flightless, rooted, stilled. We pace around our homes, wild beasts meant to roam the earth, neutered — just travelwise, I hasten to add.

I mean, we could go some places, but frankly who wants to when you’re not sure you can come back, or you’ll be cattle-prodded to some detention center for like, what, a year’s quarantine? Two years? Can they execute you for going to South Africa? (Where I personally was going, around now, and leading a WONDERLUST Trip!). And then places you think you can go on Monday are friggin’ war zones by Wednesday afternoon.

None of this is to make light of the covid crisis. It’s just that, we’re still in it. And of course, yes, people are traveling, but travel is fettered at the moment. So here at WONDERLUST World Headquarters, the general consensus is we’ll all be pretty close to home this Christmas / New Year. And that’s not terrible! 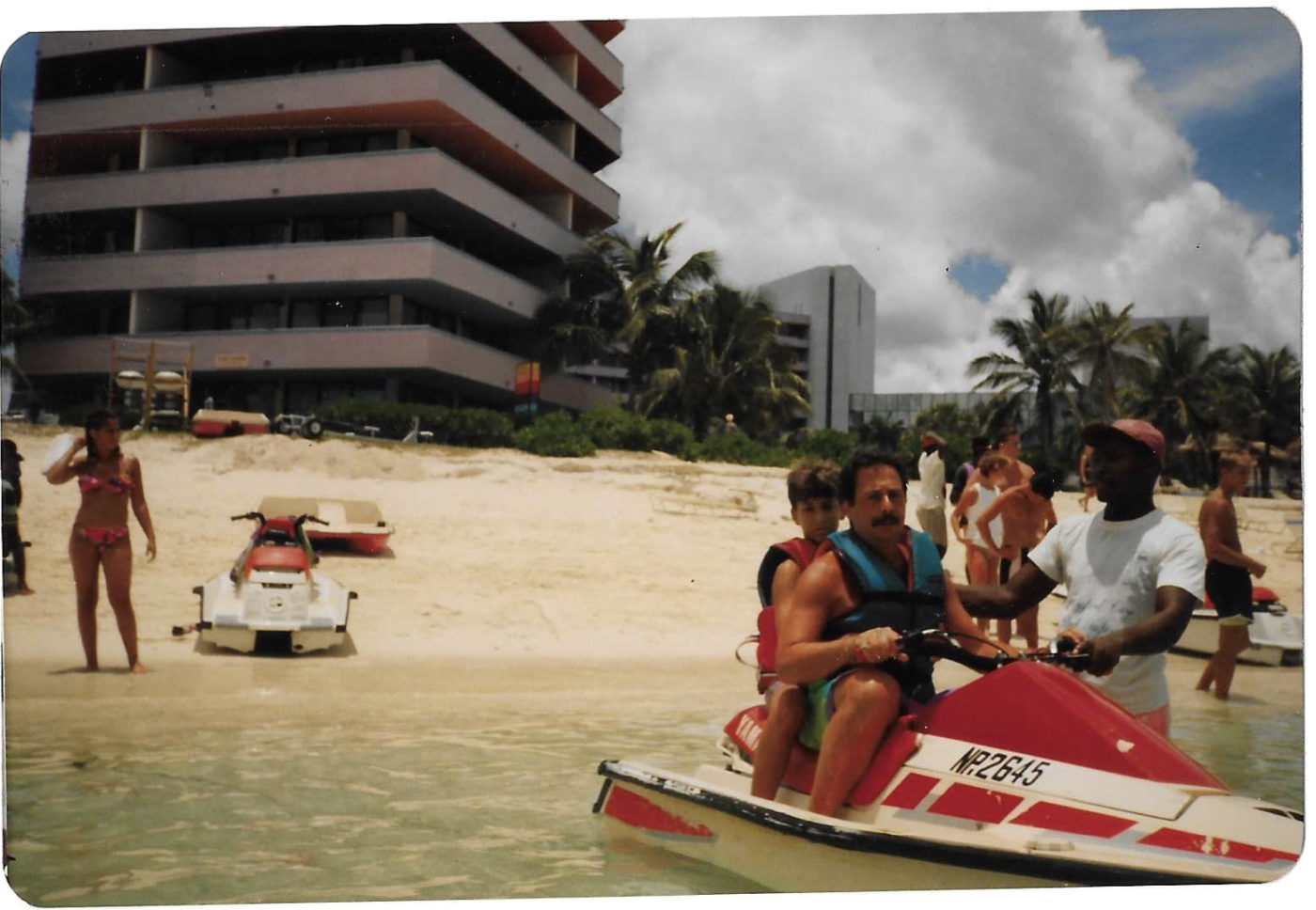 A young Jason with his father on a wave runner in the Bahamas. Legend has it, the wave runner was powered by the mustache.

Some of my fondest travel memories as a child are from winter break. From the late ‘80s into the early ‘90s, my family and I usually would go to the Bahamas and stay at the Crystal Palace Hotel. At the time, Crystal Palace and its rainbow exterior – which was opened by Carnival Cruise in 1983 – was considered one of the top hotels in the Caribbean.

The slide was epic, as so much was to this then 12-year-old in an exotic locale. We befriended two of the pool attendants, Kermit and Kevin. The latter I corresponded with through writing letters — that thing we did before electronic mail.

These family vacations were the first time I had surf and turf and baked Alaska, which we had to order at the beginning of the meal. I went on a banana boat ride and we tried one of those acqua cycles in the ocean too. These trips also exposed me to blackjack — Dad’s preferred game of chance — and slots, which was Mom’s. My sister and I would hit up either the discotheque or the arcade. Plowing through a roll of quarters playing Street Fighter and Ms. Pac-Man was my kind of sweet casino action.

It has been nearly 30 years since I was last there. Crystal Palace since shuttered (2015) and subsequently imploded (2018).

The Bahamas still has some of the most amazing resorts — from Atlantis to Baha Mar. The latter took over the space left behind by Crystal Palace. The seafood offered on these islands is uber fresh and the beaches are extraordinarily white, running parallel to the clearest and tealest of ocean water.

Coming from the frigid Northeast in December, the Bahamas was a respite, an escape to a warm and welcoming fantasy island. It’s where the locals always had a smile and T-shirts were always 3 for $10.

I don’t want to go anywhere — I want to enigmatically and physics-defyingly just arrive somewhere. At the best of times I don’t like dealing with crowded, slow, inefficiently-trafficked airports and irritable airline staffs and smug, fatuous officials who still think it’s 9/12 and they are the last line of defense against a cloud of bomb wearing terrorists bearing down on their counter. That’s at the best of times! These are not those times.

I want to be in St Martin. On the French side. At La Samanna, which I’ve been going to since the early 90s when I dated the middle one of the three daughters whose father built the hotel on a short cliff above an extraordinarily beautiful Caribbean bay, and named it after them: Samantha, Anouk and Natalie. It wasn’t very posh or luxurious then, it was just a rough jewel in a magical setting, on an island that hadn’t yet become one of the world’s most glamorous playgrounds. There was a main building and a few simple villas on the beach, serenaded by the rhythmic sea. It’s had many iterations since, spreading ever more opulently (and expensively), losing a little of it’s eccentricity, which I, sentimental fool that I am, lament.

But it’s still one of the most naturally beautiful spots in the world and the mostly open-air bones of the hotel are intact. The beach is pristine and serene, and few beaches are actually really both. They have all the bells and whistles and the obligatory water sports, but all my partner Liza and I ever want is that beach and a deckchair, and that lapping, rarely rough, sea, and someone to bring us drinks. And there is always someone to do that. 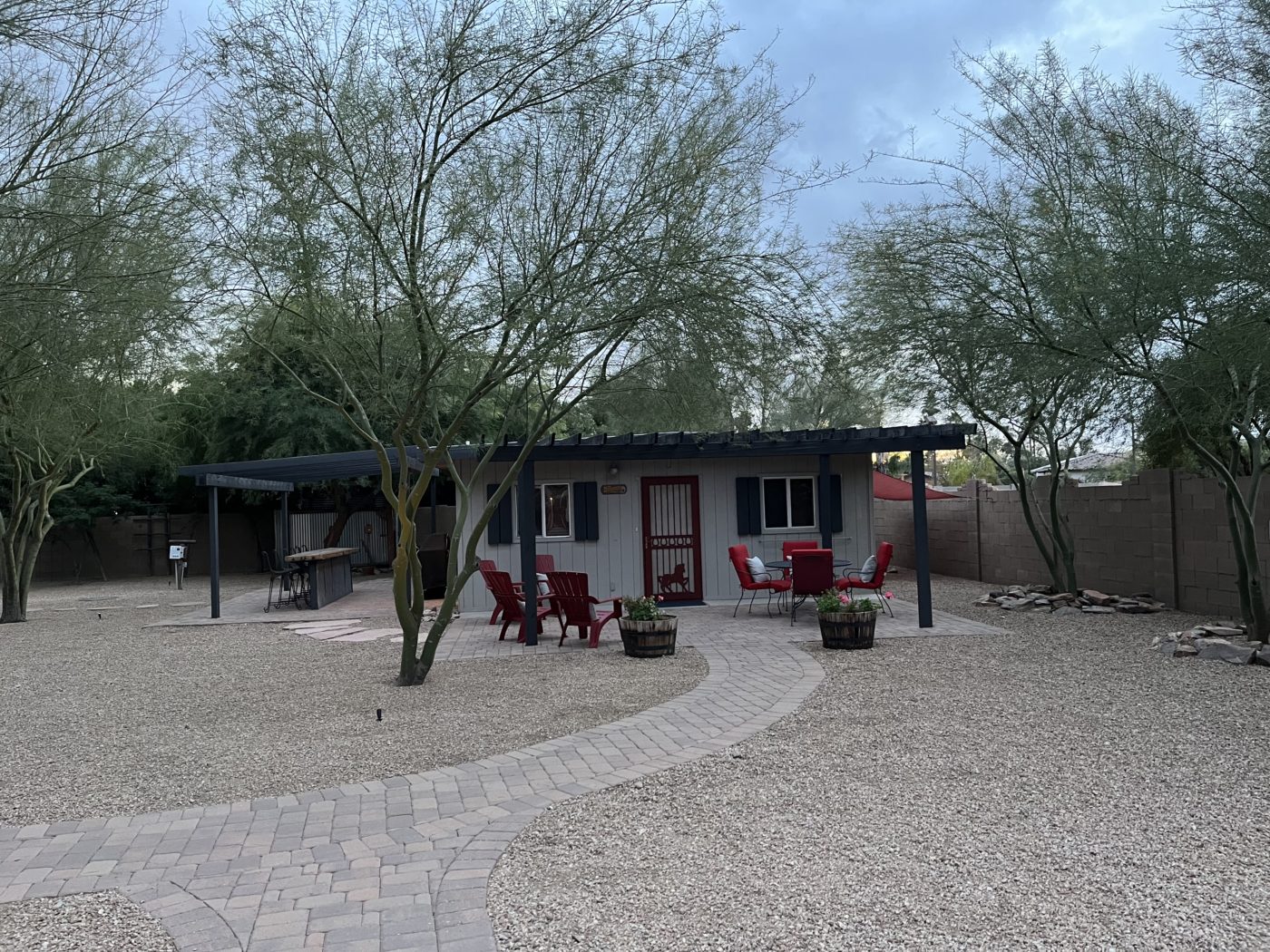 Dreams do come true. I’m on the plane right now (for real!) on the way to Phoenix. Growing up there, I couldn’t wait to get the hell out. Now I’m dreaming of three weeks in a so-called casita which is another name for a guest house. (Everything sounds better in Spanish, and French too.)

I’m ready for desert sunny days and temperatures in the 70s. BIG skies with sunsets that look like tequila sunrise cocktails. And maybe I can find a heated pool!

It seems the whole world has decided to head west if you look at fastest growing city specs, like someone tipped the continent and everyone landed in Phoenix (or Austin). Not all peeps (including me) are golf and tennis loving resort snowbirds. So who are the other millions and what are they doing there? I’ll let you know when WONDERLUST publishes “by the time I get to Phoenix” next month. 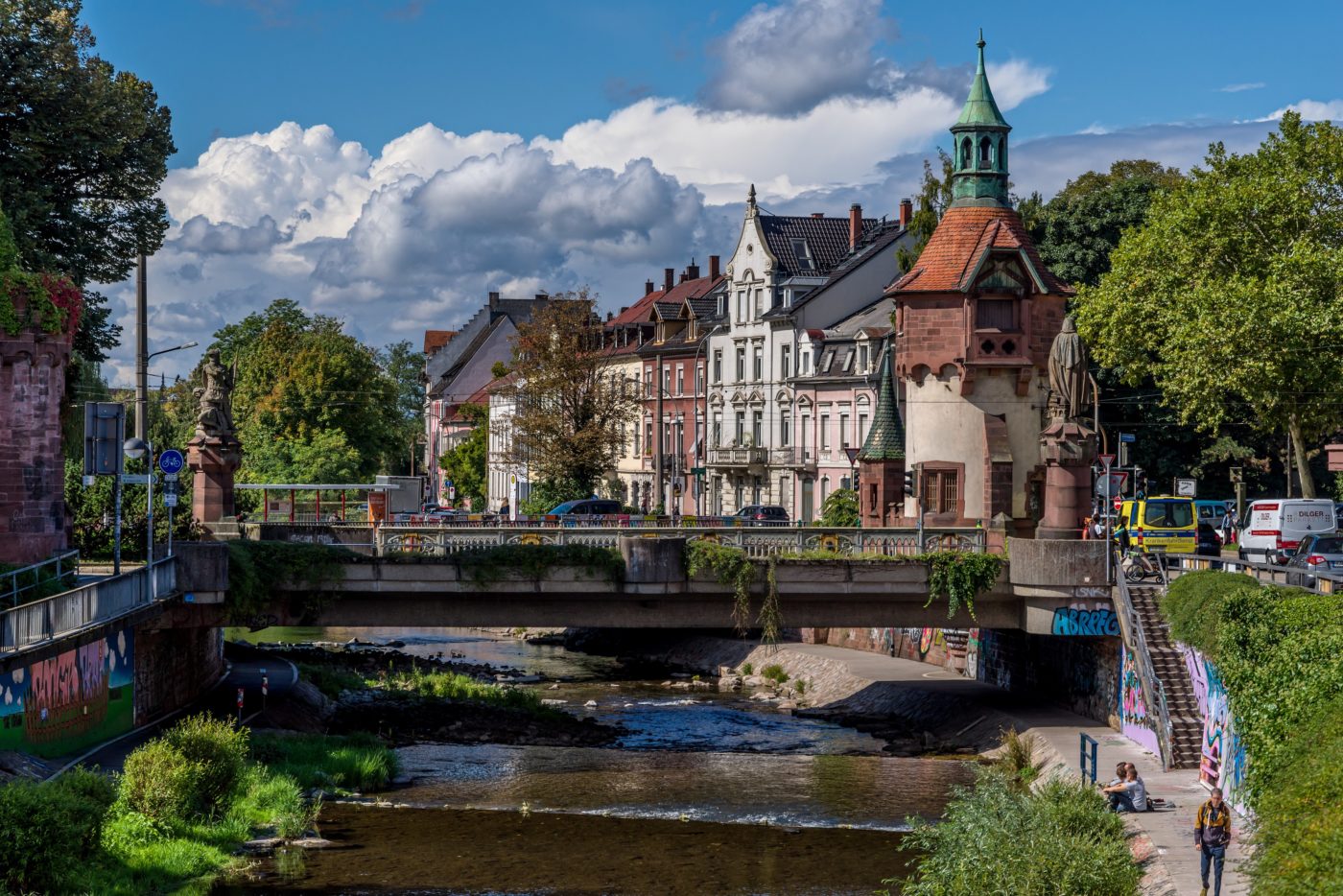 It’s been far too long since I’ve visited my ancestral country, and I miss it and the family there. This could just be nostalgia speaking, but I would give anything to go back to living on a shoestring student’s budget in Freiburg. Sure, it’s not metropolitan Berlin, or historic Hamburg, but I think the only remedy for my ever-present anxiety over impending societal collapse, is this small idyllic city in the Schwarzwald.

I need a mind clearing dip in Schluchsee, a grill in Seepark, a brisk hike up Schauinsland, and beer, lots of beer. Beer in Kastaniengarten overlooking Freiburg’s historic downtown, a beer in the basement Mudom Bar surrounded by cigarette smoke, and a beer perched on the trestles of the cycling bridge watching the sunset.

All of it is made possible by urban planning and infrastructure that prioritizes people over cars, and abounds with readily available streetcars and trains, cycling paths, and plenty of pedestrian-only zones. It’s a rare sustainable city that’s in harmony with the nature that surrounds and winds through it, and seems to me a perfect place to rekindle some optimism. 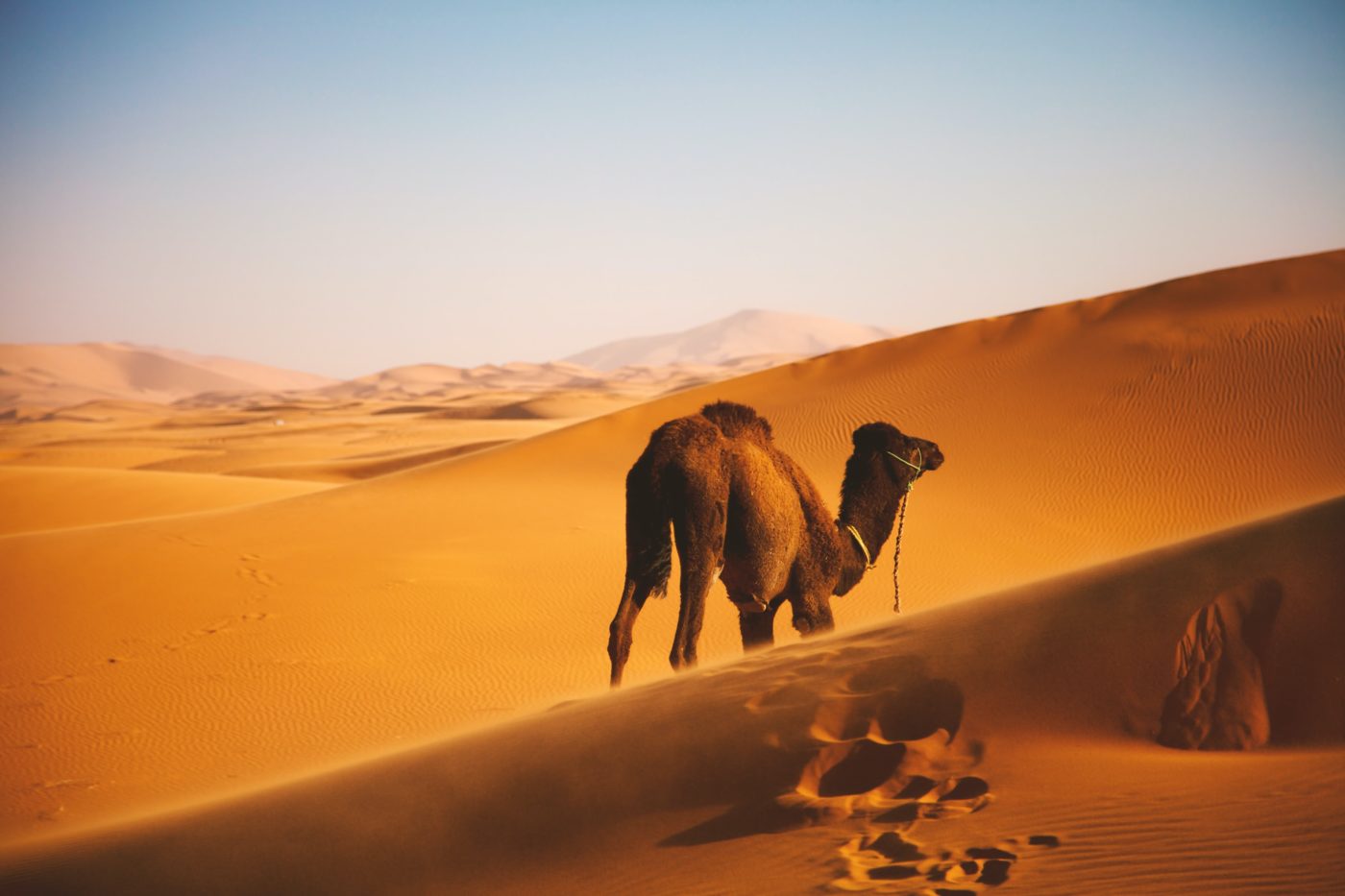 My camel is waiting

I want to go to Marrakech, North Africa and melt into a spa, becoming one with the surroundings of marble and sand.

I want to be covered in musk clay and dried roses, and then exotic oil with knowledgeable hands winding out my knots of intrusion. Then I want to be swathed in comfortable kaftans, a camel between my legs and dunes before my eyes. A bedouin tent awaits in the distance and a fire and Moroccan music and celebration, that we are here and we have made it this far, together. And under a trillion stars I’m fed fat juicy medjool dates and mint tea.

But alas it’s all a mirage. As of writing everyone is banned from Morocco for the next two weeks, and after that the requirements are so eye wateringly sticky getting out again once you’re in. My camel will have to wait. 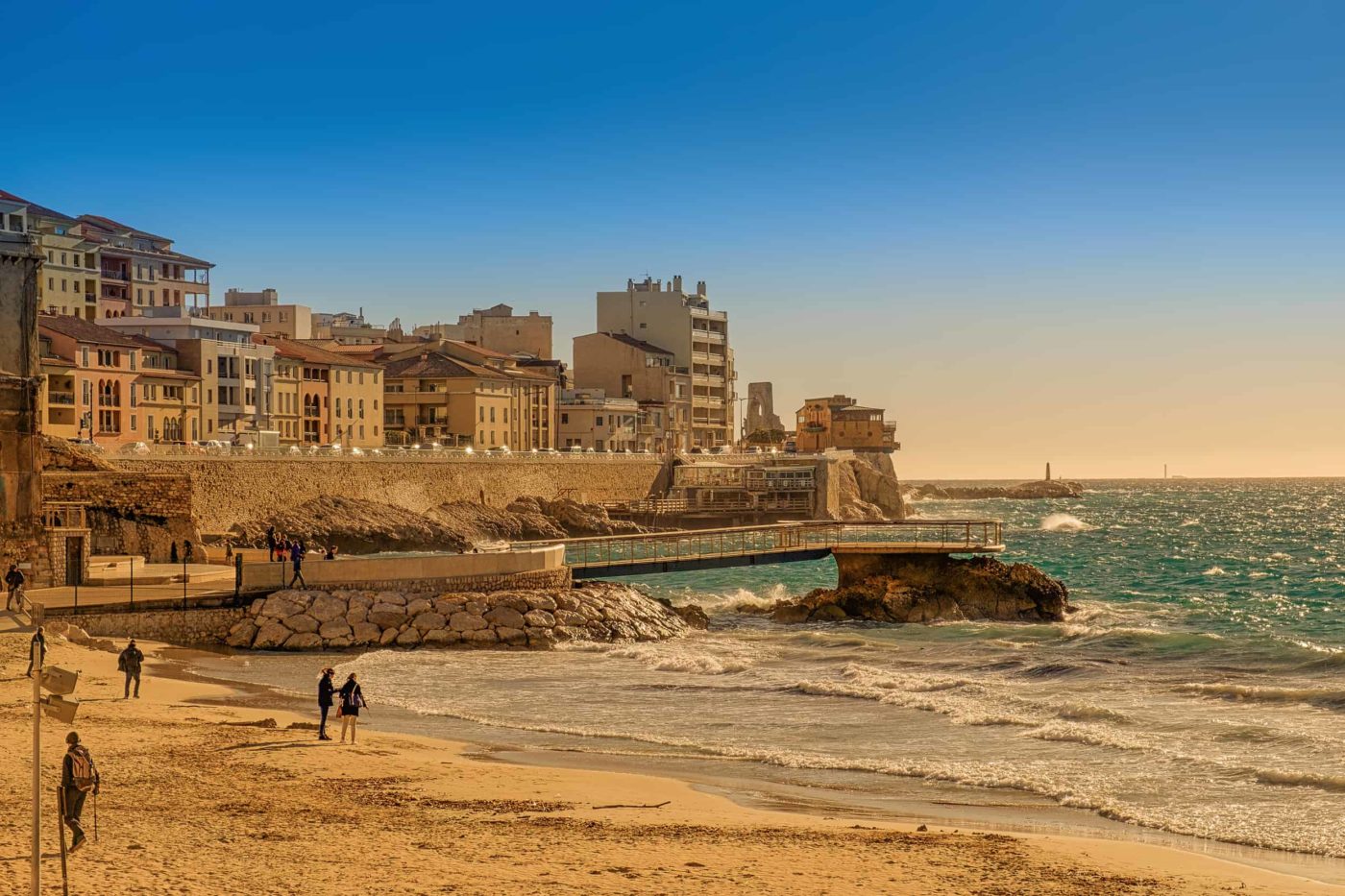 A white Christmas is lovely when you have a lovely warm fire to curl up in front of and you can look out the window. This Christmas, though, I would like to be anywhere in the world where it is 80° F (26° C).

From 2002 to 2006, I lived in Auckland, New Zealand. I owned and ran a restaurant that was on the beach, and on Christmas Day we had a private party for friends and family at the restaurant. My chef, bless him, did all the cooking. He said no one else was going to cook in his kitchen! So, Auckland is one consideration, but (oh yes there is a but) I live in Marseille and to get there would require two 12-hour flights. So that means wearing a mask for at least 30 hours!! Yeah, nope! So North Africa maybe? Egypt and Luxor look promising but I don’t know anyone there.

And Christmas is family. My son and grandchildren are here in Marseille. We get 300 days of sunshine per year – it will not be hot, but I will be on a beach. The sun will be shining and I am sure I will be warm. So I guess I’ll stay here.

Or I could join Lucia in Marrakech!