Even though I have walked the floor of the MGM Grand in Las Vegas dozens of times, always in pursuit of the same game, I am lost. I flag down a custodian wiping down a glassed-in poster for Brad Garrett’s nightly comedy show. No help.

After circling back a few dozen times, I stumble upon what I’m looking for. Toward the back entrance, next to the toilets. Right where I remember it!

When people ask me what I play in Vegas, I always tell them “the horses.” They picture me nattily dressed, reading the daily lines from a crumpled-up newspaper, picking my parlays based on hidden meanings in the horses’ names. Maybe there’s a stogie smoldering in a nearby ashtray. In reality, I play a mechanical game that’s been nothing more than a novelty for close to 40 years.

The Sigma Derby is a large console — roughly the length and width of a professional billiards table — that houses a miniature horse track. There are five horses — three white, two brown. Their names hold no hidden meanings. Also, they could each use a fresh coat of paint.

The game is simple: pick two horses that will finish first and second. There are ten different combinations, with different odds for each. I park myself on a stool, dig into my MGM souvenir cup of quarters and place my bet (50 cents) on horses 2 and 4. 4-1 odds. 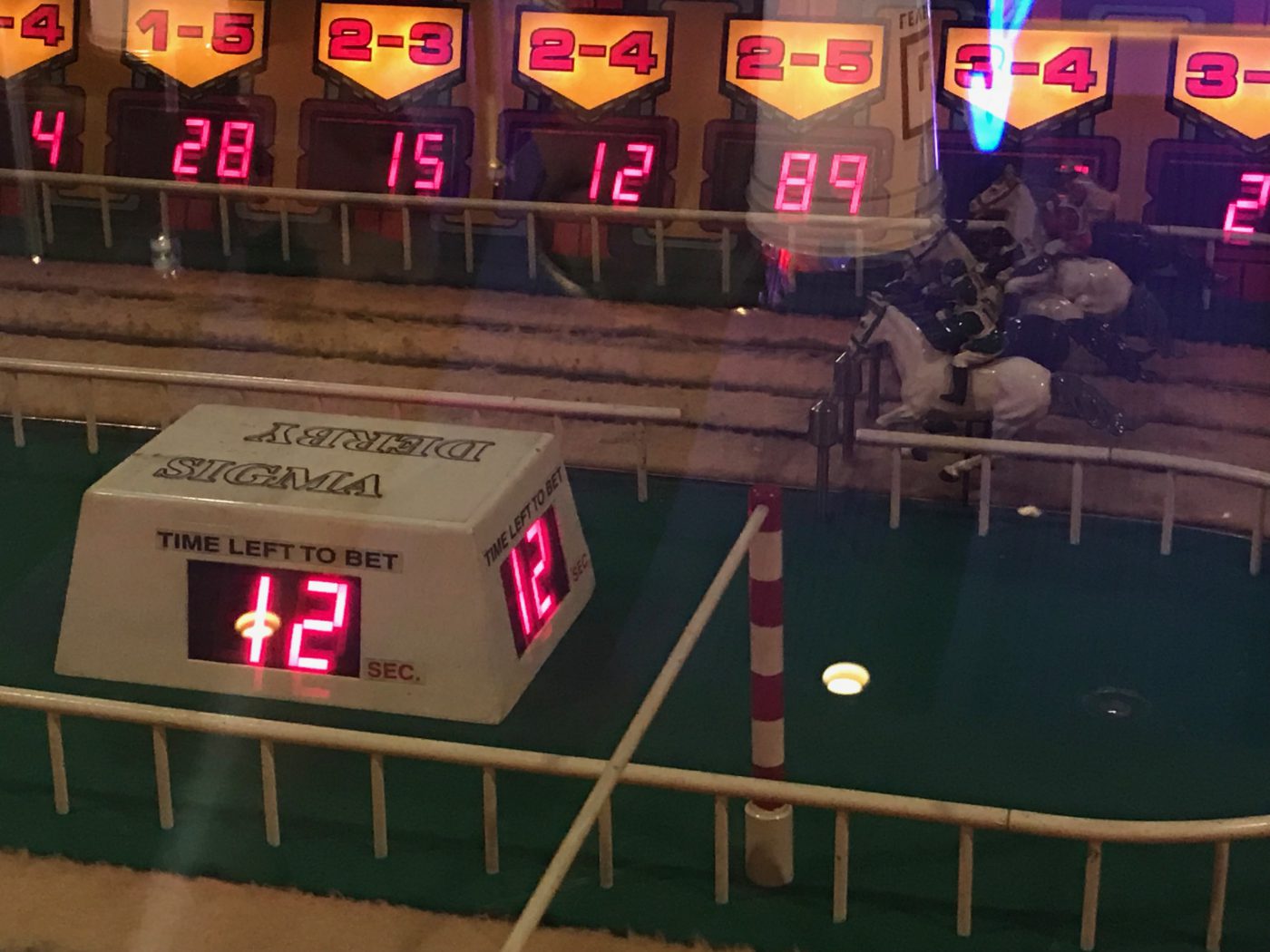 The horses trudge to the starting gate. The countdown clock hits zero. They’re off! Sorta. It’s not hard to follow the action here. No need for binoculars. These steeds move at a bruising speed.

Both of my horses take an early lead and I’m looking at a nice dinner here (they still have 99-cent prime rib, right?). Number five is coming up fast on the outside track, neck-in-neck with number four. The large Latino gentleman sitting next to me seems awfully excited about t.

“C’mon, 4-5! 4-5!” He yells. Repeatedly. Right into my ear. His gold chain is bouncing off his chest, lock-synced with the canned sound effect of (much faster) horses’ hooves. The excitable boy gets his wish. The winners, at 14-1 odds, are horses 4 and 5. So long, prime rib!

There are two remaining Sigma Derby games in operation. One is here at the MGM. The other is located a few miles away at the D Casino on Fremont Street. Over the years, downtown Vegas has morphed into an idiot child of Bourbon Street and Hollywood Boulevard. Cheap drinks, panhandlers in Spiderman costumes, zip-lines, U2 cover bands. Pass.

The horses are back at the gate. I let it ride and drop eight quarters on horses 2 and 3. 135-1 odds. I’m no beautiful mind, but I know that if these thoroughbreds come through I might earn myself a night in the penthouse. Or at least score tickets to that Brad Garrett show.

Excitable Boy is joined by a friend who has made some interesting facial tattoo decisions. He arrives with two rum and cokes, because that’s what friends are for. Meanwhile, I’m looking around for a non-existent cocktail waitress. I sure could go for an O’Doul’s.

I’ll spare you the drama: my horses lost. Not even close. Excitable Boy and Tattoo Face don’t win either. The glory goes to a young couple, now sharing congratulatory smooches. “We’re a pretty good team,” the gentleman says. I almost vomit in my quarter cup. It’s 70 secs until the next race. Where is that cocktail waitress? I have to stay sober, but not that sober.

New strategy: play the whole field. I insert a bunch of quarters and place bets on multiple combos. I just want that feeling of winning. Even if I end up mostly losing.

Tattoo Face taps his friend on the shoulder, shows him something on his phone.

“Oh ___” Excitable Boy says. They look at each other, gulp down the rest of their drinks and split. I look down at the far end of the table. The lucky lovebirds are also gone. It’s just me and the horses. 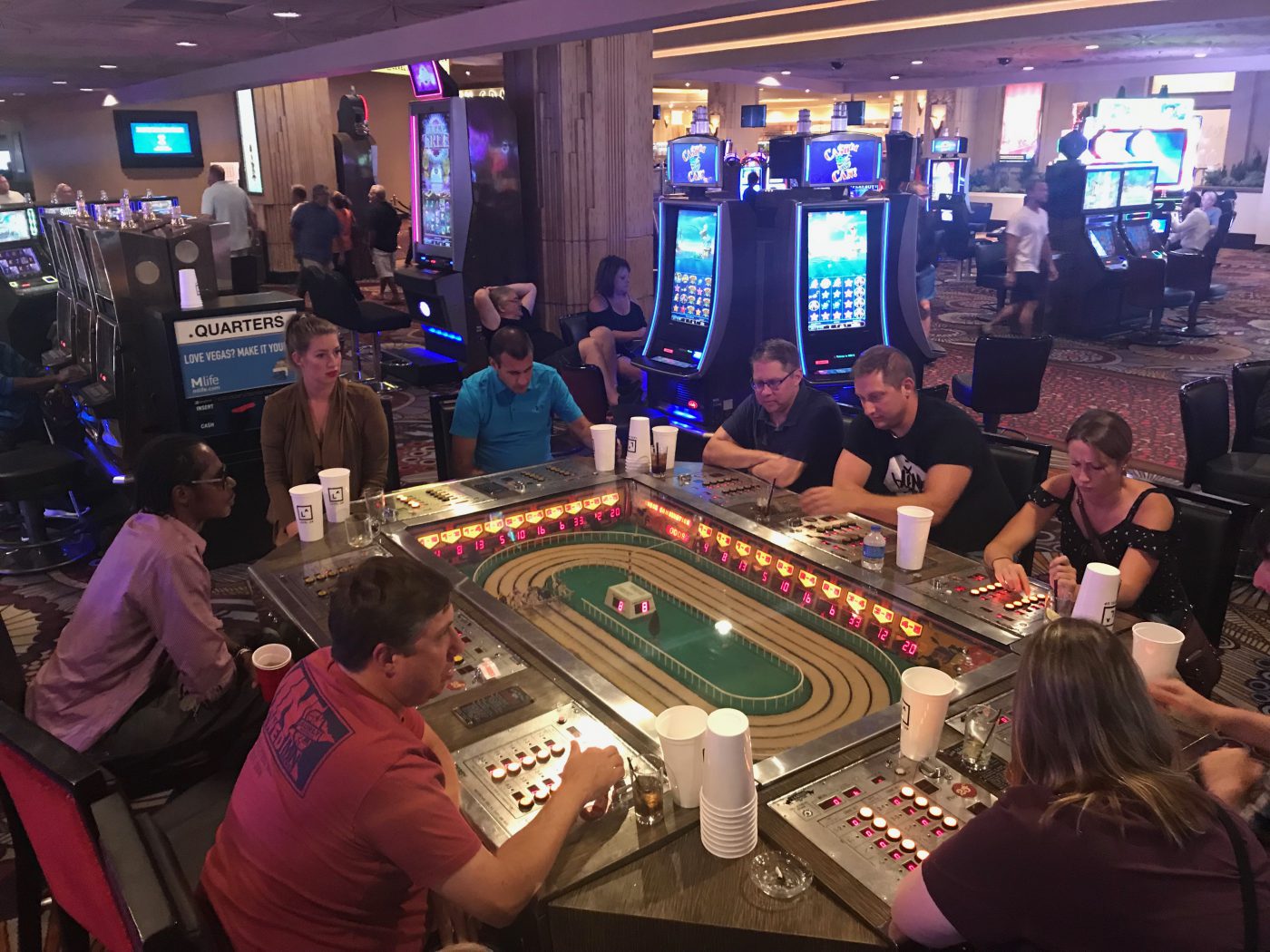 It’s much more exciting, and addictive, than it looks. The enigmatic Sigma Derby

Horses 1 and 4 win. The one combo I didn’t bet on. I reach back into the cup. Funds are getting low. There’s a ten-spot burning a hole in my wallet, so I walk to the cashier gate.

I’m going against the grain. Everybody is walking in the opposite direction. Just my luck! I spot not one but two cocktails waitresses. Both blonde. Both carrying their drink trays under their arms. I interrupt their conversation. O’Doul’s please.

“Sorry, we’re not exactly serving at the moment,” says one blonde. The other flashes me a nervous smile.

I notice Excitable Boy and Tattoo Face leaning against a wall, still occupied with TF’s phone. “Yo, this ____ is crazy.”

It’s October 1, 2017. Which holds two distinct meanings. First, it’s my birthday. Not that it matters to you. Or my parents, who forgot to call. Second, about half a mile away, a 64-year-old retiree is committing the worst mass shooting in U.S. history from the 34th floor of the Mandalay Bay Resort. The news is coming from every TV screen above every bar, from the mouths of every gambler, from the phones of two friends who enjoy rum and cokes.

The two blonde cocktail waitresses hug, tell each other to stay safe. I glance back toward the wall. Excitable Boy and Tattoo Face are gone as well.

I figure it’s a good time to cut my losses and use that ten for a cab back to the Westgate. I interrupt the cocktail gals one last time asking for the nearest exit. They point me back in the direction I came. Toward the Derby.

It’s mid-race. Nobody is playing. I dig into my pocket. One last quarter. I sit and wait for the next race. I check my phone. There’s talk of a bomb at the Luxor, a second shooter at New York, New York. Both turn out to be fake news. Though in the moment it sounds like Vegas is under siege.

Hordes of people pass me, on their way to the exits. Most seem concerned, though nobody has reached panic mode. Yet. A pair of upscale urban cowboys prod their inebriated wives along; a bachelorette party does a quick head count…where’s Mindy? A group of elderly Japanese tourists are the only ones entering the casino. Completely oblivious to the situation at hand. Welcome to America.

Both horses take a commanding lead, but I’ve seen this movie before. I know how it ends. I get up and leave, not even sticking around for the credits.

I walk over to the nearest bar. I still want that O’Doul’s. Bartenders close out the remaining tabs, a few lingering customers keep their eyes glued to the TVs. Reports say two people dead, hundreds more injured. The camera is focused on the Mandalay Resort. Next door is the Luxor. No sign of any bomb going off. Some good news, at least. One angle shows the top of the MGM, reminding how close I am to this carnage. Even though this is all happening a few blocks away, it feels like I’m watching a movie, a bad one. One that I’ve seen far too many times. Probably starring Bruce Willis.

The gentleman next to me in an Old Navy T-shirt tells a buddy and his buddy’s girlfriend that he wouldn’t be surprised if the shooting was “a liberal conspiracy.” How badly do I want this O’Doul’s?

The floor is mostly empty now, except for those Japanese seniors. Some sit at the slots. A few try their luck at the blackjack tables. You don’t leave a hot table.

The taxi depot is overloaded. I step out onto South Las Vegas Boulevard and walk toward the orange neon glow of the Hooters Casino. There’s an ambulance out front. It’s not related to any shooting. Somebody got gutsy and had the Three Mile Island wings. Poor bastard.

I finally get a cab. “To the Westgate,” I tell the driver. The CB radio is a cacophony of distressed drivers advising each other which streets to avoid and where people need picked up. The airport is on lockdown.

We move at a bruising speed. Traffic is jammed up. A cavalcade of police cars and fire trucks weave between the stock-still vehicles. My eyes gaze out the window, at the blinking lights, the gaudy billboards, the marquees inviting me to come inside and press my luck.