It’s all about connection for Christopher Joe, the owner and operator of a tour company on his family’s farm in the Black Belt region of rural Alabama. Keeping his family connected to their land and history, connecting the descendants of area farmers who sold their land with fond memories of their childhood, and most of all, facilitating a connection with nature.

“I don’t like people to feel rushed,” he says about the access he provides to their 200-acre Black Angus cattle farm through experiential tours. “I want you to take your time, enjoy what you enjoy. If you want to sit on the edge of the field and look off into the distance, you can do that.” It’s why he went so literally with the name of his operation: Connecting with Birds & Nature Tours. “Connecting with the healing power of nature is a big part of it.”

Another big part of it is sustaining the farm itself through land management and diversification of income. In the economically challenged Black Belt region, maintaining ownership of the family farm is rare these days, especially for Black families.

Located on the ancestral land of the native Muscogee people, the “Black Belt” term for this region originally emerged in the 1830s as a reference to its rich, fertile black topsoil, conducive to growing cotton. It’s also a reference to the region’s majority-Black population, a legacy of the plantation economy that depended on the unpaid labor of enslaved African people working in fields and the riverboats, building generational wealth for white landowners on the backs of the people doing the work. 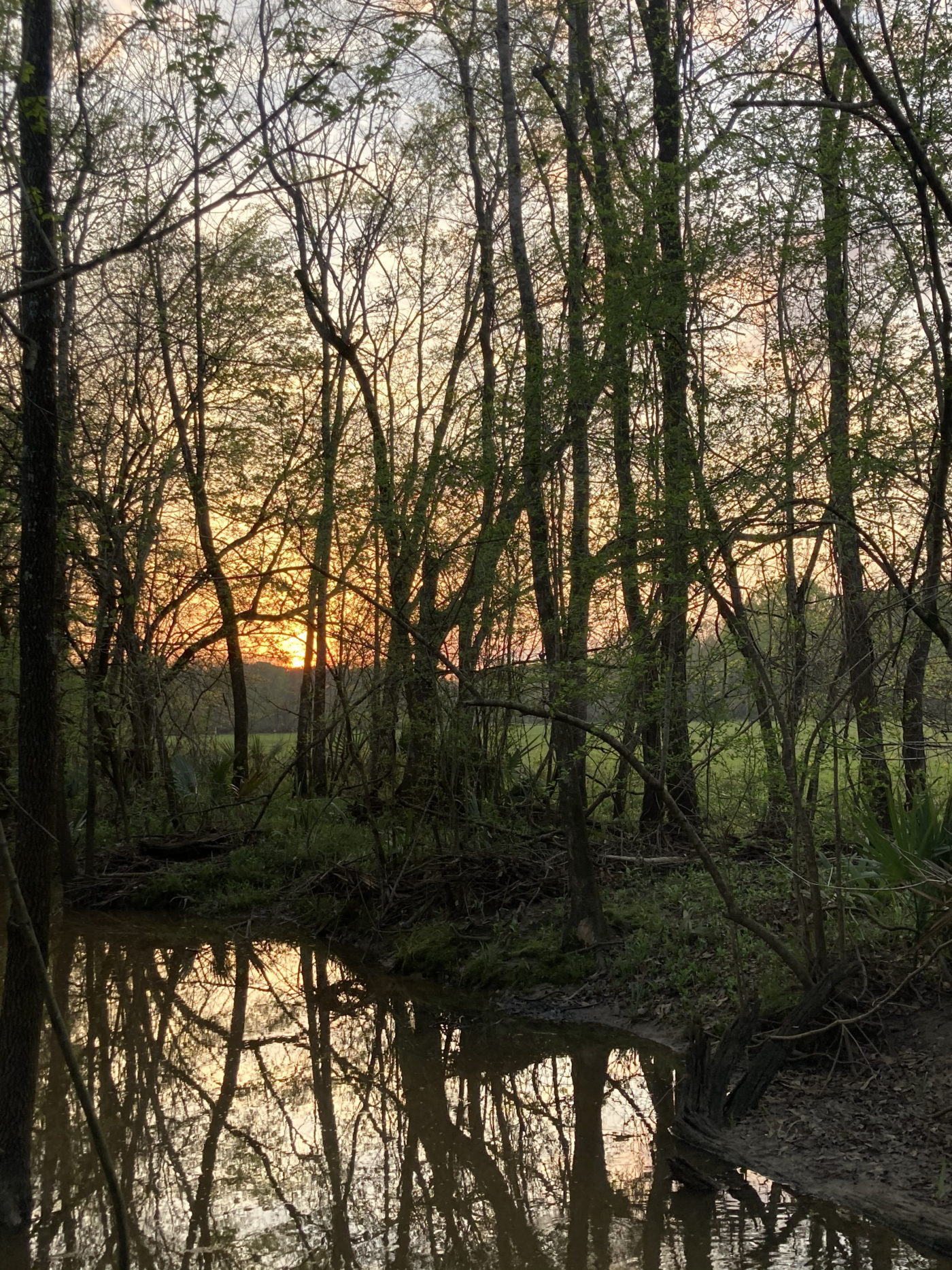 After emancipation in 1863, many of the formerly enslaved people lived and survived as sharecroppers and tenant farmers. Some were eventually able to purchase and live on their own land as free citizens, as Christopher’s great grandparents did in the early 1900s. They supported themselves by growing and selling vegetables as “truck vendors” in the local town square. Other relatives lived on adjacent farmland raising hogs and cattle, and they traded goods like smoked meat and yard chickens. His father Cornelius went straight to raising Black Angus cattle when he took the land around 1989, and Christopher and his three siblings grew up working alongside him.

Nowadays, there are only two or three Black-owned working farms in the surrounding 30-mile radius of The Joe Farm. The younger generations of farmers aren’t usually taking over the operations, and the property is being sold. “The history gets lost when the grandkids can’t come back to the land that their grandparents owned,” Christopher says. “This is what you lose when you let go of land.” He imagines it must be a deflating feeling “to work your whole life to make something and no one wants to take it up from you.”

An avid outdoorsman, natural-born networker, and professional conservationist with the USDA, Christopher has furthered sustainable practices on the farm through grants, programs, and certifications for wildlife planning and habitat management. 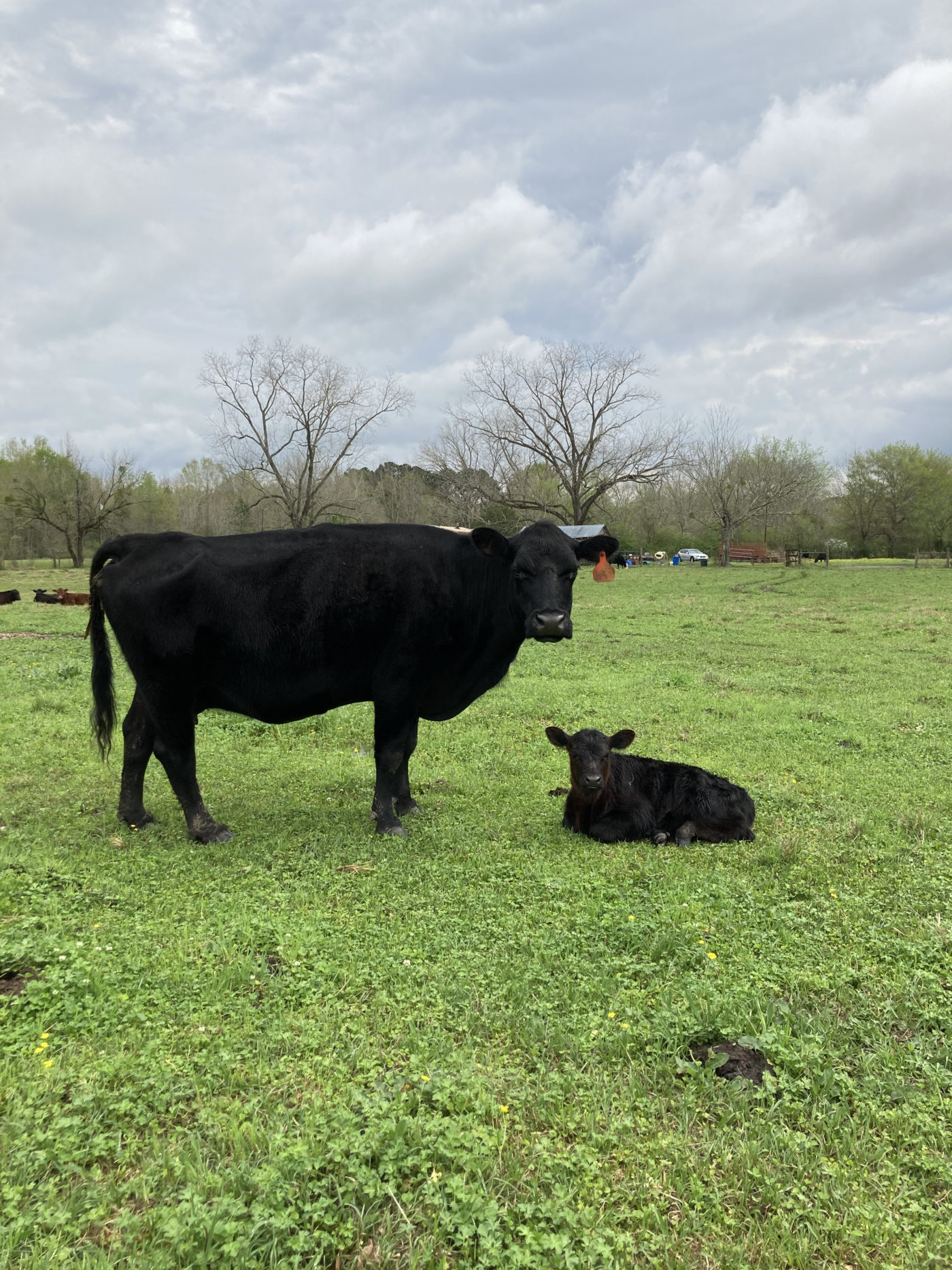 You looking at me? ***Tami Fairweather***

The idea to host tours came after he reached out to the tourism department at the University of Alabama when the professor he showed around suggested that there was enough land to develop a type of eco- and agri-tourism product, birdwatching in particular.

What he hadn’t realized was that with little public land in the area, recreational birders had been parking on the highway for years, pulling out their binoculars to watch the birds feeding on the uprooted insects when the Joes were cutting hay. He learned this two days later when he met with the Alabama Audubon about their Black Belt Birder initiative. They quickly formed a partnership to launch and promote his first birding tour for February 2019. 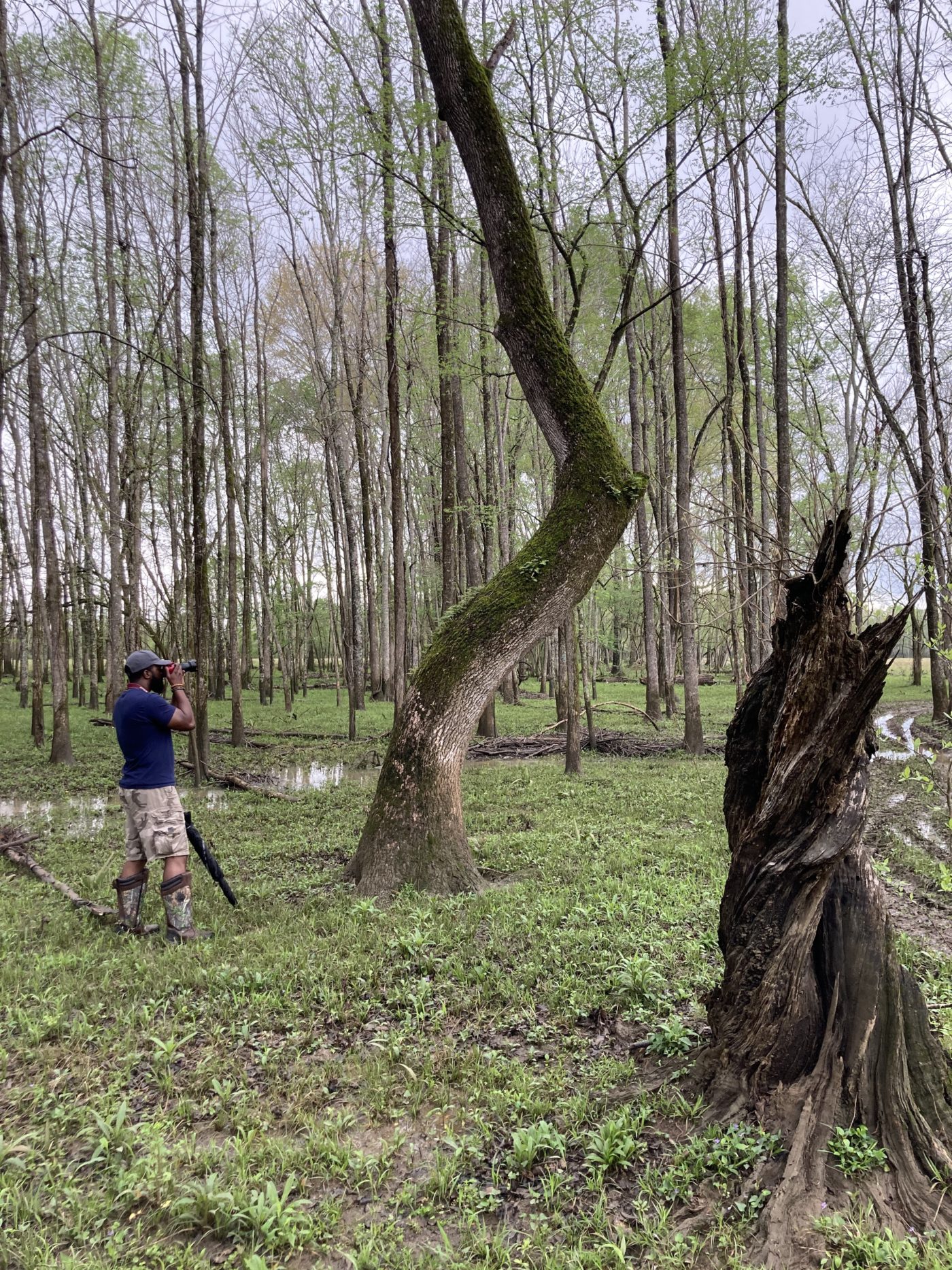 While rural Alabama is popular for hunting and fishing, there is a growing demand for active and nature-based outdoor recreation, one that Connecting with Birds & Nature Tours is meeting, and scaling quickly.

Christopher was recently named to the advisory council for the Alabama Black Belt Adventures Association (ALBBAA), a non-profit whose mission is to promote outdoor recreation and tourism to the region, including watersports, birding, hiking, and cultural heritage assets like Native American sites and U.S. civil rights history. Pam Swanner, ALBBA executive director, says “the development and marketing of active adventure is a priority for us to reach a broader audience,” one that will help the economy enough to sustain the region’s residents and communities.

“What we’re doing is on the frontier of tourism around here,” Christopher notes. “We’re opening up for a whole lot of people who love the outdoors and want to experience it in a different way.”  In addition to birding-focused events like a fall festival, a summer bird count, and school groups, he’s also hosting equestrian riders, mountain bikers, and tent campers–all based on what people are asking for.

Camping is what my friend Mika and I asked for, and when we arrived after a long drive from New Orleans, his mom Leola was there to welcome us. She identified the different birds feeding around the farmhouse, showed us the wall of family photos inside, and shared the story of how she and Cornelius met (it was a setup, and it was love at first sight). We ate sandwiches made by Christopher’s brother, saw the landscape and bird paintings created by his other brother, and hitched a ride out to the designated campsite on the tractor by his dad. After a peaceful night under the full moon and a refreshing morning thundershower, we explored the property on foot with Christopher’s guidance, while he answered a lot of questions we had about the vegetation, the history of the land, raising cattle, and birds, of course.

“We offer a personal touch,” Christopher says. “How many places can you go where the landowners are taking you around to give you what you want? We’re hands-on. You see us, you get to know us.”

Most people get to know Christopher virtually first, as much of his marketing is done through social media. That’s how Atlanta resident Marionette Audifferen and her friend Sarita from nearby Montgomery, AL ended up being the first-ever camping guests on the farm the same weekend we were there. An experienced camper and hike leader for GirlTrek and Sierra Club, Marionette discovered Christopher during virtual Black Birders Week 2020 and started following him on social media. She hadn’t seen many Black people doing birding and had never been on a bird tour herself. “As I watched his video on YouTube, I said to myself ‘This guy is legit!’ and really into getting folks to experience the outdoors.” She reached out to him to discuss binoculars and ended up scheduling the campout along with a tour. She’s already scheduled her next visit. 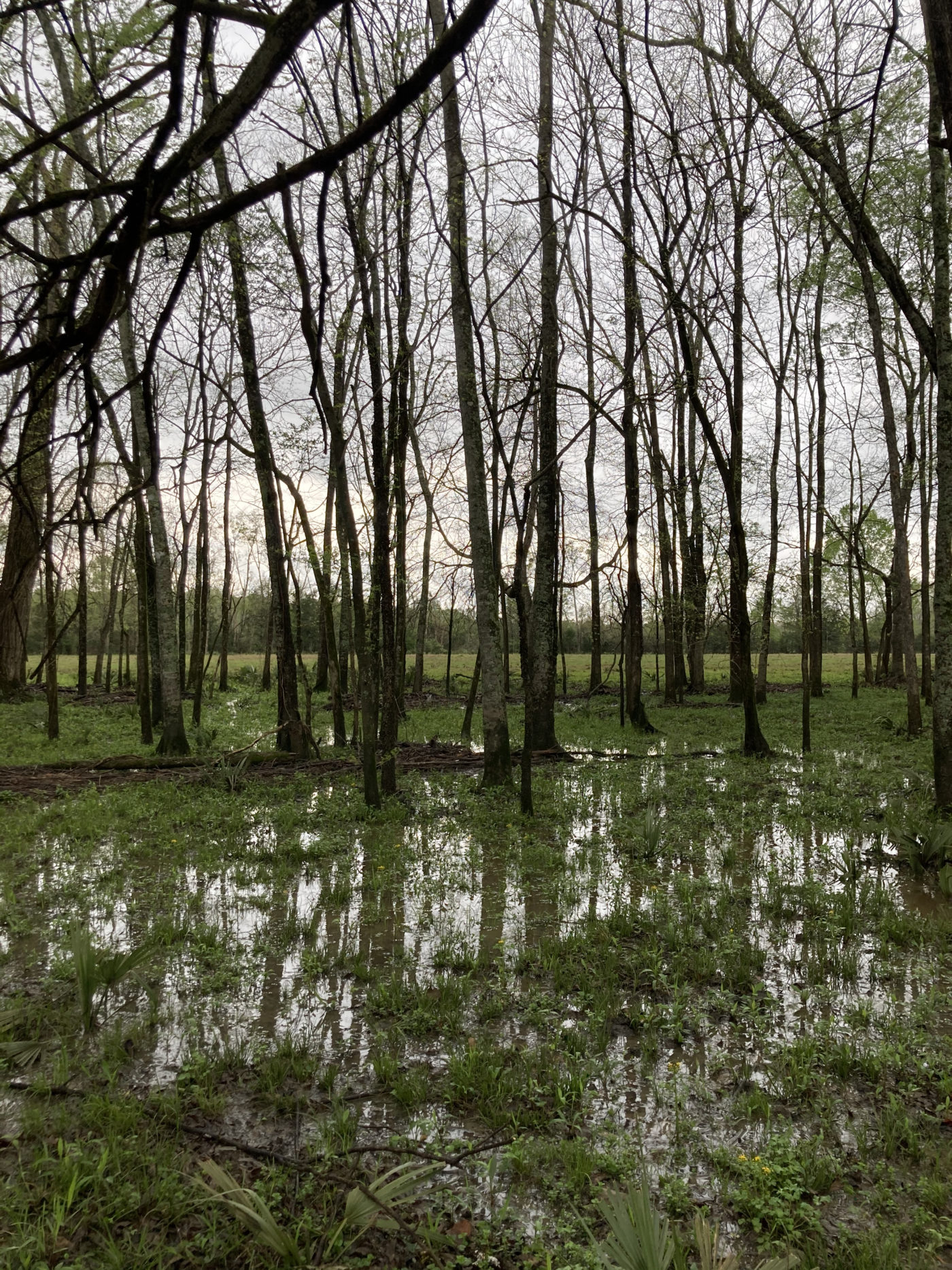 Christopher’s tours are not centered around Black history, though it comes out through natural, easy-going conversations with guests. He says he didn’t set out to be the first Black person in the area to do this but recognizes that he’s become the face of something that’s not regularly seen in a predominantly white U.S. outdoor and adventure travel industry.

He also feels like he’s opening the door a place most people have never been. “I’m just ecstatic that we can offer that to people, and that they feel welcome, cause that’s the main thing I want people to feel, is that they are welcomed on our property.” His dad is especially enjoying the social aspect of the tours, Christopher says with a laugh. “He tells me that he’s never had anyone watching him before, it’s normally just him and the cows.”

His advice for budding adventure tourism entrepreneurs? “You’ve got to just start. It’s easy to talk yourself out of it, but if you start reaching out to people to get the thing rolling, it will click.”

The success of the operation makes him feel good that he’s doing something sustainable with his family land so that it can be passed down to future generations. “If I never have another tour, the fact that we’ve had over 300 people visit since this first started–seeing the land that my great grandparents started–that’s a rewarding feeling enough for me.”

“Something else might grow up out of what we started,” he says, meaning future generations could go back to vegetable farming, and that’s up to them. But for now, the whole family enjoys this tour operation, meeting people, and sharing the healing power of nature with others.

In Praise of Tomatoes 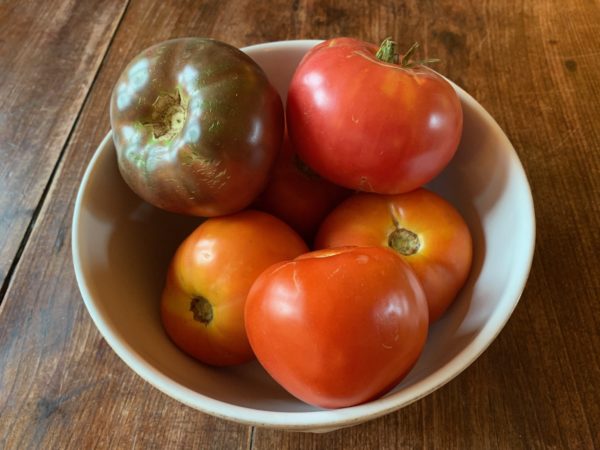