Let me guess, you were curious, right? You thought to yourself, “Maybe this is the plan that’ll finally work for me!” or “She’s never talked about weight loss before, but hey—who knows???” Well, you’re right on a few points: I know nothing about weight loss beyond, like most women I know, my life-long personal struggle; and what I have to say will definitely work for you.

But, you can’t say I didn’t warn you—it’s not what you think.

Most online media (yes, with a header just like mine!) is designed for clickbait. Writers are encouraged to get you to open an article, many poorly researched and irresponsibly written, merely to build “views” to make ad money. According to MarketResearch.com, the weight loss industry grossed an estimated $70.3 billion in 2018. All centered around the insecurity that you—no matter how you look, feel and live—need to lose weight.

Feeling angry? Good. Now get ready to get furious.

According to an August 2017 USA Today article, Weight Watchers revealed a $45.2 million profit in their 2017 second quarter. The result of, according to WW CEO Mindy Grossman, ”the broad-based improvements the company has implemented, including updating the program, enhancing the digital offerings, and refreshing the meetings experience.” 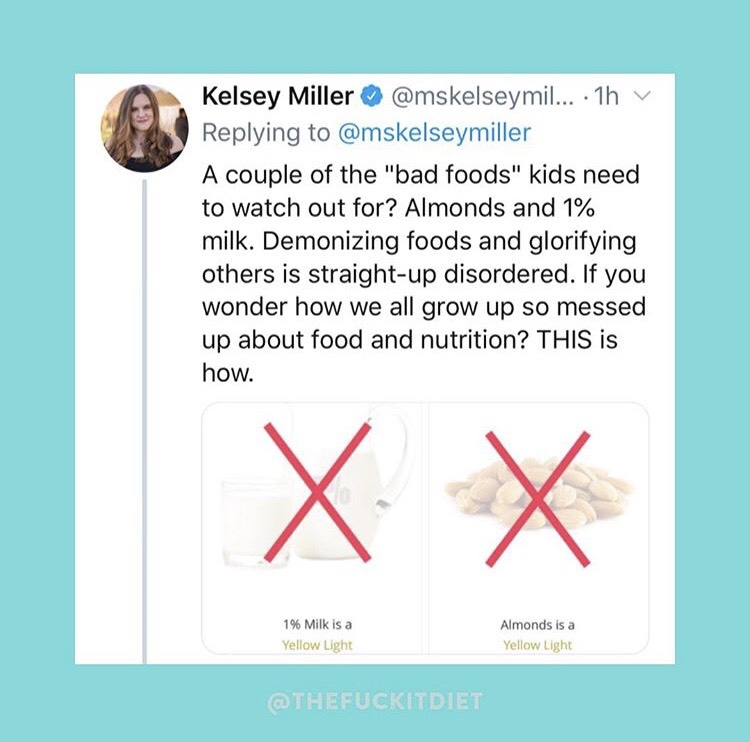 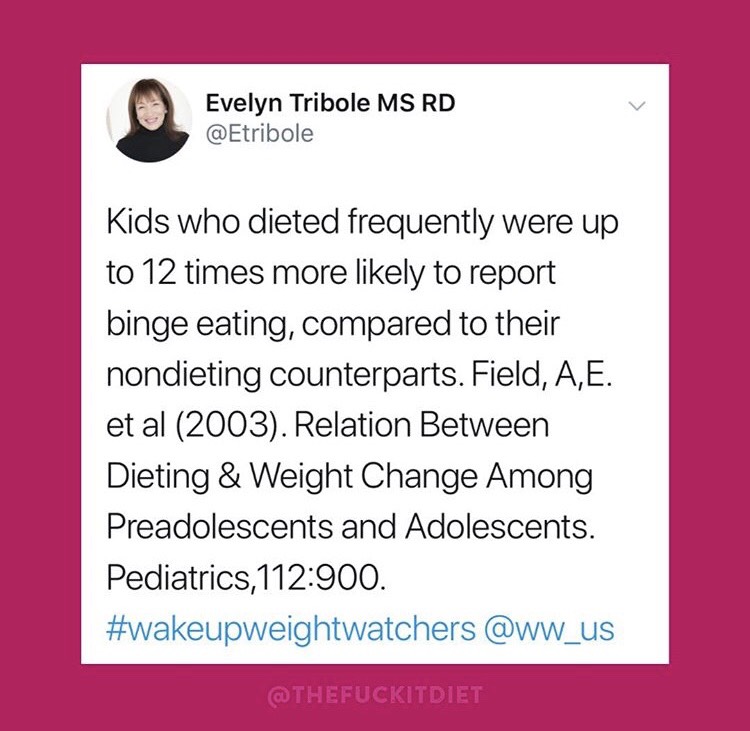 When Michelle Obama launched her Let’s Move! campaign in 2010 designed to combat childhood obesity, it was about just that: moving. Let’s Move! focused on stepping away from your phone/Gameboy/television/laptop — getting the hell up. And, underlying, sparking an interest in physical activity and nutrition.

It sure as hell didn’t market photos of eight-year-old girl’s “Before and After” photos. An April 24, 2018 ScienceDaily.com article revealed that an estimated 1 in 20 children and teens—that’s 2.6 million American kids—suffer from anxiety and depression. There are too many reasons to list here, but truly… do you think before and after photos of an eight-year-old “struggling” with weight loss are going to help those numbers?

It’s no news that there have been countless studies performed on the addictive properties of apps, especially for kids who are exposed so early in their essential stages of development. Developers depend on it. The more addicted you are, the more money they make.

Seeing as how Weight Watchers isn’t run by a bunch of dummies looking to report a downturn in profits, one can only deduce they are hoping to hook impressionable kids on diet culture.

Childhood obesity is indeed an issue. A 2015-2016 study revealed that 1 in 5 children aged 6 – 19 is medically obese. It doesn’t take an expert to understand that dieting is not the same as healthy nutritional eating. Dieting is an industry. Dieting is a culture.

Stop and think back to high school for a second. How many girls did you know who had eating disorders? How many threw up after lunch? How many partook in normalized starvation, as in chewing a stick of gum for lunch or counting the calories in celery sticks. This is “diet culture”.

Now, flash forward. You’re out with a bunch of woman friends. It’s time for dessert. Start listening to the amount of “I really shouldn’t have”s, or “I’m trying to lose weight”s, or “I’ve sworn off dessert!”s. Why? Because that’s the culture. We feel the need to apologize for eating.

When I was a teen model in the late ‘80s, I went to a go-see for a weight loss ad. I can’t remember the company, though it wasn’t one of the big dogs. I was never privy to their marketing plan, their inner-workings, their full intentions. What I remember were two men standing in front of me, analyzing me carefully, looking at a photo, which they’d actually shown me beforehand. It was the “Before” photo of a heavier woman, noticeably older. I was 5’11”, around 15 or 16 years old, and I weighed about 120 pounds. It was a weight loss ad, in which we were to be presented as the same human. We were not. Ultimately, I didn’t get cast because we didn’t look enough alike. I went home and shrugged it off, as you do in that business, never questioning the morals of such things, because modeling, much like the weight loss industry, wasn’t really known for its morals. 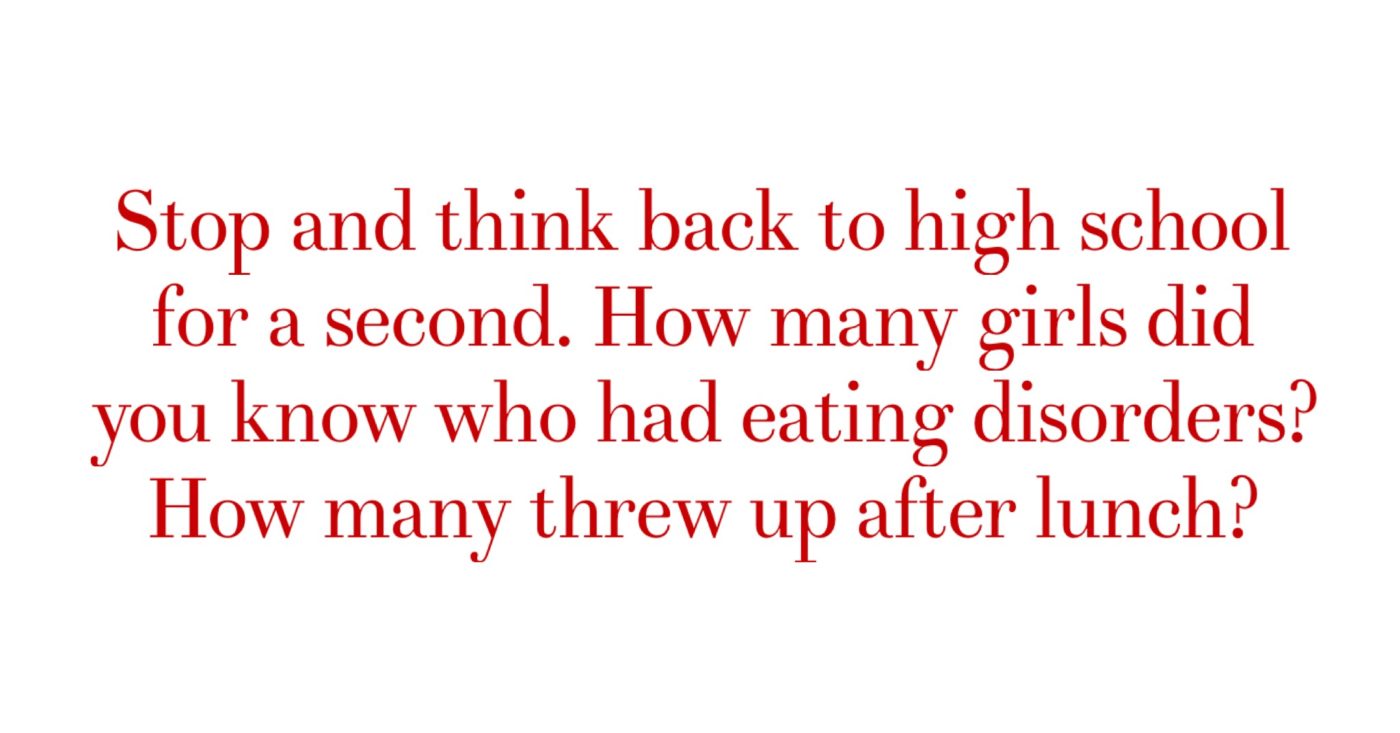 Here’s the best weight loss advice you’ll ever receive: Don’t listen to anyone tell you about your own body. If your doctor prescribes something, listen to her. Otherwise, no one—no matter what they tell you—knows your body better than you do. Not every woman with a fit body in a bikini is “flaunting” it if she gets her picture taken. Likewise, if another woman is wearing a bikini and seems like she needs some “body positivity”—save it. She might be totally healthy and happy without you. Mind your own business unless it’s asked for. If we’re going to be honest, it goes against our conditioning. Women compare and criticize, even when they don’t want to. Just remember, the industry needs you to be conditioned or else their stock plummets. It’s a racket. Don’t buy into it.

Just for “fun”, start looking at headlines and magazine covers, and count the number of weight loss articles and ads you see in a day. That $70 billion a year ain’t gonna make itself, Ladies.

I should also mention, in full disclosure, I did a Weight Watchers-esque program out of college to lose a few pounds, and it worked wonders. Weight loss programs aren’t the problem. Weight Watchers, when geared towards women of age who genuinely want to lose weight, isn’t the problem. If they help you to achieve your goals in a healthy, non-addictive way—hoorah! It’s no one’s business but yours.

And, to thank you for stopping by, here are my no-fail 100% guaranteed year-round beach body tips you can start implementing right now:

3  Have a freaking awesome time—and don’t let the media tell you there’s anything at all wrong with you.

4  When it’s not beach season, put more clothes on so you don’t freeze to death.

5  Get naked when appropriate. (Like weight loss itself, appropriate nudity is subjective.)

First job, new city, one suitcase — 7 key pieces to squish in (and none of them are jeans!) 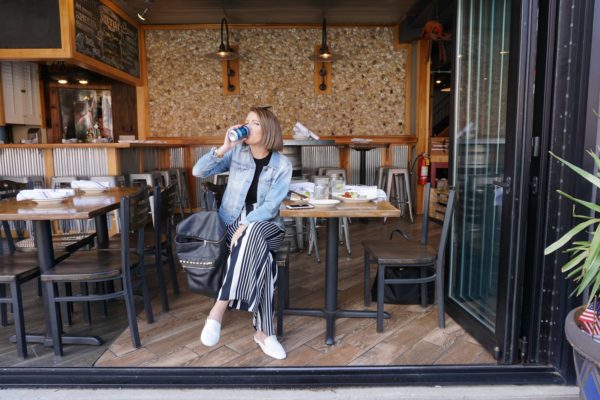 Michele, 27, a copywriter, classifies her style as “casual, yet elevated” adding a jean jacket to wide-leg striped pants