“I consider myself a Global Space Statesman,” he said, perhaps by way of defense. Certainly no-one in public life travels more — his weekly schedule looks like most people’s lifetime resume.

Buzz Aldrin is one of the most famous people on the planet, and an American treasure. Born Edwin Aldrin Jr., he got his more familiar moniker when his two sisters couldn’t pronounce “brother”, and instead said “buzzer”, which was shortened to Buzz.  He’s been a decorated Fighter Pilot (66 combat missions), test pilot, and of course Astronaut and the most photographed man to walk on the Moon (Neil had the camera), when he and Neil Armstrong made probably the most historic voyage in human history, on Apollo 11, in late July of 1969.

He’s been an actor on a number of shows including 30 Rock and Big Bang Theory, an animation voice-over artist, a reality TV dancing star, author of 10 books (his most recent being ‘No Dream Is Too High’), a global speaker, fashion runway model… and the leading, most articulate exponent of our traveling to and colonizing Mars.

In January 1963, Aldrin earned a Sc.D degree (a rarer and higher degree than a PhD, if you were wondering) in astronautics from MIT. His doctoral thesis was Line-of-Sight Guidance Techniques for Manned Orbital Rendezvous. The dedication read, “In the hopes that this work may in some way contribute to their exploration of space, this is dedicated to the crew members of this country’s present and future manned space programs. If only I could join them in their exciting endeavors!”

Checked that box, didn’t he? 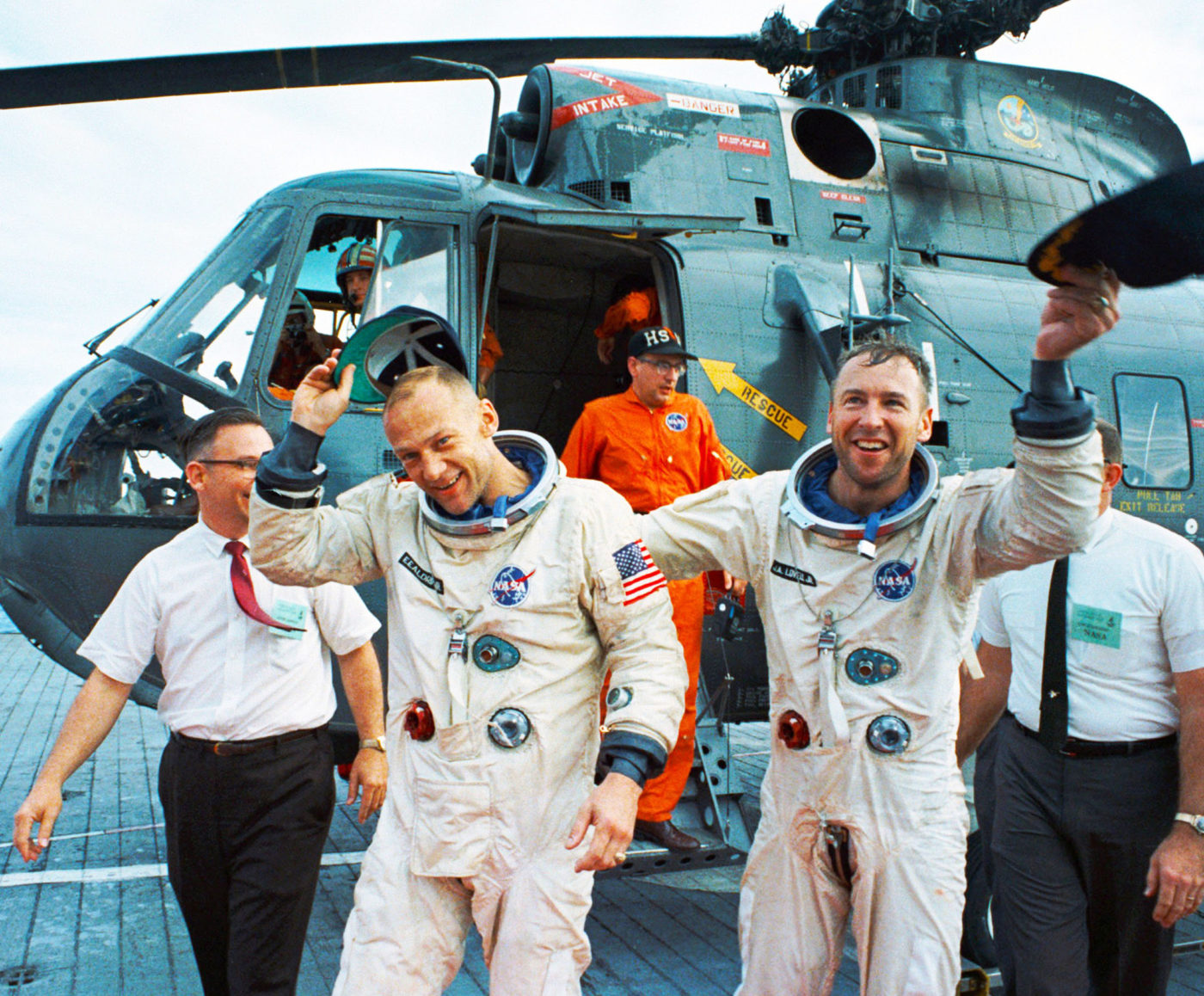 Trial Run: Three years before landing on the moon, in November 1966 Buzz (left) went into space on Gemini XII. Here he is delighted to be back safely!***NASA***

Perhaps an odd question for an astronaut, but what do you do for jet lag?

[Laughs] I don’t get jet lag because I set my watch to the next time zone before I arrive there! I try and sleep on the plane. Maybe a long time ago I used to maybe make a trip and sort of keep on the previous time, but when your life is kinda mixed up everyday it gets used to being mixed up and I just try and start thinking where I’m going to be. I get on the airplane, I set my watch to the time I’m going to be on, then from that point on I’ll be on that time zone.

You’ve been all over the world, which is your favorite country?

The U.S. of A. (Watch Buzz Cuts video below to hear why…)

Anything other than Spago’s…? I go there a lot! I guess now it’s the people you may see. So, you know, I haven’t an attachment to a place, but I think I do to the people I may run into… For instance, because of my friend Spike from Boston, I like Cafe Milano in DC. You get to know the people. They know you, they take care of you when you go in.   www.cafemilano.com

Has anyone ever had sex in space?

Is that one of your questions? I do not know….

[Buzz later added that he thought they’d sent a married couple up in space… in fact they have. However the two astronauts Mark Lee and Jan Davis who’d secretly married prior to their brief mission in 1992, claim that they did not have sex in space! And apparently it’s quite hard to do, something to do with organ and fluid dynamics plus the gravitational push and pull that doesn’t exist….we’ll leave it there. But, you didn’t know that yesterday, did you?]

You’ve passionately advocated, for over two decades that it’s vital mankind goes to Mars. Why? 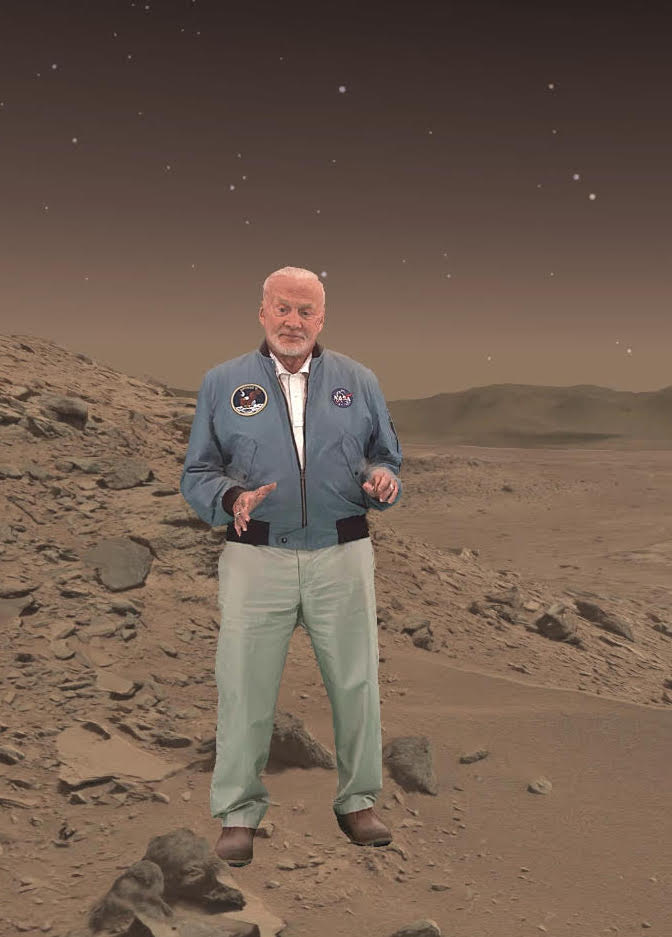 On to Mars! Buzz has become an impassioned disciple for manned travel to the red planet***NASA***

Yes, my purpose is to not just visit but to keep it occupied. We land and we stay, we land and we settle. A permanent settlement.

We need to be setting up graduate schools now to train these people. A diverse group, elected into NASA. They will be the apostles of space with their talent and their sacrifices, severing ties on Earth. We need very dedicated people who see the opportunity. Pioneers for their country. Pioneers for the human race.

When they get to Mars, we don’t want them much older than 40 but we want them to be mature enough (30+) to make a wise decision based on what they’ve seen so far in their life, to become pilgrims, pioneers.

Whatever we’re doing isn’t working too well. It’s been five decades since the Eagle landed on the Moon. We need a leader who wants a legacy. This is not a foolish legacy, it’s very uplifting for humanity. There should be a coalition of capable nations but no one here is thinking of such advanced things. We need Spacecraft moving in cycling orbits: Earth, Moon, Mars — what I call ‘Cycling Pathways’ — to occupy Mars. We need an International base on the Moon to mine the ice.

[Ice crystals would be turned into rocket fuel to refuel the landers — you knew that. It’s the bit about sex you didn’t know….]

Where is your favorite hotel in the world?

It might just have been a recent one in Mongolia. I think it was called Shangri-La…

Also, the hotel we were at in Beijing just before, there was a space exploration meeting and Congress stupidly had forbidden NASA to talk to the Chinese. Can you believe that? I was the US representative and there were heads of all the other space agencies, except the US. It was really embarrassing for the head of the European Space Agency to have to take over the role that we were supposed to be doing.

What was the best advice given to you and by whom?

“Four score and seven years ago our fathers brought forth on this continent, a new nation, conceived in Liberty, and dedicated to the proposition that all men are created equal…”

You travel so much, do you ever wake up and wonder where the heck you are??

[Laughs again] Sometimes yes … Which hotel is this?  What’s my room number? 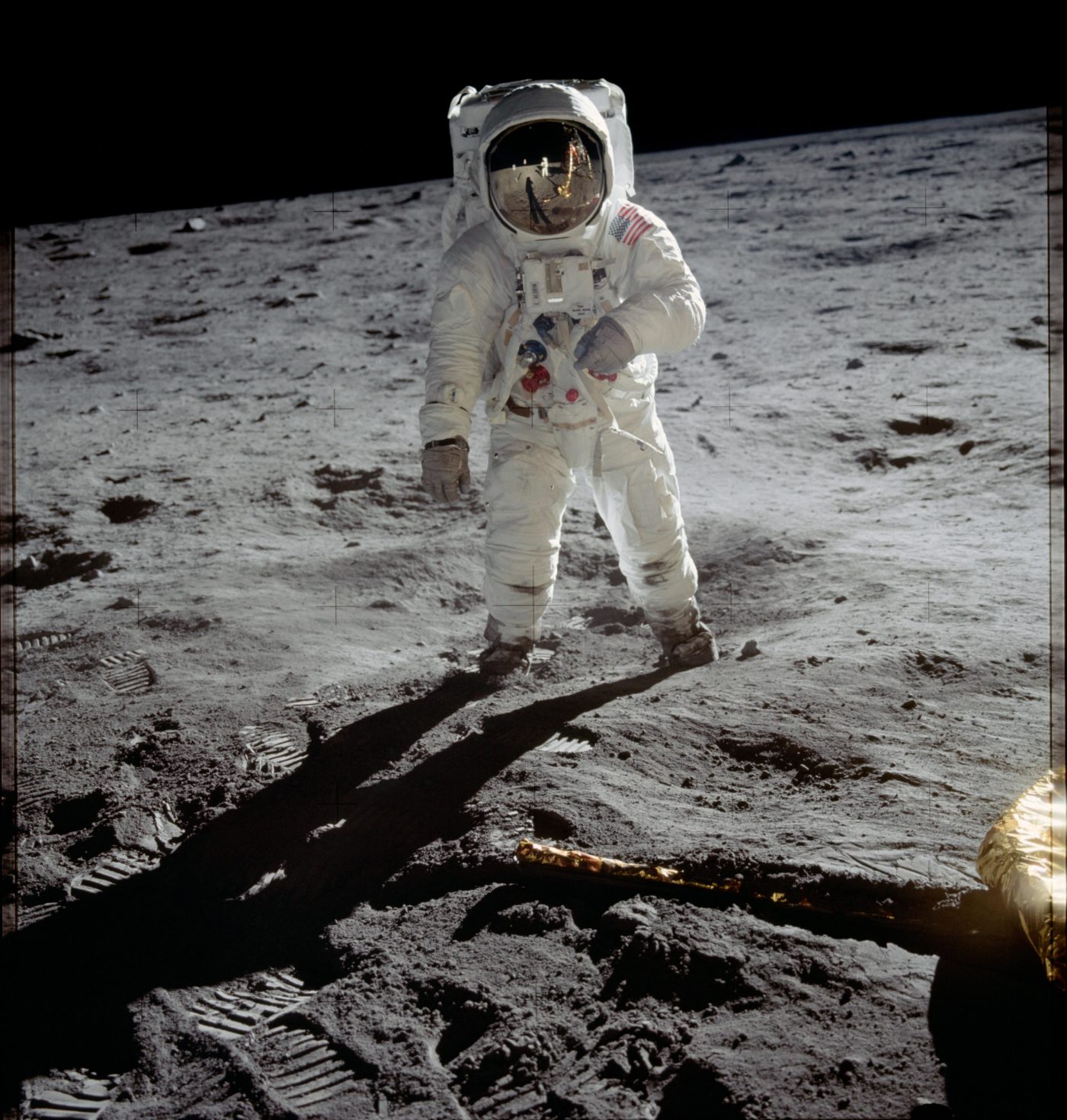 Walking on the Moon: Buzz, photographed by Neil Armstrong, the only other guy around***NASA***

The most beautiful place you’ve ever visited? And where do you like to go diving?

I love Monte Carlo. They know me there. I’m friends with Prince Albert. I can’t think of the name of it but there was a restaurant in Monte Carlo, kinda greens and trees as you walk in, and it was just very opulent, very cozy. I can’t remember the name of it! Some people have a great memory for specific names and places…

Diving, the Maldives Islands – they’re abundant with fish. Aqaba, North of the Red Sea. And the island of Palau.

Who was your favorite character in Thunderbirds?

Hmm I don’t remember Thunderbirds, but I liked Flash Gordon as a child…. and I was on The Simpsons.  [‘Deep Space Homer’, February ‘94.]