Ghost Hunter Alain Camiling grew up in a deeply religious family in Southern California. In 1988, he and a few friends were hiking the famed Southern California Hollywood sign and saw a full apparition of a woman believed to have been Peg Entwistle, a troubled actress who threw herself off the sign, thus ending her life in the 1930s. Even in the world of paranormal investigators, their story is pretty well-known, recreated in perfect horrific spookiness for the SyFy Channel’s Paranormal Witness.

Since this amazing experience, Alain has sought to document and learn about the paranormal through collecting audio, video and various other forms of data, founding what is now known as P.A.R.T. (Paranormal Activity Research Team, theparteam.org). He does what he does to help people – and he’s totally for real. If you’d like to go on a ghost hunt with him, and you happen to be in Southern California, he just might let you.

Unfortunately, I do not have any experiences of ghosts traveling from one location to another, other than from one room to another at the same location.

I have heard of people seeing the same entity or ghost at the same time at different locations though. The only ‘traveling’ I can relate this to are attachments; spirits or entities that kind of hitch a ride from the living and stick around wherever they are for a while.

How is going on a ghost hunting expedition different from any other sightseeing trip?

To be honest, most paranormal investigations can be pretty boring at the time. However, unlike a sightseeing trip, you never really know what you’re going to get. Sights and buildings don’t change. With ghost hunting, there is always the potential of something new happening. Those times can be exhilarating. I’ve compared our investigations to fishing. You might have to wait around a while and use all kinds of different lures or bait. But, when you get a bite and can reel that fish in, it’s a rush. That being said, the combination of going to historical sights for purposes of ghost hunting is the ultimate great time for me.

How does your equipment differ? Obviously a lot I’m guessing.

Interestingly, adventure travel and ghost hunting are pretty similar. The must have is a camera. Nearly everyone has one on their phone, so people are always ready there. But, for paranormal investigating purposes, a separate dedicated camera is great. Being able to adjust for the low-light, or even no-light, situations with a good quality camera really helps. Flashlights and warm clothing aren’t just for camping either — nighttime investigations make up about 95% of our trips.

Would you ever open a travel agency for people who wanted a paranormal experience? 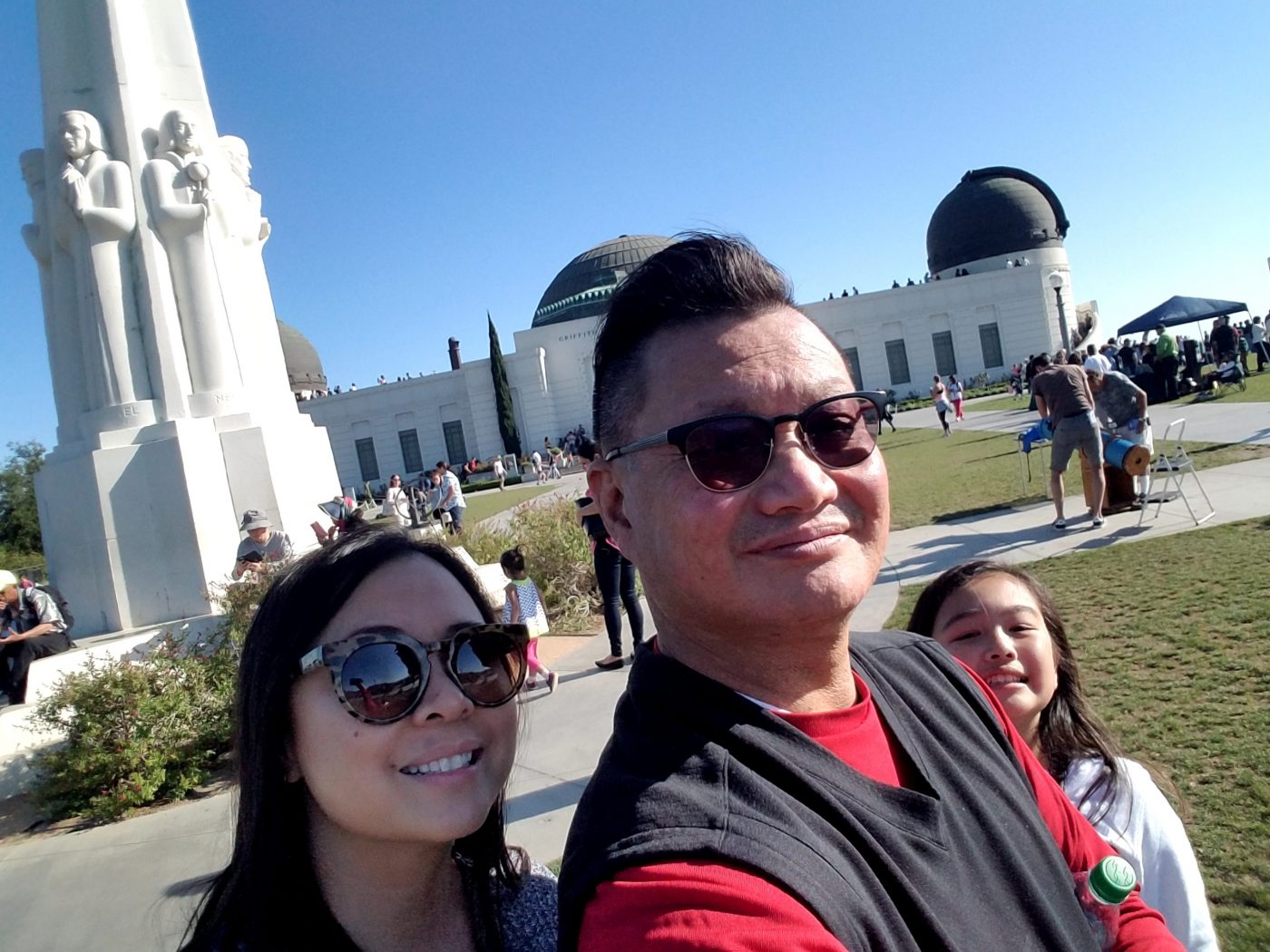 I ain’t afraid of no ghosts! Alain with wife, Christina and daughter, Casey

Yes and no. Most public locations that have embraced their strange activities like the Whaley House in San Diego or the Queen Mary in Long Beach, both in California, have their own in-house tours that charge people for their participation. I’m not very keen on that. It is one of our team’s goals to share and bring these experiences to more people though. Although our team always welcomes new people to come along, we cannot predict activity or lack-of, at any location. So what we provide is the experience of the research processes, and the hope of catching some great data or evidence at some cool locations.

What would be your personal Top 5 Must See places for someone looking for a paranormal adventure?

5  Church buildings — Seek a local church that has a recorded history for you to research. Talk to the clergy… they’re always hesitant to talk about it, but have really interesting opinions about the events.

4  Libraries — The peace and serenity of an established library, a lot of times, holds true irony to what you can see and hear after hours.

3 Hotels that have a reputation… find out for yourself.

2  Camp Out! For me, it’s Catalina Island. If you’re on the West Coast (Southern California specifically) — for some reason, our team has always had strange, inexplicable things happen here that did not involve wild life. Plus, you can’t beat the location for its breathtaking sights and activities during the day!

1  Hospitals – Talk to any night shift staffer and they’ll have a story or five to tell you. Ask for permission and help them validate their experiences sometime.

You’ll notice I didn’t list cemeteries. Two big reasons; most of the time they’re closed to the public in the evening and the folks that come out to hang around them in the evening usually aren’t up to any good. It’s dangerous and more often than not, fruitless.

What is the first thing you pack when you’re gearing up and heading out?

Do paranormal investigators have your equivalent to sunscreen? Holy water?

I carry Holy Oil. Having said that, Holy Water and/or Holy Oil only work if the person that uses it has an actual belief and faith.

What would be your advice for someone hoping to hang out at the Hollywood sign?

First thing is, it’s trespassing. It’s fenced off with alarms, sensors and a guard at the sign itself. Secondly, it’s dangerous. The hike up to it is precarious and even worse at night when you can’t see where you stepping. The trails above it are close enough to get the experience and maybe even see the ghost of Peg walking around! When my friends and I hiked up to the sign as college students and witnessed first hand the spirit of Peg Entwistle, our screaming tumble down the mountain actually tore my left MCL!

Is it wise to bring home souvenirs from a ghost hunting trip? What could go wrong???

1) It’s disrespectful. 2) You risk upsetting any possible ghost that still “resides” at the location. It could make it worse for the people that graciously let you investigate there to begin with. 3) You’re risking attachment or being followed home by spirits.

Seriously, are there any haunted beaches out there?

The one beach I can speak to is the coastline immediately next to the Hotel Del Coronado in San Diego California. A mystery female figure has not only been seen in the hotel, but walking the beach itself. Beaches are beautiful! Who wouldn’t want to hang out there forever?