I have just read the most interesting cookbook I’ve ever read, although, having read it, and although it has recipes and sumptuous photographs of food, ingredients, and the restaurant where these ingredients are magically prepared, and is written by the restaurant’s tortured genius chef, I’m not sure it is a cookbook. I’m not sure anyone told me it was, now I think about it, including the publisher, Australian house Hardie Grant Books, who refer to it obliquely as “this breathtaking book”. I’m not sure of anything. 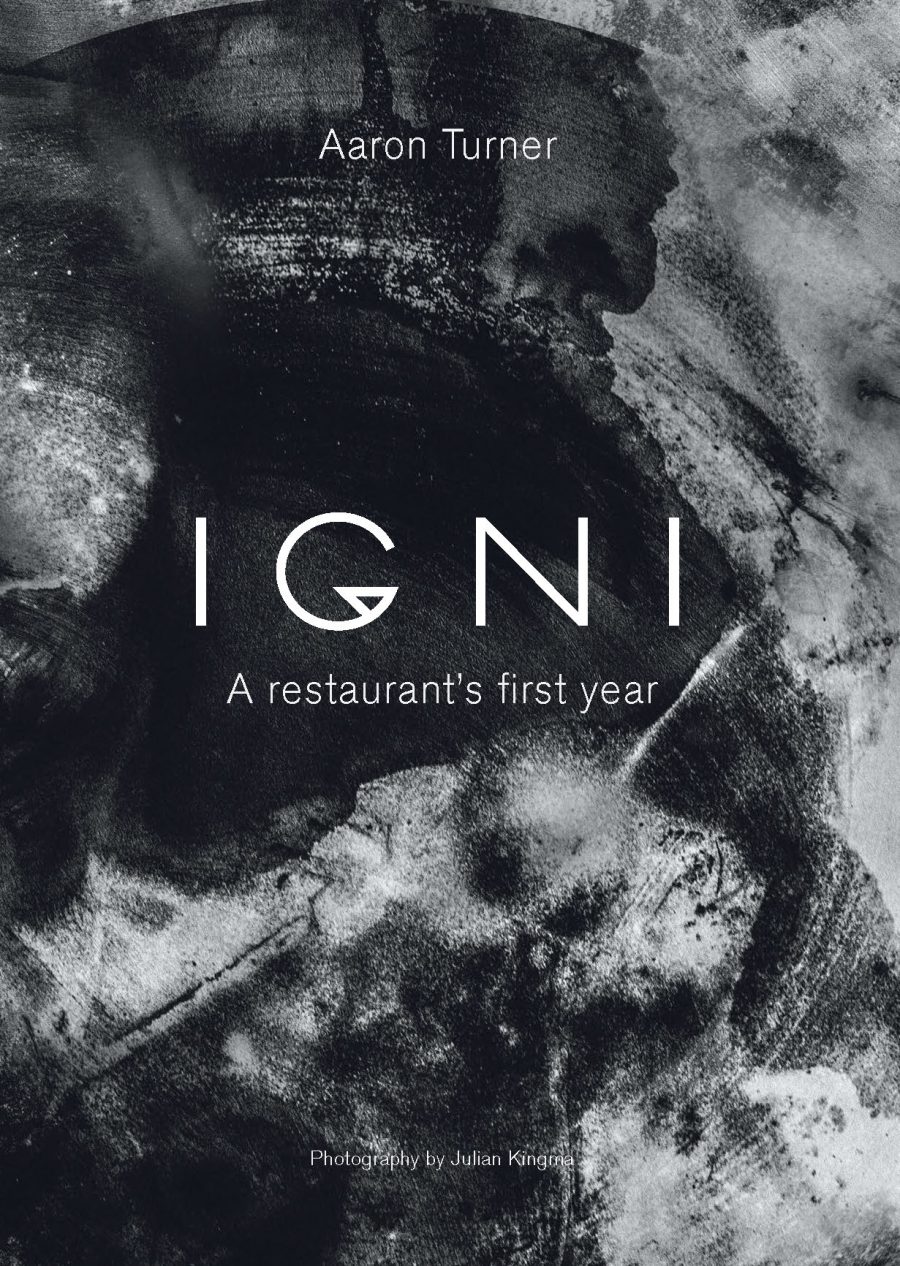 Whatever it is, and I suspect it is more a memoir and art book and unfiltered therapy session than a cookbook, it’s called IGNI, the name of the restaurant said tortured genius Aaron Turner opened and has chronicled the first year of, from opening day January 20, 2016 to January 2017. Like all great books it has an origin that precedes the beginning, and the last struck note of its last page rings on, fading into a glorious sonic distance past our ability to hear it.

Aaron, who I affectionately call by his first name, such is my assumed familiarity having read his book, opened his first restaurant, Loam, in Victoria, Australia, in 2008, after working back to back in two restaurants voted Number One in the world, Spain’s El Celler de Can Roca, and Denmark’s Noma. When I interviewed him a couple of weeks ago, he awkwardly said that he didn’t like to talk much about that because it made him look like he was trading on their reputations. Loam, which not only didn’t have menus, it didn’t have recipes, with the chefs cooking extemporaneously the ingredients they found or got that day, quickly grabbed laudatory attention, and awards in 2012, and then, at the end of that year, on the Apocalyptic date of 12/12/2012, he closed it, having discovered his wife Astrid had been having an affair with his co-chef.

Devastated — I’m not extrapolating here, he makes that point strenuously in the first pages of IGNI — he left for America and, accepting the offer of a couch from a friend, winds up in Nashville, which illustrates the randomness of God’s plan for any of us. He drinks a lot, he eats a lot, mostly, ultimately, Nashville Hot Chicken, as powerful a revelation and conversion as Saul has on the road to Damascus,  leading him to climb out of his ennui and darkness, and decide eventually to go back to Australia and try to recover the career he himself derailed.

The result is IGNI, named from “ignite”, the lighting of the fire he cooks by, which is mostly the wood he gathers, forms into a quasi pagan pyre, and lights. (On the last page he uses the line “we light the fire and see where it takes us” — as cogent a psalm for his eclectic cuisine as any chef has ever expressed.)

Once again Australia has embraced and lionized its favorite prodigal son, and the “box” as he calls it, at the end of an unassuming lane, looking over the water in Geelong near Melbourne, is once again a native foodie’s prime destination. 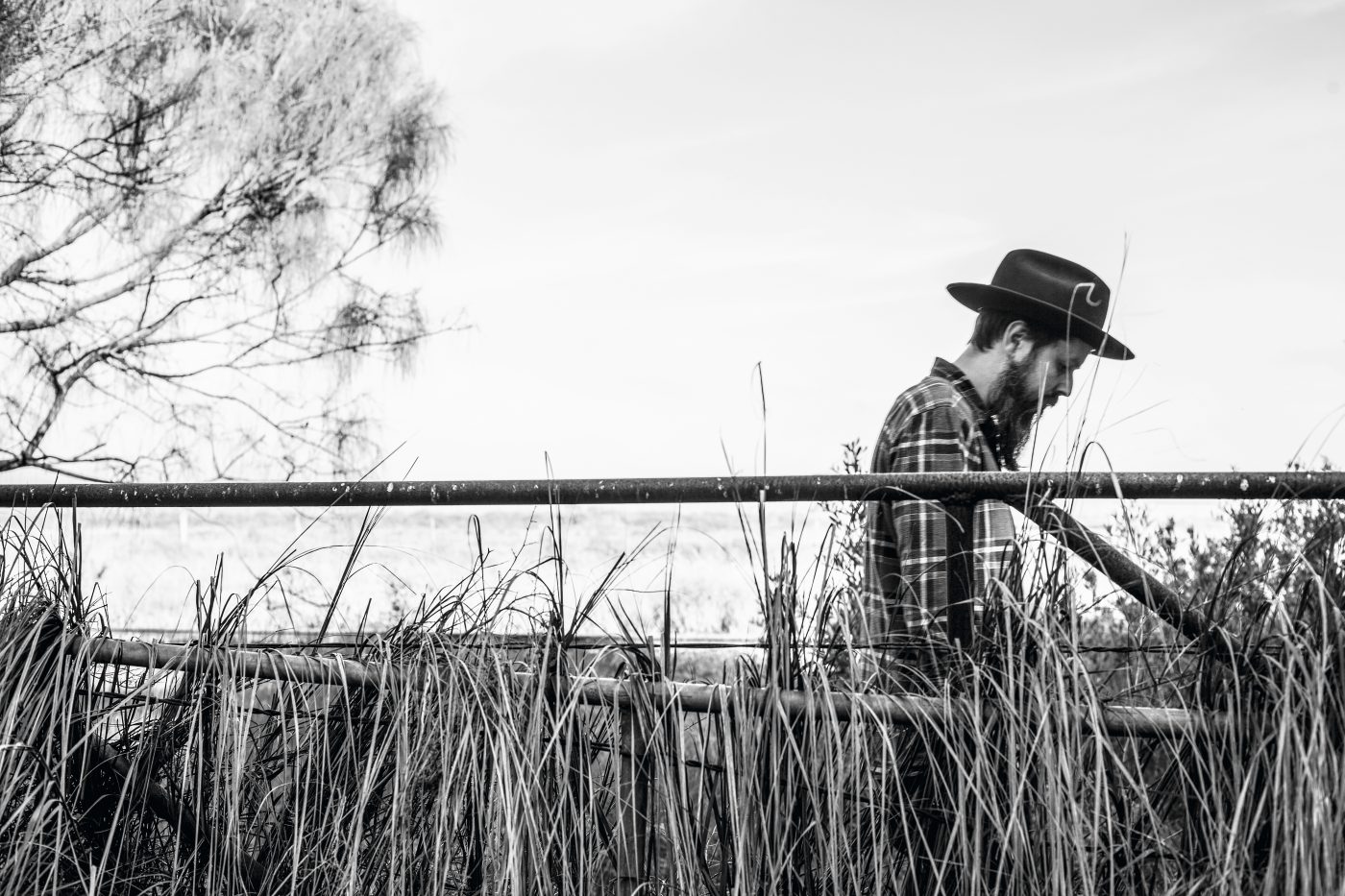 We met in NY at the Whitby Hotel and had this conversation.

What did you learn from working at Can Roca and Noma?

I learned how I wanted to run a restaurant, and that was the way Can Roca does it. They’re very nurturing, kind, want to help you learn. Noma was the opposite, very push, push, yelling, more the British model.

You’ve done more than a cookbook here. Why be so frank?

Quite frankly, I kind of got tired of seeing all these perfect stories. I think cookbooks are sold on this idea of a perfect food journey. For me it wasn’t that, so I thought it was time to throw it all out there and see what happens. I love the industry but, the time I started this, I didn’t, I hated it. I’d gone through a marriage breakup, the old cheating wife with one of the chefs, left me with everything, the debts, the works, I had to trade myself out of the lease, and it just broke me. That’s why I wound up in Nashville. Just sold the house and took off.

But I still love food, and came back into cooking because I don’t know how to do anything else. And I hadn’t finished doing it, because I really fucking love it. So I opened a restaurant again, not really wanting to open a restaurant. The book’s about going through that process. 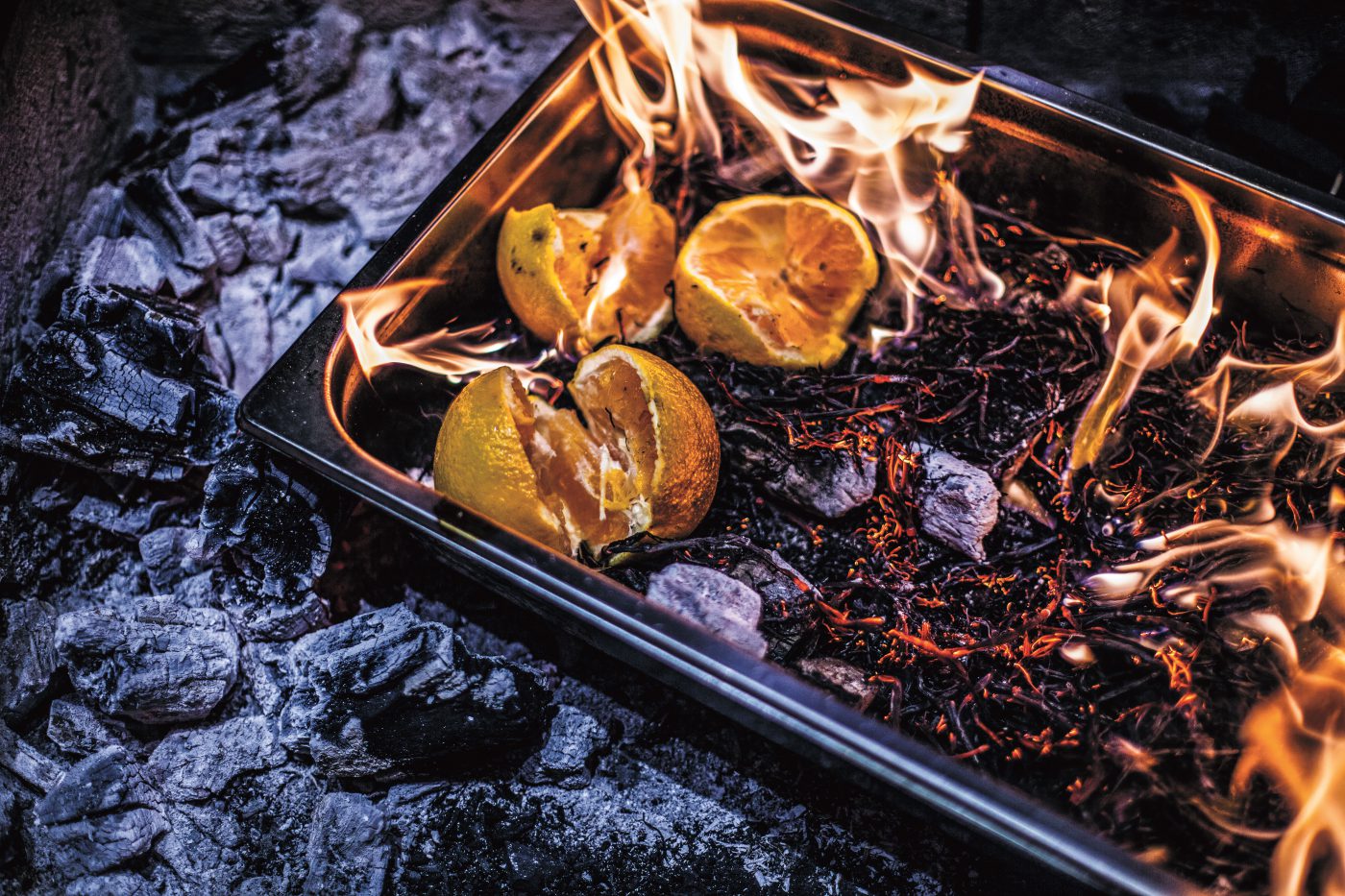 How did your travails inspire you as a chef?

I built a kitchen when I started IGNI, and I put in equipment I had no idea to use — sort of self-sabotage, so if it all goes to hell, at least I can blame that, you know? At the time it was the old chef’s story, I was drinking too much, full of self loathing. So I had a kitchen where the only thing I knew how to use was the fire, so I cooked on that.

I was pushing for no name, because I would have been happy if no one came. But I couldn’t swing it, my partners outvoted me. My partner Jo came up with the name.

Who are three of your favorite chefs around the world?

I know I’m supposed to say the famous names but it’s really hard to pigeonhole, because I just admire anyone who’s willing to put their money and balls on the line. Borrow from mum and dad, like I did. It’s like, who’s your favorite three musicians?

Ian McKay, Jello Biafra and I really admire Tim Armstrong, from Rancid, who wrote a song every day for a year, about Americana.

What are your three favorite restaurants in the world?

The last three years, I mostly stopped eating in restaurants. But I had a great meal last night at Contra, two young New York guys doing their thing. In Melbourne I always wind up at Embla, and I love Brae, which is about 35 minutes out of Melbourne. Those are my three at the moment. And any Chinatown. Anywhere!

In Nashville I discovered Nashville Hot Chicken, it’s fried chicken but done in a Nashville way. There’s a whole story about it, about a cheating husband that comes home, there’s lipstick all over him — no one knows if this is true or not — and his wife at the time thought she’d stitch him up, and she cooks some fried chicken, but just covers it in cayenne pepper, just incredibly hot. When I discovered it, it really took me, and I booked a trip back home to Melbourne, and with a buddy of mine opened a Nashville Hot Chicken restaurant, which went crazy. And then I moved back to Nashville. 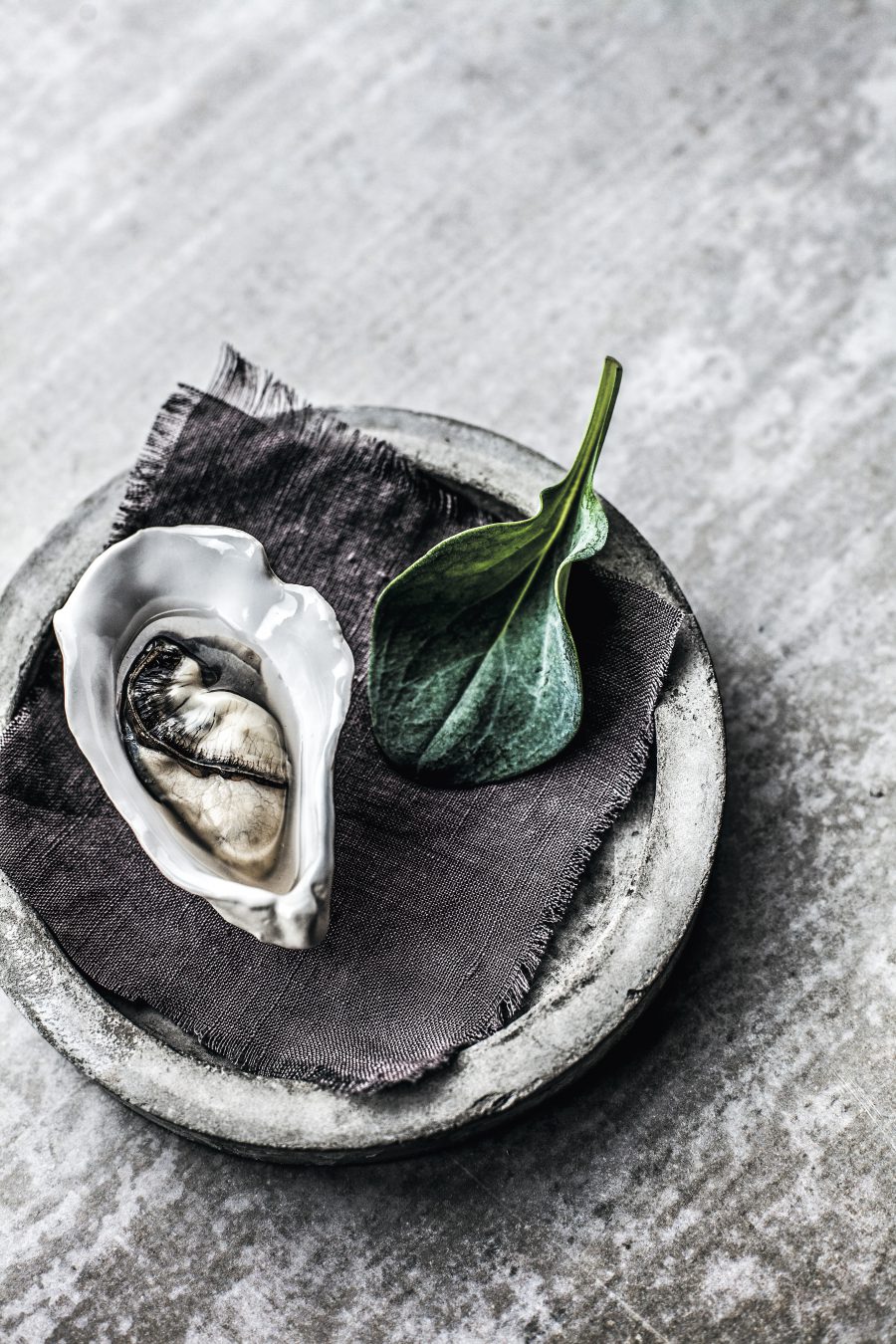 Oysters in a seawater emulsion

What is the Australian National Dish? And don’t say Elle McPherson!

Nicole Kidman? Hmmmn… it’s really got to just be fish ‘n chips, or a meat pie.

There’s a lot of focus at the moment on native proteins, and fruits, which haven’t been that accessible before, and a lot of them aren’t that good. But there is some good stuff in there, including Wallaby and Kangaroo, and Wallaby, they’re much smaller, is much tastier than a Kangaroo.

How do you describe Australian cuisine?

It’s always had this awkwardness about it, because it’s so young, and we’re so heavily influenced by the British. But it’s really starting to find its feet. We’re a nation of so many immigrants, I think that should be embraced, rather than trying to just find something indigenous.

What cooking trend do you hate?

It’s funny you say that, I’m not really fond of this hyper-focus on Australian ingredients. I’m not a fan of using an ingredient just because it’s native. There are some great ones, but what we do really badly in our industry, is we hyper-focus on one thing, and that’s it. For me, if I don’t start with something that’s full of flavor, and life, then when it gets to the plate, what’s the point?

If one were to throw another shrimp on the barbie, what’s the secret to good barbecued shrimp?

If you were on death row, what would your last meal be?