As locals know, the Valley of the Sun has three seasons:  Heaven, Hell and Hell-Lite.

The hottest day I ever played was when I teed off at 1:00 p.m. on the afternoon Phoenix reached a record 122 degrees. I probably wouldn’t do it again, but I say this to make the point that golf even on a 106 degree day isn’t only survivable, but can actually be enjoyable. In fact, I’ve played many rounds on afternoons when the temperature hit 115 degrees.

The early bird special at the Encanto Golf Course

And summer is a good time to play because prices go down. The $250 daily fees at some courses begin to drop into the $60 to $90 range, and as the hellish temperatures of the Sonoran Desert begin their ascent into triple digits beginning in mid to late May, the greens fees at these bucket list courses will begin to soften.

But if you want to skip summer hell and go straight to heaven, then mid-October through early May is when the Phoenix metropolitan area is an outdoor wonderland of blue skies and spectacular sunsets that attract visitors from around the world to events like the Fiesta Bowl, Waste Management Phoenix Open, All Arabian Horse Show, Barrett Jackson Auto Auction, and Cactus League spring training.

The season is one of emerald fairways and greens pungent with freshly cut ryegrass and mild daytime temperatures in the high 60s to low 80s. During these six months, The Valley of the Sun is a golfing Mecca, a true paradise. Paradise, however, has a price. 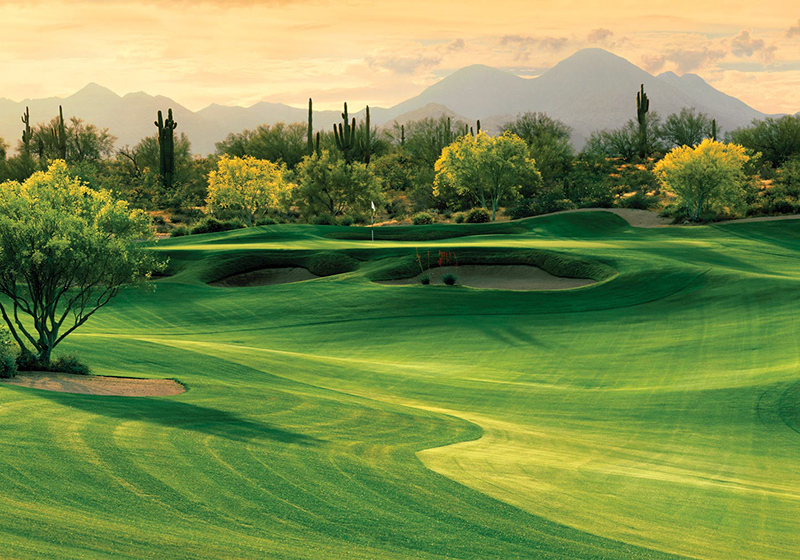 The lush, almost surreal fairways at the We-Ko-Pa course

During this “peak” season, the nicest courses like Troon North, The Tournament Players Club of Scottsdale, We Ko Pa, The Boulders, Grayhawk, and others command daily green fees of $200 to $450. For winter visitors, those may be bucket list destinations that justify bucket-list prices. Even locals might play one or two of these celebrity courses on a special occasion or to accompany out-of-town guests.  But a steady diet of $250 rounds adds up.

In the meantime, though, Valley golfers don’t sit on a couch in a basement – not that we have basements. There are something like 300 courses within a 45-minute drive of downtown Phoenix, and a number of them won’t break the bank. Phoenix has 5 municipal 18-hole courses, (Papago, Encanto, Aguila, Grand Canyon University GC, Cave Creek) all of which are good, and two of which are outstanding: Papago is owned by the City but operated and maintained by nearby Arizona State University as the home course for the National Champion Sun Devil golf teams.  The course offers views of downtown Phoenix and the nearby Tempe Buttes. Winter rates range from $100-$110, less for local residents.

Another really fine municipal course is Aguila about 20 minutes west of downtown.  It’s the newest of the City’s municipal courses.  Opened in 1999, this Gary Panks-designed track winds through desert washes and arroyos over 210 acres and offers views of the Phoenix skyline and surrounding mountains.   Winter rates range from $40-50.

There are hidden gems among the non-municipal, daily fee courses, too.  Many can be played for $100 or less per round.  Most often those courses are a little farther away from the resort areas of North Scottsdale and Carefree.

Along the South Mountain Range near downtown Phoenix, for example, there are some really scenic and beautifully maintained courses including two of my favorites:  The Legacy at South Mountain and The Raven, both of which can be played for under $100 even in the peak season. 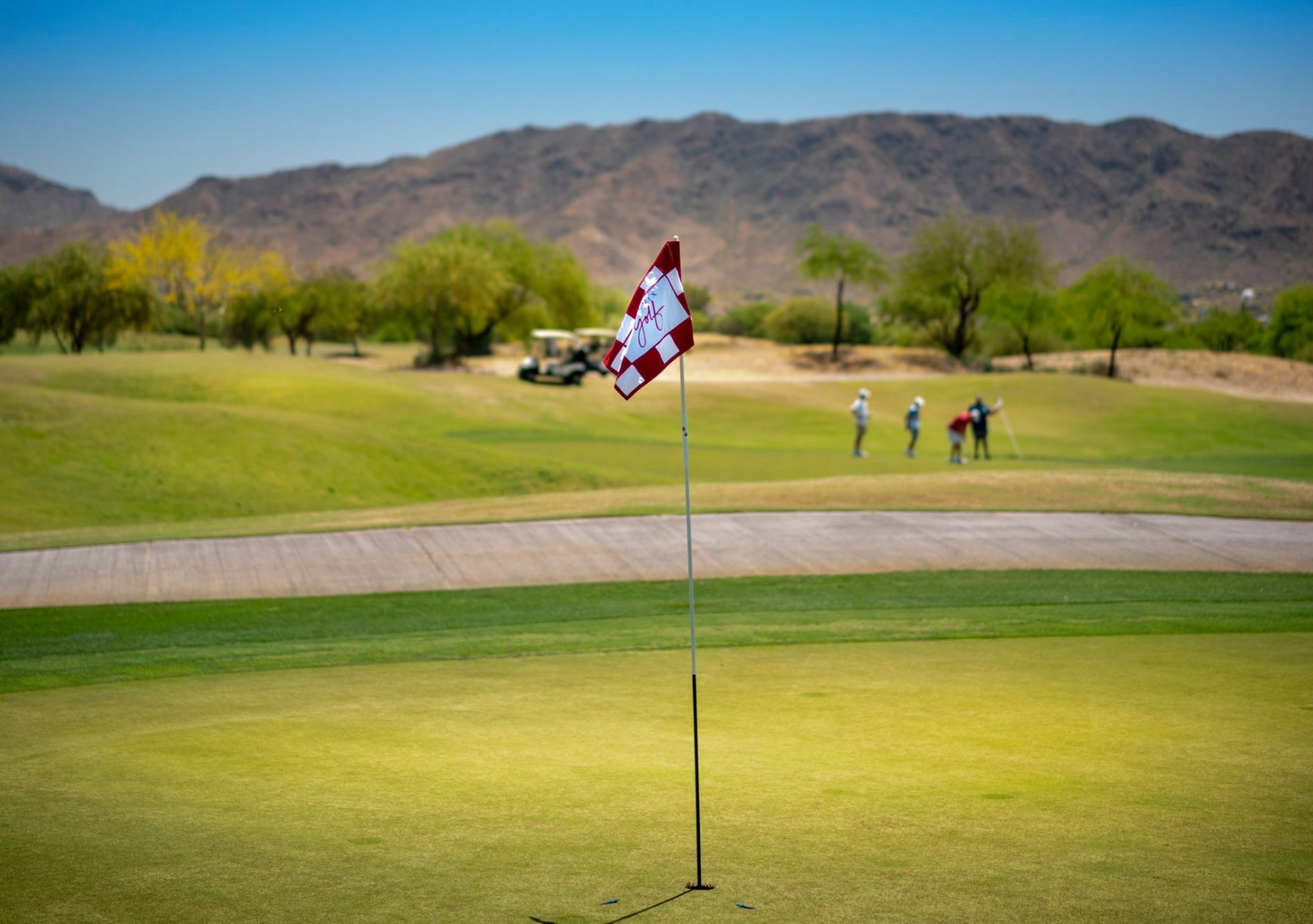 In golf, there’s always the next hole… A green at the Aguila Golf Course

And 20 minutes west of downtown Phoenix is the 440 acre Wigwam Resort with its restaurants, full-service spa and three courses, the Gold, Blue and Red.  Though all three are fun, challenging and usually in immaculate condition, the Gold Course is one of the finest parkland-style courses in the State.  And any of them can usually be played for $100 or less in the peak season.

A little further to the west of downtown Phoenix, is the Town of Buckeye.  In its planned community known as Verrado, you’ll find another two of my favorite courses:  Founders and Victory.  Founders offers a true desert golf experience along the base of the White Tank Mountains.  At Victory, the player will find challenging golf with spectacular views of The Valley from a western perspective. Like most courses on the west side of the city, they too can be played for $100 or less in the peak season and for $40-60 during the summer.

If value and pleasant temperature is a priority, golfers can’t go wrong with “shoulder season.” Nighttime temperatures are in the lovely 70 degree range, and daytime temperatures may be in the low 100’s.  During these times top courses are in good condition and the daily fees are beginning their decline from the $250 range into the more reasonable double digits. For value, one could hardly beat a golf trip to the Phoenix Metropolitan area from late April to early June or from late September to early November.

Just be mindful that many courses perform some of their course maintenance, like aerating or over seeding, during these periods.  So check with the courses when booking during these times.

THE TARGET GOLF COURSES OF ARIZONA

The Phoenix area has almost 300 golf courses, and the most unique are the ones played around desert foliage 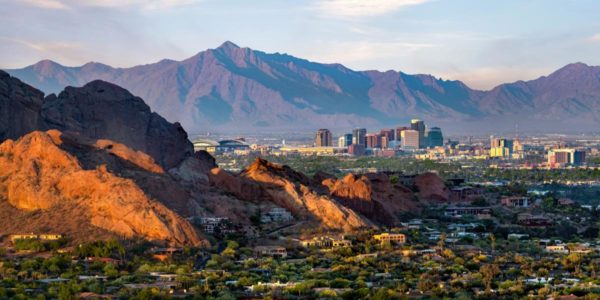