Phoenix was like the teenager who wanted to be Los Angeles when it grew up. And it finally happened. The LA vibe has insidiously crept in as big bucks tumble into the city: six-figure fancy cars, glass-walled architect-designed homes that riff on Frank Lloyd Wright, and the snaking multi-lane freeways and overpasses used to get around town.

But back to the weather. If I had a dollar for every time someone said, “But it’s a dry heat…” That dry heat can inch up to a slew of 118 degree summer days, and Phoenix is often rewarded the distinction of hottest place in the country. Undeterred, people are descending to the Valley of the Sun from all compass points. The new folks are contributing to make Phoenix one of the fastest growing cities in the country, with the metro area close to 5 million people. And, yes, that’s a lot of cars.

At first glance, Phoenix and environs is about as inhospitable as the Sonoran Desert it’s located in. That is, until, like the desert, you scratch beneath the surface. And here’s the key to the city: there’s enough room for everyone! In a megalopolis that keeps low-rise sprawling into the desert, not only individuals, but national and international companies are moving to town. A few recent examples: Taiwan Semiconductor Manufacturing Co. (the world’s largest) dropped 12 billion for new manufacturing plants; Sunlit Chemical recently committed 100 million for new facilities in the Phoenix area; and Howard Hughes Corp. invested 600 million to purchase 37,000 acres for its “city of the future.”

Maybe it’s the 360-degree bluest sky surround that stretches on forever and the cottony white clouds and baroquely pastel sunsets that lure people, including this writer, back. All that empty space gives a person room to breathe and dream.

A sampling of places to go and things to do. Happy trails, cowfolks! 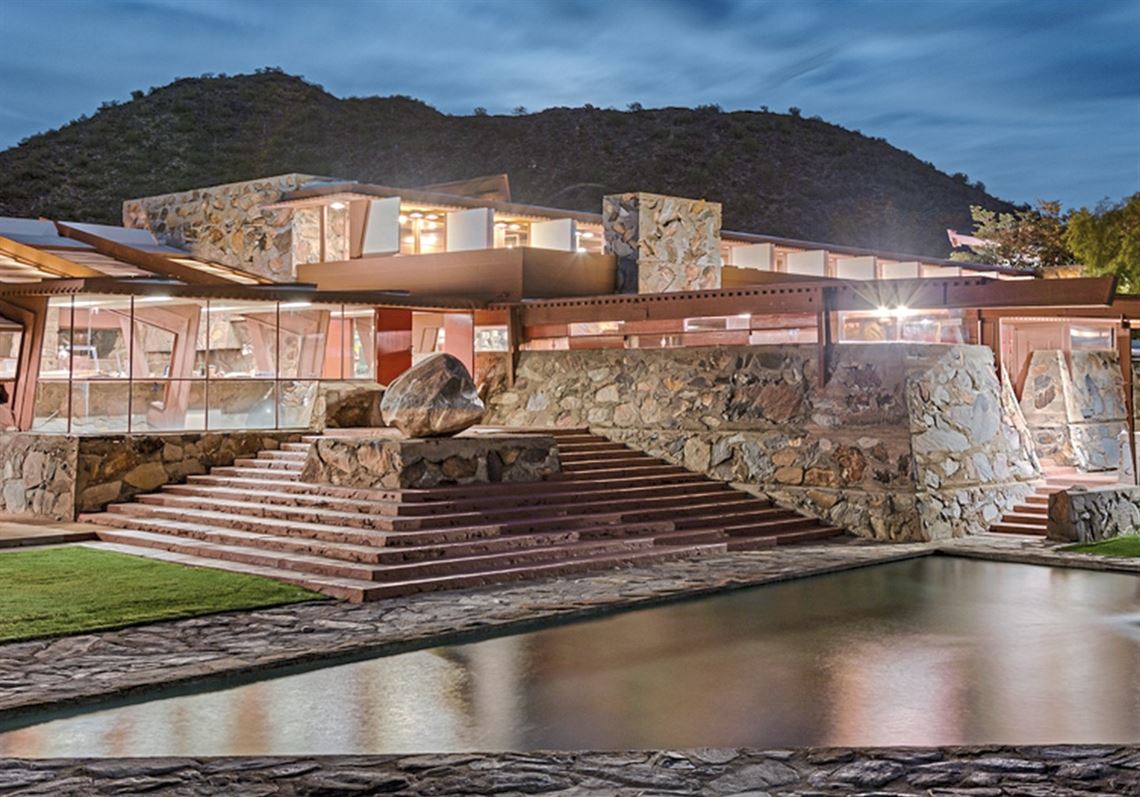 Perhaps the greatest architectural site in the country, Frank Lloyd Wright built his winter residence Taliesin West on a few hundred acres in northern Scottsdale. When he chose the once remote property in 1937, there was only land around him as far as the eye could see. A World Heritage Site, this complex of structures includes Lloyd Wright’s personal residence and studio. Guided tours give expert insight into Wright’s organic architecture design, as well as the habits and home of one of the world’s most renowned architects.

Among the approximately 300 golf courses in and around the Valley of The Sun, there’s a cornucopia of choice. But if there’s time and budget to play just one, perhaps that one should be the Tournament Players’ Club of Scottsdale. The memories of that round would echo the annual February national broadcast when a half million spectators basked under the blue skies and 70 degree temperatures to watch The WM Phoenix Open played on this course.

An architectural jewel box, this downtown Phoenix theater first opened its doors in 1929. Meticulously restored to splendid Baroque Revival glory, it’s the place to check out the Phoenix Opera, Arizona Ballet Company, touring Broadway shows and more. If you happen to be in town around Christmas, don’t miss The Nutcracker ballet. Phoenix is making its mark in the ballet world, thanks in part to world class training like Master Ballet Academy, founded by former Polish ballet soloists Irena and Slawomir Wozniak.

The Phoenix area is a hiker’s paradise. There are numerous places to see Native American petroglyphs that date back as far as 7,000 years ago. Notable is the two-and-a-half mile Holbert Trail petroglyph path that leads to Dobbins Lookout and a stunning view over the city. Experienced hikers know to bring a plentiful water supply and electrolyte tablets because heat stroke can strike quickly.

A rare Phoenix house museum, Wrigley’s Mansion, built in 1932 by Chicago’s Wrigley chewing gum family, offers tours daily. Perched on a rare mid-city hill, the residence with commanding views was once the Wrigley’s winter home. The mansion also offers a private club membership for only $20 a year. Members can drink and dine at the restaurant and benefit from a private club experience that includes valet parking service. 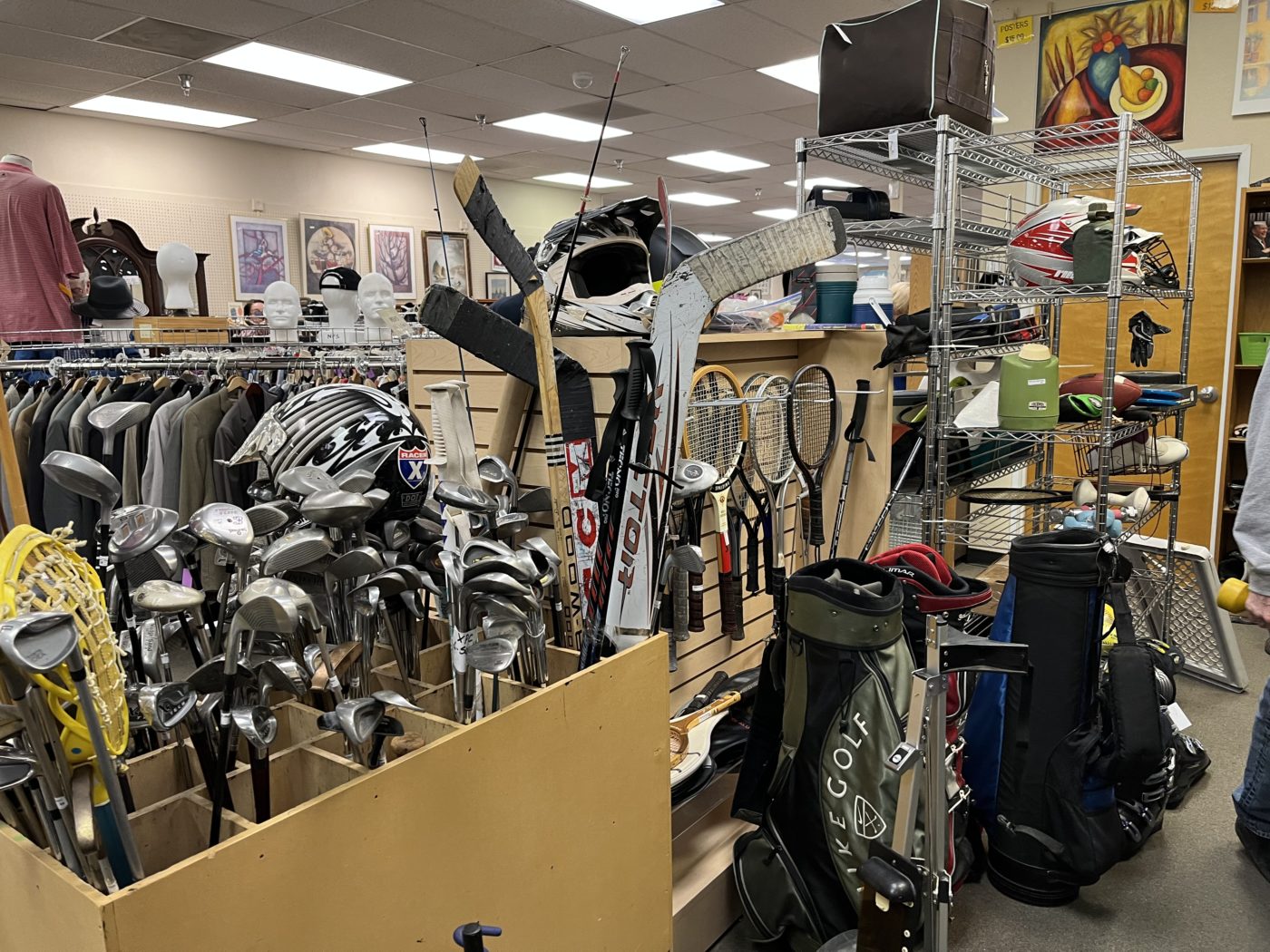 Plenty of good will here at the store… These retired golf clubs don’t want to stay retired!

The Phoenix area is an absolute extravaganza for thrift shoppers. In fact, Los Angeles professionals go there to find items on the cheap to bring back to their California second-hand, vintage, and thrift shops. A few Goodwills are exceptional, notably those in the north Scottsdale area. This is a great place to buy “retired” golf clubs and literally anything else under the sun. Prices are exceedingly low, like a brand-new Nike T-shirt with tags attached for $2.99.

An Old Scottsdale landmark since the 1970s, this family-run business is a must stop for a squash blossom necklace, concha belt, blanket, basket, and other Native American items. Here you’ll also find old pawn and vintage jewelry and can rest assured it’s the real thing and not a nearly indistinguishable repro. The Heard Museum Shop also sells vintage Native American jewelry though at museum price points.

Antique malls are football field-sized here. One of the largest antique malls in the country, the Brass Armadillo has a seemingly infinite supply of antiques and collectibles. There are well-priced deals on multi-piece vintage Johnson Bros. dinnerware, Haviland, and other notable brands, one assumes from back in the day when extended families dined together. Well worth the cost of shipping home. 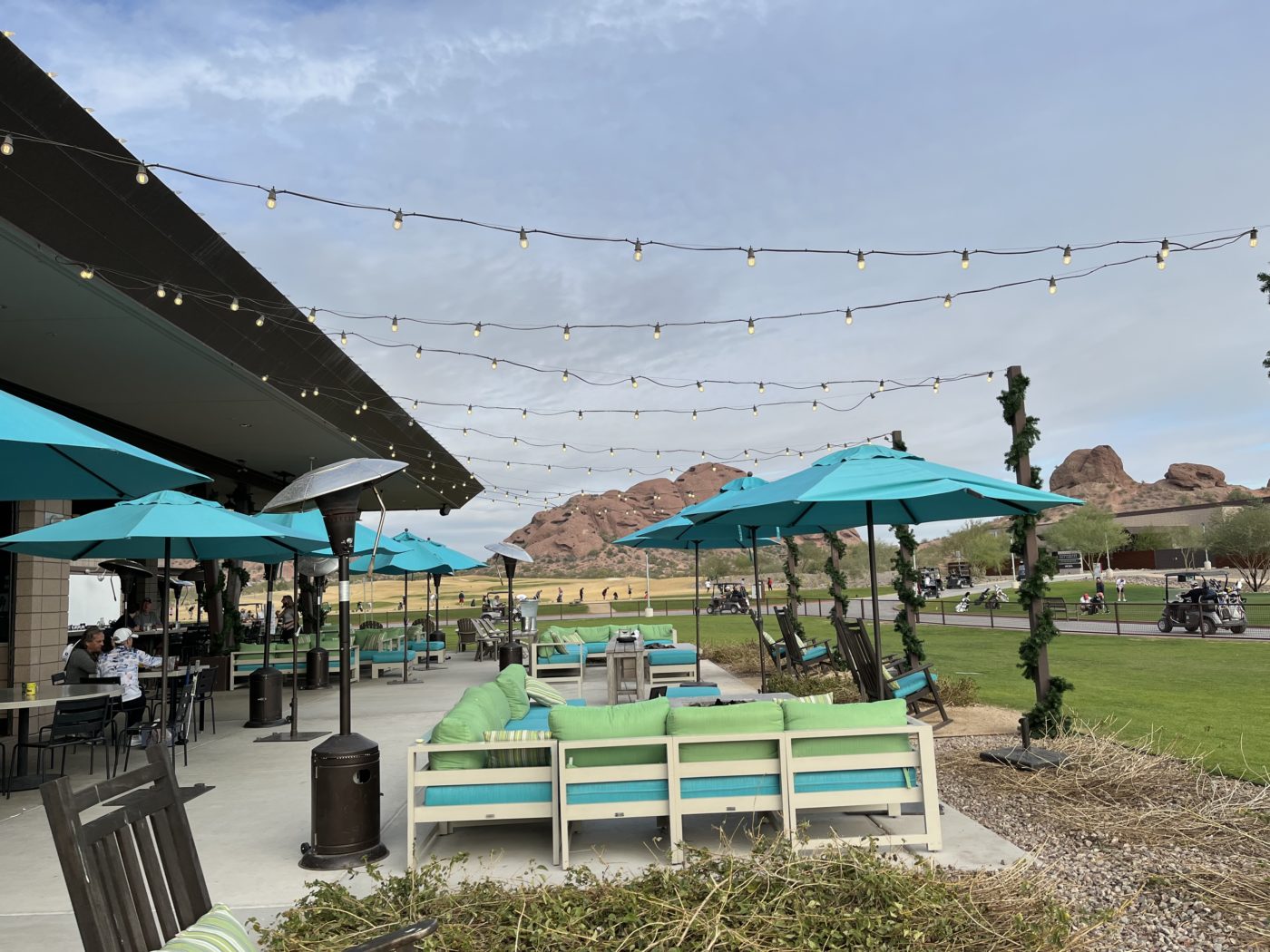 In a city full of bright and airy spaces, Durant’s stands out as being a little louche in décor — and locals love it all the better for its vintage bordello inspired ambience. A classic steakhouse and Phoenix landmark for over 70 years, it’s located on main drag Central Avenue, close to downtown business venues. Hence, the bar is a place to have the perfect martini and rub elbows with anyone from professional creatives to business execs and newscasters who work nearby. The atmosphere is nostalgic: a bit red velvet, shrimp-shaped vinyl-covered booths and dimmed lights. The steakhouse is classic old-time Phoenix at its best.

Part restaurant and part vintage furniture shop, this is where in-the-know Phoenicians like to hang out, whether it’s Sunday brunch with bagels and a copy of The New York Times or dinner with Mexican inflected elote pasta and a glass of Lugana Friuli wine (great choice, by the way). The sleek open-air concept is unpretentiously modern and snug at the same time. Phoenix is that rare place where the boho crowd is friendly and engaging — much like the rest of Phoenicians who always have time to convo with a stranger.

Renata’s Hearth is the latest restaurant iteration to live in a space occupied by many restaurants past in the fabled Arizona Biltmore Resort. Chef and owner Donald Hawk marries his Korean background with modern Mexican food and it’s a huge hit. Standard Mexican fare and all dishes seem to be magically infused with layers of piquant taste. After dinner, take a stroll around the famous Biltmore Resort grounds and experience Frank Lloyd Wright’s architectural design in collaboration with his colleague Albert Chase McArthur.

For the ultimate outdoor dining experience and a view of spectacular lava lamp-shaped boulders, make your way to Lou’s Bar & Grill located at a municipal golf course that’s open to all. Even if you’ve never gone near a golf ball, you’ll find a casual ambiance in this canopied outdoor air restaurant and have a view of golfers at the putting green. From hamburgers to pizzas, grilled cheese sandwiches, fries and IPA beers, this is an in-the-know stop where you’ll dine with golfers and local residents alike. 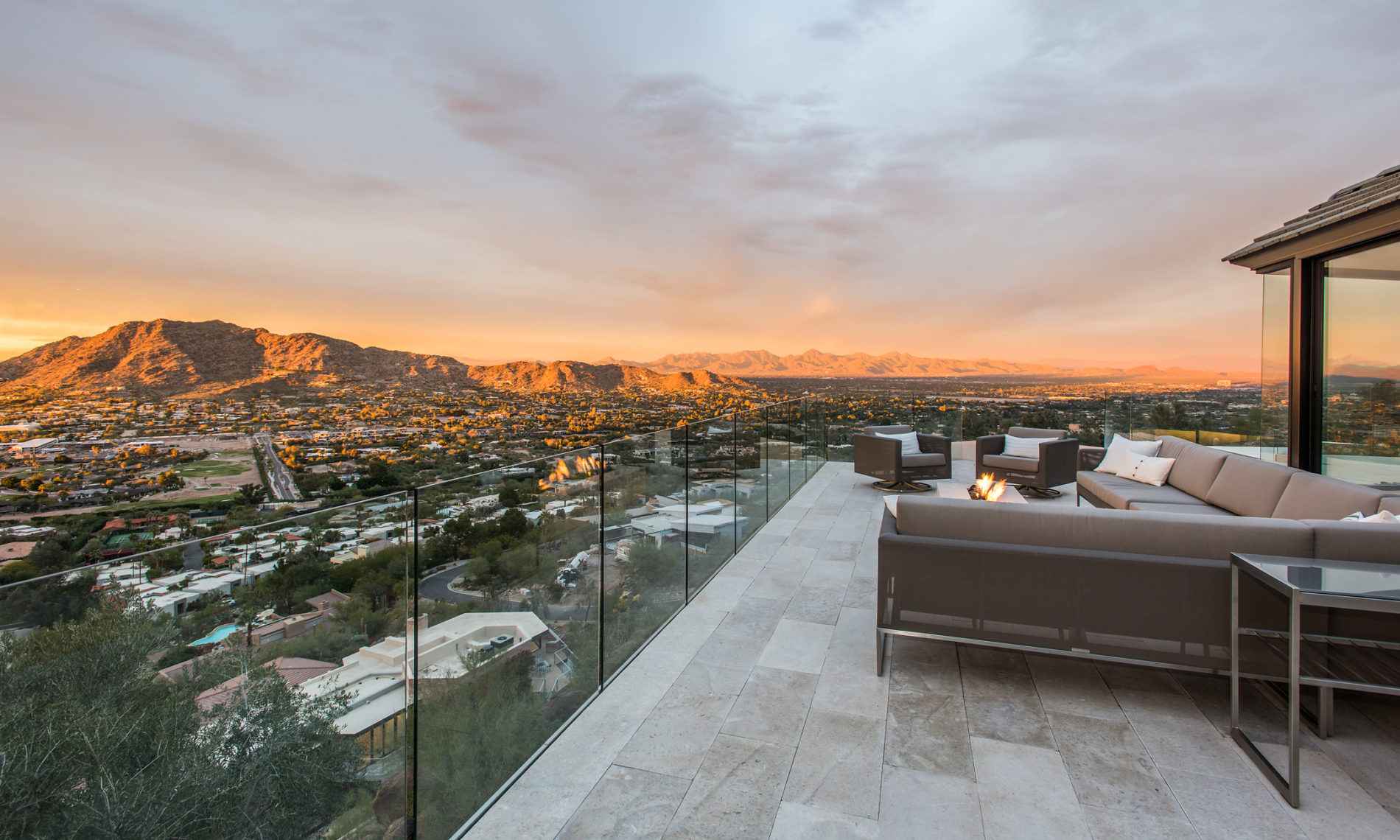 The Claredon Hotel and Spa

Calling itself “cannabis friendly,” the boutique hotel in downtown Phoenix features a hotel wing of 16 rooms where cannabis vaping (but no tobacco) is allowed. The hotel is popular with locals who dine at the Fuego Restaurant that features Latin fusion cuisine, and a hopping happy hour with live music that boasts a piano bar and musicians making guest appearances. Rooms are spacious and there’s a popular rooftop pool. The Lazy Bee Spa offers some great deals like a massage package of three 60-minute massages for $344.

For wow factor, nothing beats the Sanctuary. The architecture, in clever geometric structures, cascades down the slope and is set in abundant landscaping that includes purple flowered Jacaranda trees. The resort, with individual casitas, pool and restaurant, is nestled next to Camelback Mountain. Don’t miss the panoramic view at the Jade Bar or dine at Elements Restaurant helmed by Food Network chef Beau MacMillan.

Golf in The Valley of the Sun. Where the locals play in and around Phoenix