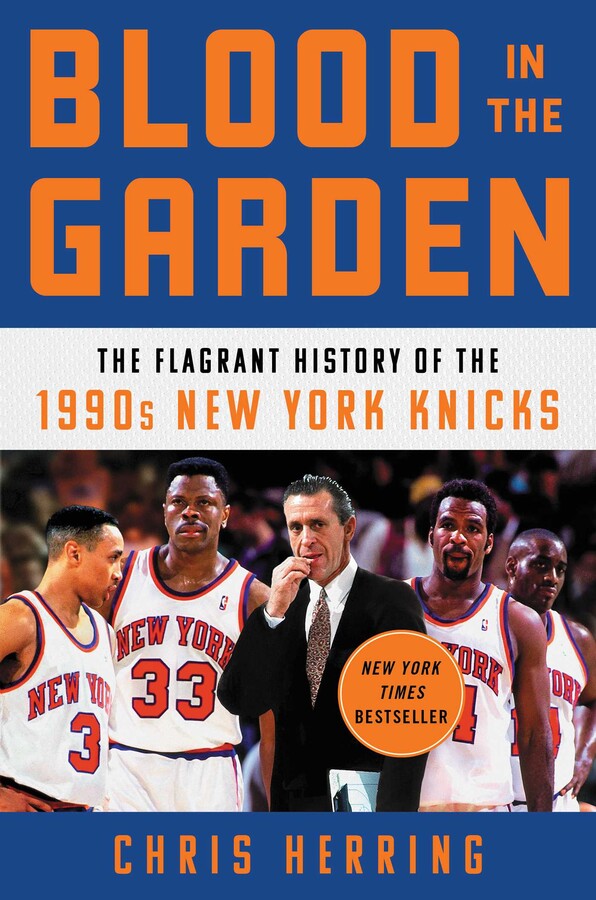 BLOOD IN THE GARDEN: The Flagrant History of the 1990s New York Knicks By Chris Herring

What’s the first thing that comes to your mind when you hear the words New York Knicks? Most likely it’s something not positive.

Yes, one of the original NBA franchises from 1946 has fallen on tough times since the start of the new millennium, but the decade right before it, they were a force to be reckoned with. They went to the NBA Finals twice – lost both times – but it was how they played that caught the eye of basketball fans, and was feared by other teams. (Some pundits say them not winning a championship makes their story more compelling.)

Once the slick-haired, Armani suit-wearing Pat Riley entered 4 Penn Plaza on May 31, 1991, he turned the Knicks into the most conditioned and toughest team in the Association. If they didn’t beat you on the scoreboard after 48 minutes, they just straight up beat you up. Don’t believe me? Go on ye olde YouTube and search “New York Knicks fights.” You’re welcome.

Their battles with the Bulls, Pacers and Heat were theater. There were the big and misunderstood personalities of Patrick Ewing, Xavier McDaniel and Anthony Mason. As many highlights – John Starks’ “The Dunk,” Larry Johnson’s 4-point play, the phantom foul call against the Bulls – there were also some heartbreaking lowlights –  Starks’ 2-for-18 shooting in Game 7 of the 1994 Finals, Reggie Miller scoring eight points in nine seconds in the playoffs, and, perhaps the worst, Charles Smith missing layup after layup against the Bulls, also in the playoffs. And, of course, there was the off-the-court drama between Riley and management and ownership.

The NBA has certainly changed since this era, becoming less physical; and the Knickerbockers becoming a circus. But for nearly 10 years, The Garden was home to some of the greatest basketball ever. 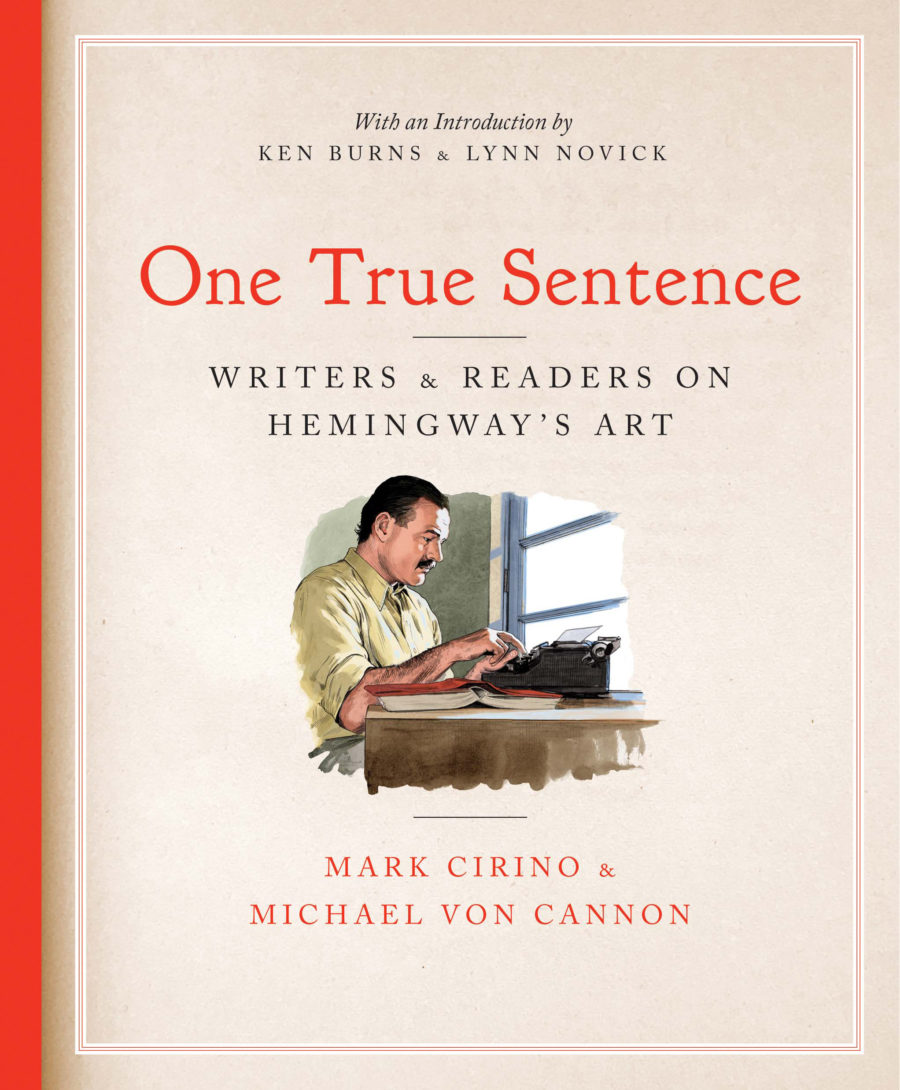 Each of the 38 interviews in One True Sentence begins with a contributor’s very favorite Ernest Hemingway sentence and why that person chose it. Hemingway, who won the Nobel Prize in Literature in 1954, is one of those 20th century names like Pablo Picasso or Albert Einstein that nearly everyone has heard of – even if they’ve never read one of his novels or short stories. The author’s complex life and body of work is an ongoing source of fascination for readers and scholars. Though his particularly dramatic life often neared overshadowing his work, Hemingway’s writing is admired for its realism and genius which indeed shook up the florid, adjective cobwebs of literature that came before. As English professors (and I’m one) will attest, Hemingway’s writing strongly influences how Americans are taught to write today: with clarity and directness – no noodling around – just subject, verb, and object.

Editors Mark Cirino and Michael Von Cannon who are English professors and Hemingway aficionados, decided to query a group of experts – most of them culled from their excellent, yes, you guessed it, podcast on Hemingway called  One True Podcast – and put together a medley of Hemingway’s greatest hit sentences. The book has some surprises along the way. Who would have guessed that a few of the writers choose the very same “true” sentence? You’ll have to read the book to find out which sentences they are.

In addition to the fascinating array of commentary and answers to all kinds of niggly questions you might have wondered about, there’s a lot of erudition in this collection that reads like a fun conversation – almost like a podcast! Along the way, the contributors often reveal heartfelt confessions of their own, stirred by their contact with Hemingway’s writing and what it means to them. It’s good to know there are people who still believe literature has the power to change your life. Because it does. Perhaps we still connect to the great author because we all have a bit of Hemingway inside us – something inviolable and true.

Out of print books we love…

Out of print books are recyclable and inexpensive. If you don’t mind reading on a screen, they can even be downloaded for free. No virtual strings attached.

A MOVEABLE FEAST By Ernest Hemingway

A  Moveable Feast, the posthumous book his widow and fourth wife Mary edited and arranged was published in 1964, and since then every syllable has been parsed, and it’s known that Mary gave the book its title – a phrase from one of Hemingway’s letters. Purists consider it sacrilege that Mary altered the order of some chapters and published segments Hemingway didn’t want included and removed others like his comments about leaving first wife Hadley to marry her good friend Pauline.

Wives and Hemingway’s sad demise aside, the memoir of his youthful days in Paris when he was young and poor is simultaneously an elegiac and a happy story because he often writes he was happy then. Though too poor to buy books he borrowed them from Shakespeare and Company’s “library,” and through scrimping and saving, he managed to live and eat well and go on skiing trips to the Austrian alps with Hadley and their son, when lodgings cost $2 a day.

Reading the memoir you’ll recognize the origin of very famous quotes. For example, Ezra Pound taught him “to mistrust adjectives as I would later learn to mistrust certain people in certain situations.” His now legendary portraits of famous personages like F. Scott Fitzgerald, Zelda, and Gertrude Stein are as succinct and piercing as a plumber’s snake. Fascinating are glimpses into conversations Hemingway has with Ezra Pound when they discuss Russian writers and Hemingway says Dostoevsky “almost never used the mot juste, and yet had made his people come alive at times, as almost no on else did.”

After reading the 1964 edition and ignoring all the hoopla and metatext about it, one can go on to deeper exploration and read the “restored” edition of the book that includes more original material, that was published in 2010 and edited by Hemingway’s grandson. And for viewing, there’s “Midnight in Paris,” Woody Allen’s take on expat life during the 1920s.

Best to ignore all the marginalia and read the memoir for what it is, with its many now-enshrined sentences like “there is never any ending to Paris and the memory of each person who has lived in it differs from that of any other.” There is a powerful poetic beauty in the prose that is as honest and true as the author aimed for; and therefore the work lives on. The book casts a spell as we too believe, if only for the duration of the reading, that love and the good life can come cheap, like the carafes of house wine Hemingway drank at his hangout La Closerie des Lilas. The restaurant is still there in Paris and the bar is named after him.