It was our Millennial son Paul’s idea to take a few days off from his job to see the snow. His new home, Madrid, carved by Castilian kings from a dry, desert climate, didn’t deliver the white Christmas he craved. I was the one bent on living out my Iditarod fantasy, so I urged my typically sedentary family to enjoy more than the hotel spa. To my surprise, both my husband Patrick and Paul eagerly agreed. As with most things, we sent Paul on a mission to find the ultimate winter destination.

Cue Aramon-Formigal, in Huesca, Spain, in the Aragon region of the Spanish Pyrenees. A mouthful of a description for what is essentially a one-horse town, though the region itself is inaccurately represented: Decidedly unglamorous and bereft of celebrities compared to Aspen and Jackson Hole, radically lacking in hotel chains unlike the Alps and somewhat of a wallflower to its next-door neighbor, the French Pyrenees.

It’s sadly undeserved. The Spanish mountain region is no slouch when it comes to well-groomed pistes, boasting several resorts and challenging slopes for beginners and advanced skiers. Also, fun fact for the royalty obsessed: Before King Felipe VI of Spain was troubled with issues of Catalan independence, he and the rest of the royal family skied in Baqueira-Beret, in the Aran Valley. 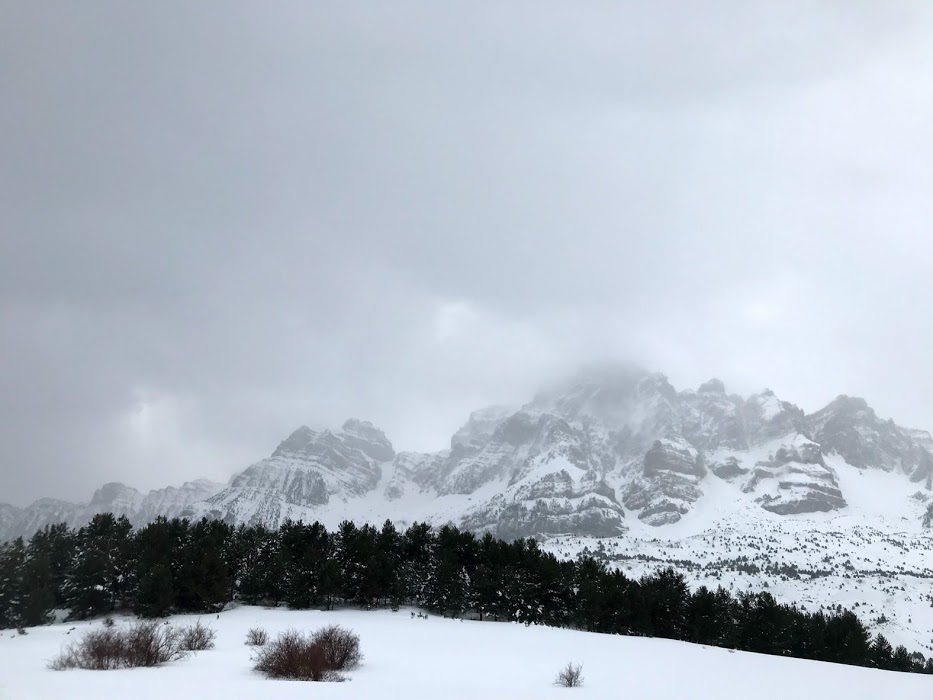 Top of the world, ma! The sweeping view is worth the pain…

The first morning at our hotel, Hotel Saliecho, we encountered a full breakfast spread in the hotel lobby, where Patrick ordered his usual omelet and nibbled on a few pieces of kiwi.

“We’re just driving the snowmobile for a bit and then the dogs are going to pull us,” Patrick said. “Not like we’re exerting any effort.”

“Well, I don’t think it will be that easy,” Paul said.

By the time we drove to Tena Park for the dogsledding, the morning’s gentle snowfall turned torrential. It snarled the mountain traffic and made the roads less navigable.

Patrick looked ahead. “Doesn’t seem so bad,” he said. “I don’t think we need them.”

The rest of the drive yielded variations of the same conversation, as Paul entreated Patrick to put on the snow chains. I watched a group of four men, wrestling with their car in a snowbank on the left side of the road. “I think we should pull over,” I said.

Búb, short for Búbal, unwittingly sloped upward at a 45-degree angle. The ground was covered in 4 inches of slush and the car wouldn’t budge.

Patrick sighed. I resolutely stayed in the car for nearly 30 minutes, while the two of them pulled up YouTube videos and debated how best to attach snow chains on a car that was stopped on a narrow road.

“Success?” I asked as they both huffed and re-entered the vehicle.

“Brute force,” Patrick said, as he revved the engine.

By the time we reached the meeting point, we were more than an hour late for our original time slot. The snow had turned to sleet. The area seemed filtered in black and white, the only spot of color a red gasoline pump. The silence was impermeable. I noticed snowmobiles but no dogs.

“So we’re taking these snowmobiles up the mountain,” Paul said. “We meet the dogs on the plain and then snowmobile down.”

“Wait,” Patrick said. “We’re not doing everything on this open field, right here?”

Paul pointed to a mountain. “See that? That’s where we’re going,” he said.

“Are you sure?” I asked no one in particular.

Paul got on a snowmobile. “There’s only one way up,” he said.

I had never been on a snowmobile before, and much like the rest of my life, I didn’t ask too many questions before I signed on for this activity—I showed up and figured it out along the way. I hopped on, hopeful that the path was manageable. 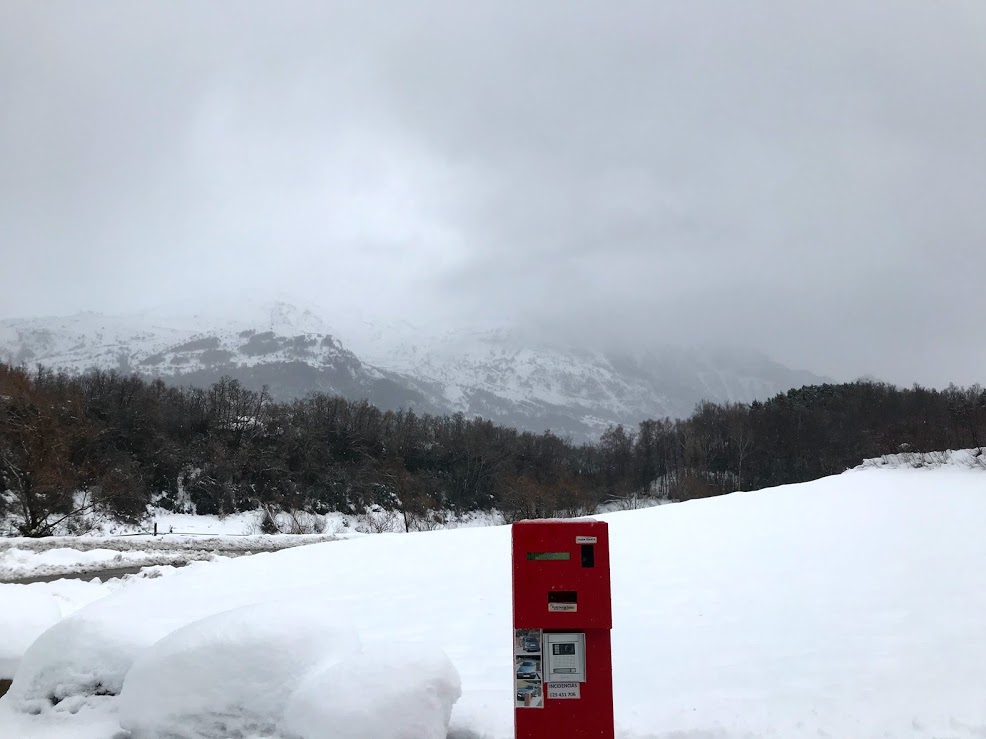 Yes, it’s a gas pump, and it’s halfway up a mountain, and it’s red

It wasn’t. It was a fire road on the mountain that felt like the width of a twin-sized bed. As we ascended, my vision impinged by sleet, I concentrated on counterbalancing the sharp curves as I calculated the amount of time it would take for rescuers to find my body. 20 minutes in, I relaxed and gunned the vehicle. My newfound confidence was costly and I landed in a snowdrift.

“Are you ok?” Paul asked as he stopped in front of me. “The guide said we could rest a bit before mushing.”

“There’d better be hot chocolate when we get there,” I muttered.

I followed them at a slow pace and breathed a sigh of relief once we arrived at another field. A small caravan was parked to the side. I powered off the snowmobile and expected a hot beverage to come shortly. My expectations, once again, were not met.

Three people on dogsleds arrived and my heart sank with the realization that our tardiness meant that the huskies—smaller and leaner than their photos on social media—were less perky and nimble. Patrick, Paul and I huddled.

“Can those dogs handle us?” Patrick asked.

“I told them we were ‘American sized,’” Paul said.

I counted the dogs hitched to each sled. “Four dogs each? That’s not enough,” I said.

A guide we hadn’t seen before arrived, lugging a black nylon sled, markedly different from the sleek wood ones occupied by the previous patrons, along with two other dogs.

“Maybe they’re bringing more for each of us,” Patrick said.

Paul shook his head. “I don’t think so.”

The new guide, John, a compact man I presumed was the dogs’ keeper and therefore the alpha, proceeded to give us bilingual instructions as the rest of the guides placed Paul first and me second as Patrick rounded up the rear with the black sled and five dogs.

The rest of the work seemed simple enough. The middle metal brace served as a brake with grated teeth that tethered to the ground and required the full weight of one’s boot to employ a full stop. It was also a way to slow down, through a series of measured, consistent pumps.

I was ready to rush headlong into the open field, stretches of fresh snow ahead of me.

“We’re going up the mountain,” Patrick said. “Weren’t you listening?”

“I thought we were doing the mushing here,” I said.

“Is it going to be like the road that we went up on with the snowmobiles?” I asked.

Paul asked the guide in Spanish. “Yes and no,” Paul said. “Did you just want to stay here?”

The sleet had turned into a snowstorm. I debated whether the four dogs pulling my sled would be more or less controllable than the snowmobile. Patrick went up to me. “It’s ok if you want to stay here,” he said. “Maybe one of us can stay with you.” I couldn’t let them miss out because I was feeling lazy. “Nah, let’s do it,” I said. “Vamos!”

Nothing happened. The dogs didn’t move. Instead, they were licking the small piles of snow around them.

“Are they thirsty?” I asked John.

He didn’t answer. Instead, he ran the length of the three dogsleds as he yelled, “Vamos, chicos!”

Eventually, the dogs were up and running. Until my pack stopped to examine the markings left behind by the one in front of them.

Patrick eventually caught up with me. “Why’d you stop?”

I gestured to my pack, gleefully preoccupied by the snowbank closer to the face of the mountain. 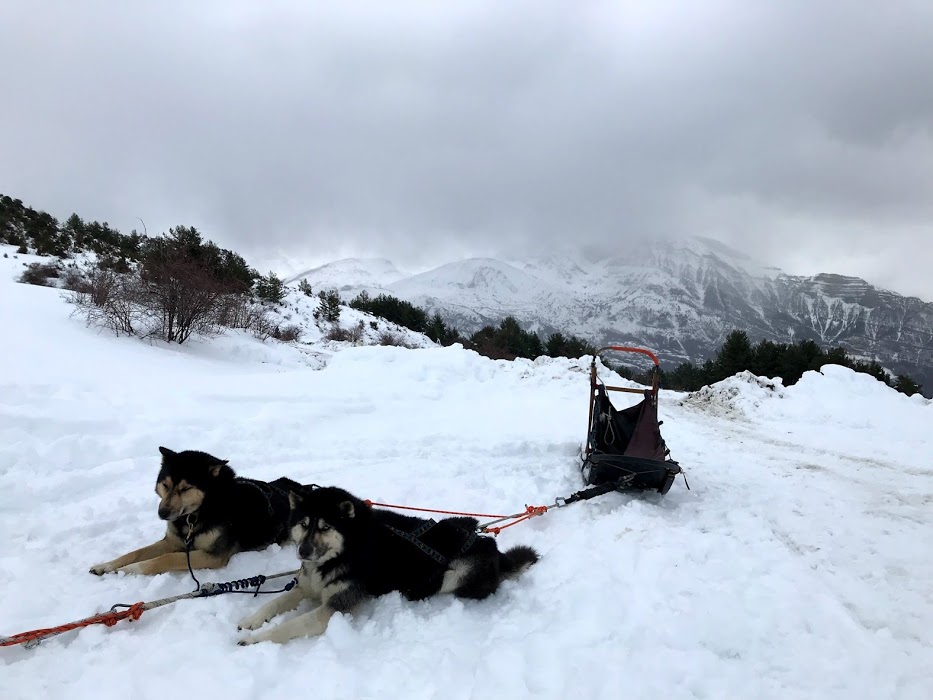 Downward dogs: These guys are resting before the return trip

Suddenly, Patrick’s top dog started growling; a cream-colored beauty with gray eyes, she was the pick of the litter and knew it. She moved closer, causing everyone’s ropes to get entangled. Soon, all nine dogs were barking at each other.

“Sierra!” John yelled. He moved closer and motioned to another guide on a snowmobile. They calmed down each dog and detangled the ropes.

The rest of the climb was strenuous; my foot kept getting caught in 5 inches of fresh powder as the dogs kept stopping to lick snow. John kept a running pace beside me.

“Me, too,” he said. I realized this was why he kept a lanky frame. He probably spent most of the winter running beside overindulged tourists whose expectations weren’t exactly being met, like me. I felt the familiar combination of ennui, FOMO and guilt, so I shook it all off, determined to finish the rest of the activity.

“Vamos, chicos,” I said, as I pedaled the snow with my foot. It was like riding a skateboard. The dogs responded, keeping a good pace. It was arduous work in multiple layers of clothing and copious streaks of perspiration were running everywhere.

At last, we reached the top. Far beyond the treeline, the air thinner as we worked to catch our breaths, none of us said a word as we observed the craggy peaks of the Aragon Pyrenees, stark and chalky against the gray sky, limned here and there with the colors of the mountain range. The usual superlatives about the beauty of nature notwithstanding, I was more than ready to get started on the journey downhill. John reminded us to pump the brakes on our way down.

“Why?” I asked as I detached the brakes from the ground.

The dogs’ sudden movement answered me. Downhill, they didn’t need any encouragement, as they raced without any inhibitions. To say that the feeling was glorious is an understatement. All previous labors were forgotten as I found speed and sure footing in a snowstorm. The sheer drop of the mountains below were of no consequence. Here was my Iditarod fantasy fulfilled.

Need a dose of nostalgia? There are adult summer camps for that 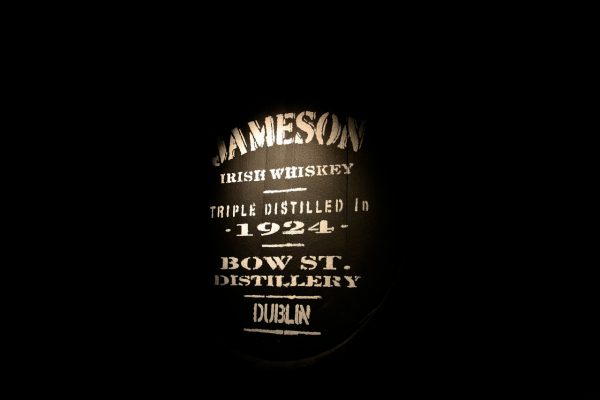