For all the physical exhaustion and labor that you actually pay to do, a hands-on cooking lesson may offer the best value for experiential travel.

Before you can even sink your teeth into the food you cook. Before you roll out the dough for the pasta. Before you even step foot in the country, you need to have the mindset of wanting to learn, wanting to take something away from this experience. Most experiential travel can’t be brought home but cooking lessons can be. They’re more than just eating a good, authentic meal. A cooking lesson is real work. You’re going to get your hands dirty – and you should want to – you’re cooking for strangers, there may be a language barrier to overcome. But once you tie on that apron and eventually indulge in your own creations, you realize it’s all worth it.

When planning your cooking lessons, correspond as much as you need to with your host prior to arriving to find out the type of classes they offer, type of dishes you’ll be making, if they can accommodate dietary restrictions. Tuscany may be a region where time has forgotten, but these hosts have embraced technology and boast fruitful websites. And think of these hosts as not just culinary instructors, but also as a guide to bringing you bliss along your journeys in their homeland. They can and will warmly recommend how to optimize your time in their town and region.

Think about how authentic of an experience you want this to be: do you just want to cook? Are you able to go grocery shopping with the host? Can you pick the herbs and vegetables in their garden? Staying with a “local” gives you a genuine and authoritative escapade; whereas an expat may try to Americanize or bastardize your culinary adventure.

Be mindful, these lessons come with a catch-22: You’ll want to be relaxed, have fun, go with the flow, enjoy a glass of wine because, hey, you’re on vacation; however, if you want to retain the info bequeathed to you you’ll also want to be hands-on to observe all of the tips and tricks and subtleties you won’t find back home or in any book. When I traveled to Tuscany with my wife, we took turns: one would take photos, videos and copious notes in our journals while the other sliced, diced, mandolined, chopped, seared and rolled and then switched. 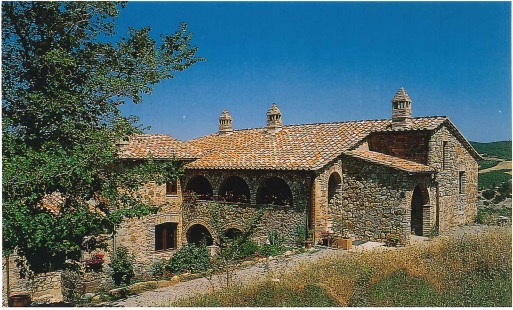 Hands-on cooking wasn’t part of my childhood. My father, who was only home for dinner on the weekends, would rather go out to the same two restaurants week after week. My mother, whose father was a chef, did what she could in the kitchen.

As part of a 17-day trip to Italy for a wedding, my wife Theresa and I planned two weeks to explore small towns in Tuscany, only staying at agriturismi, the original Italian bed and breakfasts. Agriturismi are independent farms that owners use partially for accommodation purposes. They’re scattered throughout the region and the country, like Walmarts, but with a lot less signage and fluorescent light. The former wine director of Del Posto in New York recommended one in Castiglione d’Orcia — a hamlet of a province of Siena, located about 56 miles southeast of Florence — called Agriturismo Aiole. We signed up for private cooking lessons with the proprietress, Noella. 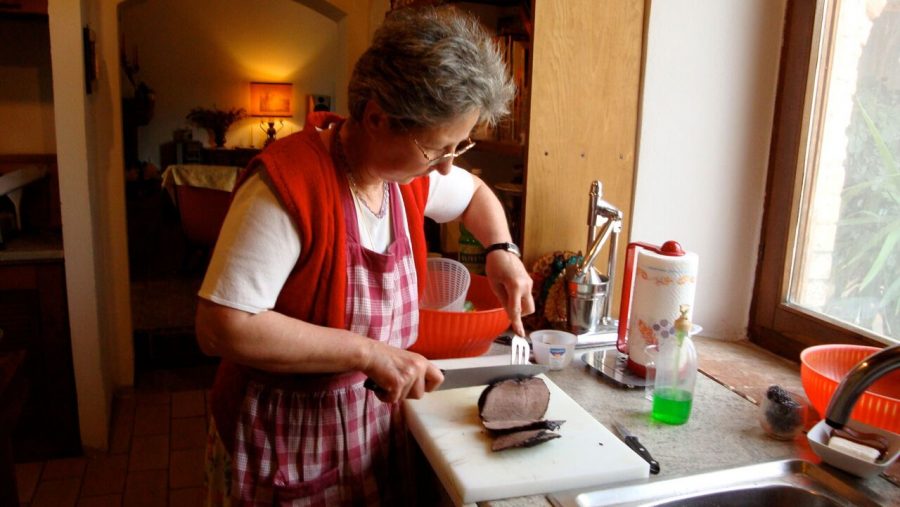 Rolling up onto the grounds of the stone-exterior Aiole, you’re hit with a bucolic view. Olive trees on the hillside, tended to by Noella and her husband Paolo, surround you. The olives are picked by Paolo in November and you get to join in if staying there during the harvest. Otherwise you’ll still get to taste the oil — along with any herbs, vegetables and fruit from their garden and nearby woods — in all the dishes you cook in the kitchen, epitomizing farm-to-table.

After being shown to our room, just down the hall from the wild boar taxidermy hanging on the wall, we reconvened in the kitchen with our journals and camera. Noella recommended we photograph everything—the prep, the methods and tips, the finished products—because her Japanese guests do it, who apparently learn Italian easier than English. So, when at Castiglione d’Orcia, do as the Japanese do….

Pots and pans hung on the wall. Tools, mostly wooden spoons of varying sizes, were strewn throughout. Stacks of old cookbooks were homed on an open shelf in plain view, but took on the air of “just for show.” The furniture looked like it was only available in the vintage section on Etsy, but it was handmade in pick-a-century from the previous millennium and the fine craftsmanship meant it has never been refinished, repainted or even moved. The rusticity, and disorganization was an expression of authenticity.

After tossing on aprons that resembled a smock — Paolo couldn’t stop smirking at the one I went with — we proceeded to spend the next five hours being schooled in the more bona fide rather than finer points of Italian cookery; mainly rolling dough for fresh pasta.

The first pasta we made was pici, a thin, rolled pasta. The secret to making pici was to roll it out on the flour spot on a rectangular large wooden board and to roll with just one hand, as two hands will stretch it out. Mine turned out to be too big. 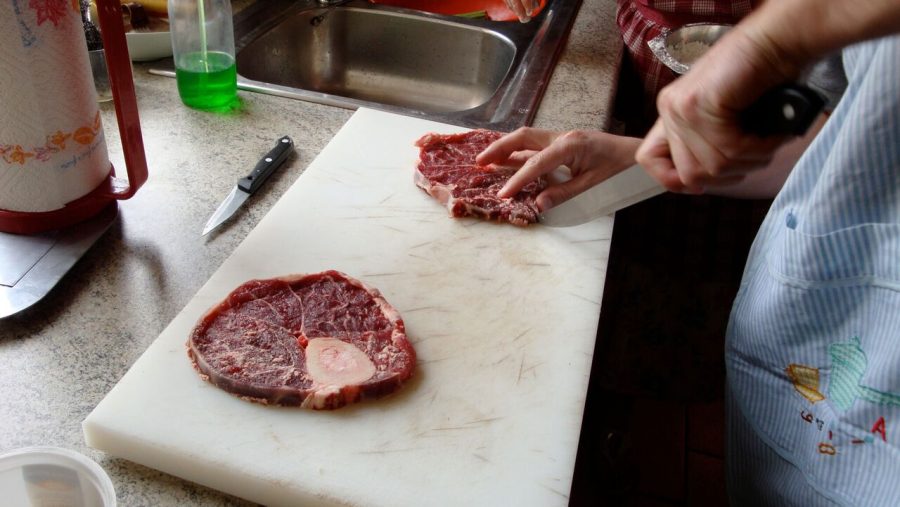 Then we moved on to osso bucco. The trick to making it was snipping the ends of each piece with kitchen shears so that they don’t curl up on themselves, and so remain flat while cooking. And get yourself a mezza luna (half moon) to dice herbs and garlic. Next up was stracotto di manzo (roast beef) with pears. Noella recommended using cappello del prete. It’s the best cut of beef, found in the shoulder muscle. It’s known in English as beef chuck. Sounds better in Italian.

Despite all the experience we have had cooking for ourselves and large parties, we were overwhelmed with the lesson. The cooking was physically exhausting and I was showing it, so Noella had us take a break. We actually went to take a nap for 30 minutes, then returned to make potato gnocchi, which I was really good at: ball it up and run over the grooves of a fork. The holes made by the fork allows for the sauce to latch on.

Everything we cooked was served at dinner, for everyone in the house: the other guests Francesco, Luela and their young children, Noella, Paolo and their daughter, Giovanna, and us. The nine of us congregated at a long communal wooden table where English and Italian was spoken, with everyone getting along and getting to know one another, with the sound of Italy’s ESPN in the distance, which oddly enough was playing a Chicago Cubs game. 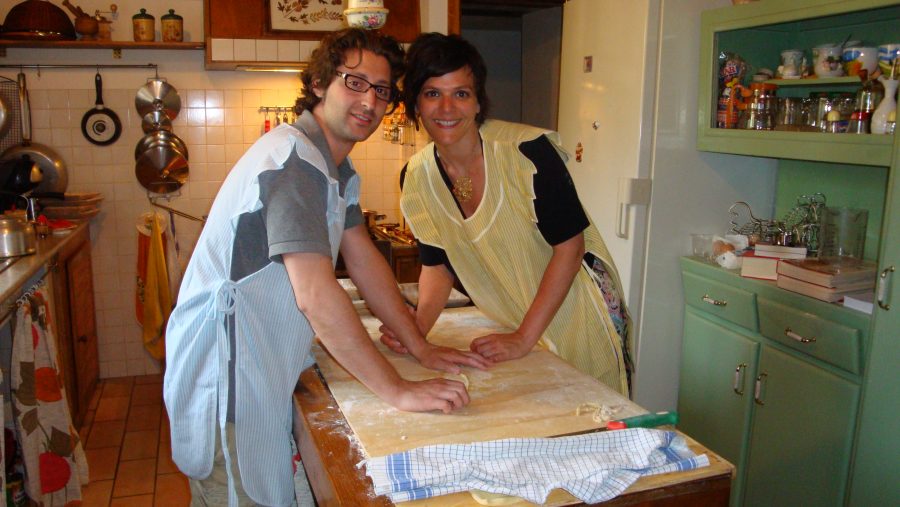 I had no idea what to expect at Aiole. You forget that you’re in someone’s home, where they sleep, shower, bathe and children play with their toys. The kitchen where we had our lessons is the same where Noella cooks meals for her family when there are no guests. The family dynamic was uncomfortable. Paolo, a slightly built chain-smoker, wore the same military green jumpsuit every day of our stay. He knew his place wasn’t in the kitchen so he spent most of his time watching television after handling any manual labor around the farm. Giovanna, like her father, loved cigarettes and wearing the same clothes. Throughout our stay, she appeared to be ill and would shuffle through the kitchen during our lessons. We acclimated and embraced the dynamic over the course of our stay, realizing immersion in the personal lives of the owners sets agriturismi apart from other accommodations, for better or worse.

Noella relied on memory while teaching us to cook. She would cite visual and olfactory cues as to when things were just right. The freedom of trusting one’s own ability to measure, to tune into your body and be present to what the dough/sauce/meat was telling you as opposed to a strict recipe with a calculated ingredient list is what sets these lessons apart from a traditional cooking school. The translation of the recipes even became less and less exacting as the dishes unfolded. Journal entries such as “toss it, jump it, give it some color, a splash” became second nature as we sought to capture her homespun expertise.

The next afternoon we cooked a guinea hen dish and pasta cooked in boiling water while wrapped in a dishtowel. We were the only guests paying for lessons, so a bit of irritation set in when Luela was moving in on them, but we let it pass. The second half of day two was gnocchi again, this time spinach with ricotta and nutmeg. We also made fettuccine, which was easier to make than I thought, and a torta di mele di Ida—Noella’s friend’s Ida’s apple cake—for dessert. (God forbid she didn’t give Ida credit for that apple cake!) We also made a four-flavored latticed crostata that would be part of the next day’s breakfast. 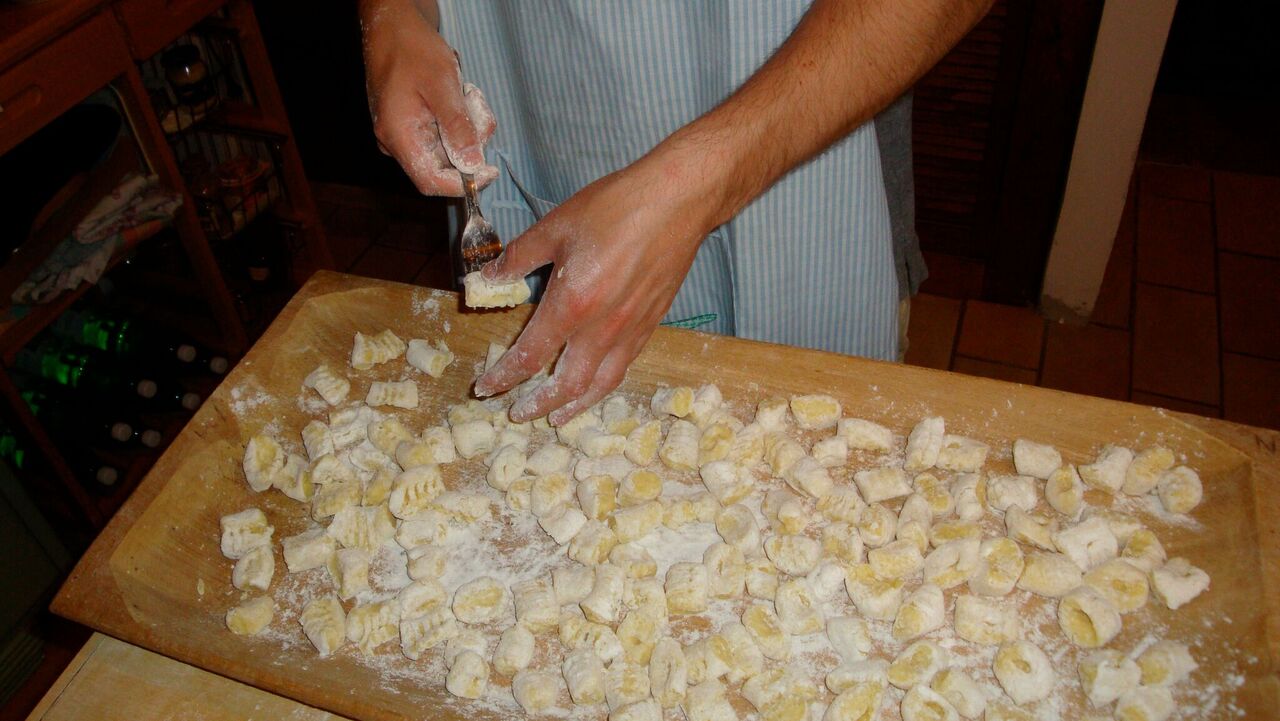 How little gnocchi are born

We spent many hours cooking for people we never met before, and may never see again, and we realized that the eating of these dishes was secondary. But aren’t all end-results in experiential traveling like that?

Of all the experiential traveling I’ve done, I couldn’t take back the skydiving from Australia except for an overpriced DVD that’s somewhere in our apartment. Prosting at Oktoberfest can only truly be done in Munich. But the lessons I learned in an Italian kitchen nestled in the hills of Tuscany can be forever tasted.