James Baldwin is one of the pillars of 20th century American literature, a Colossus on the same plinth as Hemingway, Faulkner, O’Neil and Steinbeck, although never recognized as such during most of his lifetime, and not a Nobel laureate like the others. He was black and gay, in a far different America than we know today, an America that was deeply racist and fiercely homophobic. As a result he spent most of his adult life abroad, particularly in France, where he had a home in Saint-Paul-de-Vence, in the Alpes-Maritimes, part of the Provence-Alpes-Côte d’Azur region.

So clearly prophetic and far ahead of his time, this gentle, eloquent looking man became friends with Malcolm X and Martin Luther King, Jr. and understood both sides of the modern revolutionary coin. He was born in Harlem in 1924. His mother remarried, to an abusive reverend, and eight more children followed. James was the eldest so he had to take care of them all. He realized he was gay as a teenager and found solace and sanctuary in the church, starting to preach at the age of fourteen.

In 1942 he graduated high school in The Bronx where he’d edited the school magazine alongside Richard Avedon, who became one of the greatest photographers of the 20th century, and he quit the church. His white female teacher named Bill (Orilla), had guided him to books and Hollywood movies that would come to influence the rest of his life.

A year after graduating high school, James’ abusive stepfather died of TB. His funeral was on Baldwin’s 19th birthday. Feeling ostracized in his own country, not only by the extreme racism but being gay — this was the unsympathetic 1940s — he yearned to be released from the social terror happening in America. So in 1948 he bought a one-way ticket to Paris, with $40 in his pocket.

He felt he could blend in in Paris, that the French were more tolerant and would accept him for the human being that he was. He was right. He stayed four years on his first trip, becoming involved with cultural radicalism in the trendy Left Bank area, publishing his work in literary anthologies. He learned French.

Because of his experiences outside of the US he started to become known as an influential exiled writer, instead of just a black writer. His first novel, the quasi autobiographical Go Tell it on the Mountain, was finished in Switzerland in 1952. “What white people have to do, is try and find out in their own hearts why it was necessary to have a nigger in the first place, because I’m not a nigger, I’m a man, but if you think I’m a nigger, it means you need it,” he said around then. 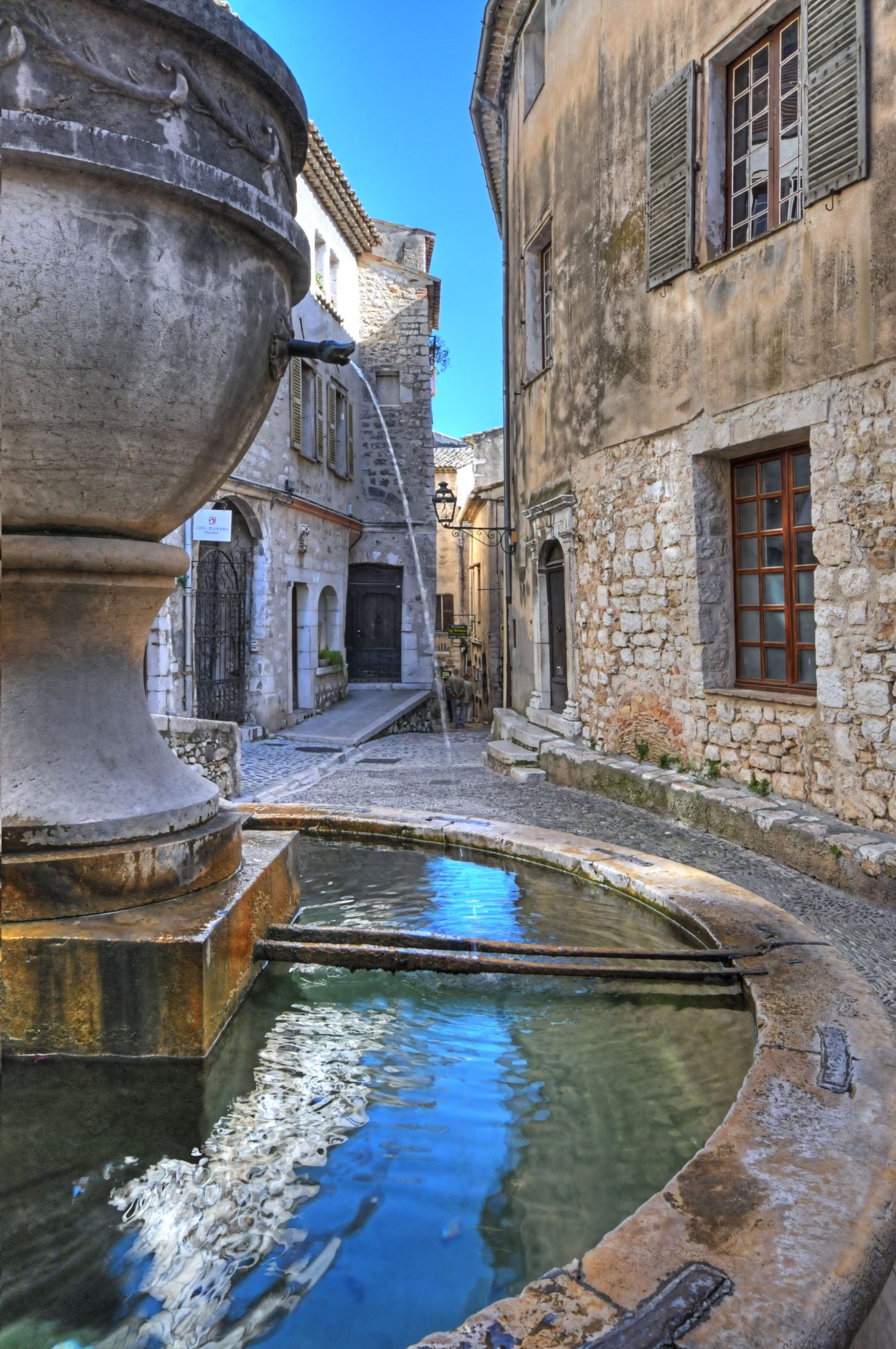 A fountain in Saint-Paul-de-Vence

In 1957, back in America, he started to make trips to the south, participating in the civil rights struggle and it was then he met Martin Luther King, Jr. He traveled and he wrote, spending some time in Turkey, Africa, then back to marching on Washington.

J Edgar Hoover, head of the FBI at the time had declared him dangerous as, “he was believed to be homosexual”. Talk about the kettle calling the pot gay!

After the sudden assassination of his friend Martin Luther King, Jr. in 1968, Baldwin retreated back to France, to Saint-Paul-de-Vence. An honest critic of his own country, a philosophical  prophet not appreciated in his own land, Baldwin once said: “It struck me the emotional poverty in America, so bottomless, and the terror of human life, or human touch. America’s terrified of their private self.”

He also famously said “Black people come out of a history that was never written down… And we have lived through a slave rebellion…. Whites don’t know their history. American white people have myths about themselves.”

His enclave on a hill was 15 minutes from the Mediterranean Sea, an hour from the mountains, and 25 minutes to Nice airport.  The only things chirping here were cicadas, so we can see why this would become his home for the next 17 years — a 300-year old farmhouse on a 10-acre plot. He called it the spread.

Since the mid 40’s and because of Saint-Paul-de-Vence proximity to the festival circuit, its laid-back vibe has attracted many artists, from Picasso to Chagall, to The Rolling Stones bassist Bill Wyman, who has a pad there. 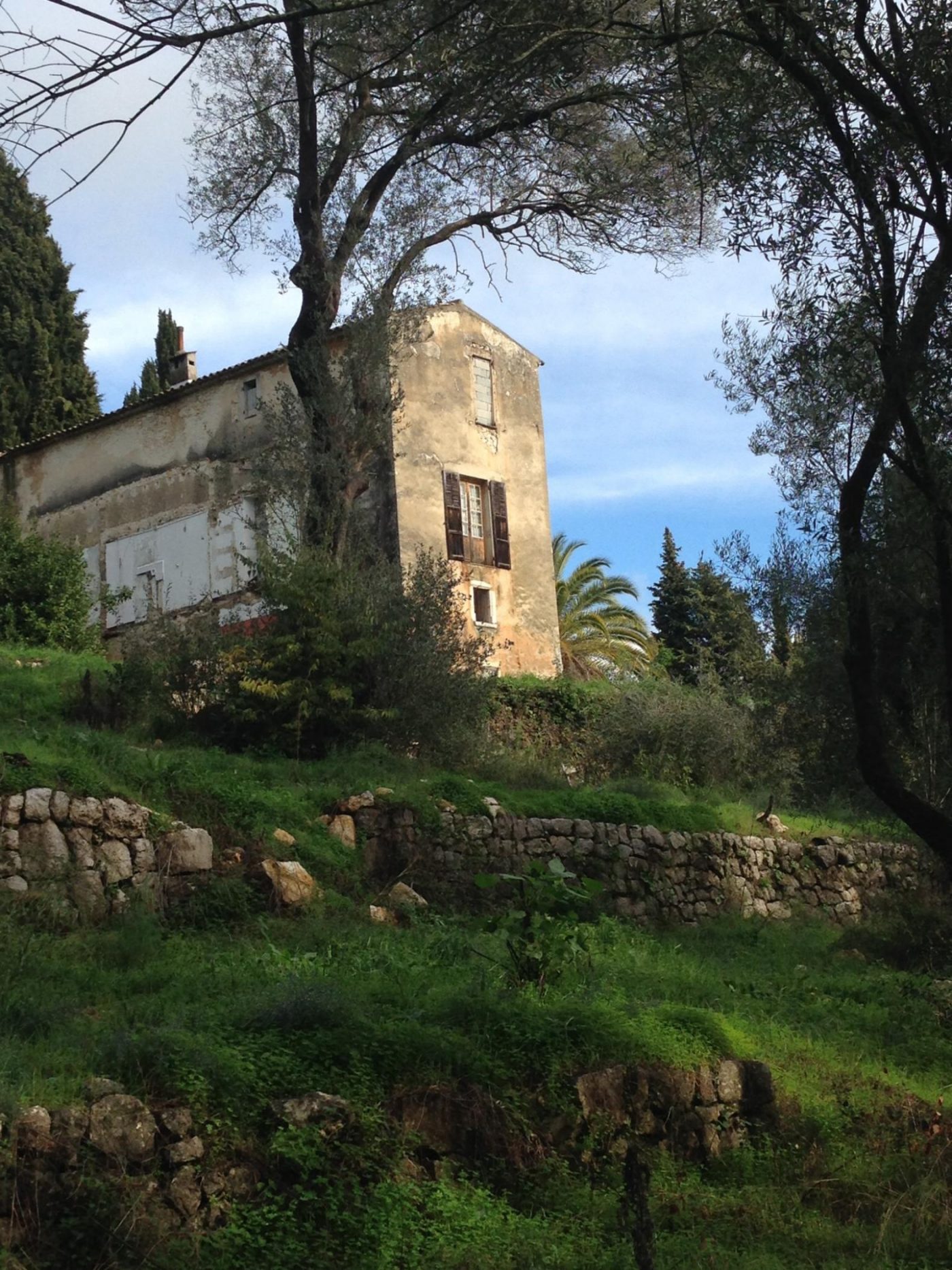 Sadly, what was left of Baldwin’s spread

Many of Baldwin’s friends playing the jazz festivals would swing by — Miles Davis, Nina Simone, Ray Charles, Ella Fitzgerald, as did Yves Montand, Sidney Poitier, Harry Belafonte, and his great friend Marlon Brando. His home was a true hive, a haven, where he could finally feel safe, and what a great party to be invited to!

In his autobiography, Miles Davis wrote that he and Baldwin would “get comfy in that beautiful, big house and he would tell us all sorts of stories… he was a great man”.

Among his haunts were the bar at the hotel La Colombe d’Or, where you can still stay or dine. It also houses a masterpiece art collection from the many famed artists who would gather there, such as  Miró and Picasso and the Café de la Place where you can play boules in the square outside.

For a few years Baldwin’s old farmhouse has been embroiled in a conflict between conservationists who want to keep it as an artist’s retreat, and a construction developer who wanted to demolish it. Sadly earlier this year the developer, who had more money won. The project is due to be complete by summer 2019 and will include 19 luxury condos priced between 1 to 2.5 million euros each, a gym, an infinity pool and a sauna, on the hillside land, where James Baldwin lived. The project is called ‘Les Jardin des Arts’ The Garden of Arts.  Sotheby’s are brokering the sales and some condos are already reserved.

Baldwin wrote several of his last works in Saint-Paul-de-Vence, and died there in December 1987.

Not much has changed in the medieval village — cobbled hilly narrow streets, small boutiques, restaurants and art galleries. La Colombe d’Or and Le Café de la Place. It’s still the artists’ enclave, and, remarkably off season still mostly a secret of the rich and famous.

Sadly, one could argue, not that much has changed in America either.