Walgreens on Central Avenue is now only letting people in wearing a mask. Face coverings do not count. After street cleaning was reinstated, the streets of The Heights are once again littered with used gloves and masks. 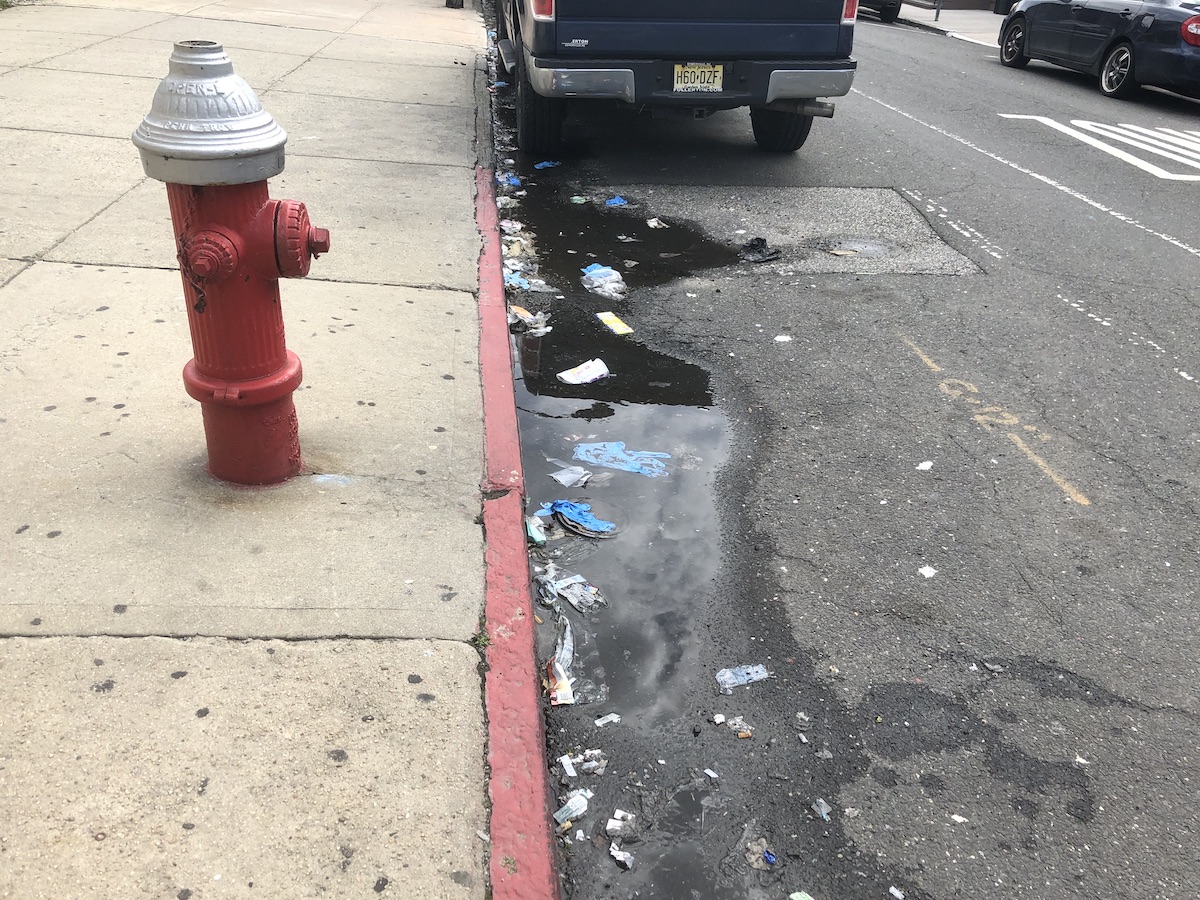 There’s glove in the streets. Some of the waste left for days in Jersey City while street cleaning has been suspended***Jason Stahl*** 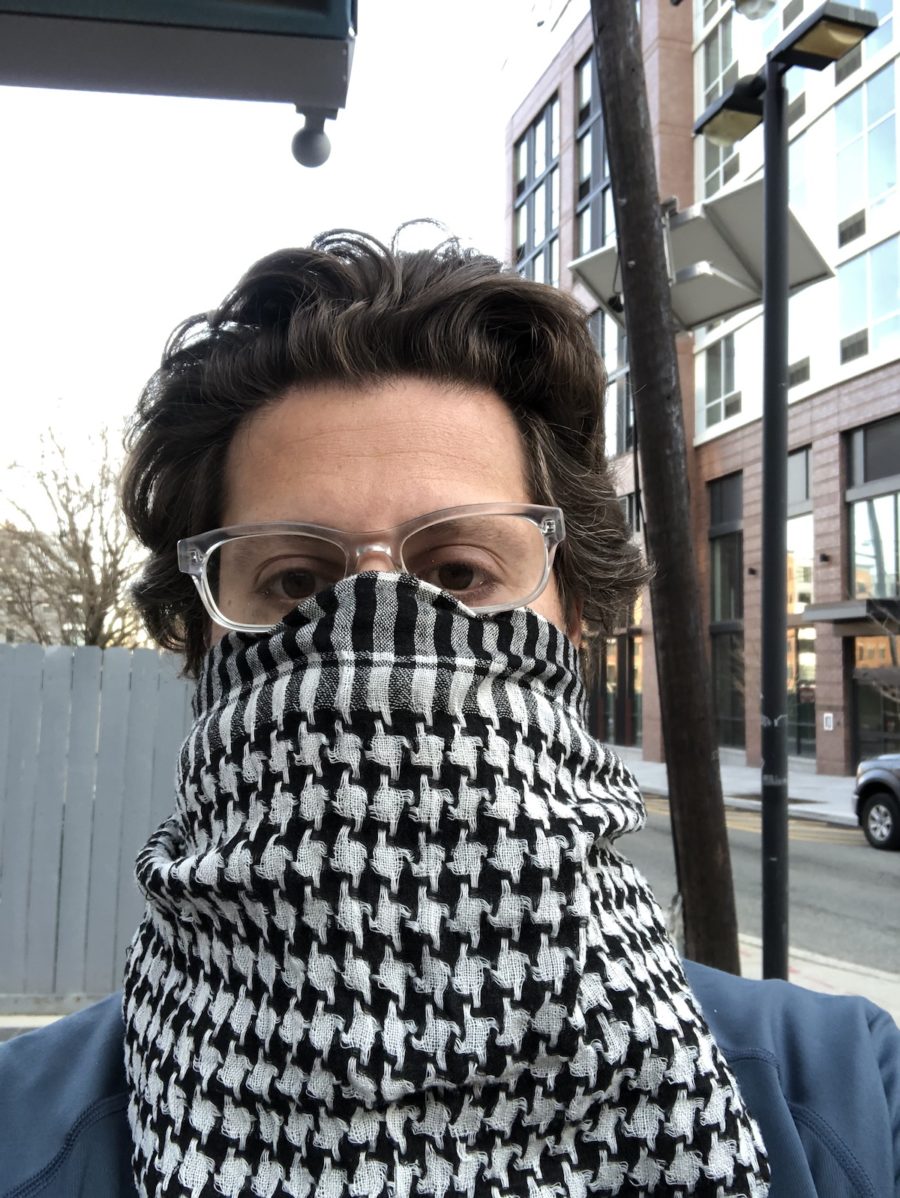 The new face of shopping. The author donning a face mask in order to enter any essential business in Hoboken***Jason Stahl***

Hoboken instituted a 50% capacity at all supermarkets and all customers and employees must wear a mask or a face covering inside. I stood in line for only 14 minutes. This was my first time wearing a mask during the pandemic and my glasses fogged up with very breath I took.

New Jersey Transit buses, which had already cordoned off nearly a third of their seating capacity to protect the drivers — and you must now board and exit the bus via the rear door, have less and less people daily. Most buses appear completely vacant. The issue now, with seating being limited, passengers are forced to sit near each other making social distancing nearly impossible on this mode of public transportation.

“Did somebody die in your building yesterday?” a women on West Street in Union City said on her phone, in a carefree tone as if she was asking to borrow a cup of sugar.

Hudson County shut down all of their parks, including Washington Park, where I go. The barricade to one of the entrances was blown off from heavy winds so we didn’t realize it until we saw the other entrances wrapped in caution tape. Throughout this pandemic, construction continued on a new fitness park here. It was completed and immediately cordoned off, but that didn’t stop two men from working out. 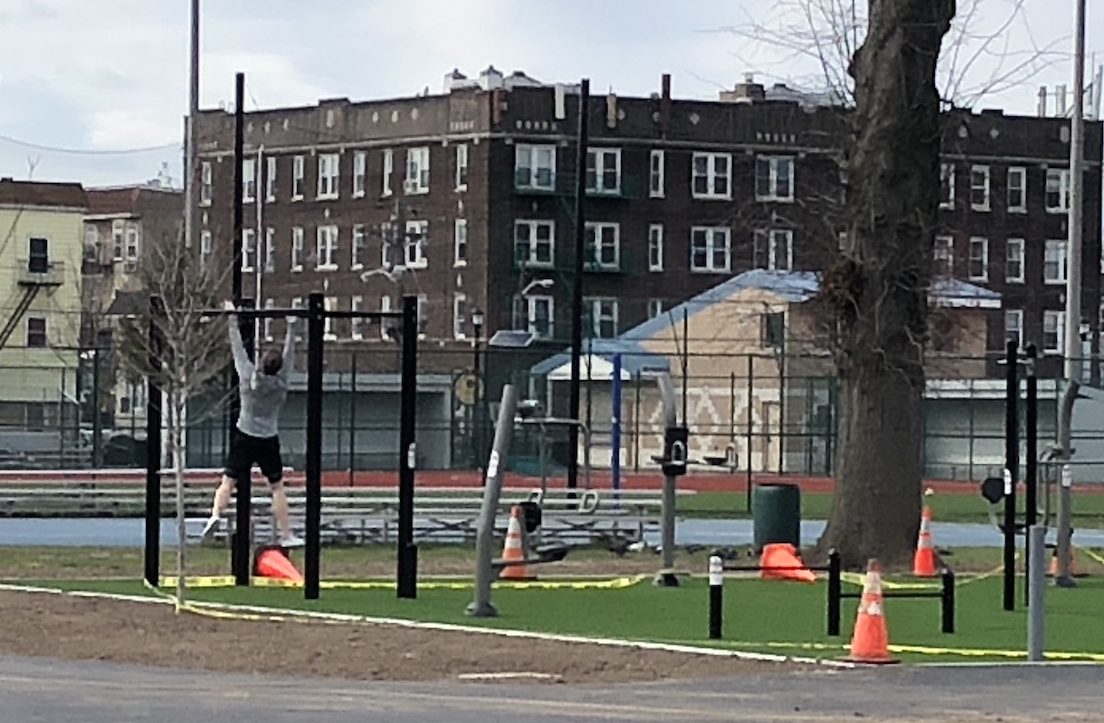 Not even COVID-19 can stop this fella from testing out the new fitness park in Jersey City. At least he’s wearing gloves, right?***Jason Stahl***

Chicken (thighs, drumsticks, wings, breasts) has returned to ShopRite in Hoboken, so no more resorting to buying chicken paws, but salmon is now in high demand. Even with daily deliveries, salmon is sold out by 12.30 p.m.

Walgreens instituted a maximum number of customers. At least they have an overhang to stand under while raining.

Millennials in Jersey City appear to have no clue what’s going on. While the majority is stocking up on toilet paper and canned tuna, they’re buying lamps and rugs.

We bought our son a bicycle. What better time to learn to ride a bike than now, right??? 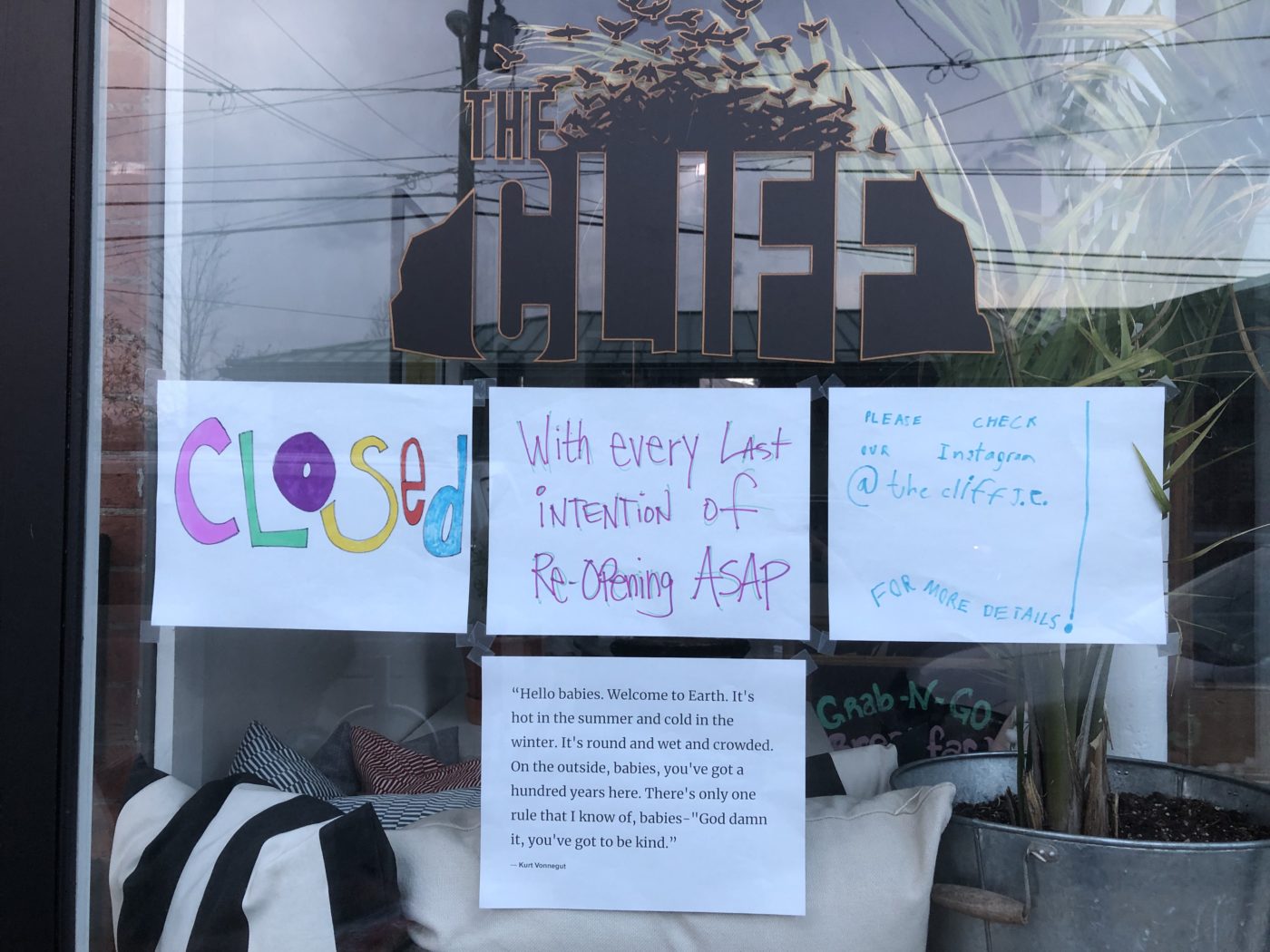 The popular brunch spot The Cliff in Jersey City Heights closed amid the COVID-19 pandemic, but with all intentions of reopening***Jason Stahl*** 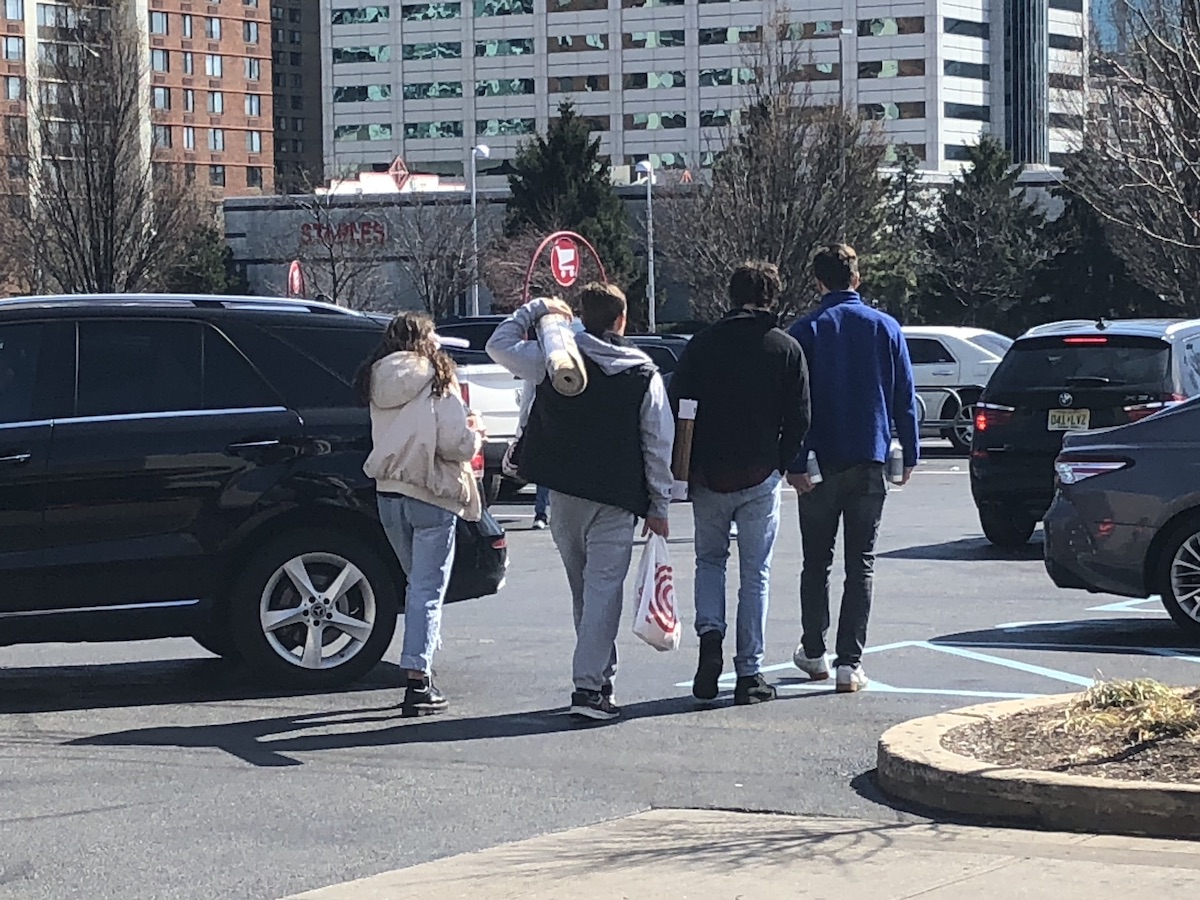 That rug definitely ties the room together. But at what cost?***Jason Stahl***

Washington Park’s fields have been completely cordoned off, leaving only paths open. However, construction is still underway on a fitness park.

The temperatures reached into the high 70s. It seemed all of Hoboken ignored the stay-at-home order and social distancing measures. 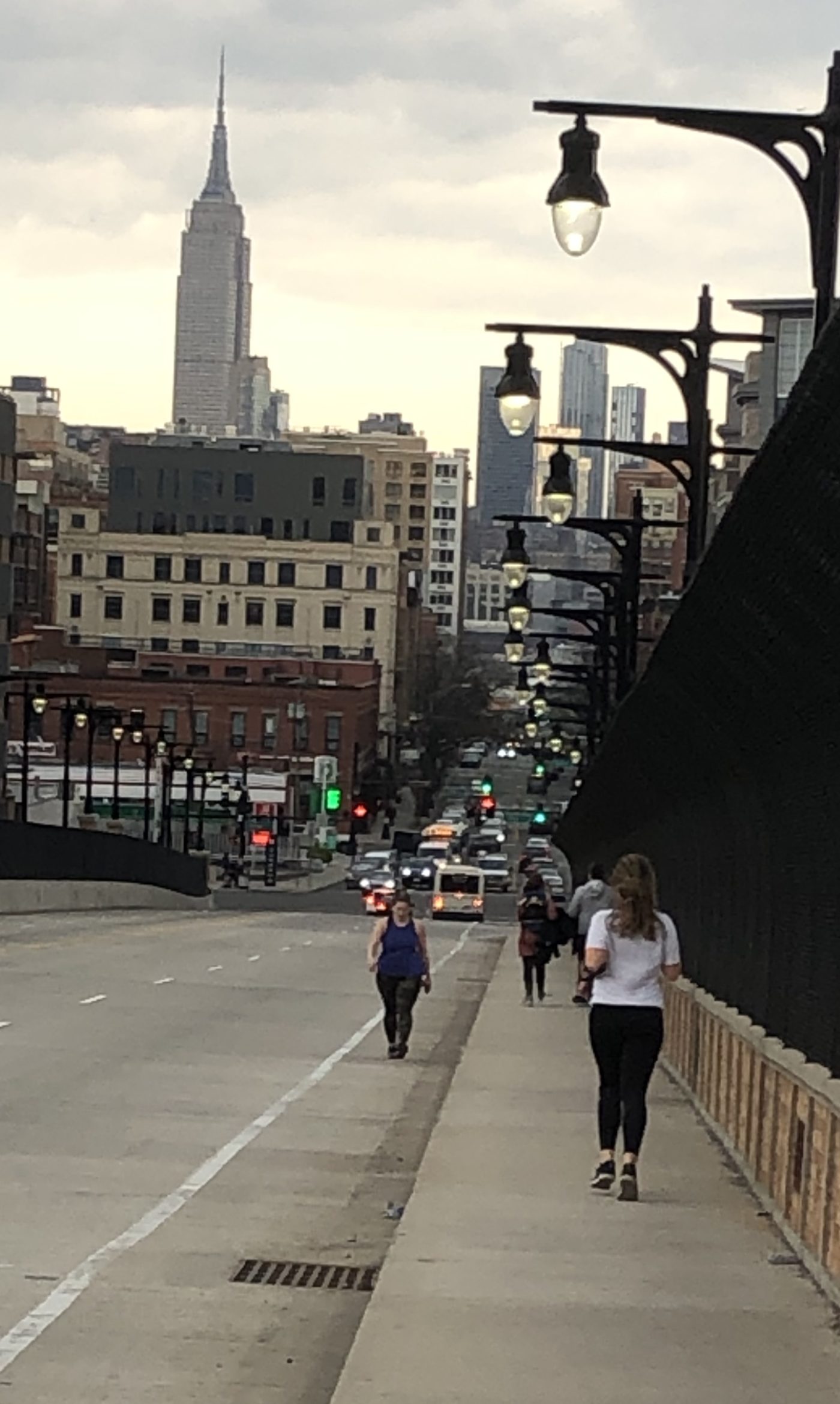 A woman, in her 50s, popped out of her house, wondering, “Are those people out there?” She was filled with joy to have human interaction, her from her porch, us from the sidewalk. She’s not concerned with contracting coronavirus, but with how the isolation will defeat her mentally. A sentiment shared by many people, particularly parents with small children.

Distance learning has been quite the experience. Our son is having a hard time adjusting to his new routine. Instead of doing his quasi-assigned schoolwork this afternoon, we spent two hours building an evil laboratory out of Lego. That brightened his mood.

The highlight of our walk was eating the best damn croissant from Choc-O-Pain bakery on Palisade Avenue.

Washington Park, the county park on the Jersey City Heights / Union City border, has been our twice daily oasis. The fields are still open, which we use to have a football or baseball catch, but the parks department went several steps further to enforce social distancing. They locked up the tennis courts and to halt any basketball playing, they took off all of the rims.

My neighborhood is an absolute ghost town.

My son’s – and all of Hoboken’s – schools closed beginning Monday, March 16; his for an indefinite amount of time. The director of my son’s school has dealt with pandemics in other schools in other countries – SARS in South Korea and bird flu in Shanghai – so he knows how to implement “distance learning” as they’re calling it. 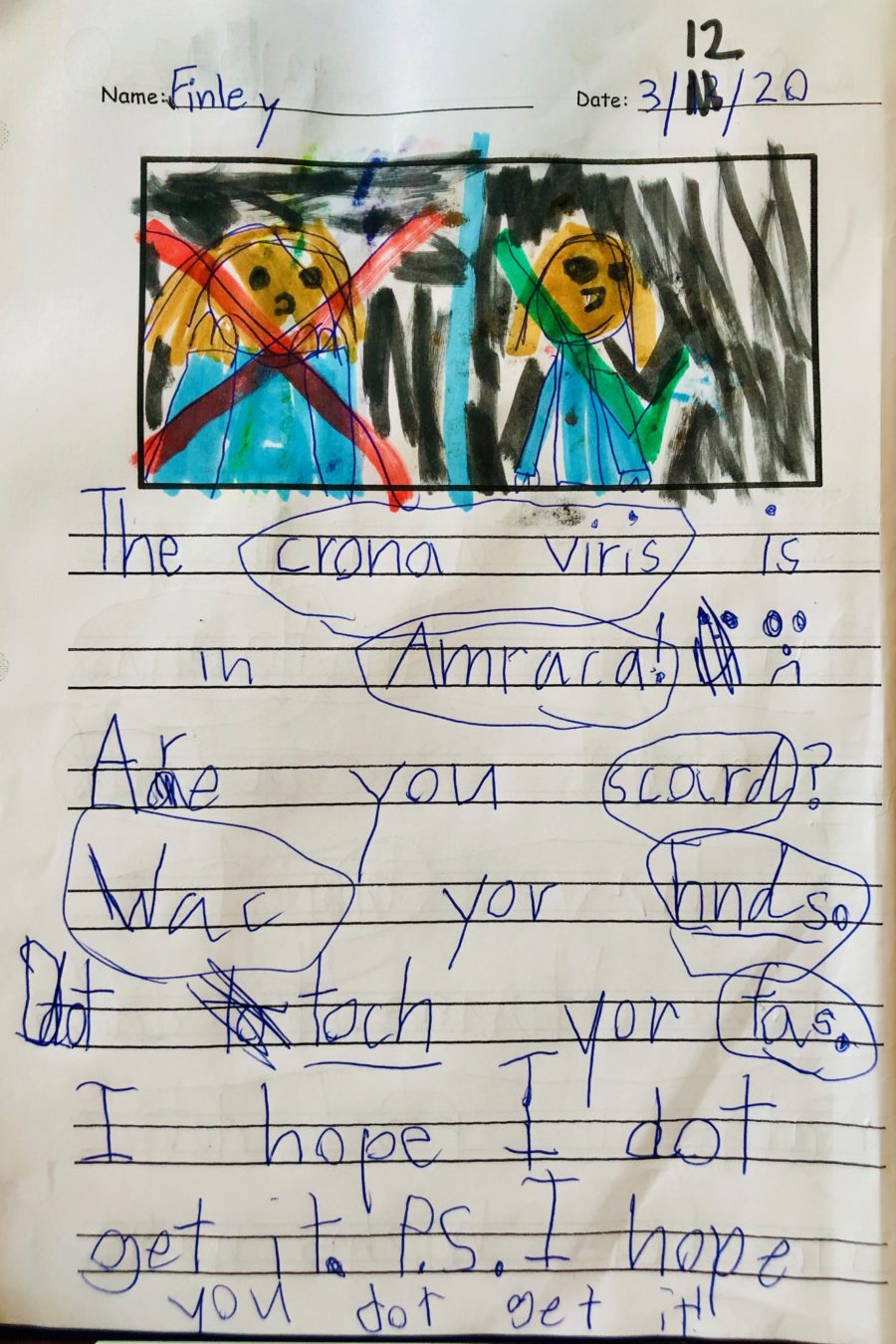 My wife has been fearing this outbreak for several weeks and, as a restaurant employee, was bracing for her establishment to close (NYC Mayor Bill de Blasio just ordered all restaurants to close except for takeout and delivery), putting us in a financial bind. She’s trying to file an unemployment claim but the Department of Labor website is crashing.

Despite no more long lines at family-owned brunch hotspot The Cliff (they’re open for takeout and delivery — try the kimchi grilled cheese!), our neighbors in Jersey City Heights — part of the most diverse city in the country — seem to be moving on with their daily routines, for now. The county park along the Jersey City / Union City border was packed on Sunday. Very few are wearing masks on the streets, on the bus. But this will probably all change as we’re preparing for pending lockdown. The playground was locked on Monday and nary a soul was there except for us.

“It’s sad” proclaimed my son, Master Leviticus Stahl, 8, upon getting to a Hoboken park and seeing all the playgrounds and basketball courts cordoned off.

When I went to my local supermarket just to pick up ice cream (we already did our “doomsday bunker” shopping), panic set in for me. I bought more eggs, milk, a rack of ribs, olive oil, cans of tuna, Oreo cookies, and the ice cream of course. I noticed signs limiting the number of hand sanitizer and wipes and fever medicine each customer can purchase. What remained on the shelves was sparse. I’m not fearing contracting COVID-19 – my feelings about all this is, I don’t care. I’m not being flippant or trivial. I’m simply just going with whatever needs to be done. But my wife has a compromised respiratory system and we have no medical insurance. There are so many mixed messages from the media and zero meaningful direction and leadership on the federal level, we truly don’t know how to proceed if one of us did get sick. 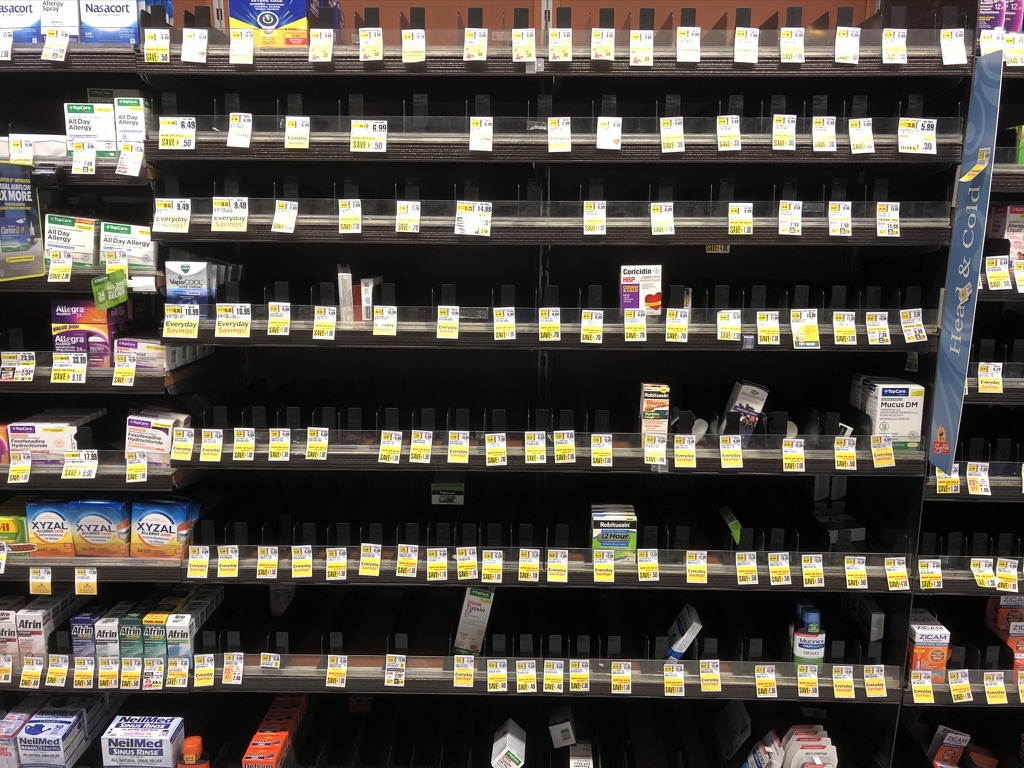 Did you find everything you were looking for?***Jason Stahl***

Hoboken’s Mayor Ravi Bhalla has handled this situation with aplomb, being in constant contact with his constituents. Mayor Fulop recently went around with the Jersey City Police Department to issue $10,000 fines to businesses who were price gouging, posting a video on Twitter of one business jacking up the price of rubbing alcohol from $2.99 to $6.99.

“I went to the bodega near my work [in New York City] and they were selling travel size Purell for $5.99. When I asked them if they were serious, they said Purell is selling it to them for $4.99,” my wife Theresa told me.

Krista R. Gormeley, founder and COO of Shaka Bowl, which has two restaurants in Hoboken, said: “I fear my businesses needing to close down. Being able to still operate is always a plus in a time like this. However, if we need to be closed all together, that is when us, small businesses, will begin to truly panic. Unfortunately, what is going to happen over the hype and precautions, though both hype and fear are warranted, is it will keep people to their houses.”

Hoboken is now on lockdown! 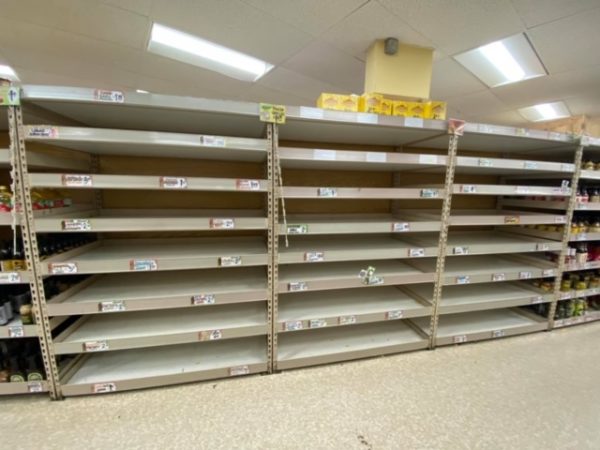