Some birds, I am told, sing like Englebert Humperdinck.

Jason Tan, ornithophile, bodyguard, and a one-time Singaporean national karate champion and deliverer of this particular declaration, searches his phone for videos of songbirds to compare them with those of a crooning Humperdinck. Englebert Humperdinck is mentioned many times, by many people on this day. I wonder what Englebert is doing at this very moment.) 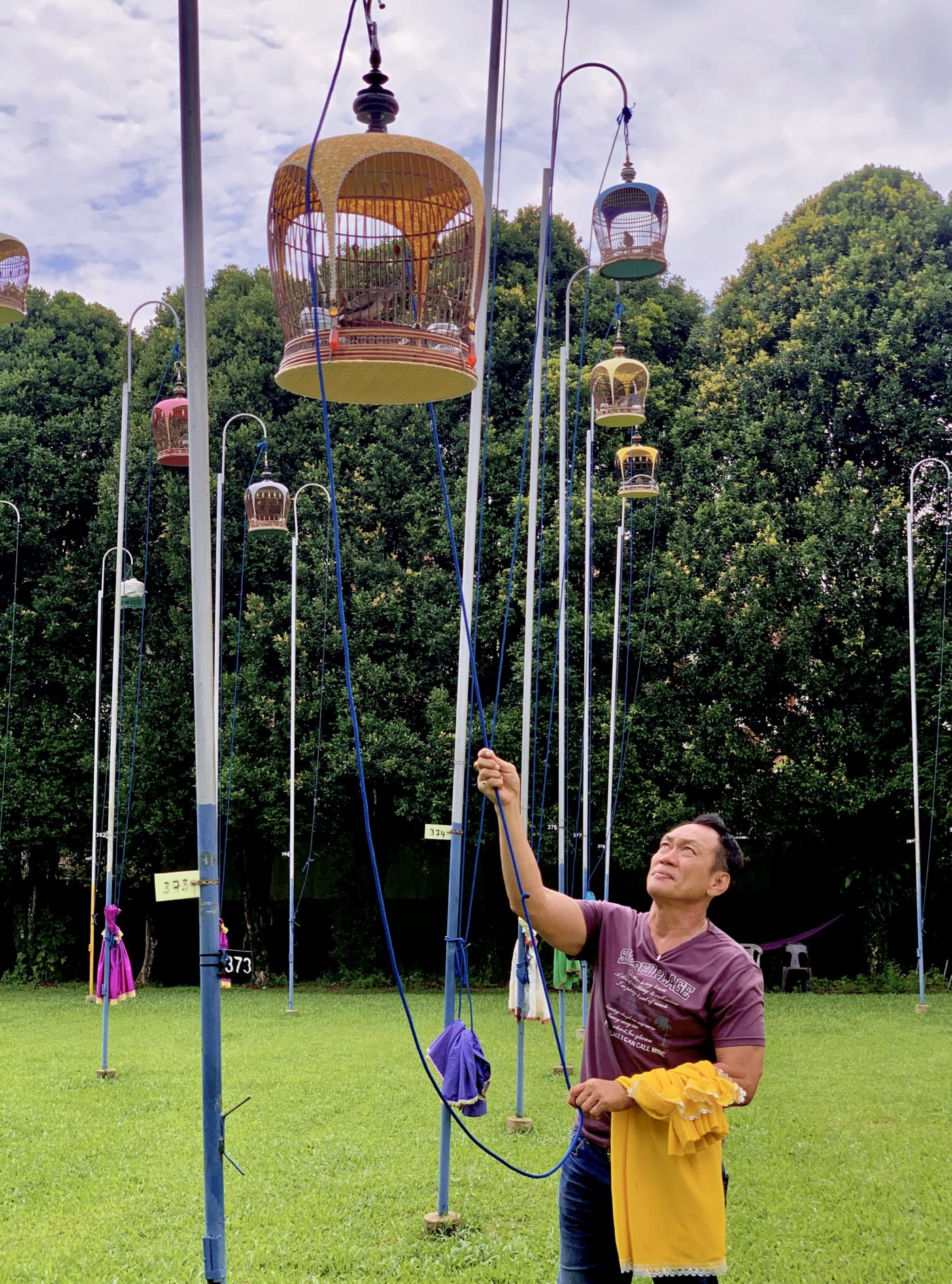 Englebertian (Humperdinickian?) birds are considered “B Category” and have a mid-range pitch with “soothing” vocals.

Jason is the proud owner of a dozen songbirds –- some in Singapore and others in Thailand.  He takes part in each country’s bird-singing contests. He introduces me to his prize-winning zebra dove, Anak Nagar, which means “child of a dragon” in Malay. The dragon’s child is perched in a cage 10 feet in the air, hanging from a flag pole. Beside it are dozens of fowls, their silhouettes dark against the blue sky.

Aside from basking in the sun and having their feathers ruffled in the breeze, the creatures are also there to “train” their voices. They sing better in the presence of other birds. 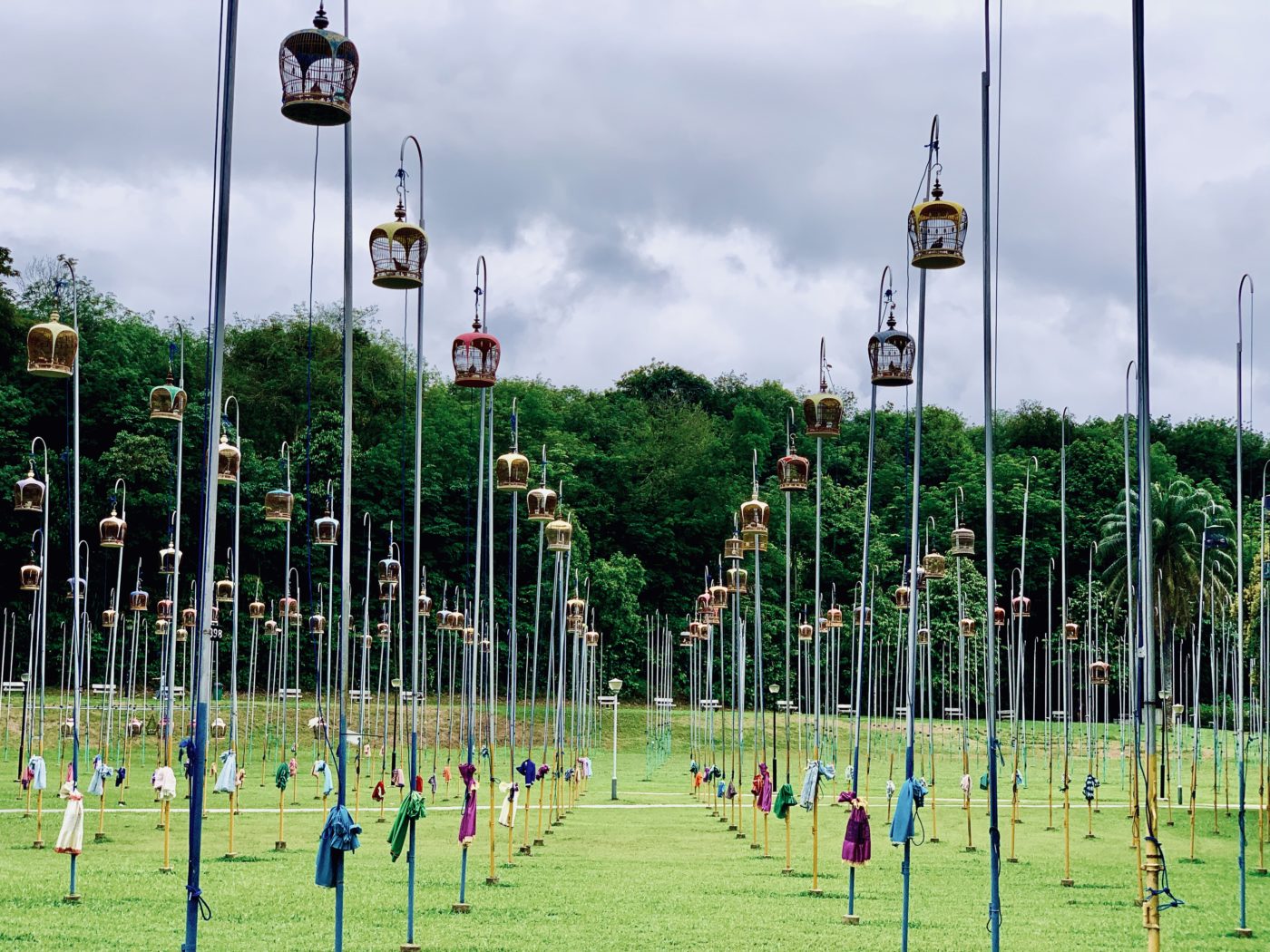 Kebun Baru Bird Singing Club, the only one in Singapore, is a voice-training camp for the winged. Nestled in the neighborhood of Ang Mo Kio, it is a stone’s throw from the bustling city center and a far cry from the conspicuous consumerism that has become metonymic of Singapore. The Club officially opened in 2008 but bird lovers have been congregating here for many decades.

It began as an informal bird singing corner, when a few bird owners came together, pooled their resources and built makeshift structures to hang their birds from. While there are a few other bird corners in Singapore, usually in and around public housing estates, the Kebun Baru Bird Singing Club is by far the biggest space dedicated to bird singing and the only one recognized by Singapore’s Registrar of Societies thus far.

Most bird keepers I spoke with recalled the 1950s as the heyday for birdkeeping in Singapore, although the practice existed in the region for centuries. Subsequent urban redevelopment has displaced many bird singing corners, which are now, sadly, rare sights in Singapore’s hyper-modern cityscape.

Kebun Baru is about the size of two soccer fields, and it has the most bird species (5 in total, with each allocated a set area, since you asked), and a membership of over 3,000 humans.

On a recent Sunday morning, co-founder of the club, Robin Chua, a tall, affable man with smiling eyes and a shock of white hair, graciously offers to give me a tour. One could say he takes me under his wing.  As he walks me around the grounds, it doesn’t dawn on me to point out that he has an avian first name. 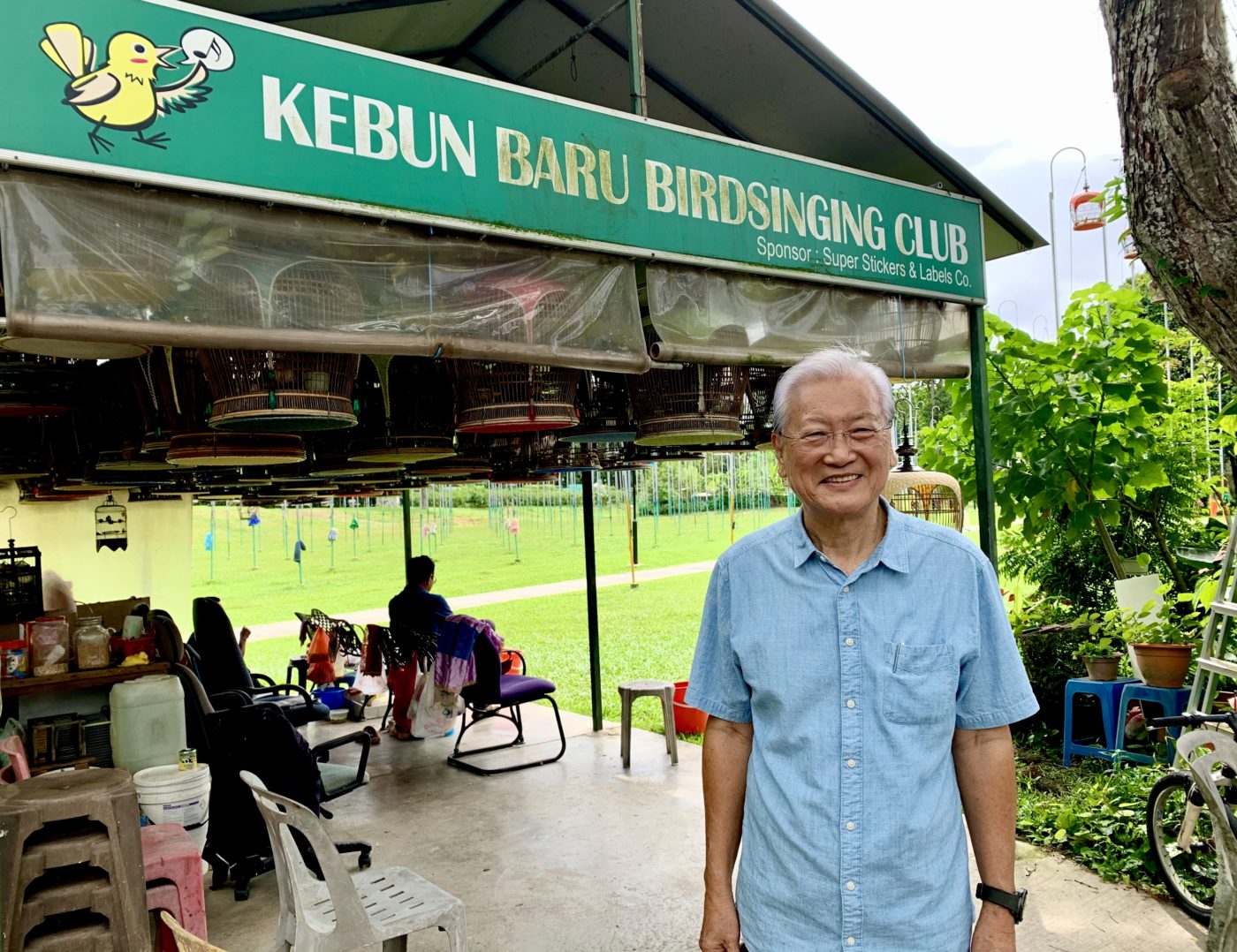 He has been instrumental in overseeing the operations and in bolstering the legitimacy of the club — and the practice of birdkeeping — by emphasizing its heritage and social value. “I am not a bird keeper myself,” he says, before I get the chance to query him about obscure bird trivia, “but I love the club because it brings people together, no matter their race, religion, class; it brings racial and social harmony. People come to make friends. You are a bird owner; I am a bird owner; OK, we just talk.” 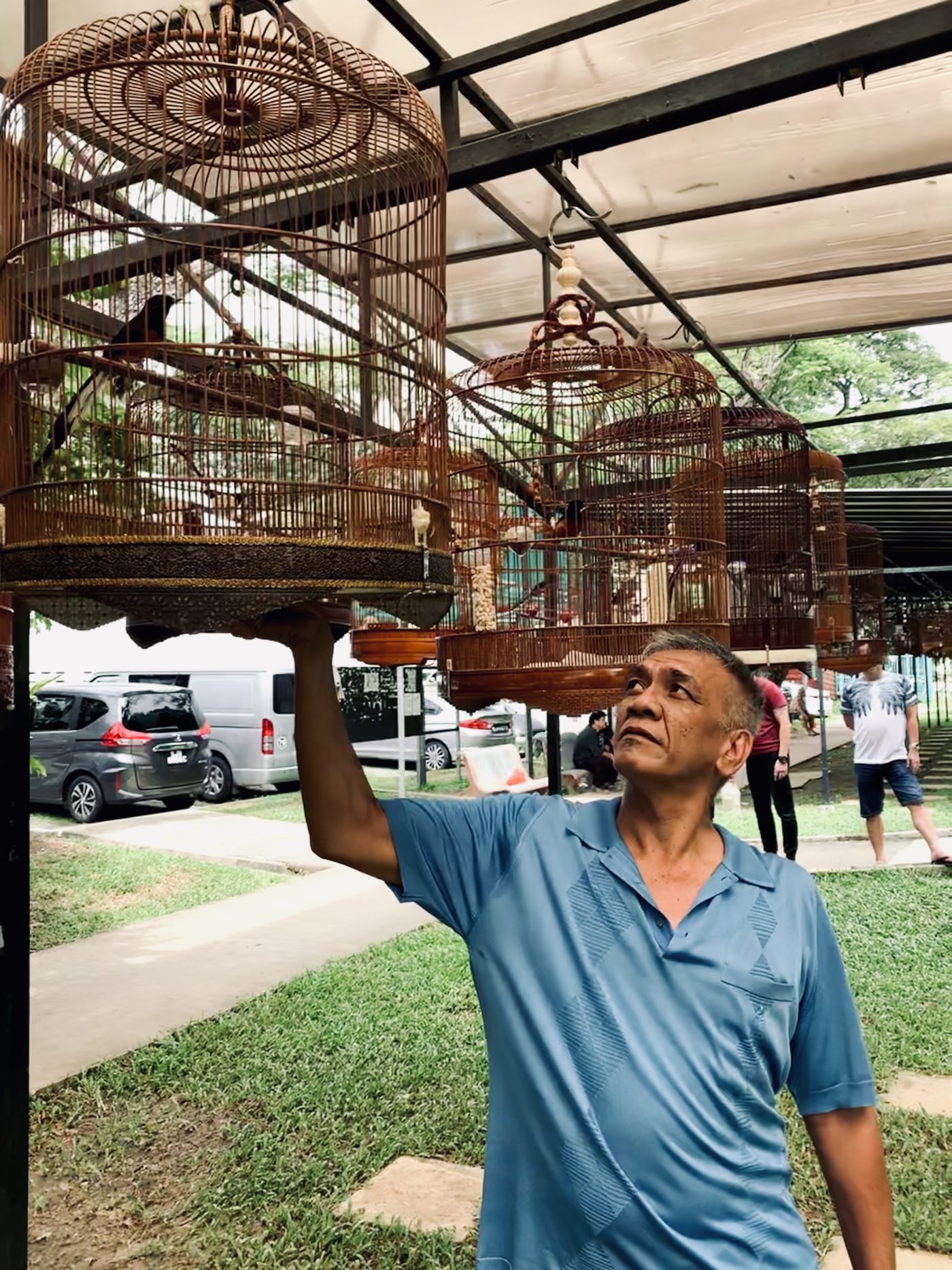 Robin and I walk along the perimeter of the grassy field bristling with flag poles. Bird songs fill the air. Robin greets people who are sitting in the shade, chatting, having a coffee or a smoke. Everyone knows Robin. Robin knows everyone.

As we weave between them, he turns to me and says with a laugh, “I sometimes overhear the conversations; they never talk about women, they only talk about birds!”

Robin introduces me to a host of people, each more passionate about birds than the next. There’s Pak — a term of respect in the Malay language — Ramli Ali, who has fond memories of his grandfather keeping birds at their home in Changi. “I like the birds’ attitudes. Sometimes they wake up not happy, sometimes they’re happy and they sing a lot.”

A man named Melvin lounges on a bench listening to the melodious chorus of Chinese thrushes hanging nearby. He owns 12 birds and has been bringing them to Kebun Baru for the last 20 years.  “I enjoy their singing; it’s peaceful and helps me relax. It makes me happy.”

Robin brings me over to a row of bird-related shops on the housing estate which flanks the club. Both the bird shops and the coffee stalls are on the ground level. There I meet the congenial and bespectacled Mr. Kay who, despite being busy repairing a cage for a customer, agreed to pose for pictures. Two doors down is Teng Leng Foo, a cheery and dapper chap with a broad grin and easy laugh. Despite being way past what most people would assume is retirement age, Mr. Teng is at his workshop without fail, “every day except Chinese New Year.” Hanging from the ceiling just above our heads are dozens of his handmade wooden cages filled with little grey zebra doves peering at us. He bred  zebra doves for a large part of his life, although no longer. 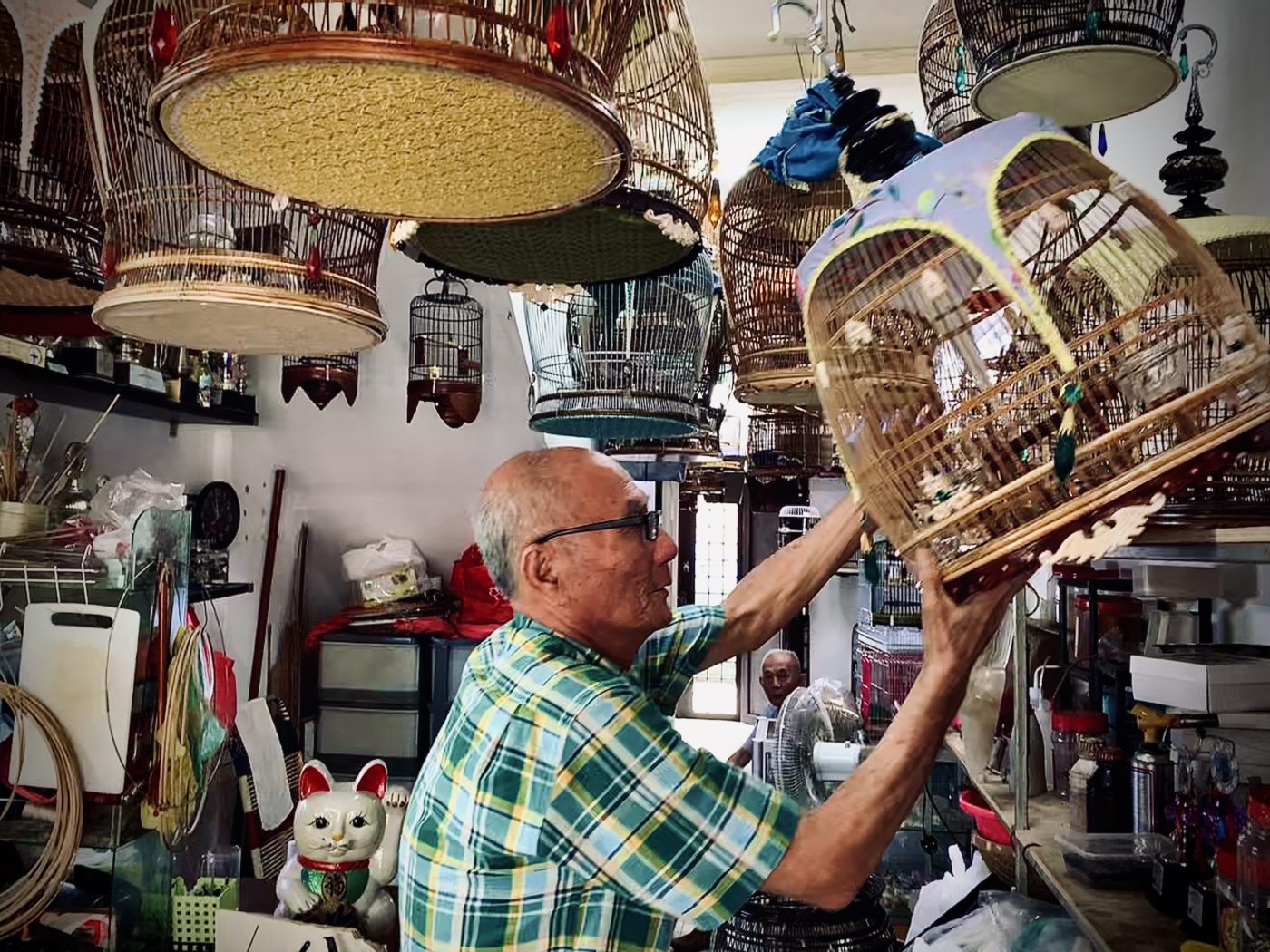 Mr. Teng reaches for a particularly ornate wooden cage, eager to show his design. He has been making cages since he was a little boy and may well be the only person who still handcrafts them in Singapore. I ask him if his children or grandchildren share his interest in birds and in continuing his legacy of birdcage carpentry to which he shakes his head. “No, lah,” — using a colloquial expression of emphasis — “they have no time to take care of birds!” 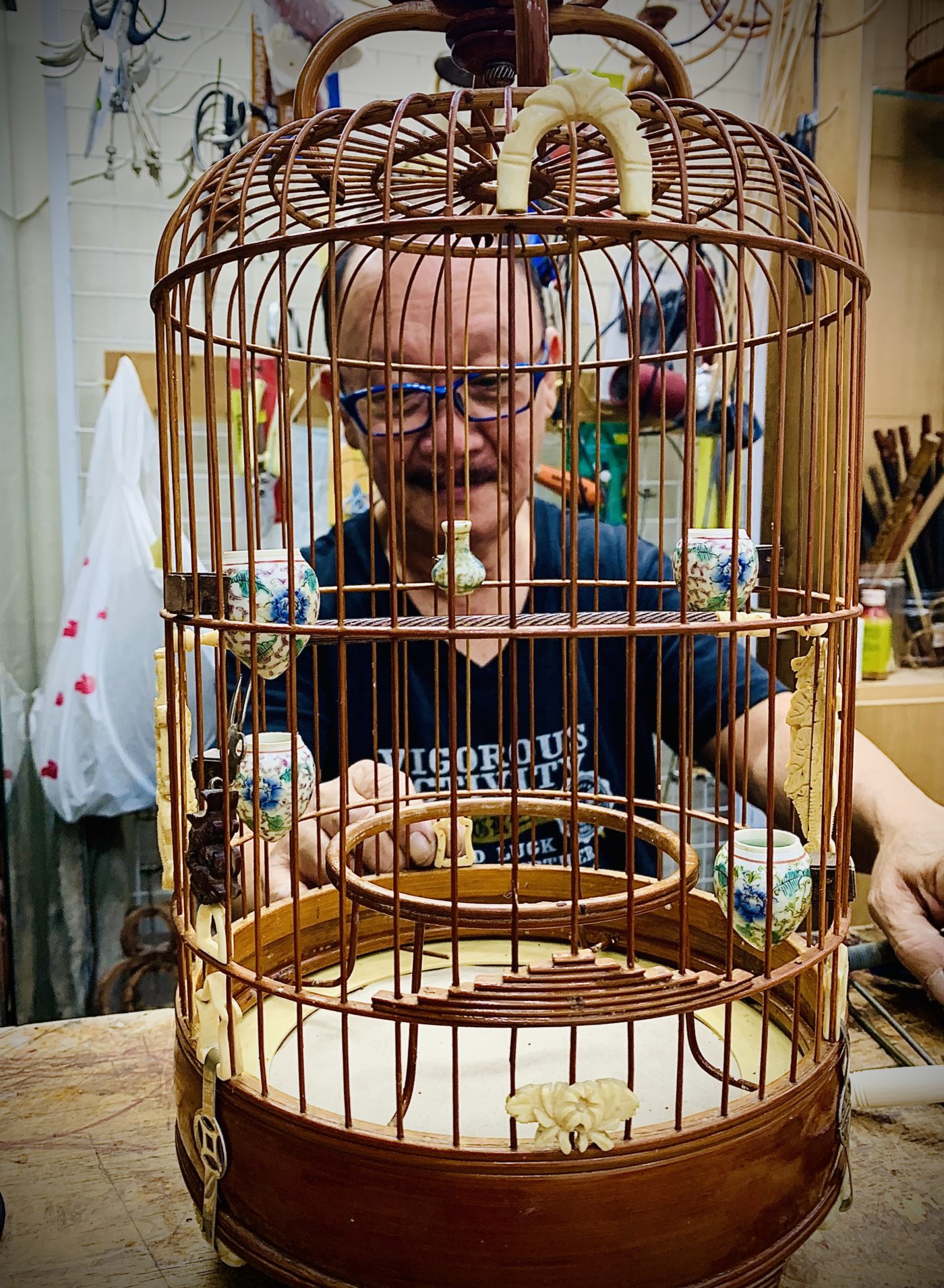 At the beginning of my VIP guided tour, all I heard was a cacophony of chirping. Soon my ears became more finetuned and the babble morphed into multiple mini-symphonies playing side by side, over each other, into each other, weaving in, weaving out.

The subtleties of each individual bird’s renditions emerged – the vibrato of a “coooooooooooooooo” here and there, the wobble of a red whiskered bulbul’s B flat, the tantalizingly long closing note of a merbok. Yes, you begin to be able to distinguish between the birds.

Engrossed in musical conversation, the loquacious birds reveal their personalities and moods. Perhaps taking artistic license, they seem to sometimes embellish melodies and deftly tweak their songs to compose new and original verses.

Interwoven melodies form a delicate sound tapestry, a crafted serenade with ever-evolving refrains that will never exist in that combination ever again.

People listen to existence, here.  They listen to infinity. 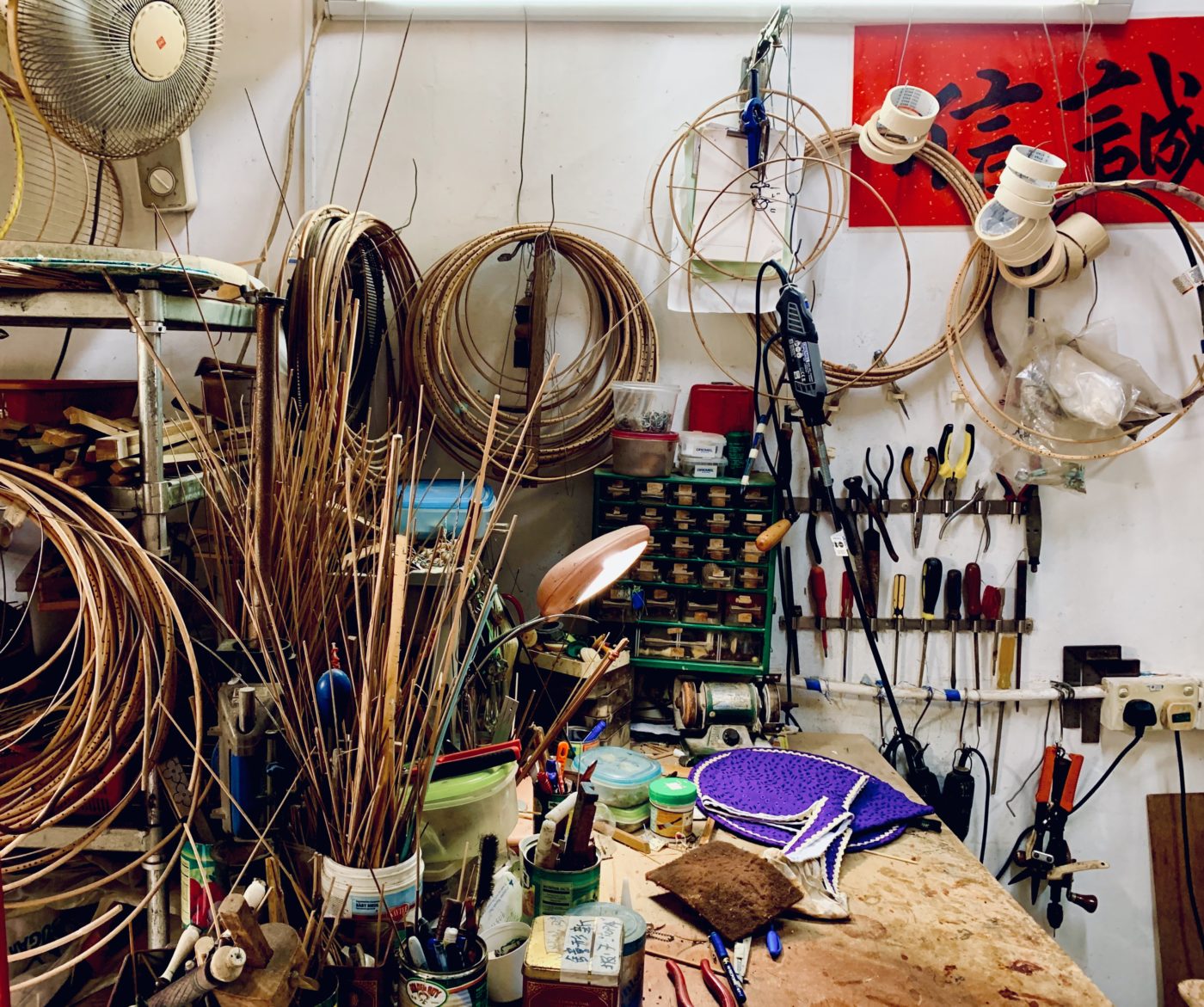 Best time to visit  Weekend mornings at 10 am, and during the monthly or bi-monthly bird-singing competitions.

Food and drink  There are a few hawker stalls right beside the club and the massive Kebun Baru Food Centre (Blk 226), which is a five minute walk away, has plenty of excellent food options. Many stalls there only open for breakfast and lunch so go early.

It has world-class skiing, delicious food, spectacular fall foliage and great hiking, and is considered the world’s most pariah nation 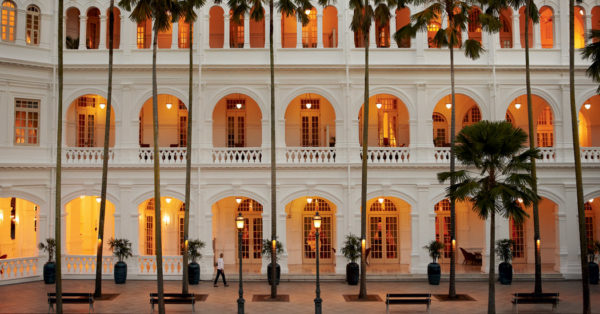 It's baaaaccck... Raffles! But they screwed with the Singapore Sling