Lviv, I was pleasantly surprised to find, is not what one expects. Conversations about Ukraine tend to orbit around words like “bleak”, images of blank brutalist buildings against grey skies, and enormous concrete monuments. I confess, I too was hoodwinked into thinking a whole country could be just those three things. 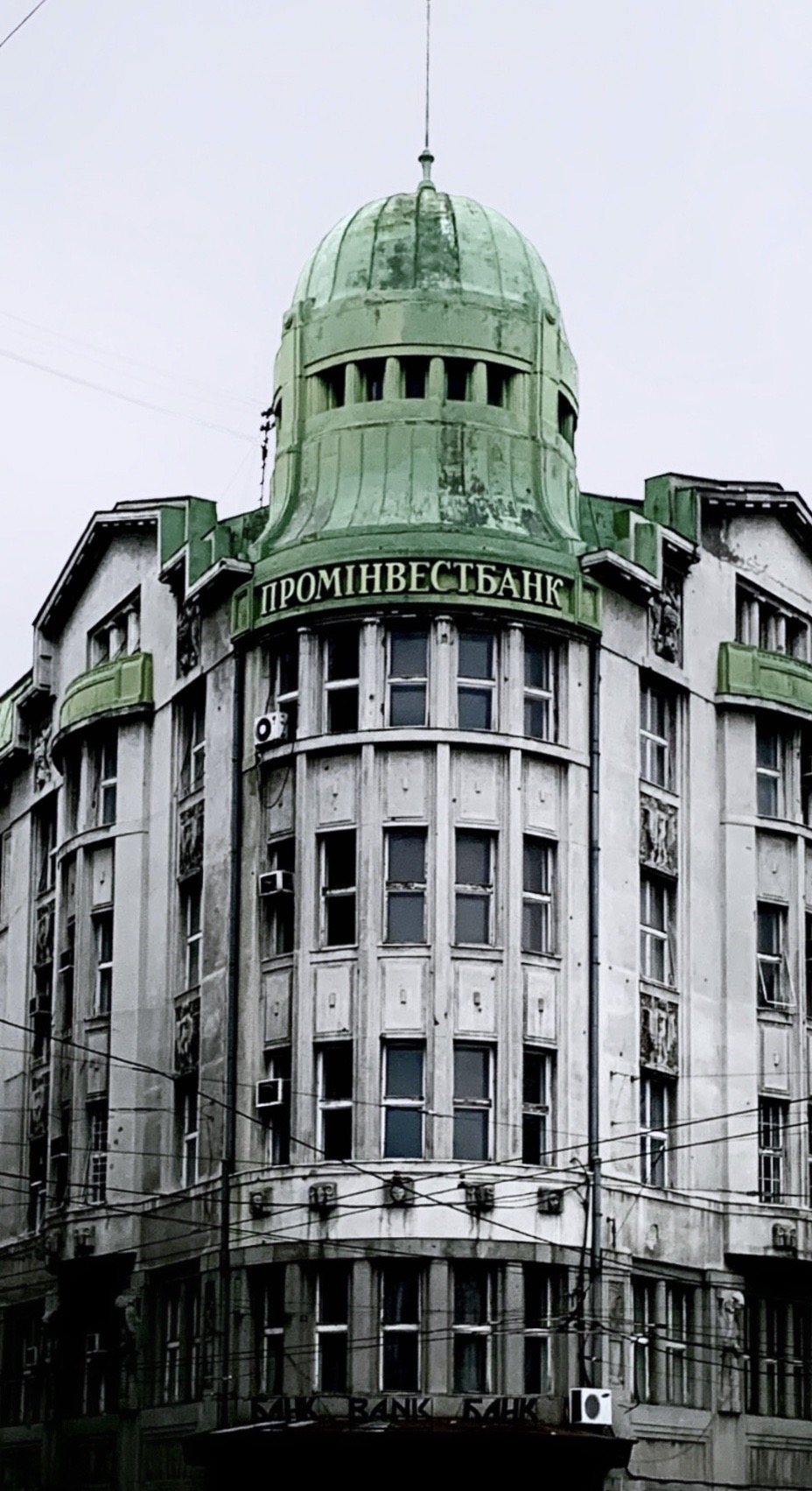 Lviv, the largest city in western Ukraine, struck me as almost…well, ‘whimsical’ is really the best word to describe it. Soaring above the streets were enormous domed towers, hidden ornate archways led to tiny courtyards which showcased murals, that towered above me on the tall apartment building walls. Late at night buskers played guitar in the town square, their melodies overlapping harmoniously. Streets were lined with little candy shops, tiny espresso bars, and the occasional overwhelmingly enormous cathedral. It’s no surprise that Lviv is a Unesco-listed city, and that most of its buildings are protected as historical landmarks.

During my three days in Lviv, I somehow found myself in upwards of seven different theme-restaurants — just one more unpredictable thread in the tapestry of surprises Lviv holds. Like many people I know, this is six hundred percent more theme restaurants than I’ve ever been to.

Each time I entered one of these restaurants, I found myself thinking This cannot possibly be real. But, of course, it was very real. And so, I present to you, dear reader, five restaurants that you’d have to believe cannot possibly exist — and one that actually doesn’t.

Can you tell the difference? 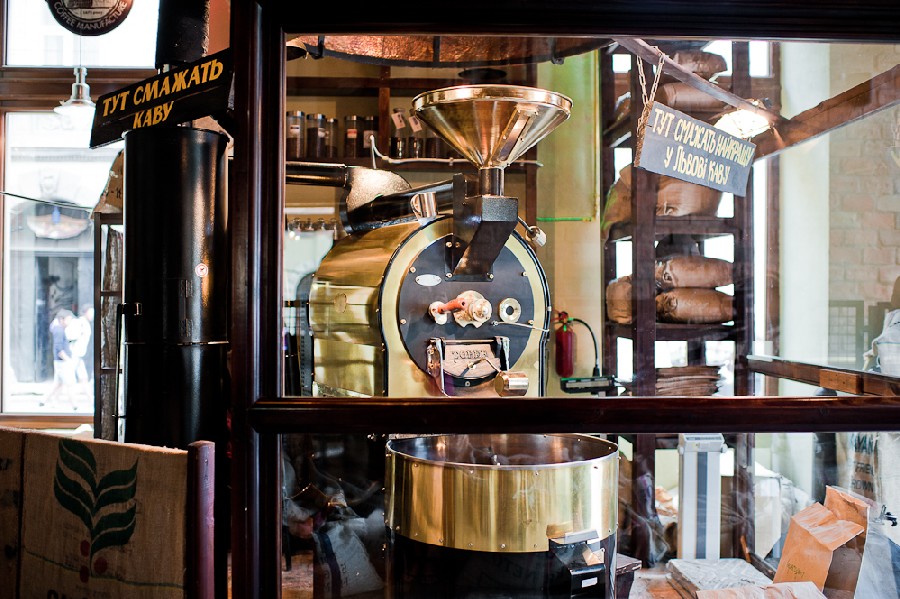 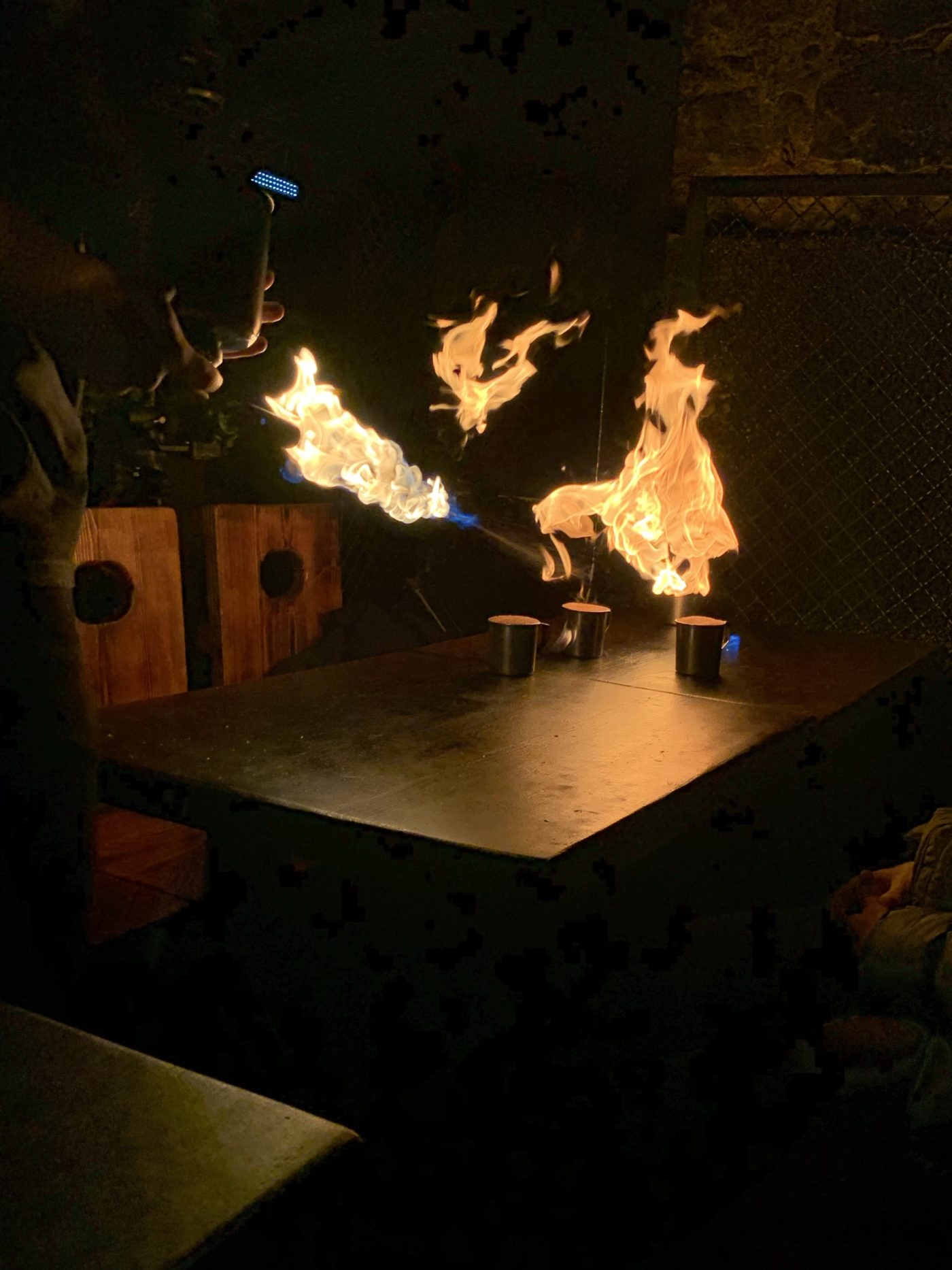 What coffee in Hell must look like, and what it looks like at Lviv Coffee Mining Manufacture

The Lviv Coffee Mining Manufacture is based on a Ukranian lore that quite frankly I cannot remember — what I do remember, however, is being asked to wear a hard hat, being led down steep, dark stairs, and being told I was getting “the special coffee”. “The special coffee” it turned out, was a cappuccino topped with sugar and bruléed with a large flame thrower on the table in front of us.

In the low-ceilinged darkness, and through spurts of flames I saw the small tables occupied mostly by couples, heads close together, tucking into their pastries and coffee. Not somewhere I’d expect for a date, but I suppose that’s part of the draw.

Was I worried about singing my eyebrows? Yes. Was the coffee good… yes.

The Most Expensive Galician Restaurant

At The Most Expensive Galician Restaurant I was immediately presented with questions. Exactly how expensive is this Galician restaurant, and why? Why is the bathroom decorated with piles of American dollars behind plexiglass? What is Galician food, again? 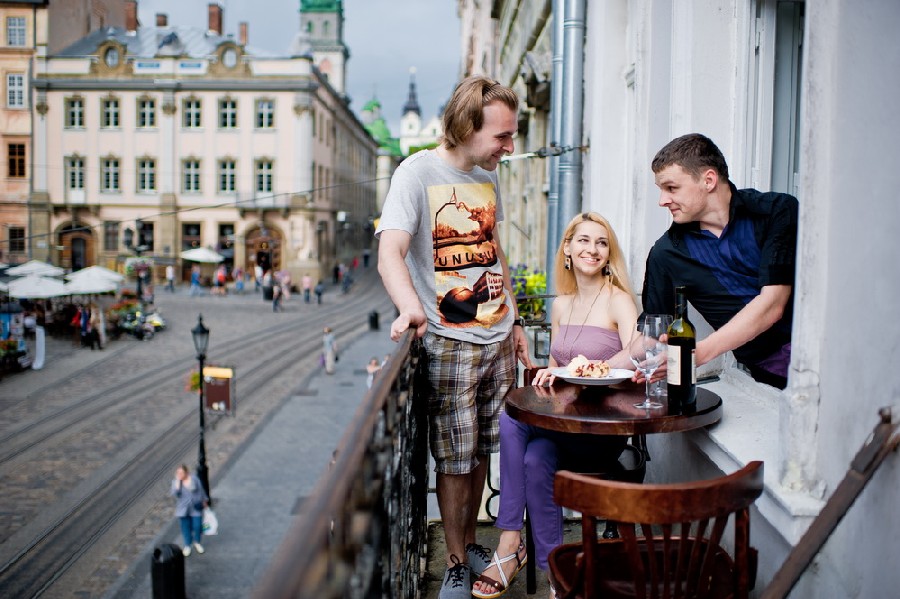 Dining al fresco at The Most Expensive Galician Restaurant! Patrons being being served through the window

This restaurant is entered through the apartment of an old man who will ask you to recite him some poetry — Longfellow, Keats, whatever you can remember off the top of your head, he’s not picky.

When you stare at him blankly while your brain sparks and short circuits, he’ll take pity on you and show you to a door that leads to the restaurant. Diners are granted a special discount from the printed menu prices, which, at full price, would indeed amount to the most expensive Galician restaurant. In the world? This author was too dumbstruck to do the research, but we’ll take their word for it.

The First Lviv Grill Restaurant of Meat and Justice 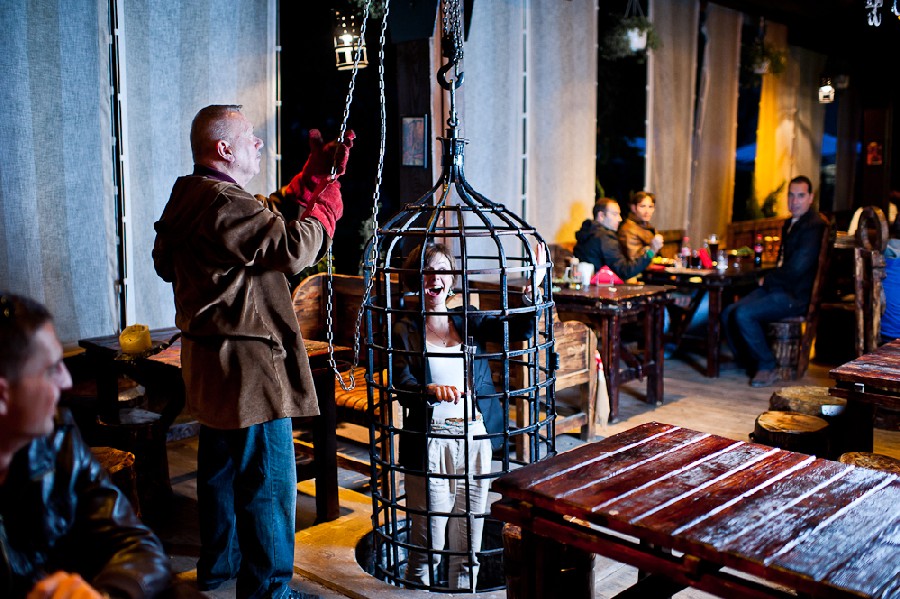 Dinner is served. And so is justice! (Don’t give this place a bad review on Yelp…)

“First” implies the possibility, or actuality, of a second, and that is disconcerting. Because medieval torture is not a theme one expects in a dining experience, or in any experience for that matter, but that’s just what I found one frosty night in Lviv.

Even on a Wednesday night, tables were packed. Diners seemed to enjoy examining the torture equipment that lined the walls, and everyone came with an apetite judging by the pounds of ribeyes and piles of sausage that were making their way to tables.

Before you can even ask – yes! There was an executioner that stops by tables! Yes! He does lock you in a cage! Yes! They do cut enormous rounds of sausage with a slightly miniaturized guillotine! And, no, they wouldn’t actually execute me, no matter how politely I asked. 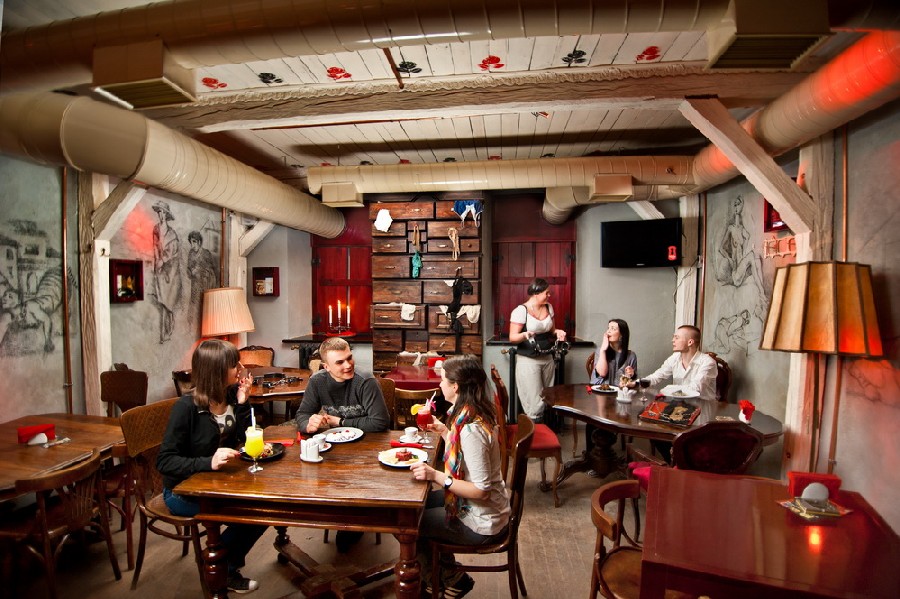 The Masoch Cafe — looks normal, right? This is where they spank you

Is spanking a theme? Many people would say no, and until I entered Masoch Café I counted myself as one of them. This restaurant is inspired by the well known author of “romance novels” (read: 19th century literotica) named Leopold von Sacher-Masoch, and it is not, I was assured, a strip club.

Everyone who enters gets at least a light spanking. Dignitaries, ambassadors, the terminally ill — no one is above getting a gentle tap on the cheeks. Masoch Cafe is popular, even amongst the locals, and it seemed lively inside every time I passed by. Typical pub fare is offered, and the cocktails are strong and good, but it’s the spanking that really keep ‘em coming back for more.

Pretty High Kitchen doesn’t adhere to a theme per se, but it’s certainly not a traditional eatery either. I suppose the theme of the restaurant could be called bespoke, because this was certainly the most customized dining experience I’ve ever had.

Upon sitting down and ordering a cocktail, a gruff Ukranian server arrived. “What do you want?” he asked our table abruptly. We looked at each other, collectively floundering at his question as we hadn’t been given a menu. At our confused looks he explained to us that there were no menus. “We have everything. You tell us what you like.” We mentioned flavors, cuisines, and ingredients we loved while our enormous server scribbled on a pad with a furrowed brow.

Pretty High Kitchen goes through this process with every table. No set menu, but we could see a flurry of activity in the open kitchen, and what followed was a parade of borscht, varenyky, Ukranian soups, stews, and vegetables. We’d asked for traditional Ukranian dishes, and they were all delicious — hearty and warm, but what they were precisely, I couldn’t possibly say. 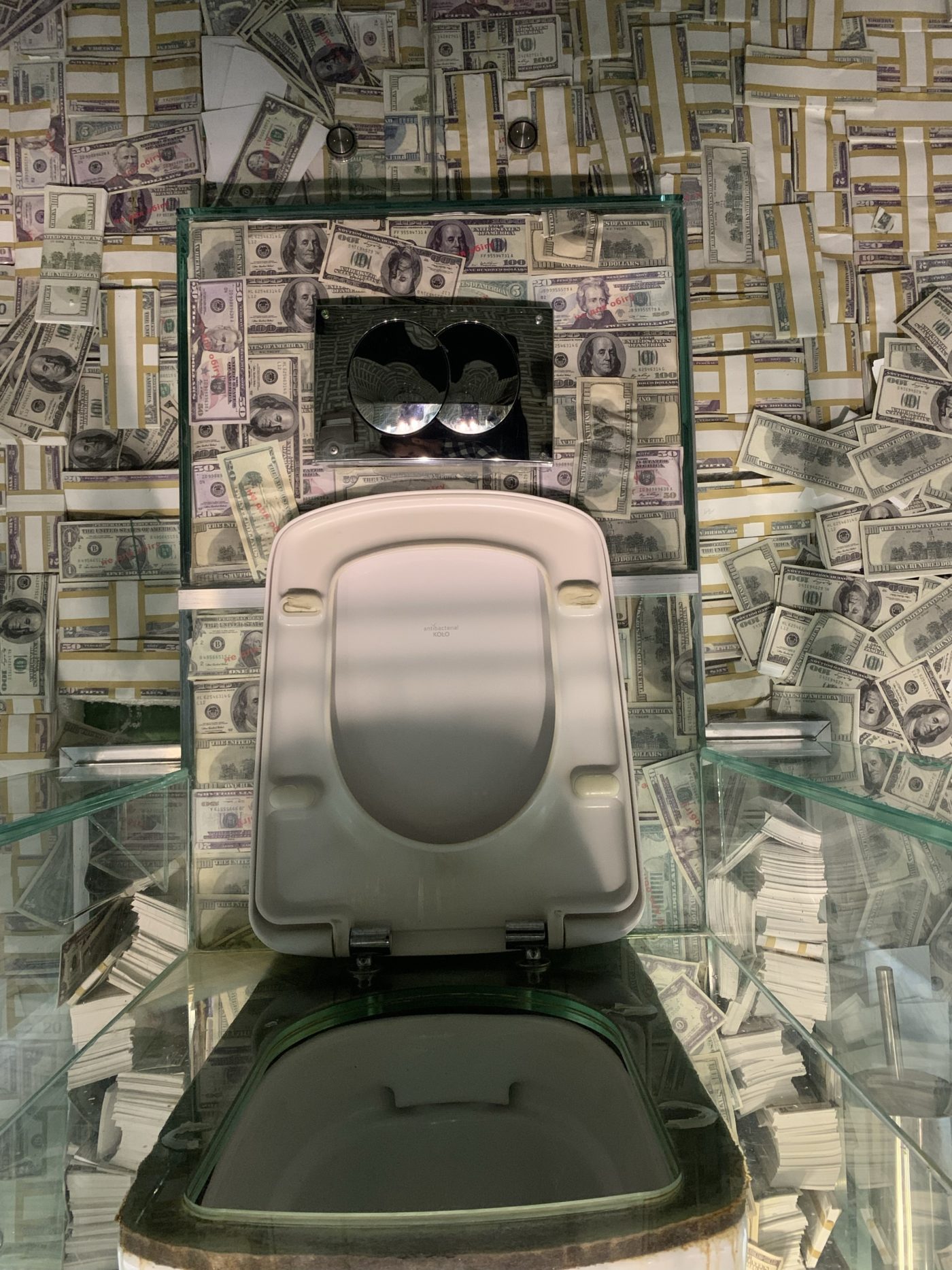 This is where the dollar’s going anyway, at this rate… The toilet at The Most Expensive Galician Restaurant

Just when I thought I couldn’t be shocked they told me we’d be going to Chernobyl Cafe — a restaurant themed after Ukraine’s 1980’s nuclear disaster, the site of which has now become one of their most popular tourist destinations. Control panels on the walls, sirens wailing every few minutes, and — Oh God, I can’t do this. This is the fake restaurant, ok? This doesn’t exist, but can you imagine?