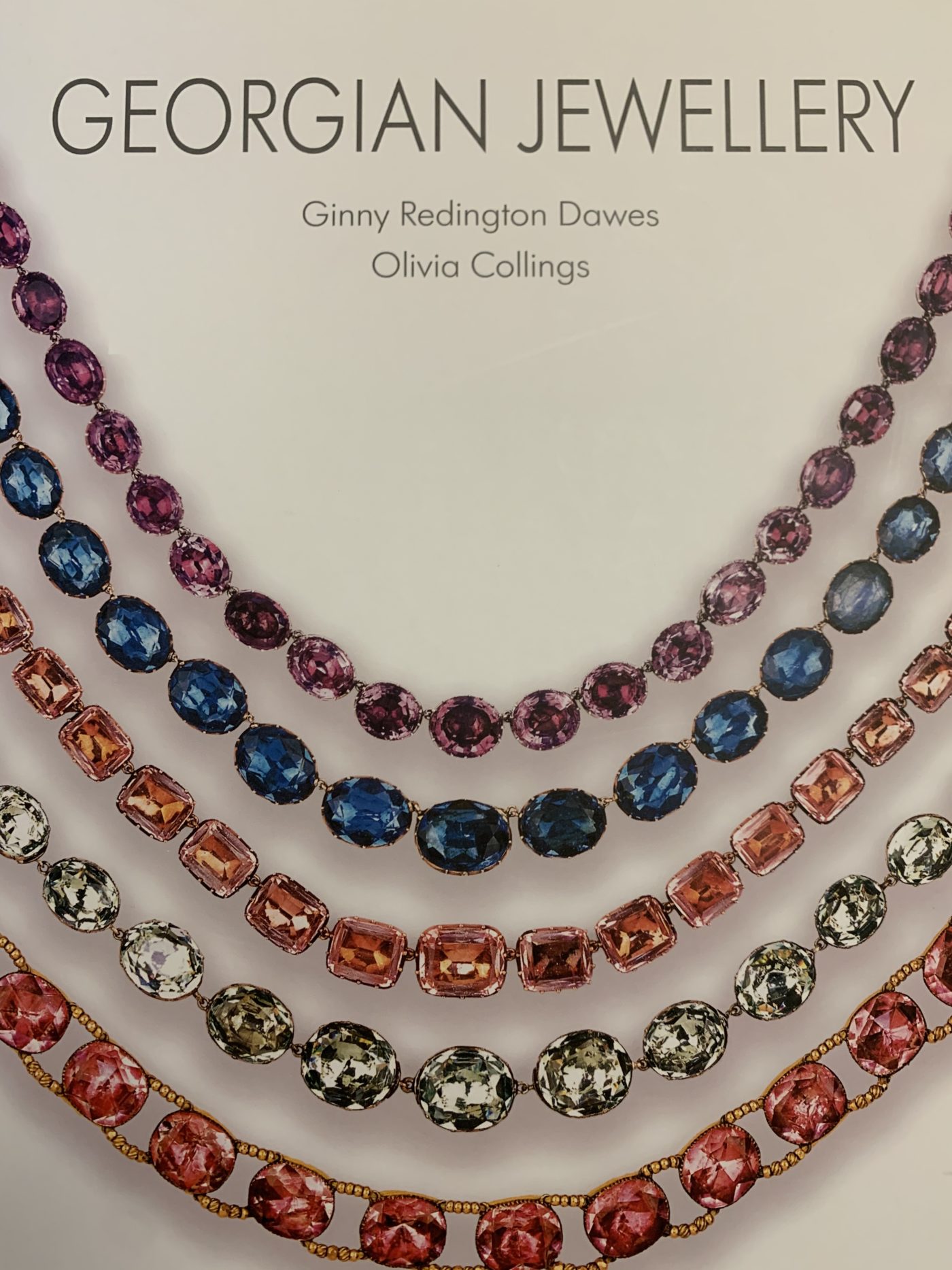 Nobody can wear just one — ask Anna Wintour. The Vogue editor in chief and style setter extraordinaire is known for her signature stacking of antique Georgian riviere necklaces, like the ones pictured on the cover of Georgian Jewellery.

Current devotees of antique jewelry include Muccia Prada, Gucci director Alessandro Michele and Mick Jagger. Increasingly, other collectors like your WL editor, have fallen under the spell of these meticulously hand-crafted pieces. It’s a marvel to hold a mysterious jewel that was perhaps created on the same day that Byron and Keats wrote a Romantic poem.

Georgian Jewellry (using the British spelling) is a compilation of the many various styles of jewelry during the time. The Georgian era spanned the years 1714 – 1830, and included the sub-period of the Regency from 1830 – 1837, when King George III suffered from what scholars now believe was bipolar disorder, and his son took over for him.

Seen in the book are a number of the holy grails of current antique collecting like the riviere necklace and Italian giardinetto rings, the Italian word for garden– delicate floral arrangements often in the form of a vase and flowers. There are examples of glorious parures of bespoke boxes gleaming with matching pieces, sentimental jewelry like miniature paintings of a“lover’s eye,” as well as memorial jewelry with tiny pearls representing tears.

Almost any serious study of the past sheds light on current times and customs, and jewelry is no exception.  For example, we learn that wedding rings are worn on the left hand and fourth finger, as it was believed this positioning connected the vein in that finger directly to the heart. If you’re inspired to buy your own sparkling piece of wearable history, the book comes with a handy index of antique markets and dealers. It’s a good bet, as you can wear your investment every day, and unlike the stock market, prices only go up. 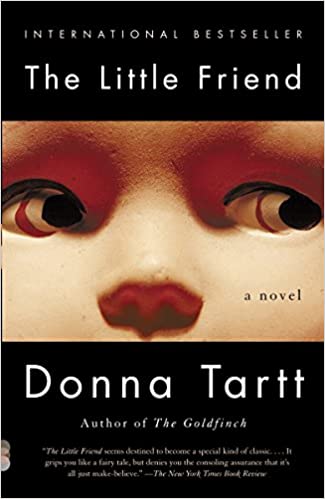 THE LITTLE FRIEND By Donna Tartt

The Little Friend is a big book about a friendless little girl. Donna Tartt’s celebrated second novel is centered on twelve-year-old Harriet, who takes it upon herself to find her brother’s murderer and avenge his death. The subject of murder is reminiscent of Tartt’s highly acclaimed The Secret History, which revolves around a clique of classics students at a liberal arts campus in Vermont.

The novel is a dark tale that doesn’t have an optimistic assessment of human nature. The story is infused with a marvelously laborious and Proustian sense of time past. It hits its stride when the main conflict jells — little Harriet brimming with biblical revenge and pitted against Danny Ratliff, the tough ex-con from the wrong side of the tracks, who comes with a pack of badder brothers in tow. Until then, the pace is slow and languorous, embracing the feel of the deep South, where tupelo trees, kudzu, and all sorts of creepy-crawly foliage encroach onto the present.

It would be a disservice to call The Little Friend a thriller. It’s a highly crafted novel with a slow crescendo and a razzle-dazzle denouement. Pulitzer Prize winning author, Tartt, says “there are no real messages in my fiction.” But little Harriet’s voice resonates throughout the 640 page novel with the sentiment that only by being true to ourselves can we become our own best friend. 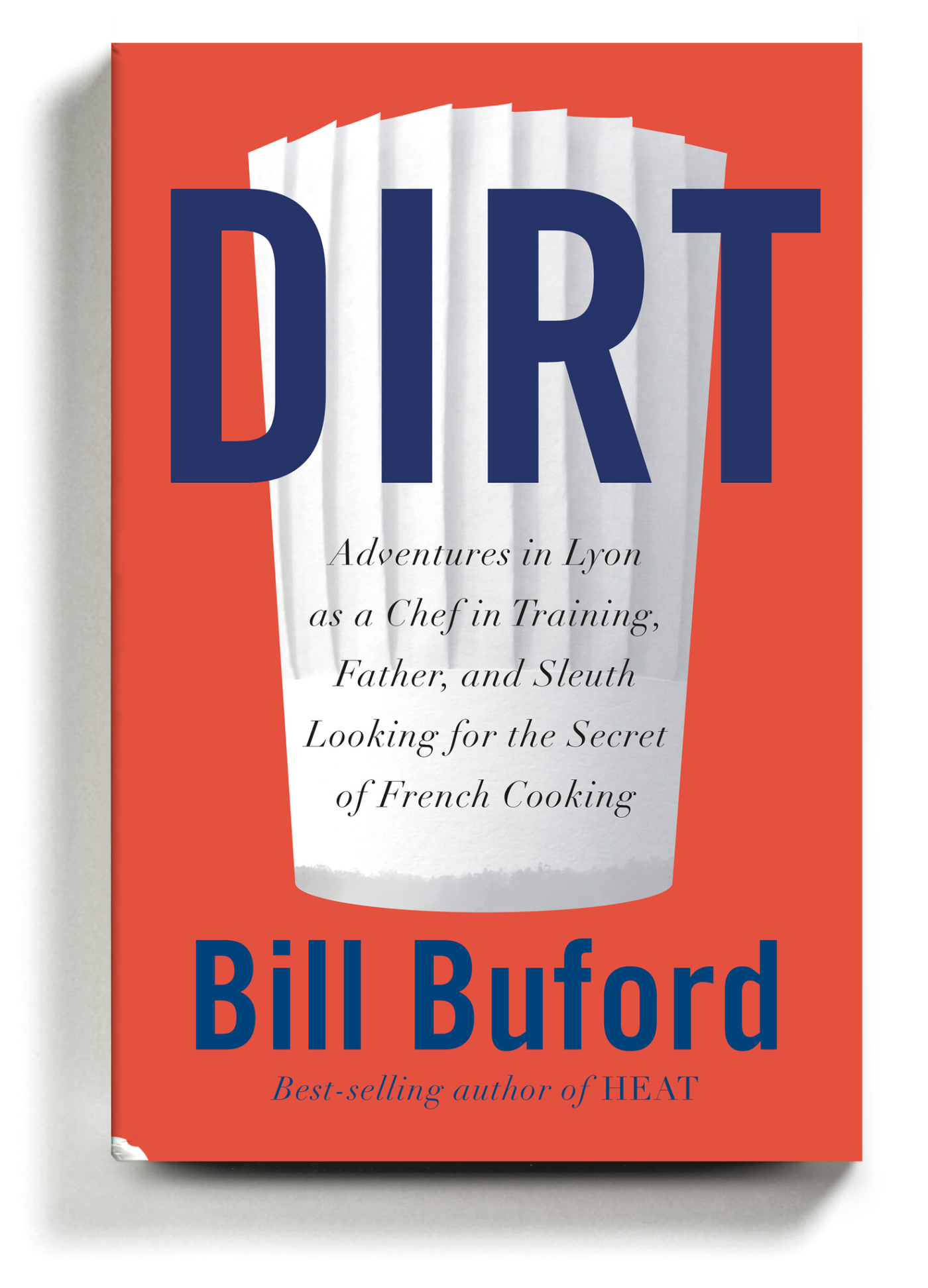 DIRT Adventures in Lyon as a Chef in Training, Father, and Sleuth Looking for the Secret of French Cooking By Bill Buford

Bill Buford is the Keyser Söze of the book world. Nobody knows when he’s going to appear with a new book, and when he does he always kills it – and the release of his books are met with sheer excitement because of the personal adventure he takes you on — before retreating to scheme up his next masterpiece.

Buford’s always been a prolific writer, way before he was the (now former) fiction editor for The New Yorker. However, his list of published books is a short one: Among the Thugs (1990), about soccer hooligans, and Heat (2006), the critically acclaimed book where he learns to cook Italian food by immersing himself in a New York City Italian restaurant kitchen. Then he goes to Tuscany to learn how to cook real Italian food. (We included Heat as one of the greatest travel books of all time!)

With Dirt, Buford returns to answering his high level of culinary curiosity — this time he wants to master French cooking. He escapes to Lyon, France, considered the gastronomic capital of the world, uprooting his wife and their then 3-year-old twins in 2008. Initially planned as just a jaunt for a summer, Buford stayed for five years! During that time he worked at a boulangerie for a simple man named Bob, who baked the best bread. He also worked a rigorous six months at a very important French restaurant, where he was mistreated, or depending on how you look at it, treated the way one expects to be treated in a French kitchen. And he attended a pig killing.

Buford’s writing is as refreshing as a glass of chilled French Champagne. He has an excellent sense of humor, a deep knowledge of, well everything, not just gastronomy, and he’s genuinely excited to thrust himself into unchartered scenarios, and doesn’t mind being laughed at — very not-French! Readers of Dirt will want to live the Buford life. Lyon, get ready for a tourism boom! 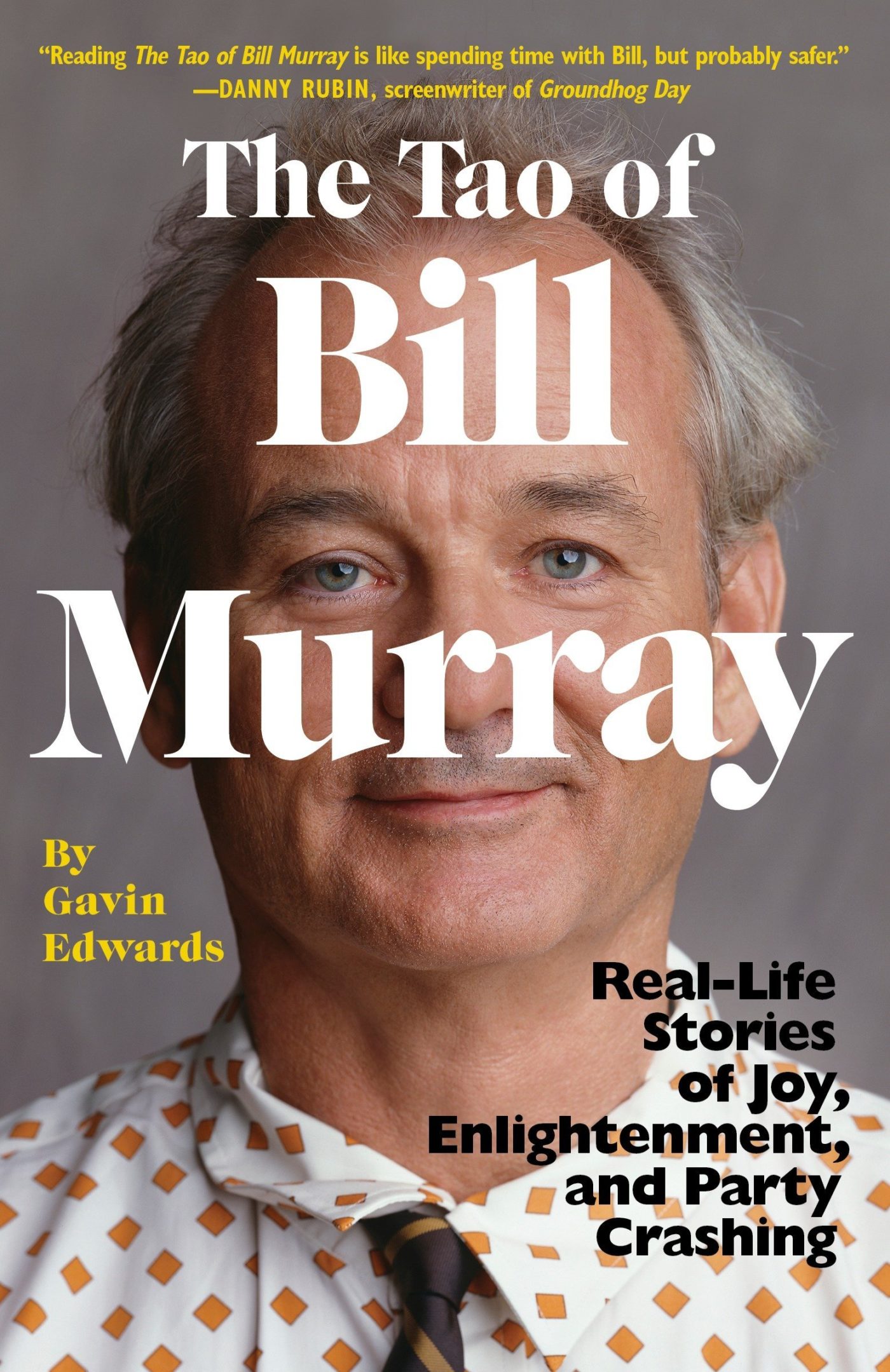 THE TAO OF BILL MURRAY Real-Life Stories of Joy, Enlightenment, and Party Crashing By Gavin Edwards

There’s a lovely story in The Tao of Bill Murray that takes place at Bill Murray Day at the 2014 Toronto Film Festival, where an audience member asks Bill, “What is it like to be you?” The crowd murmured, scoffing at the question, but the more-often-than-not-funnyman replied, saying you should ask yourself the same question.

With Bill Murray, what you see is what you get and he wants you to understand that the secret to a happy life is being simply yourself. Perhaps that’s why he’s had such a profound effect on people. He’s even been compared to Santa Claus: he brings joy to everyone in the world then disappears into the night before you can comprehend what you just experienced. Unlike jolly St. Nick, Bill Murray (who was jolly as Nick the Lounge Singer on Saturday Night Live) is real. 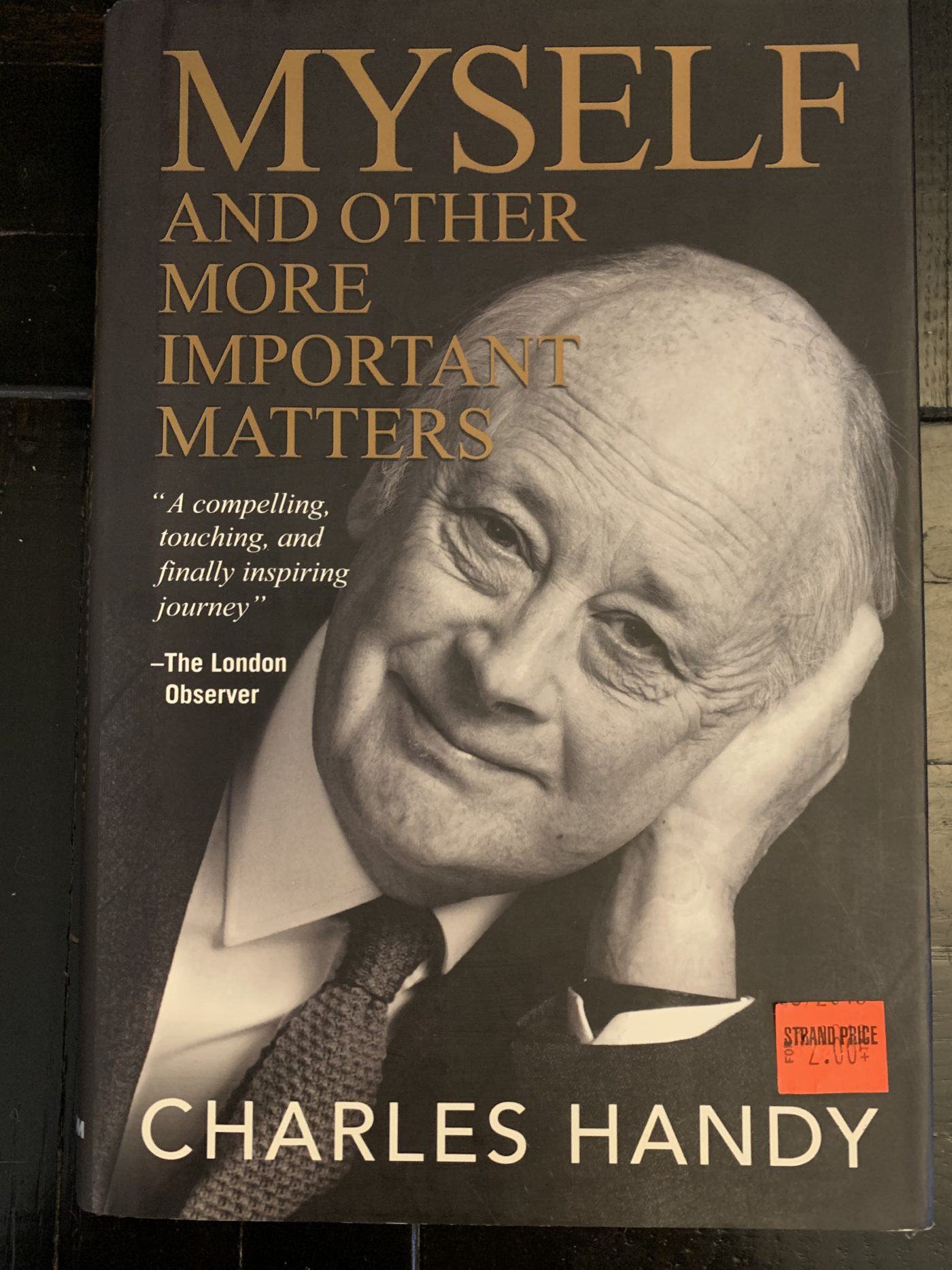 MYSELF AND OTHER MORE IMPORTANT MATTERS By Charles Handy

Equal parts humanity and wisdom, this memoir is by Charles Handy, a social philosopher and innovative thinker who is particularly well known in the business world. Known as one of the great, if not greatest, business management thinkers of our time, he co-founded the London Business School in the days when “business was long seen by the British as a lower status occupation, definitely inferior to the armed services.” Coming from an Irish-Anglo background and trained as a classical scholar in Greek and Roman studies at Oxford, his writing is philosophical, wise, and funny. He is refreshingly candid. Often faulting corporate culture, he believes that management is a matter of experience and common sense, saying “at the end I was more than ever convinced while the skills of business analysis can be taught in class…the art and practice of management cannot.” One doesn’t have to be a business executive to benefit from the memoir. At heart, it is a book about the business of Life.