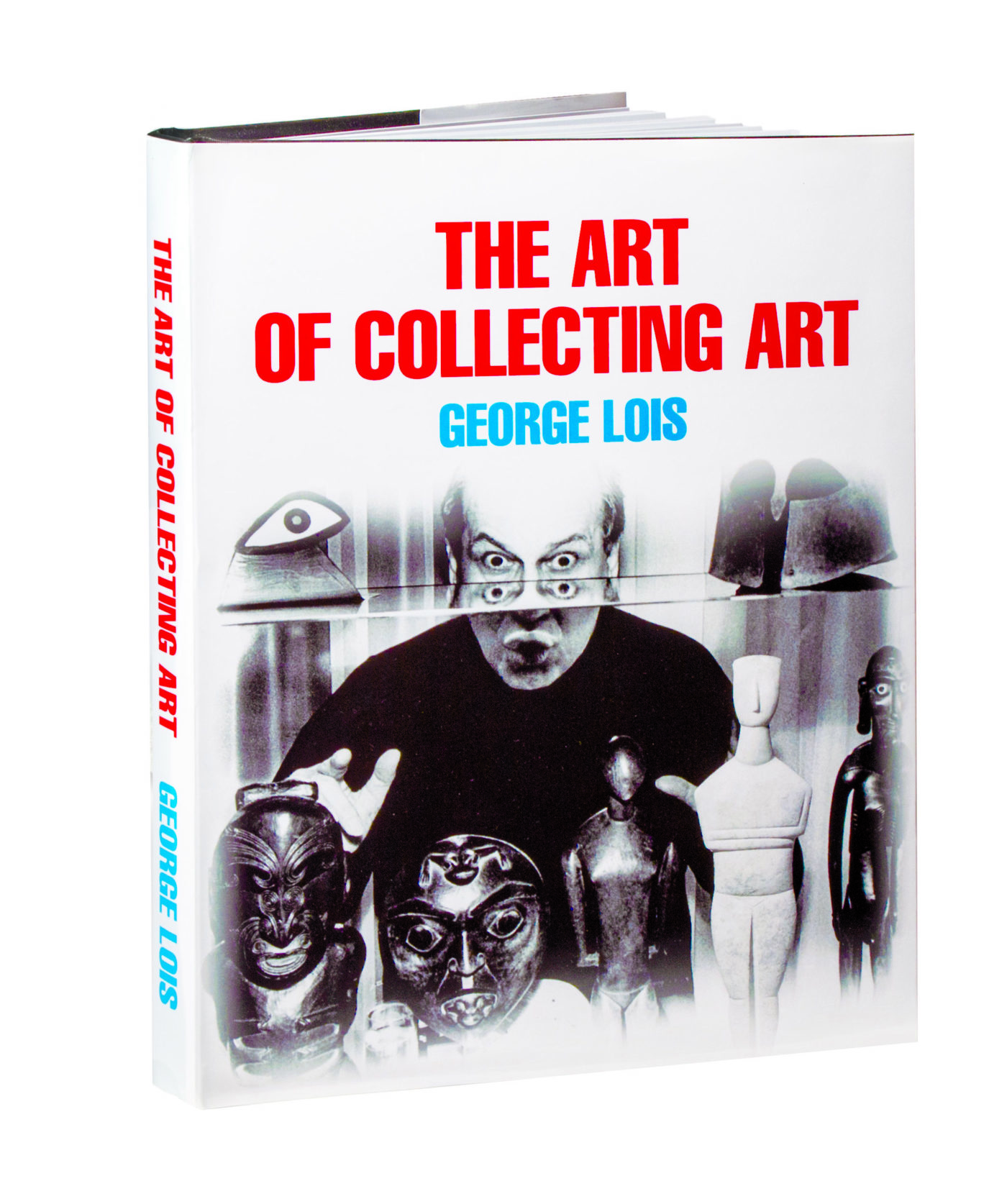 The Art of Collecting Art By George Lois

George Lois is a genius. Really, if “Genius” was a title, like “Sir” or “The Right Honorable”, he’d be one of the rare people walking among us legitimately addressed as such. He is best known as the innovative Art Director who revolutionized magazines with his provocative and now iconic covers for Esquire in the ‘60s. Yes, almost sixty years ago and we’re still talking about them, because eons before there was photoshopping, there was the hand painting art of retouching, and it was art to create images of Andy Warhol being sucked into a can of Campbell’s soup, or Muhammad Ali pierced by arrows like the martyr St Sebastian, or most chillingly, a smiling Lt. Calley standing with Vietnamese children after the My Lai massacre in Vietnam.

But George did more than those immortal covers, 32 — thirty two! —of which are in the permanent collection of the Museum of Modern Art in New York. For decades he ran one of the most successful and influential ad agencies in America, and the first to go public. First and foremost he’s always been an artist, and, it turns out, an avid art collector with one of the world’s greatest collections of Primitive Art. This book is his collection, and it’s a museum between hardcovers. He owns art that predates Moses. Lois is an excellent writer and brings this fascinating collection to vibrant life with his text. This is a beautiful book and you can either look at it as an exorbitant coffee table book, available on Amazon or Blurb, or as a very reasonably priced and exquisite piece of art, which is, I think, the way George intended it. 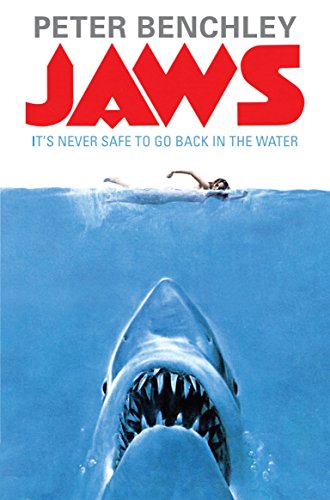 Love ‘em or hate ‘em, we have a fascination with sharks. Mine may have started when I sent a colleague on an assignment to go swimming with sharks in French Polynesia. He survived to tell the tale of how calm they were. Forty-five years ago Steven Spielberg most meaningfully piqued our interest and curiosity – and fear – in the Great White when Jaws hit movie theaters, June 20, 1975. Since then, we’ve been questioning whether it was safe to go back into the water.

Peter Blenchley penned the book Jaws, which the movie is based on. He extensively researched sharks, but in his 1974 novel, which he had over 40 other names for, until practically blurting out the name that didn’t have much meaning at the time, the shark is almost an afterthought.

Taking place in the fictional sleepy summer town of Amity on the east end of Long Island, New York, Blenchley’s Jaws is more about relationships. Going beyond man vs. beast, Blenchley digs into the life of the residents of this small island, exploring the entanglements between the police chief Martin Brody and his wife Ellen who left the posh summer lifestyle she still yearns for; between Brody and the town’s mayor and realtor Larry Vaughn and his “associates”; Brody and a newspaper reporter; Brody and Hooper, the young oceanographer from Woods Hole (the way he’s described in the book, I couldn’t imagine Richard Dreyfuss playing him despite him being 28 when the film came out); Hooper and Ellen (I won’t spoil this steamy one for you); and of course the final act of Brody, Hooper and the salty seaman Quint and the shark.

I couldn’t help but read all of Quint’s lines as Robert Shaw, minus the monologue. 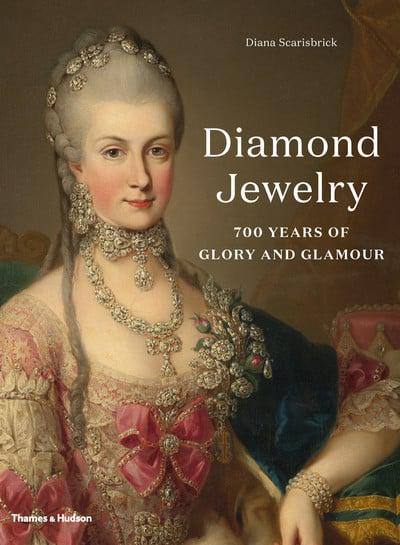 DIAMOND JEWELRY: 700 Years of Glory and Glamour By Diana Scarisbrick

Diamonds galore feature in this glorious new book by England’s foremost art historian of jewelry and gems. Much more than a bling fest, the book is a graceful pas de deux of brilliant text and illustrations.

Most fascinating are historical insights on some of the illustrious personages who commissioned and wore the jewelry. Napoleon believed in the power of spectacle and was ablaze with diamonds at ceremonies and public events. But in private, Scarisbrick tells us, he cared little for finery. He followed the advice he gave to others,” Be thrifty and careful with your money in private but magnificent in public.” Mme. Pompadour makes an appearance with her penchant for tinted pastel diamonds set in rococo floral designs. We learn that Margaret Thatcher collected antique jewelry, and her signature brooch was a Georgian jessamine, or jasmine flower, rendered in diamonds.

Some of the world’s greatest jewels have been lost or disassembled or dispersed to the far corners of the earth via auction houses. Recently, even a few pieces of Marie Antoinette’s poignantly beautiful diamond and pearl jewelry (one pendant alone sold for 36 million dollars) caused quite a stir when they surfaced at Sotheby’s, 225 years after the queen’s guillotined demise. Thankfully, museums and royal collections, contemporary antique jewelers and collectors treasure these sparkling miniature works of art. Diana Scarisbrick’s love of jewelry sparkles and shines on–yes, like a diamond–on every page. 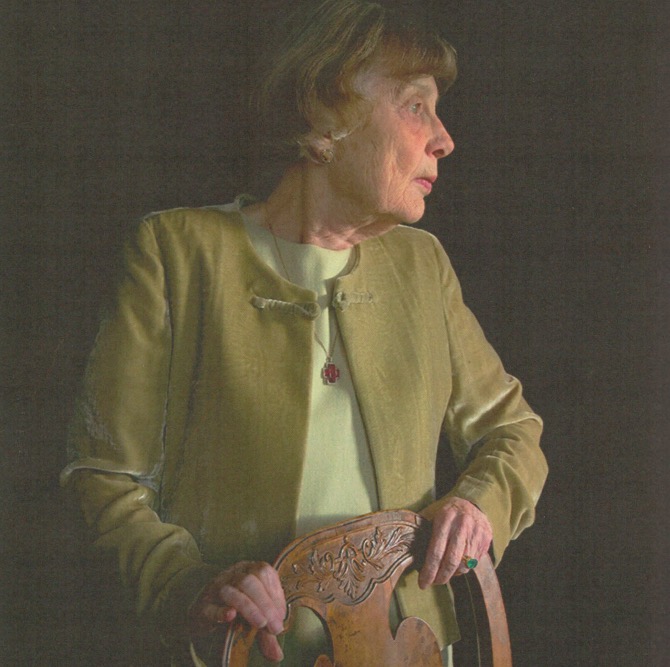 What’s on your nightstand now?

King of the World: The Life of Louis XIV, Philip Mansel, 2019

A pair of diamond souvenirs given by the Duchess of Northumberland to Mr. and Mrs. Charles Percy to mark their attendance at the great coronation of Charles X at Reims in 1825: the Duke being present as representative of George IV. I found the correspondence about them from the designer at Rundell, Bridge & Rundell with the Duchess in the Alnwick Archive. The letter “C” for Charles is back to back and surmounted by the French crown with lilies. 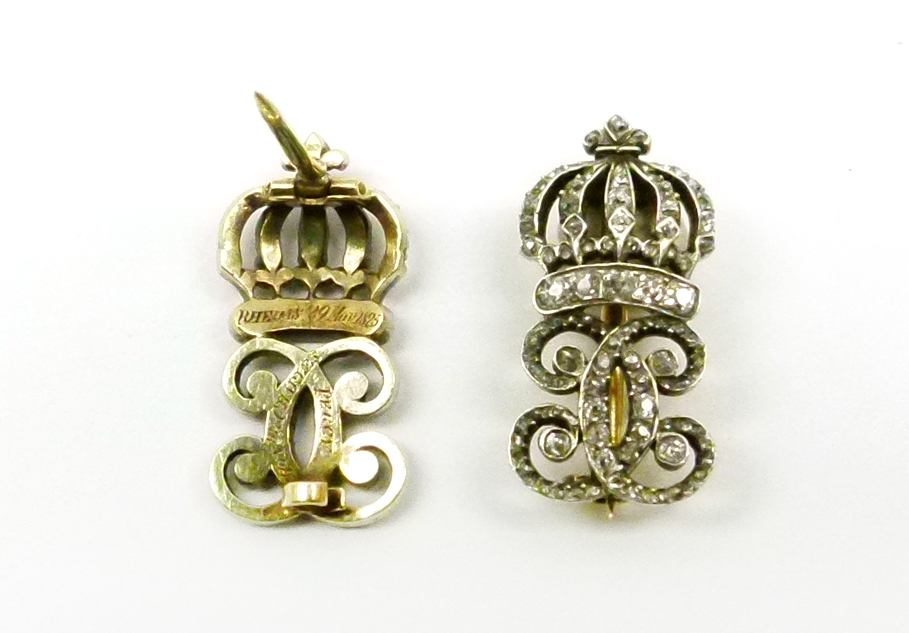 A spinel cross that is carved on both sides and the rose diamond border discreetly enhances the color: late 18th century with a Lichtenstein provenance. I’m wearing it in the photo.

The Burgundy region. Dijon and other cities connected with the Valois dynasty, and also Vienna and Rome.

Where do you buy antique jewelry?

I’ve been going to S.J. Phillips in London for years.