Far away and once upon a time, chateaus seemed the stuff of fairy tales. You’ve seen them — in a TV period piece, a tour of the famous cluster in France’s Loire valley, or a car trip through the European continent with a view of this enchanted edifice glimpsed beyond impenetrable ironwork gates often topped with gilded ornaments.

Unlike castles upon hills that were once fortified and moated and oft besieged (though, of course, families lived there too), chateaus were and still are family homes. Who knew (I didn’t) that today there’s even a well-known French architect who specializes in helping clients renovate and restore their historical homes. I sat next to this learned gentleman of impeccable grace and manners at dinner one evening, at my friends Nick and Ireide Walker’s Normandy chateau.

In a dining room lit with candles, sparkling crystal, bounteous dishes and witty company, not to mention a glass of Chateau D’Yquem at hand, I felt I had time traveled back into a page of Madame de Sévigné famous letters. Enraptured, I listened as the owners and architect Etienne Dupre talked history and discussed an upcoming project to restore the kitchens and the front yard as much as possible to the original 18th century plans. Though original architectural renderings of the chateau are available, it turns out there were no records kept of the grounds. However, it’s known that “front yards” were austere. A large span of yard with nothing but grass was a status symbol, indicating the owners had land to spare.

But the “back yard” is where the action happened, with plots of herbs, vegetables, flowers and trees, follies, mazes and waterworks. Gardens were parklike places of serenity and safety (no highway robbers afoot). Since most people were rarely alone until our more modern times, the garden was a place for a postprandial stroll as well as an outdoor office for a private conference, or a romantic rendezvous of rustled petticoats and sweet whisperings.

Constructed between 1708-1742, the chateau was built to classical standards of perfection — symmetrical and balanced wings with a grand front hall running east-west as one enters. On the grounds is a pigeonnier, stable buildings, garage, a newly restored chapel and more. Mascaron faces have glanced down these last few hundred years at visitors who once entered the gates by horse or carriage, and two original stone carriage steps with worn grooves still grace the entrance to the front doors.

Over the last few decades, the Walkers have breathed love and devotion into the old walls. 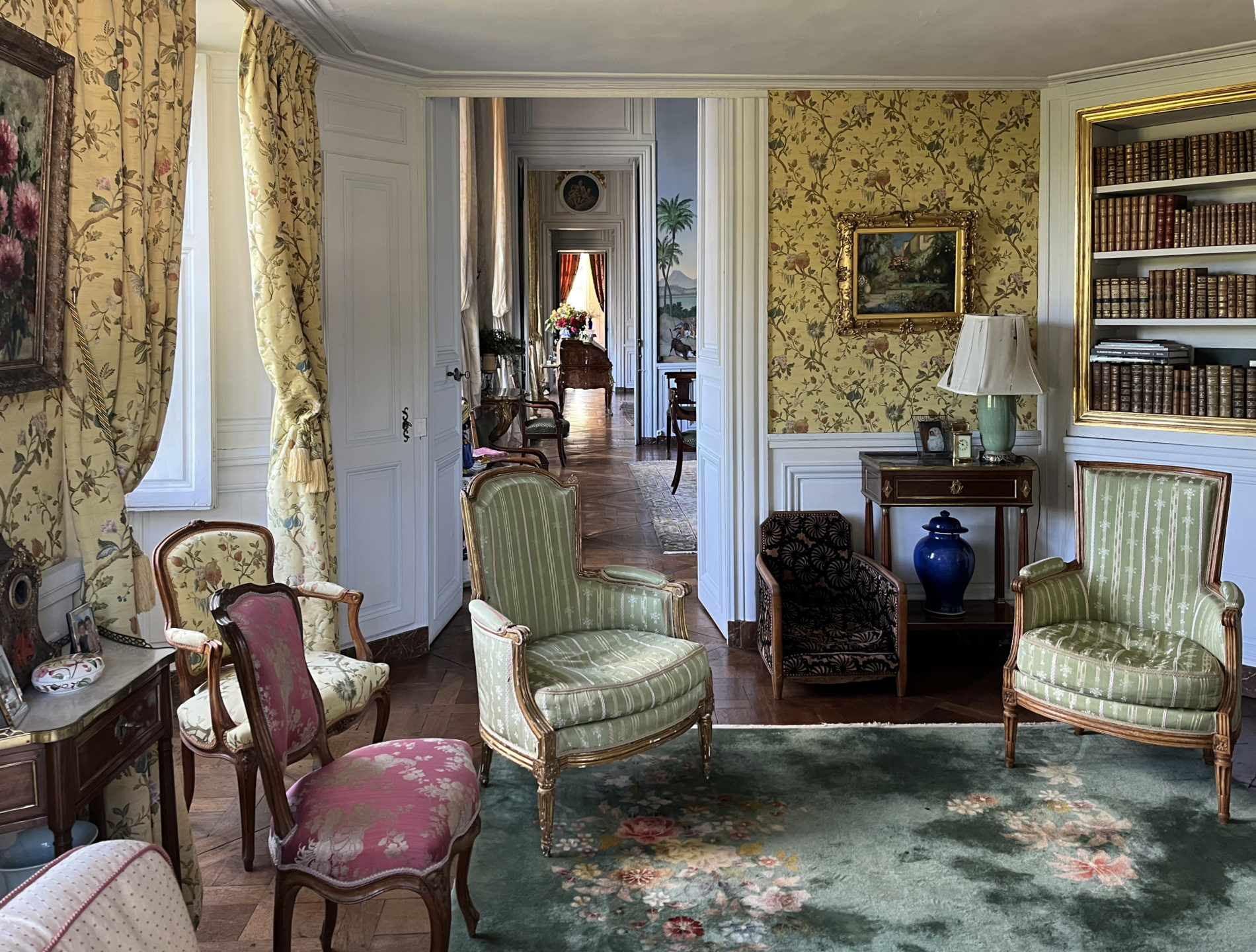 Nick: taking responsibility for actively conserving a piece of history.

Ireide: the quiet, the space, closeness to nature, with proximity to Rouen and Paris, hosting friends and family. And my vegetable garden.

How did you find the chateau?

Nick: summer 1997 we took a vacation in France and picked up a property magazine at the train station. It was a buyers’ market, so many attractive offers. We contacted Philip and Patricia Hawkes, English real estate brokers who are based in Paris. They set up visits to 5 properties over a week in October. Yville was the best by far.

Did you instantly fall in love with it?

Nick: Yville was perfect. Built at the beginning of the 18th century on plans by Jules Hardouin Mansart, plenty of land, close enough to Paris, in great condition.

Ireide: I like the covered farmer’s market in Rouen for fish, meat, cheese, delicacies and spices, and a great butcher’s shop called Maison Bizet on rue Rollon.

Nick: fabric showrooms are Nobilis, Lelièvre, Rubelli, and antique dealers in Paris clustered on the left bank near Bld. St Germain. Many auctioneers operate out of “Hotel” Drouot at 9 rue Drouot in the 9th. I also like Artcurial on the Champs Elysée and Delphine Lejeune’s Normandy-Auction in Rouen. Regional auctions are plentiful.

Tell us about the mural in your dining room?

Ireide: the mural in our dining room is actually a wallpaper by Zuber. At the beginning of the 1800s these panorama wall papers were very fashionable. Ours depicts colonial Brazil. It was drawn around 1820 and reproduced in wood cuts for production by hand at Zuber in eastern France.