Most likely from your local sushi restaurant for serving the cold, light golden beer made from rice, which was invented in 1876 in the city by the same name.

Or from being a snow buff. Sapporo, located in the north of Japan with world-class skiing, hosted the 1972 Winter Olympics.

Sapporo has become known throughout the world for its snow and ice sculptures. If you’re templed out and you can’t ski or snowboard but you like the white stuff, jump on a quick flight to the island of Hokkaido for the 71st Annual Snow Festival. 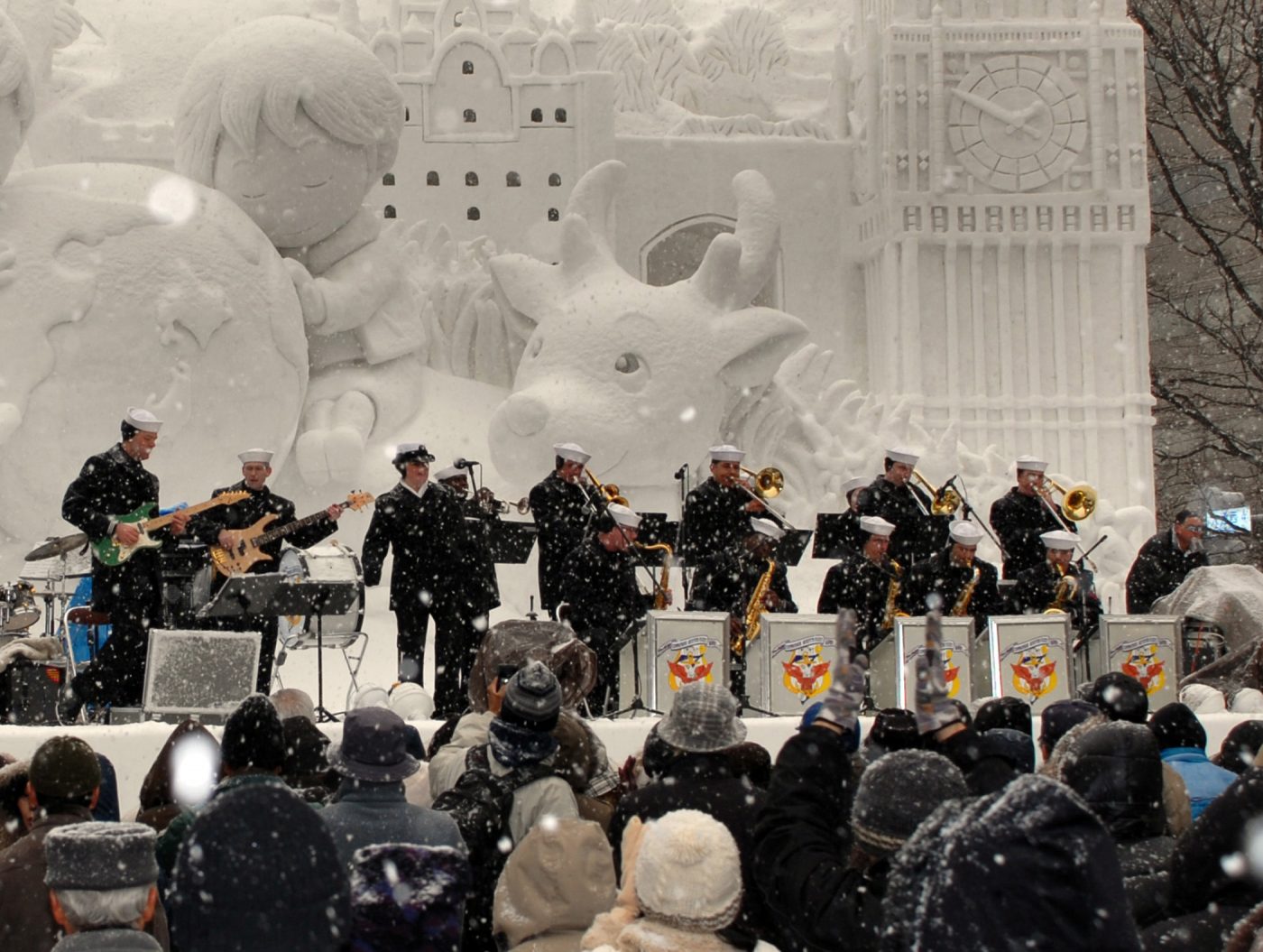 Members of the U.S. 7th Fleet Band perform in the snow during the 2008 Sapporo Snow Festival.***Ben Farone***

2020’s snow festival, the Yuki Matsuri (Matsuri means festival in Japanese, so now you know two words in Japanese, because you can guess the other one) runs from January 31st- February 11th and is spread over three sites. There are approximately 200 sculptures, with Odori Park presenting the greatest number of building size snow carvings that include built-in laser light shows. It’s mind-boggling to witness the immensity of them. In the Susukino District (also good for nightlife) there are a number of more intricately carved ice sculptures, and you can vote for your favorite one, as well as make your own. 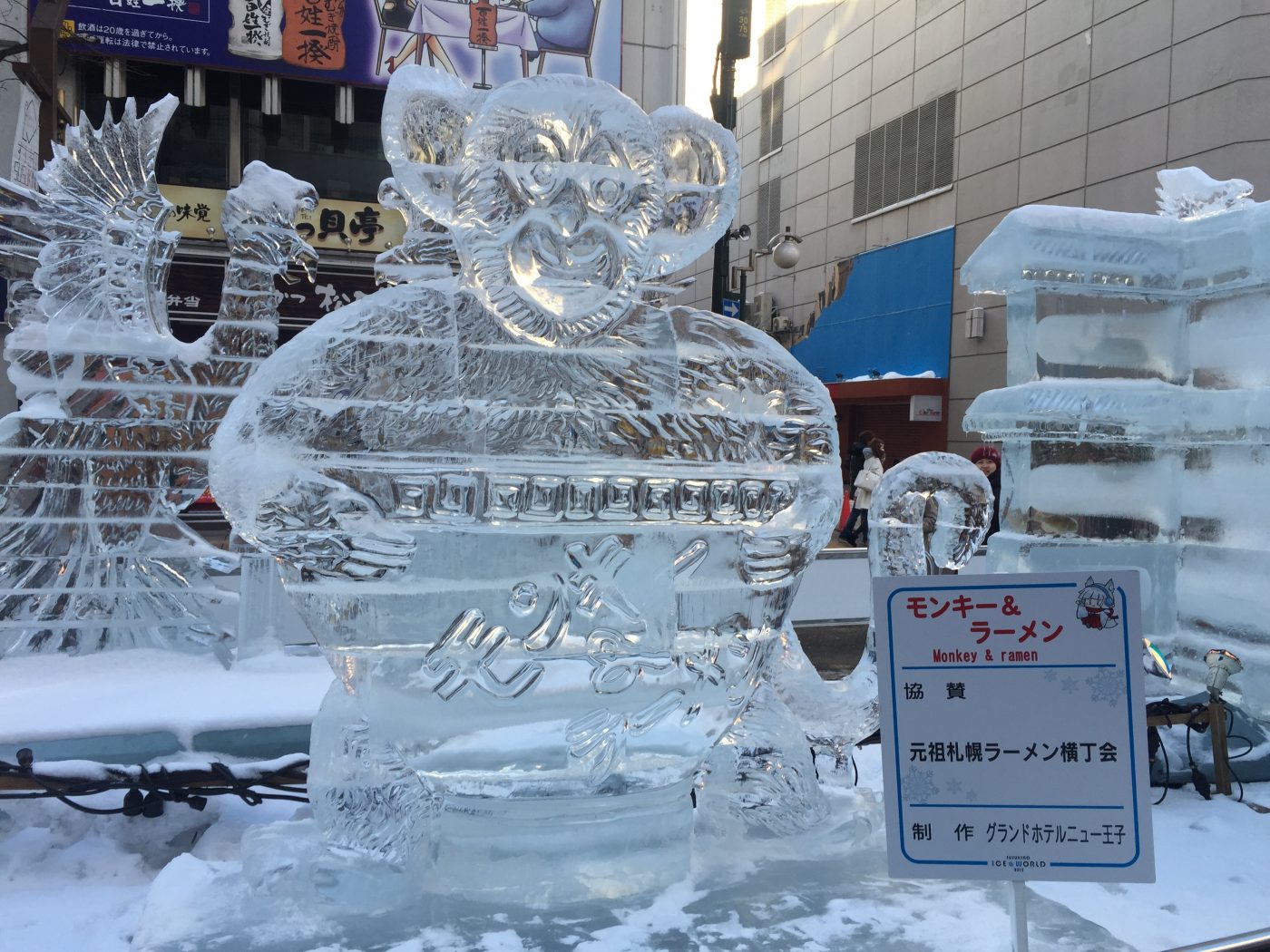 A monkey eating a bowl of ramen. Now we’ve seen everything.

And thirdly, at the Tsudome there’s fun snow play for both adults and children including snow rafting down the hills, giant snow slides, skating rinks, and zip-lines. You get all of this for the great price of free!

These snow and ice sculptures, which are seen by two million visitors a year, are made by members of Sapporo’s City Hall, volunteers, the teams from the International Snow Sculpture Contest and a special unit of the Self Defense Force, a division of Japan’s military. We can’t confirm if these carvings are armed.

The Odori and Susukini sites are open 24 hours but are lit until 10 p.m. and 11 p.m. respectively, every night, and the giant snow slides at the Tsudome Site are open from 9 a.m. to 5 p.m.; plus there’s a stunning fireworks display on the final night.

Sapporo is set out in a grid pattern, making it easy to navigate. But Sapporo’s known for its frigid temperatures — the average temperature during the festival is 27 degrees — so pick up a pair of kairo, Japanese disposable hand warmers (hey, that’s the third word!), and wear sturdy grip boots against the ice. Or escape into the underground subway system, which is a whole surreal subterranean city of shopping malls.

If you think you’ll just be a Johnny-come-lately and simply catch a glimpse of these monolithic sculptures on February 12th, guess again. They’re destroyed the day after the festival for safety reasons.

Remember to check out the festival’s exquisite food stalls, which sell the famed Sapporo miso ramen, topped with sweetcorn, butter, and either finely chopped pork and garlic or local seafood with huge scallops and king crab. And be sure to wash it all down with a cold glass of, well, you know.

Below are some examples of the gargantuan and intricate sculptures so you can understand what we’re talking about here. This festival is so spectacular, you’ll certainly want to toast a pint of Sapporo to it. 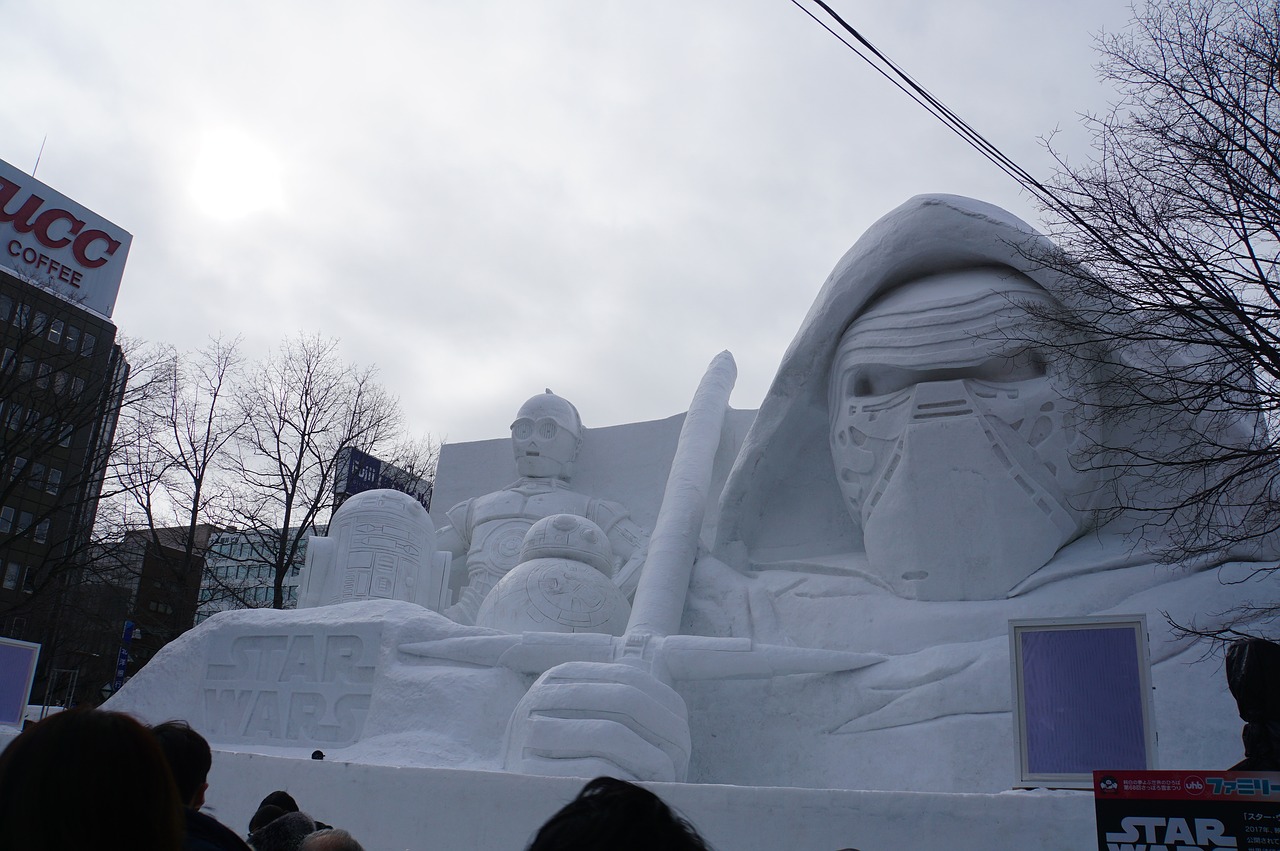 The force is strong with this sculptor 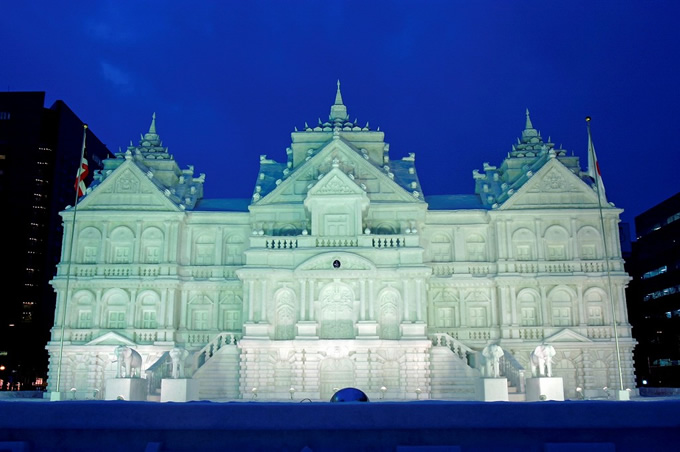 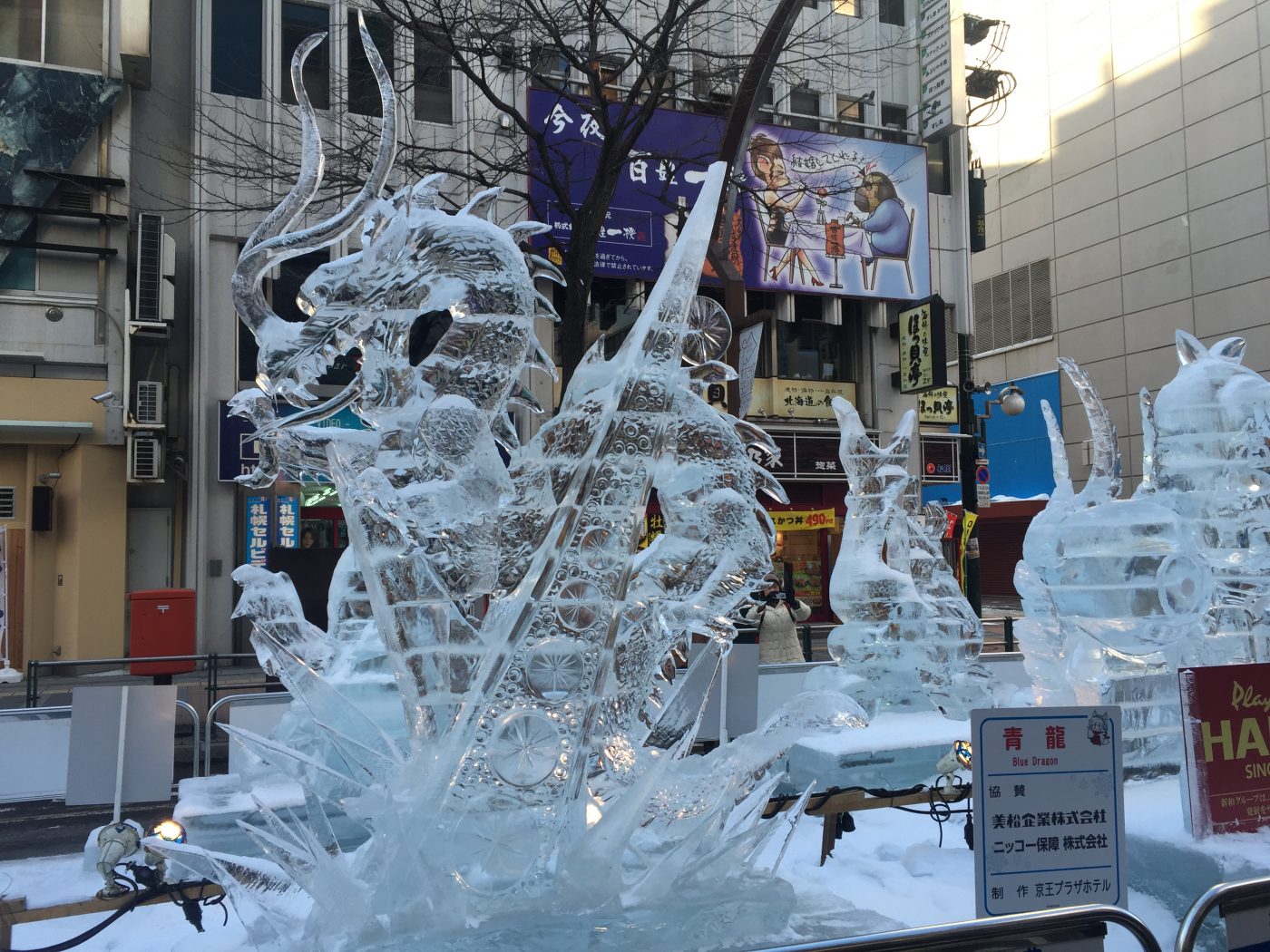 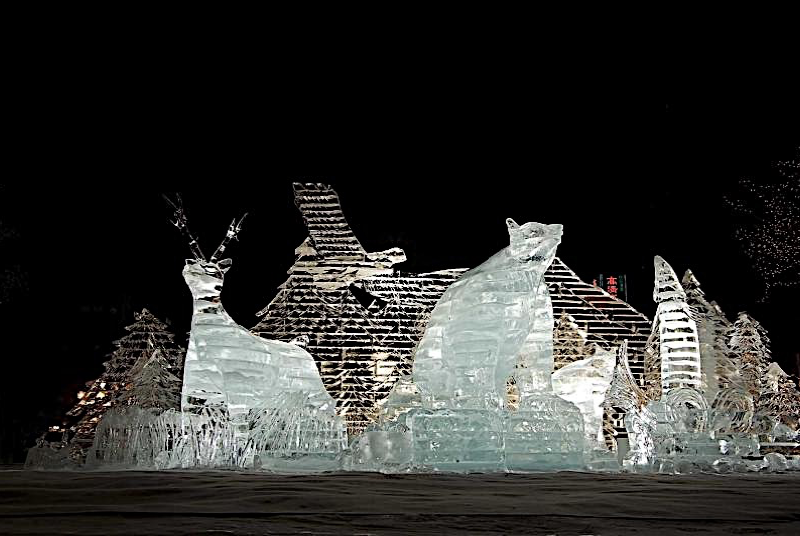 In your how-to-sculpt-ice class, they’ll give you smaller blocks than this so don’t worry

The Hanami Festival has been going on for centuries in Japan and is deeply meaningful. Here is how some of it was captured in the early years of photography 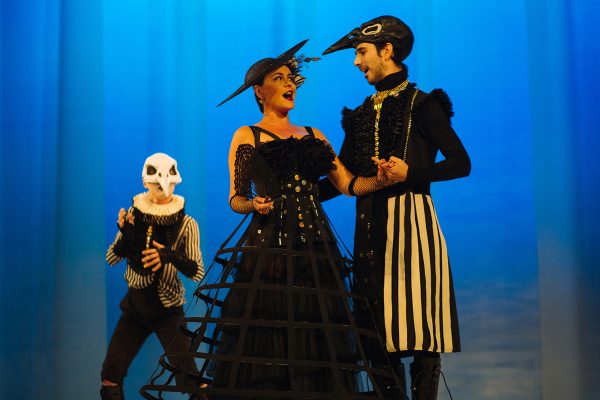