Minneapolis is one cool city and it’s not just because they’re hosting Super Bowl LII. It has a twin, St. Paul; it’s chock-full of restaurants, breweries and bars; it’s an outdoor mecca of water, parks, trails and winter activities; and it was cool enough for Prince.

Believe it or not, Minneapolis is consistently ranked as one of the fittest cities in the nation. It is home to 197 parks, and the furthest distance you’d have to walk to get to one is six blocks. Try it! They also have 200 miles of bike trails, and since Minnesota has more shoreline than California, Florida and Hawaii (it’s true!), you’d be hard-pressed not to see some water — Minneapolis has 13 lakes and lies on both banks of the Mississippi River. We would suggest taking a kayak with you, but the average high temperature in February is 29 degrees. Luckily, you’ll be in a dome for the big game, but if you forgot to pack a heavy coat, they have tax-free clothing!

You’ll be lucky to find a place to stay for the Super Bowl, but U.S. Bank Stadium is also home to the 2018 ESPN X Games and 2019’s NCAA Final Four. Plan ahead! 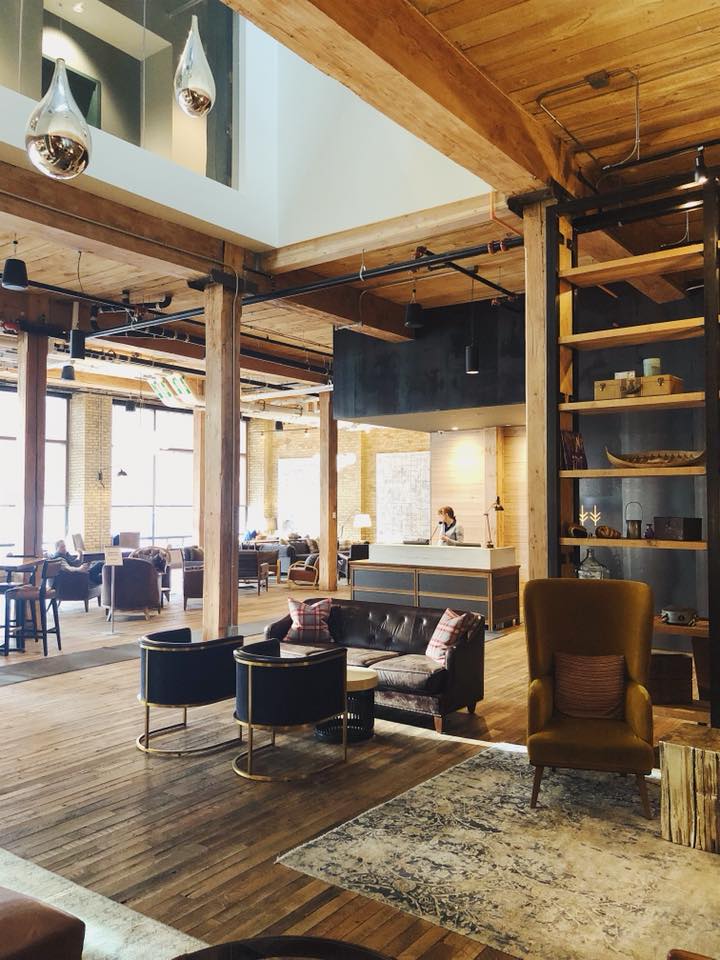 Rustic lobby of the Hewing Hotel

Hewing Hotel in the North Loop is adjacent to downtown and is near theaters, the Mississippi River and Target Field (home of the Minnesota Twins). Each room in this 111-year-old converted farm implement warehouse is different, and combines luxurious amenities with rustic touches like exposed timber and a locally-sourced private bar.

Hotel Landing on Lake Minnetonka has 92 suites and the Läka Spa, inspired by Minnesota’s Nordic heritage.

If you’re bringing the kids, Marquette Hotel is a family-friendly luxury hotel downtown with several large upper floor suites with sweeping views of the city. They also have a cookie baking class for children. (Can we get in on that?)

Bar La Grassa chef and co-owner Isaac Becker won the James Beard Award for Best Chef Midwest in 2011, and was a semifinalist for Outstanding Chef in 2014, which means good food lives here, including a steak large enough to feed an entire offensive line. (OK, just four of them.) They usually only serve dinner, but are open for lunch the week of the Super Bowl. Best news: they’re taking reservations.

If you can’t get in to Bar La Grassa, Becker has sister restaurants 112 Eatery and Burch, which is a steak and pizza bar. Try 112 Eatery’s Octopus & Clam Brodetto, or Burch’s Colatura Di Alici pizza, with spicy Thai sausage. 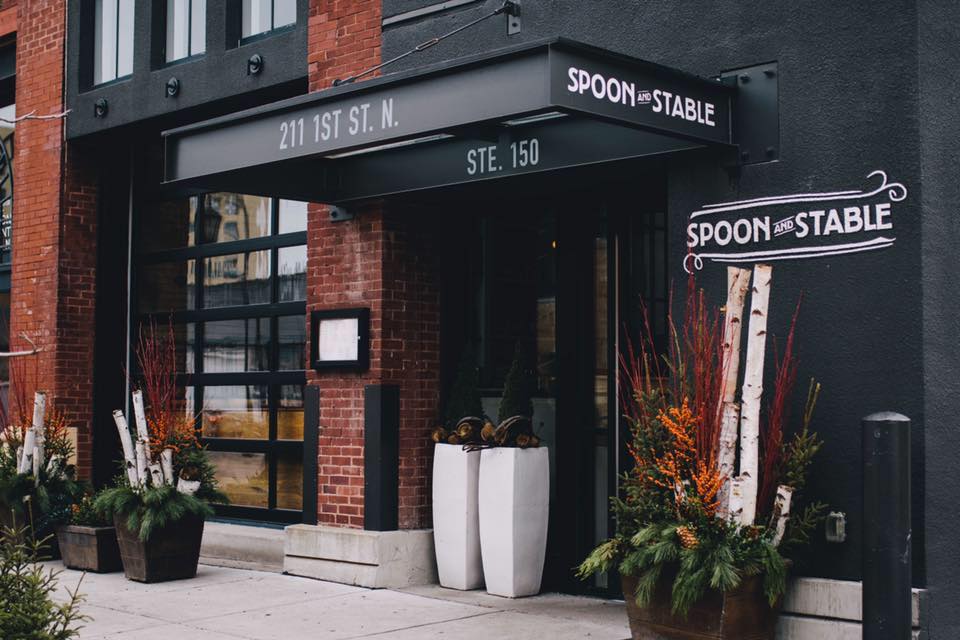 Spoon and Stable in North Loop is in an old horse stable and is the brainchild of James Beard Award-winning chef Gavin Kaysen, who hails from Minneapolis. The food is French-inspired with a local Midwestern seasonality focus. Their brunch menu includes raw oysters, bison tartare, trout roe and good ol’ sausage and biscuits.

Also in North Loop is The Bachelor Farmer, a “come-as-you-are” attired whole-animal-butchery restaurant with locally sourced ingredients. They grow their own herbs and vegetables on their rooftop farm, which was the first of its kind in Minneapolis.

Restaurant Alma and the Alma Cafe are both part of Hotel Alma (their exclusive seven guest rooms are long-past booked…sorry), but are two completely different dining experiences. Restaurant Alma is in a redesigned historic firehouse and an old speedboat factory, and only serves dinner. The Cafe is a walk-in style bakery with counter, bar and table service. 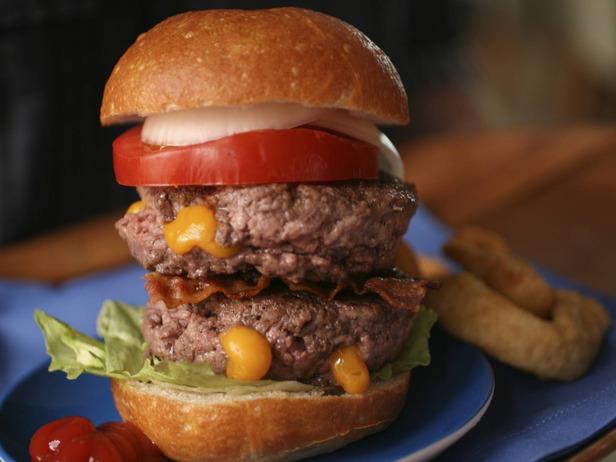 Say CHEESE: Has a burger ever looked so beautiful?

Minneapolis is home to a burger so legendary, bar wars were waged over who created it. Not really, but no one knows exactly who gets credit for it, and every local has their favorite Juicy Lucy joint. The magic burger is juicy, being named for the two pieces of cheese tucked inside the burger patty. Nothing too fancy here! Here’s where to get your mitts on one:

Matt’s Bar claims to have the original Juicy Lucy and probably does. Soon after it opened in 1954, a customer requested two hamburger patties with cheese in the middle. After he took a bite, he exclaimed, “That’s one juicy Lucy!” (Wouldn’t you? It’s like cheese lava in there!) Demand grew for the burger and the staff was so excited that they spelled it “Jucy Lucy” on the menu. They claim if it’s spelled right, you’re in the wrong place. With a motto like “Fear the Cheese” we tend to agree.

But wait, there’s the 5-8 Club! The Prohibition-era speakeasy’s Juicy Lucy has also been around since the 1950s, and racks up awards for being the best.

No matter who made it first, or who wears it better, imitation is the best form of flattery, right? Head to the Blue Door Pub for a “Blucy” or Casper’s & Runyon’s Irish Nook in St. Paul for all kinds of stuffed burgers.

Pig Ate My Pizza has 16 (mostly local) brews on tap and is across the street from Wicked Wort Brewing Company, which has 10 different craft beers at all times. Tours are available and must be scheduled two days in advance. 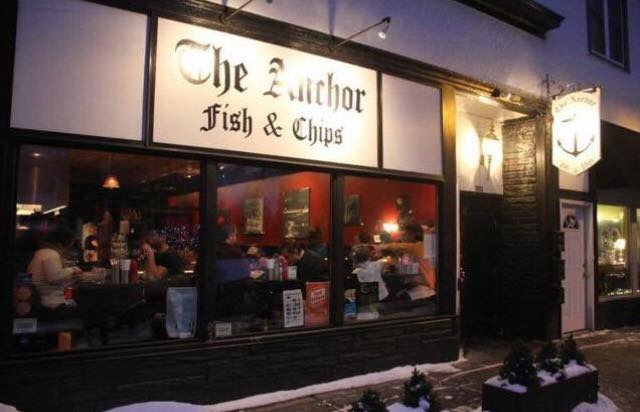 Anchor down for authentic fish & chips

The Anchor Fish and Chips is a beloved authentic Fish & Chipper serving Alaskan cod and hand-cut chips. They serve a full Irish breakfast on weekends, and local Brent Brewstillery uses their potato cast-offs for a special Bent Anchor Poitín (Irish Moonshine), which is available all over Minneapolis. 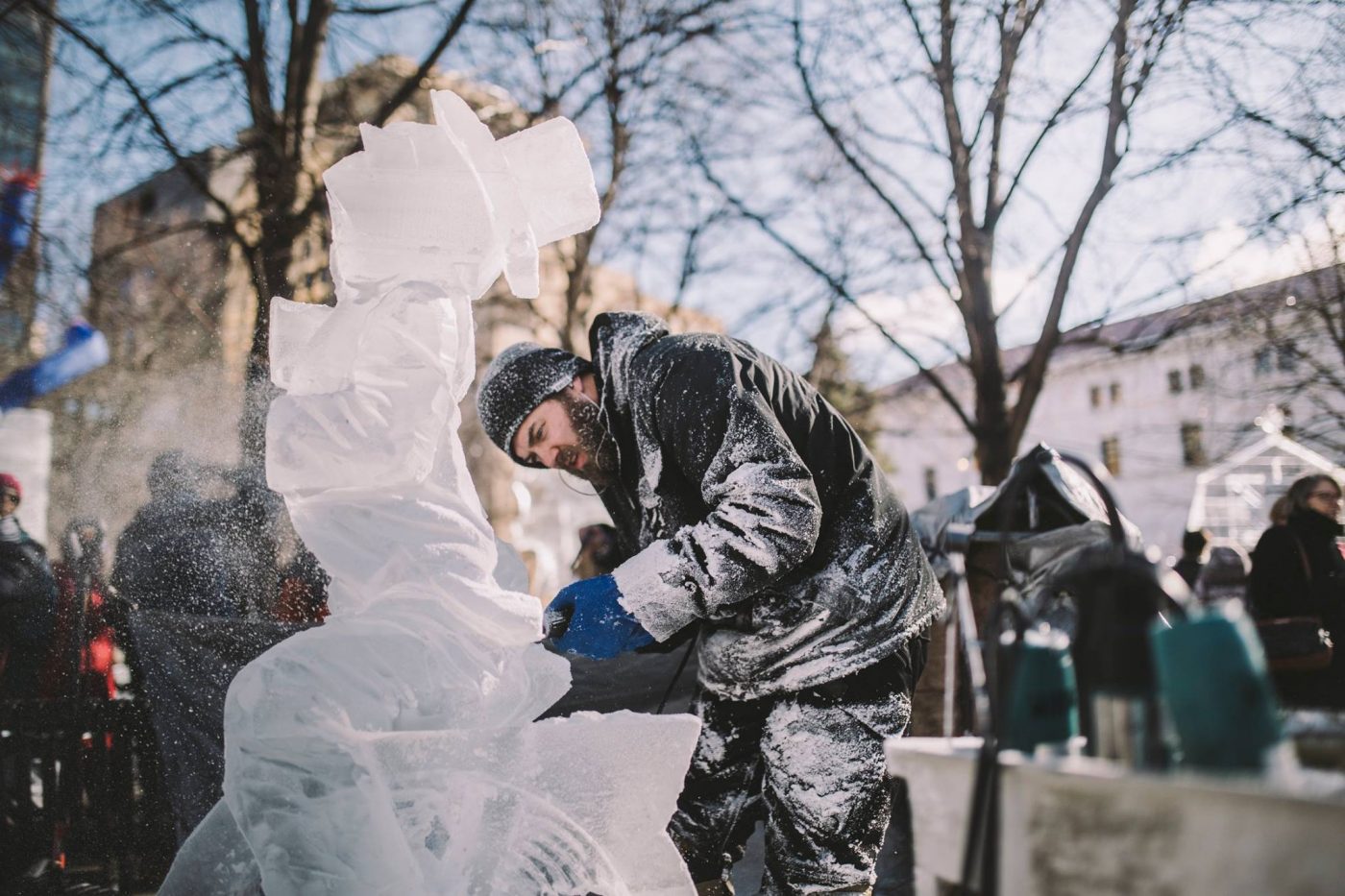 The Annual Great Northern Festival is taking place leading up to the Super Bowl, and is a 10-day outdoor celebration with ice sculptures, snow sculpting competitions, the U.S. Pond Hockey Tournament, a snow plow competition, a Boot Hockey tournament and the Tow Up Throw Down shred series, which invites skiers and snowboarders to be towed up a hill, only to be thrown down again by a bungee cord.

The Jack Link’s Wildside Store is a jerky lover’s paradise, complete with a life-sized Sasquatch for Instagram photo-ops. Your friends will be jealous.

Take a self-guided tour through Prince’s Minneapolis or make a pilgrimage to Paisley Park.

If one of your travel companions wants to visit the Mall of America, you don’t have to kick and scream. Smaaash is a 40,000-square-foot haven inside the enormous mall, offering multi-level go-karting, virtual reality gaming and laser tag, with a full service bar and restaurant.

High-tech gaming not your thing? Try Up Down, Minneapolis’ own old school arcade bar. All games are only 25 cents, and include 50 arcade games from the ‘80s and ‘90s, pinball machines, four classic skee-ball alleys, Nintendo 64 console gaming, life-size Jenga and Connect Four.

With all this happening in Minneapolis, who has time to watch a football game? 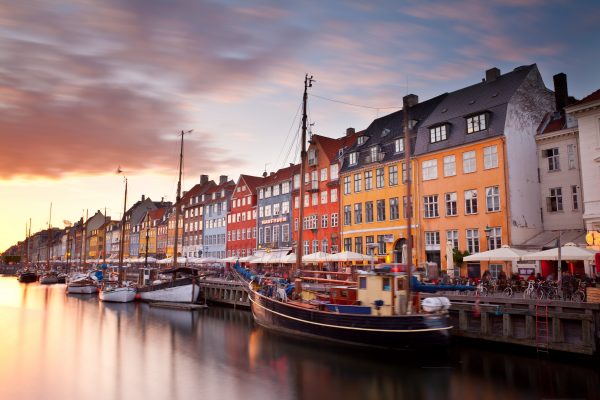