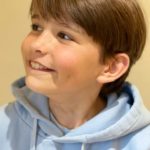 George Spedo Mirandola is 10 and a half years old (the half is very important!). He lives in Bath in England, he plays piano and has just joined a scout troop. He wrote the poem as an entry for the Blue Peter COP26 competition. (Blue Peter, a children’s program in the UK, and COP26, the 26th conference of the Conference of the Parties), which is scheduled for November of this year in Glasgow and will be attended by the countries that signed the United Nations Framework Convention on Climate Change (UNFCCC) – a treaty that came into force in 1994.

Our planet is melting

Our planet is melting

It’s disappearing out of sight

Our trees are falling down

When I look around

The world looks grey and weak.

Our ice creams are melting,

If we don’t stop polluting

Our world will be dirty as a deep, muddy hole.

But if we get off the sofa,

We could walk down to the beach

And start to clear up the poor, beaten sea.

Plastic is floating around the ocean

And everything that I can see

Is a huge mass of stuff connected to wi-fi.

So, everyone has to stop this

So we can live together with nature

And stop the poles melting too!

SO WE'RE MOVING TO MARS