Winvian Farm is 99 acres of ultra discreet luxury tucked in the middle of bucolic Litchfield and Morris County, Connecticut, about two hours north from New York City. The first known structure on the property was built in 1775 by a doctor named Seth Bird, best known for bringing a coffin along with him to house calls. His name lives on, twice, in the main structure on the property, The Seth Bird House, and the Seth Bird Suite, which occupies the entire top floor of the house. In 1948 Winthrop Smith, the founder of Merrill Lynch, bought the estate for his family, and renamed it “WinVian,” for him and his wife Vivian, a well-known actress in her own right. The couple and their son raised livestock, grew vegetables, and hopefully threw some raging parties when they convinced their city friends to come up for the weekend.

After Winthrop’s passing, Vivian married Charles McVay, and it was their children and grandchildren who led the construction of the first handful of eccentric cottages and the idea of opening the property to the public.

Seventy-one years, 15 architects and 19 uniquely themed cottages later — it opened in 2007 — you have the current version of this property that is somehow rustic, modern and playful at the same time. And very unusual. 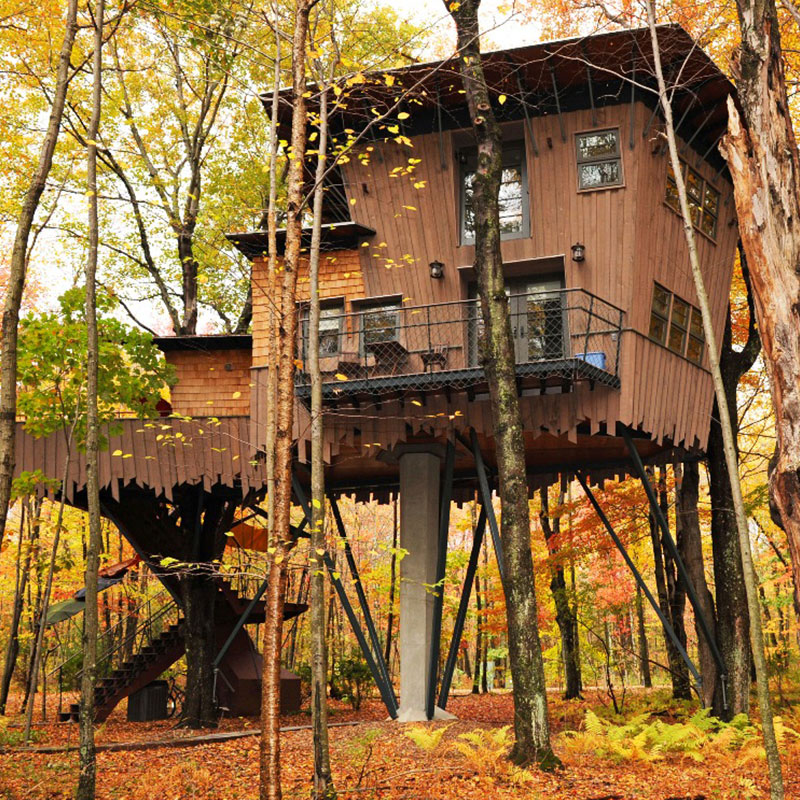 Arriving at the property feels more like showing up to a rich friend’s country home than it does to an exclusive resort. The first thing you encounter, and must negotiate, is a low wooden gate with an endearingly vintage speaker box. Once in, you drive past signs for the spa, pool and a few of the cottages, and arrive at the courtyard of the Seth Bird house, where I was greeted kindly by a staff member who appeared out of nowhere (this happens often, you’ll get used to it) and proceeded to take me through check-in even though there is no desk or computer in sight. Instead, I was led into the main parlor room of the house that had a clubby but not stuffy feel, and shown to a deep, comfortable leather chair flanked by a billiard table and a fantastic vintage shuffleboard table. An adjacent room to the left has more comfy couches and a lovely view of the lawns leading to the garden and the spa building beyond. There is a small bar, but nowhere to actually sit at it, and drinks are offered 24/7 by whoever is on staff.

The list of matter-of-fact cottages is staggering and each has a different theme, size, layout and location. Charter Oak is a silo and barn built around a giant oak tree. Helicopter is a huge retrofitted helicopter in a barn. Connecticut Yankee is inspired by the Mark Twain book, Connecticut Yankee in King Arthur’s Court. There are cottages with library, maritime, log cabin, golf and music themes, and even a secret society-themed cottage. Many are easy walks to the main house, the pool and the spa. If you don’t like walking, simply call for a ride by golf cart or SUV to get anywhere, depending on the weather.

I stayed at the Treehouse cottage, one of the farthest away. You are completely immersed into the surrounding forest, without distractions, which is glorious. The Treehouse is suspended 35 feet above ground and is a cross between Ewok Village and Treehouse Masters. Playfully angular on the outside, it seems to be leaning in three different directions at once, and the colorfully decorated interior with mismatched shaped pillows and hidden built-in fridges and ice makers in the living room give it an upscale college-hang-spot-feel while having all the creature comforts you could want. The bathroom alone, with its heated floors, massive Jacuzzi and built-in steam shower with views of the surrounding forest is very impressive. 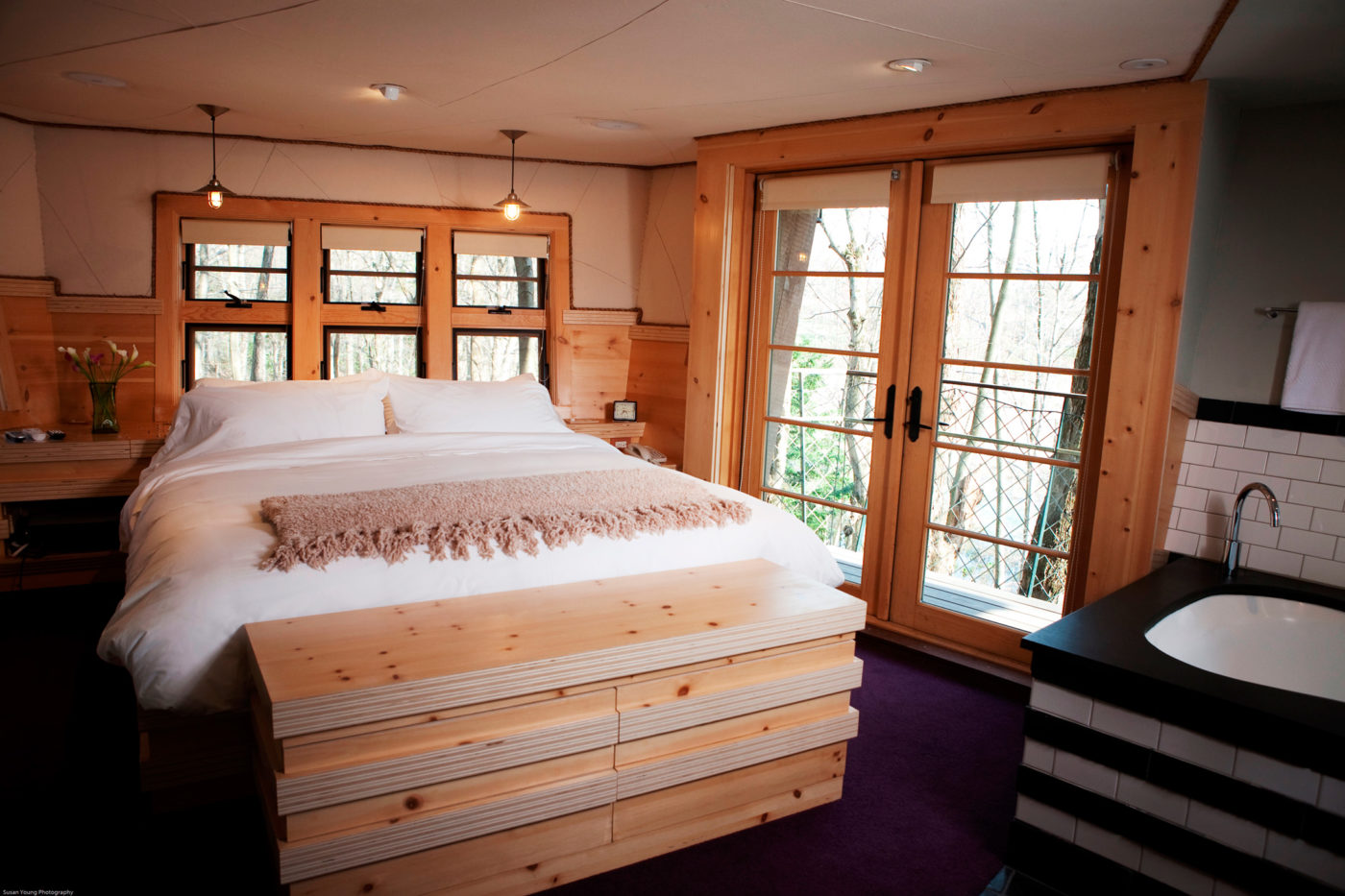 I happened to be out on the balcony as a thunderstorm was rolling in. Several thunderclaps, gusts of wind and flashes of lightning with trees that are scary close to the cottage became a rather intense but memorable experience. I needed to take the thunderstorm steam shower…it was legendary. Sitting in tranquility, 35 feet up in the air and relaxing in a mist of eucalyptus scented steam while right out the many windows, a few inches away, are violently swaying trees, pelting sideways rain and occasional booming thunderclaps is just the kind of unique experience I bet the architect and owners where going for when they designed this place. I imagine the Treehouse is just as good, if not better, in the winter, blanketed in snow or during a blizzard. The more time I spent in it, the more my connection to the surrounding forest grew, which in turn helped me become more comfortable with this low-ceilinged and strangely angled space, which is a clear sign the architect and interior designer knew exactly what they were doing when they designed it. Or they were drunk.

The spa is not huge, but like everything else at Winvian, thoughtfully designed, beautiful and most importantly, comfortable. The deep tissue massage was one of the best I have ever had. The masseuse managed to track down the origin of some tightness in my neck all the way down to my lower back and it hasn’t returned since. It is also one of the few spas in the country offering a full line of Biologique Recherche products and facials, kind of a big deal for spa aficionados. One of their signature treatments involves a second skin, or second peau as they call it, which is an electrospun mask made of 80% hyaluronic acid and said to be the closest thing to cosmetic injections in terms of results. 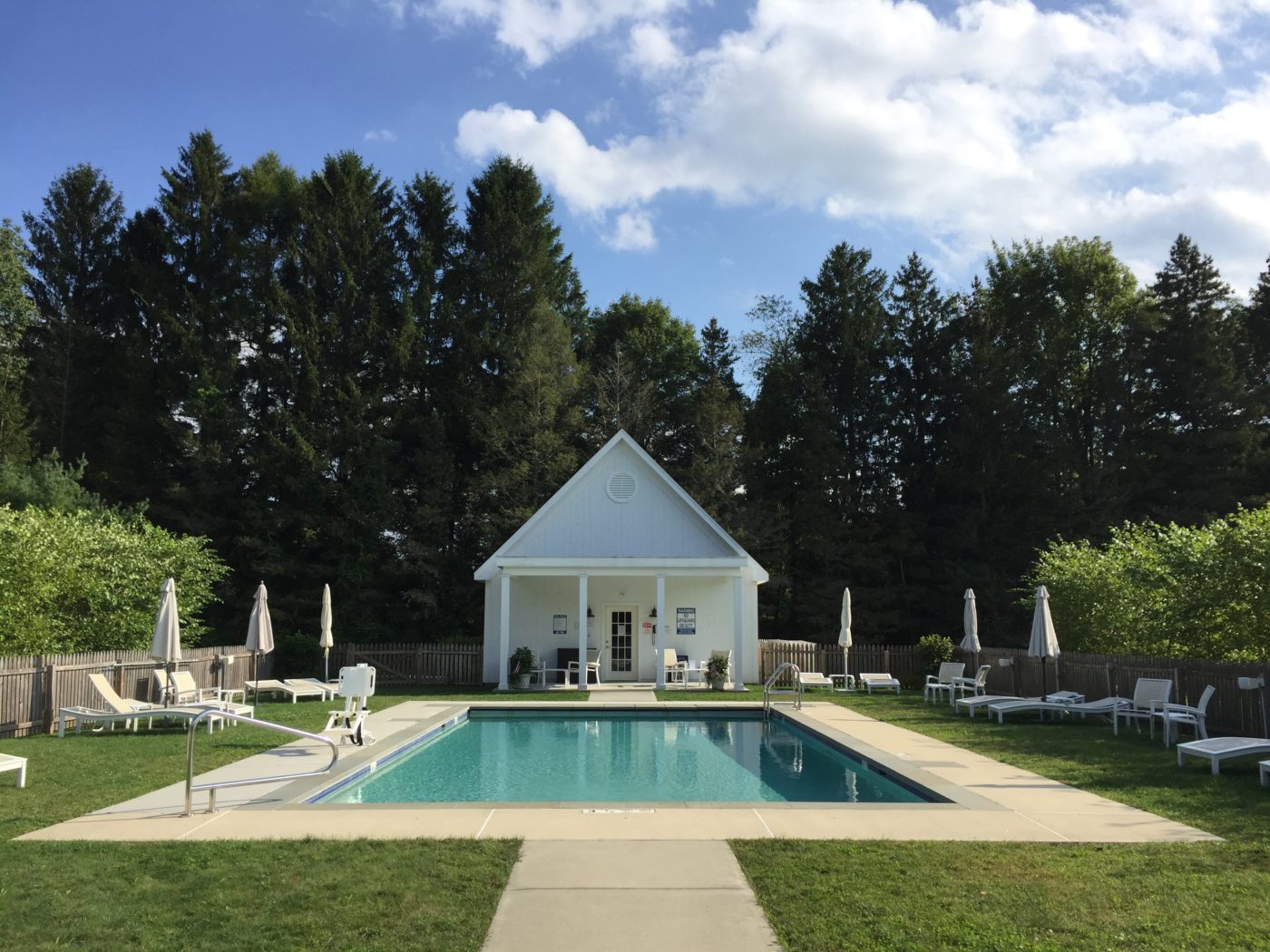 Winvian’s 40-foot swimming pool. That’s length, not depth, if you were wondering

Unlike many luxury destinations whose goal is often to try to keep you on site as much as possible eating, drinking and relaxing in different settings on the property, Winvian provides more of a “choose your own adventure” vibe. It can be a fantasy land of introspection, creativity and privacy within the confines of your own cottage, as well as one of personal/group adventures on the surrounding lakes, trails and mountains.

The amount of activities and excursions available is astonishing. There’s guided biking, hiking and canoeing/kayaking tours, as well as more unique options like fencing ($100 a person, gear included), hot air balloon rides ($500, hot air included), mixology classes, wine tasting from their extensive cellar (about $100-$150 per person) and renting out the entirety of the oldest continuously running movie theater in Connecticut, the Bantam Theater, originally opened in 1927.

The Livingston Ripley Waterfowl Conservancy is also nearby, one of the largest collections in North America, with 60 different species and over 400 different waterbirds from around the world. Go check some of these crazy birds out in person.

You also happen to be right in the middle of Connecticut wine/brewery/distillery country so there are no less than three wineries, three breweries and one distillery all a short drive away.

As much as I was looking forward to the Treehouse and massage, the type of activity I signed up for was one of indulgence, opulence, and gluttony, courtesy of chef Chris Eddy’s farm-to-table dinner, pastry chef Jim W. Hutchison’s desserts and one of the best wine cellars of any restaurant in Connecticut.

My friend and I ate everything on the menu except for two dishes, including all the desserts. We are not at all ashamed of that (see my full review of the restaurant here).

Chris Eddy provides unique and special dining thrills with stunningly good plating, without throwing too much at the casual diner or timid palate. This is not an easy thing to do, especially while maintaining one of the most hyperlocal menus in the tri-state area. Even if you’re not staying at Winvian, come here for the dinner.

I must warn you though, once on the property, you might start checking your calendar for the next free long weekend to explore the property further.

Cottages from $699-$1399, breakfast included. The scrambled eggs are legendary. 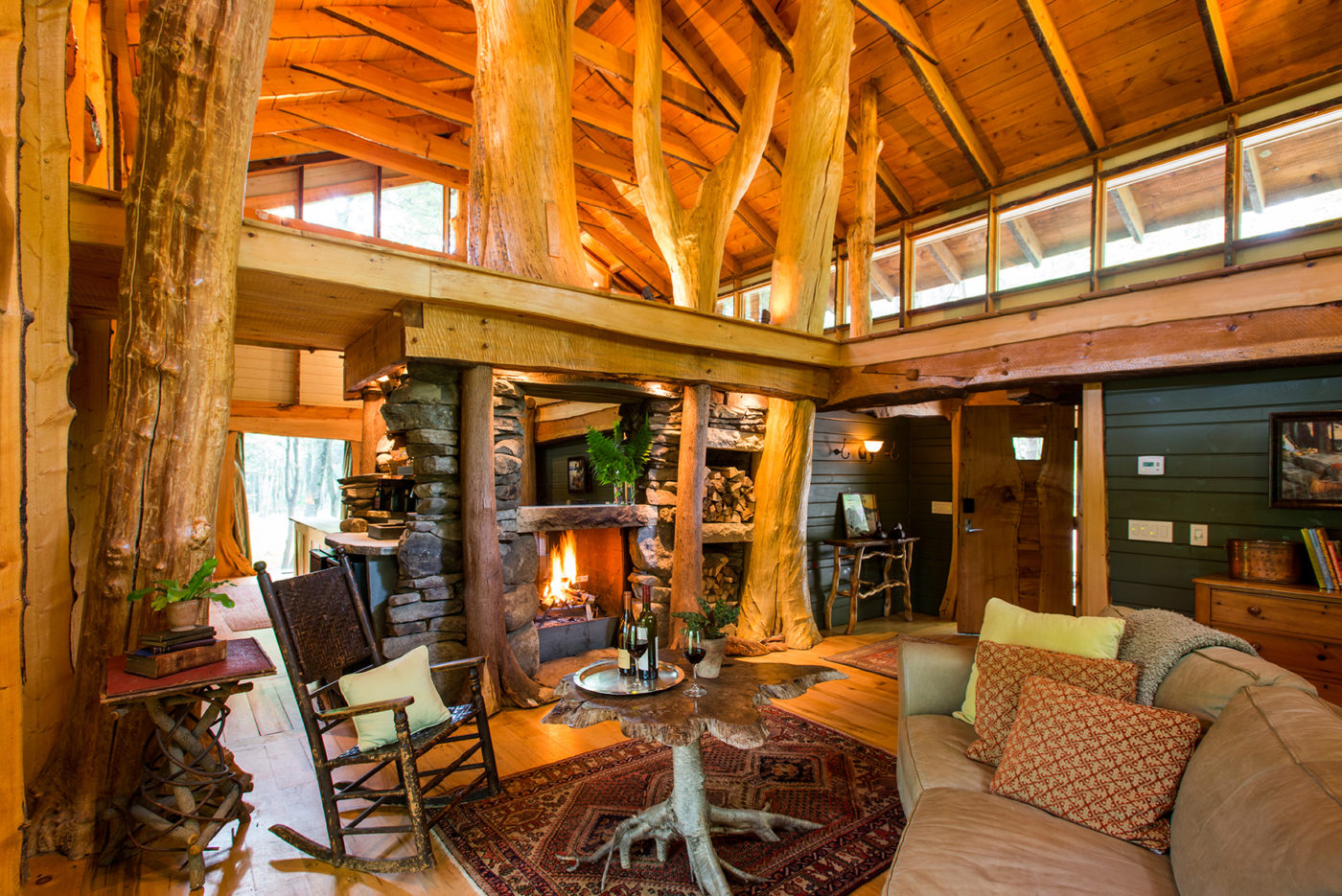 The soaring sitting room of the Woodlands cottage. They don’t charge for standing