Redundant statement of the day: There’s no shortage of hotels in Rome. The Eternal City is one of the most visited in the world, and for good reason: The art, the ancient architecture, the food, the history, the Vatican! Michelangelo! (And he’s dead! No-one cares! Still they come….)

So where should you stay?

We’ve compiled a list, by no means definitive, but these are our favorites, divided into three categories: The Classics, where tradition and history rule, updated for the 21st century; High Style hotels, sexy and design driven; and the Best Under 300 Euros Per Night, which is self explanatory. 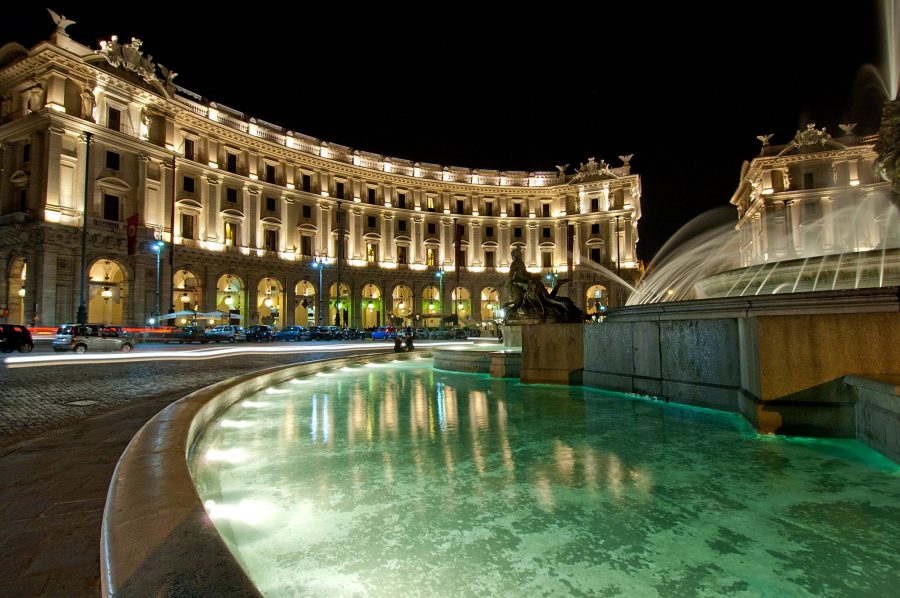 Situated on the Piazza della Repubblica near the Baths of Diocletian, in the heart of the city, the Boscolo Exedra occupies a completely modernized 18th century building. The hotel is large, with 238 rooms, and its on-site spa offers something called chromo therapy, or healing treatment through colored light. Sounds preposterous, but maybe it works! And there are multiple bars and restaurants, including a formal restaurant run by the renowned chef Niko Sinisgalli.

This is an extraordinary hotel. If you’re looking to be close to the action, but would appreciate a bit more privacy, the Cavalieri is your perfect choice. Set on fifteen private acres overlooking the Vatican — which, let’s face it, has to be one of the most exclusive hotel footprints in the world — the hotel offers guests the splendor of relaxed elegance and the pleasure of strolling through lush grounds without leaving the property. Enjoy the cityscape from the private club and pool; book a table at the hotel’s Michelin 3-star restaurant. The 345 rooms are boldly regal, and the hotel is full of art, from renaissance Italian through Warhol.

There are so many reasons to love this opulent hotel, including the stunning views from its excellent restaurant, and its prime location above the Spanish Steps. But it’s the history that makes the place — the Hassler is an icon, a classic born in the late 19th century, when sophisticated travelers were inventing the idea of the Grand Tour. This was the place to stay, and still is. Be sure to check out the Hassler Bar, meticulously restored in 1940s fashion, and once a favorite of Princess Diana — you know, to name drop. There are 92 rooms and suites, many done in distinctive styles, from serene white-on-white modern to wood-panelled old school elegance. 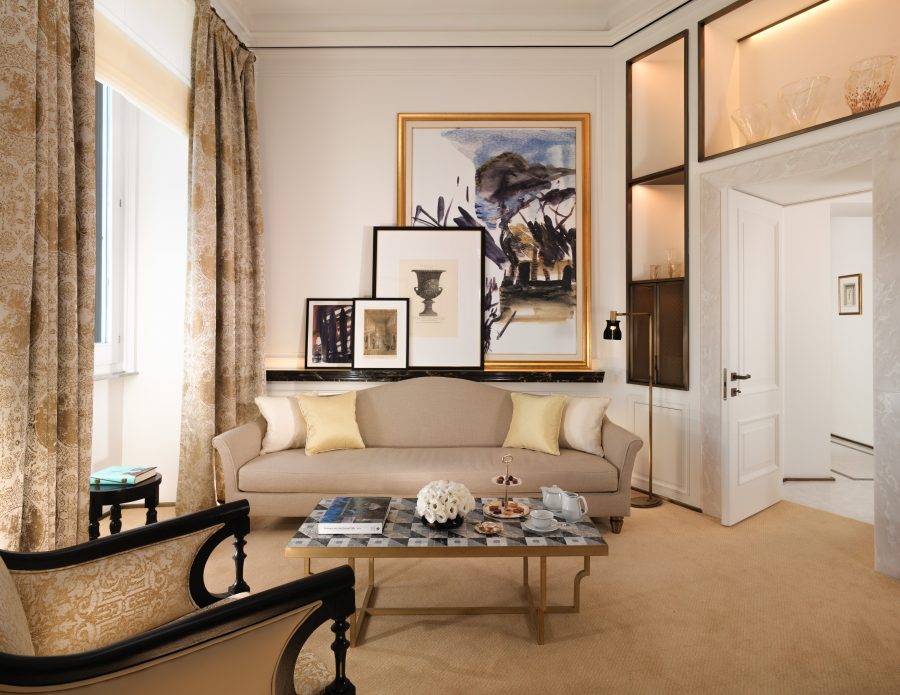 Newly re-opened after a years-long renovation by Paris-based designers Bruno Moinard and Claire Betaille, the Hotel Eden is stunning — lots of gold and ivory–and completely modern. With breathtaking panoramic views from 121 rooms, including of the Borghese Gardens, the property is spacious, sophisticated, and state-of-the art. The rooftop restaurant La Terrazza dell’ Eden is wrapped in floor to ceiling windows, and serves sophisticated Mediterranean cooking from chef Fabio Ciervo. Check out the chef’s table, a private room set just off the kitchen. 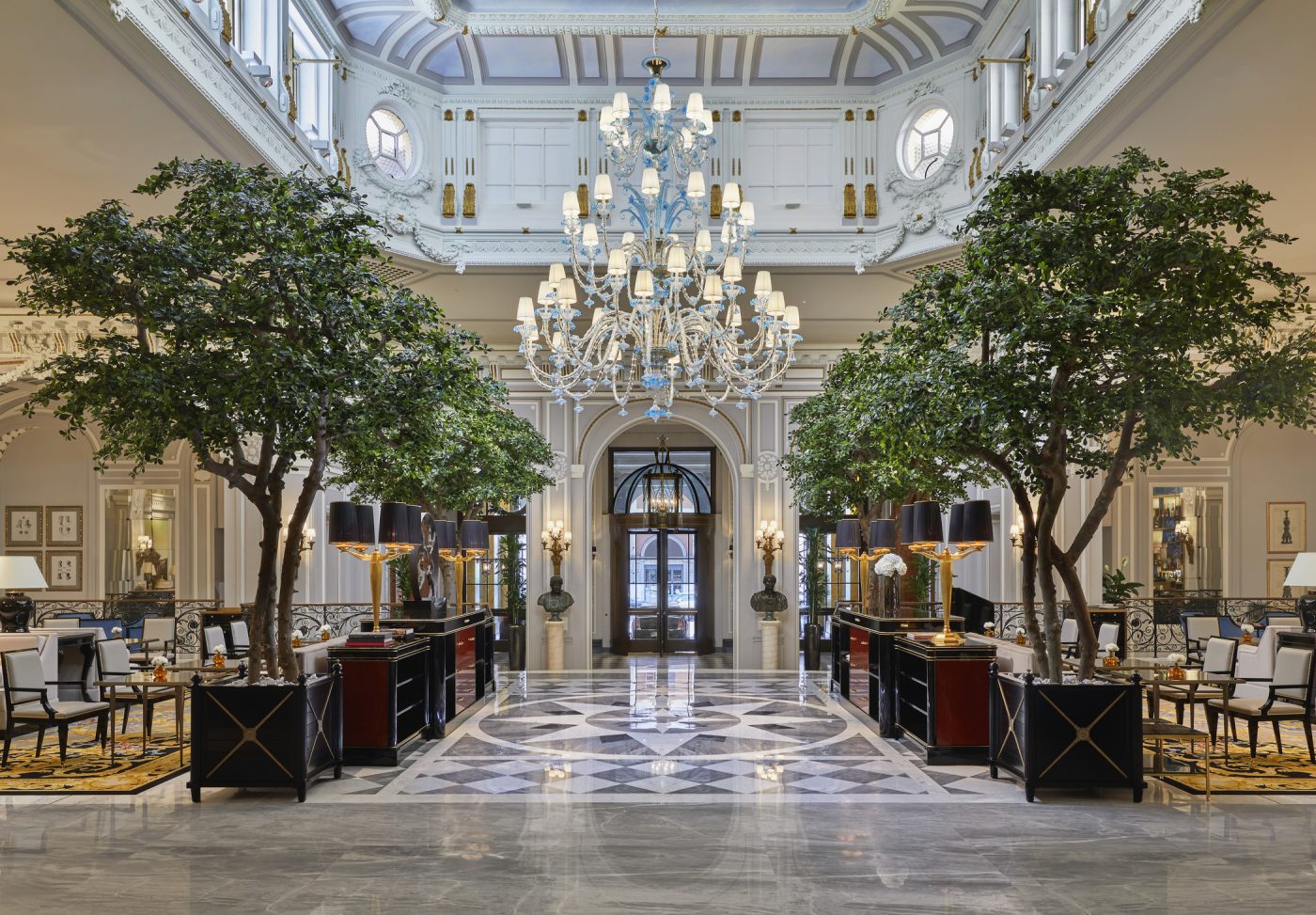 Super World Exclusive! The new lobby of the St Regis

Along with the Hassler, the St. Regis Rome — opened in 1894 as the Grand Hotel — is an icon, a symbol of the golden age of travel at the turn of the last century. This was the era of Cesar Ritz, who opened the Savoy in London a few years earlier, and then came to Rome to open the Grand. (The Paris Ritz came a few years later.) Rome was full of traveling Americans, and this hotel, with its modern conveniences (including plentiful bathrooms, then a rarity) was an immediate sensation. The St. Regis is currently in the midst of a spectacular renovation — the new lobby debuted last year — and remains open for business. According to Maddalena Ciociola from the hotel, “All 160 rooms have been fashioned in tones of cinnamon or powder blue with a combination of Rubelli fabrics and objects d’art.” And she feels confident “food lovers will enjoy discovering the flavors of Mediterranean cuisine at the hotel’s renewed Caelum Bar.”

Once an aristocratic palace, the recently renovated D.O.M describes its aesthetic as “a unique combination of sacredness and luxury.” The 24 suites overlook the Via Giulia, a convenient walk to the Piazza Navona, but still somewhat mercifully away from Rome’s notorious bustling crowds. From fine art to silk carpets, the hotel lets no small luxurious touch go unattended. Guests can relax at the cocktail bar, or choose a book (remember books?) from the hotel’s library to read on the terrace overlooking the historical Roman vista.

Everything you’d expect from Fendi: a beautifully designed, subtly detailed collection of only suites, with, as they are quick to tell you, “exclusive access to the Fendi world.” Which sounds like a magical world, if our opinion counts. The key here is exclusivity. The seven suites are located on the third floor above the Roman Fendi flagship store — Palazzo Fendi — close to the Spanish Steps and Trevi Fountain. Each of the deluxe suites is rendered with a chic, striking aesthetic, and views that span the wondrous city. 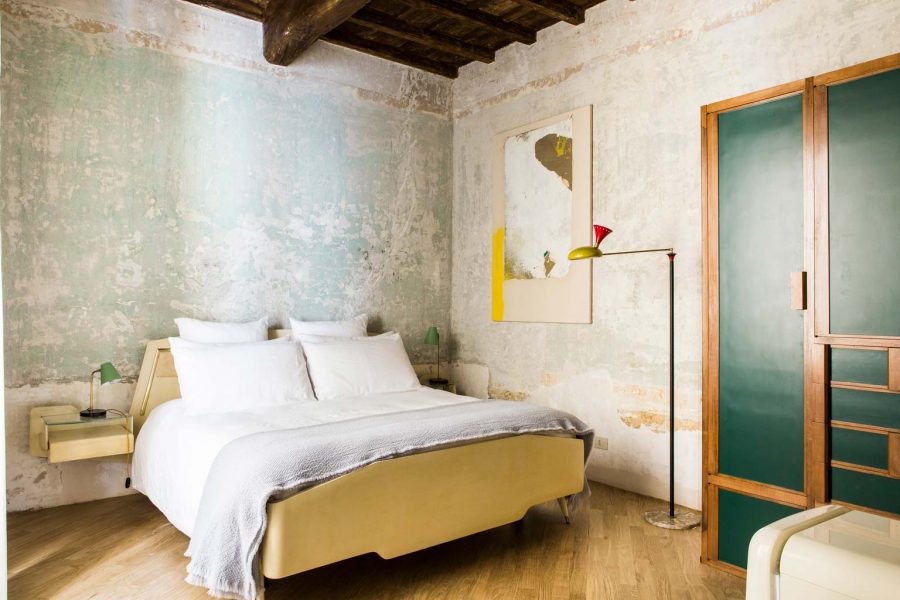 A brilliantly executed design-forward small hotel with ten “Unconventional Luxury Suites,” located near the Piazza Novona. G-Rough’s aesthetic preserves its original 17th Century interior elements as much as possible, including the rough-but-chic patina of the walls. There are five suites and five apartments, all with an impressive blend of style, comfort and refinement, flawlessly done with rich textures and definite flair. The hotel is the brainchild of Emanuele Garosci and Gabriele Salini, who conceive the guest rooms as “living museums” and also suggest and facilitate “unconventional” travel itineraries for guests, including a stop designing your own handbag at the Accademia di Costume e Moda, or an art history tour of underground, archeological Rome. 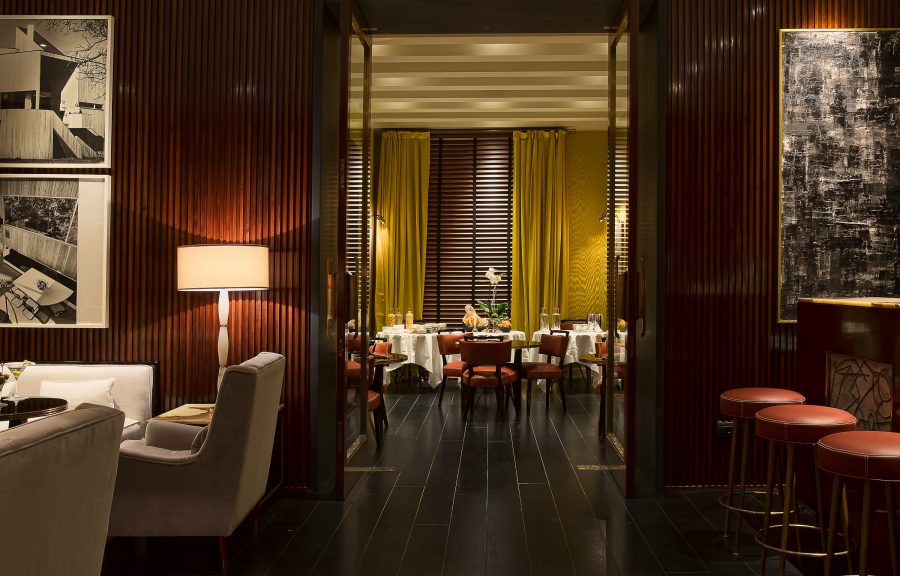 Normally there are lots of people eating here at the JK, and they are very stylish

Possibly the chicest hotel in the city for habitues of the fashion world, JK Place offers 23 rooms and suites (said to have been inspired by Tom Ford’s highly-stylized film A Single Man) in central Rome, not far from the Piazza Borghese. Likely what will first catch your eye when you enter the hotel are the collection of classical statues lining the lobby. Once Rome’s school of architecture, JK Place converted classrooms into some of the most flawlessly designed suites in the city. The restaurant, JK Cafe, is reasonably casual, serving Italian specialties alongside burgers and fries.

This iconic 19th century hotel, popular with aristocrats and Russian czars, has a lush “secret garden” where guests Pablo Picasso and Jean Cocteau once picked oranges and where guests today do the same. The property was closed after World War II but re-opened and re-invented decades later, in 2000, by hotel impresario and scion Rocco Forte. 121 rooms and suites overlook the Piazza del Popolo and reflect the hotel’s commitment to the marriage of interior design with modern architecture, with clean, structured patterns designed by Tommaso Ziffer. The restaurant is spectacular: Le Jardin de Russie is set in the, er, garden and serves chef Fulvio Pierangelini’s classic, much lauded Italian cooking.

BEST HOTELS UNDER 300 EUROS PER NIGHT

The Aleph recently completed an extensive renovation, and reopened this summer in late July. Situated close to the Spanish Steps and overlooking the Tiber river, the new design is sleek, fresh and flawless, with an old-world twist, including hand-painted detailing. The hotel makes a grand and luxurious impression. A choice few of the 96 guest rooms include a panoramic view of the city, and some have terraces, such as the gorgeous Barberini Suite. 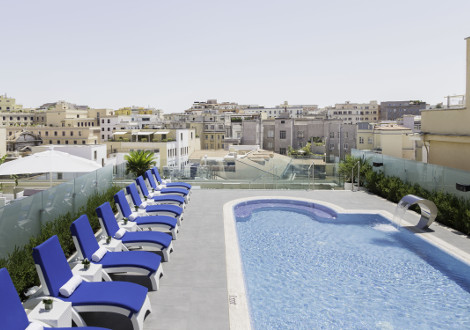 Originally an early 20th century villa, this magnificent art nouveau hotel boasts a rooftop terrace and restaurant which received a Michelin star in 2017. If the eleven super-chic, soundproofed, modern rooms aren’t enough to entice you, the location will, within walking distance of the Colosseum. The style is eclectic, lots of bold wallpapers and high-design furnishings. An old-fashioned telephone booth provides a secret entrance into the popular basement nightclub. How cool is that, eh? Very Get Smart….

If you’re looking to stay right next to the Vatican, the Michelangelo is a good bet. This chic, 179-room hotel combines classic style with contemporary touches. Some rooms look over St. Peter’s Dome, and because it’s so centrally located, the hotel is a short walk from all the major sites. 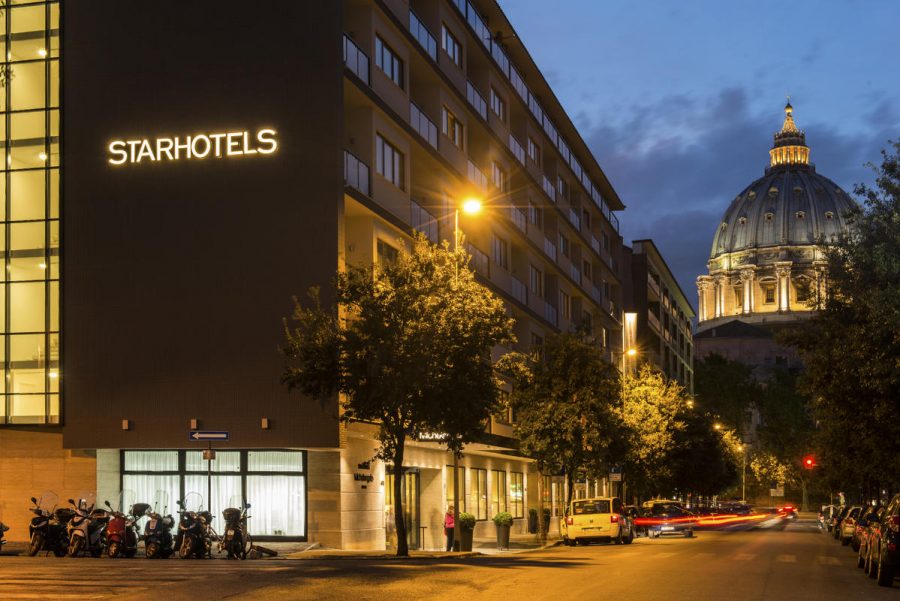 Walk to the Sistine Chapel from the Michelangelo

This centrally located and very large, 232-room hotel has an on-site spa, fitness center, and rooftop pool. Both restaurants — Zest Bar and the gourmet Sette — offer great views of the city. The rooms, though are small. Very small. Multo piccolo. Even the hotel’s medium-sized suites are compact, with (small) terraces that offer views of the train yard opposite. Not a common view, FYI, in its defense. But the prices are very reasonable for the middle of Rome, and you weren’t going to stay in the room all day, were you, so it’s a trade off. 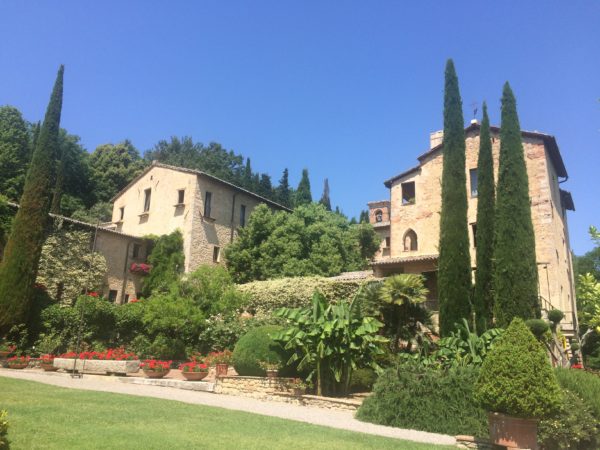