I’m gonna let you in on a little secret, a peek behind the curtain of my “process” as a writer, I am currently sitting in a coffee shop on the East side of Los Angeles writing about coffee houses. In front of me is a perfectly foamed cappuccino, not too hot, just how I like it. The notebook in which I’m writing this article (computers confuse me) is spotted with stains from cappuccinos past. The place is packed with other, more computer capable writers; some are working on screenplays; others spend way too much time on Facebook. That’s the setting. I’m drinking coffee while writing about coffee. My favorite coffee places in the country, to be specific. And I’m getting paid to do it. They say do what you love and all that Jazz. I guess I’m just #blessed.

If Seattle is the Big Bang of third wave coffee, then Caffé Vita just may be the God Particle (I think that analogy works. I’m no scientist). Founded in the affluent Queen Anne Hill neighborhood back in the go-go 90s, Caffé Vita was an early adapter of bypassing the fair trade coffee process, opting to develop relationships with coffee farmers directly.

The move has been a fortuitous one: there are now half a dozen Vitas spread across the state of Washington, plus two in Portland, one in LA, and now with expansion spreading to Brooklyn. All of this means Vita has outlived Grunge music as that quintessential Seattle export.

Yeah Me Too Columbus, OH

Born out of the ashes of tragedy, former members of punk band and local heroes Gaunt opened YM2 after the death of frontman Jerry Wick. They even named the store after one of the bands albums. Both the coffee and the album are masterpieces. This tiny storefront is nestled in the cozy, but quickly gentrifying Clintonville neighborhood. Blink and you’ll miss it. Luckily they have strong coffee to order so not blinking won’t be an issue. Store owners Sam Brown and Jovan Karcic are usually the gents behind the counter, unless they’re on tour with one of their newer musical projects.

Time for a hot take, folks: forget Cafe Du Monde. Tourist trap all the way. Unless, of course, you happen to enjoy being pegged that way. People who know the Big Easy Get their AM jolt from Morning Call. In operation since 1870, MC has seen its share of legal issues over the past couple years, including a fight to remain in their City Park location. Bureaucracy be damned! This is still the best place in the Crescent City for beignets and coffee with steamed milk.

Scientific in nature and minimalist in design, Heart Coffee in Portland, started by Finnish snowboarder Wille Yli-Luoma, points towards the future of coffee houses. Even the New York Times has taken notice, calling Heart “advanced coffee”. Apparently in the future there’s no such thing as iced coffee. Yli-Luoma believes cold coffee is offensive to the integrity of the beans. Seems strict, but I trust his opinion. The future is now, and it’s piping hot.

There’s no brick and mortar to point you to here. Not yet, at least. Instead you can find Marcus Rocchio setting up shop at the Westchester Farmers Market every Sunday, serving up his single origin, charcoal roasted blends, such as the Ethiopian Sidamo. The charcoal method allows for a richer, less bitter flavor. Like the opposite of divorce! Also unlike divorce, this is a coffee you’ll want to experience again and again. In this day and age of secretly corporate artisan coffee, it’s important to single out the true DIY-ers. Rocchio is as good as they come.

Slowly and steadily taking over the Austin coffee scene, Epoch now runs five different locations in the Texas capital. But there’s more to enjoy than just a cup of Joe here: you can really pack on the pounds at Epoch with their assortment of pastries, cakes, sandwiches, and they even serve pizza! Pro tip: pair your Mexican Latte with a pumpkin muffin. It’s like celebrating Halloween and Dia de Los Muertes in one single bite.

Intelligentsia is a Chicago tradition as much as deep-dish pizza, unrelentingly cold winters and a Bears losing season. Okay, that last one was a cheap shot, but if you find yourself stuck in the Windy City during a December blizzard, hop on the back of a snowplow and get yourself to the Loop for a hot latte. Founders Doug Zell and Emily Mange are often credited with starting the whole third wave coffee revolution. Their Millennium Park location, with its post-industrial milieu, is coffee Mecca. They’ve been at the top of the coffee game for many seasons now, now if only they could help the Bears pick a quarterback.

Sometime back in 2008, two friends were discussing their shared love of artisan coffee, and the lack thereabouts of such high quality java in their hometown. This meeting of the minds soon gave birth to the best roasters in West Michigan. Their most famous blend is the Oktoberfest. With beans hailing from Costa Rica, Ethiopia, and Santa Lucia, this crisp and citrusy blend is the perfect antidote to those harsh North Coast winters.

Formerly known as Black Tap Coffee, this Charleston favorite harvests their beans from a nearby island, which is about as “Support Local” as you can get. An absolute must have is the Black Julep: a shot of espresso, dollop of honey, and crushed mint over ice. The perfect drink to sip while walking cobbled streets, marveling at how one small city can house some many amazing restaurants. Who knows, you might even spot Bill Murray moseying about.

If you’ve spent any time scrolling through Instagram while in the Big Apple then you’ve definitely seen posts of the exquisite interior of Maman. This place seems made for social media. Fortunately their coffee game is on point too. With multiple locations across manhattan and Brooklyn, this coffee house specializes in baked goods and desserts. Oprah even called their chocolate chip cookie one of her all-time “favorite desserts”. My life motto is “if it’s good enough for Oprah, then by gum it’s good enough for me”. That goes double for free cars.

Chef Josh Dalton came in from the cold, to the Big City where he makes everyone happy 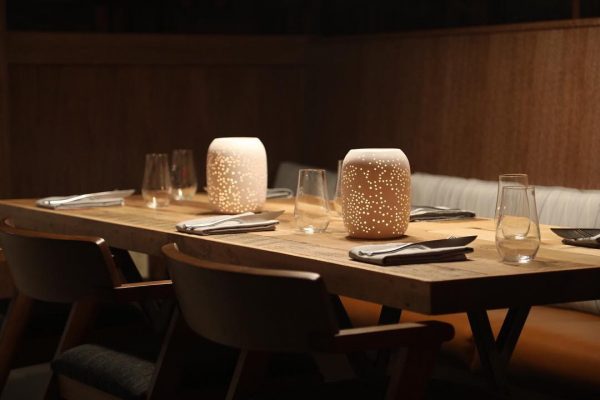