In the Emerald City, an overcast drizzly afternoon offers an excuse to drink something hot while enjoying a good book or conversation in the perfect setting, a cozy café.

As a person born and raised there, I’m in my element in such weather, although contrary to what most people may think, it actually doesn’t rain non-stop — Seattle ranks 44th among major U.S. cities in average annual rainfall.

Starbucks may be the king of coffee, especially here, where it started and has a standard shop on pretty much every corner, but the coffee culture has taken a delightful twist in focusing on specialty coffee and drinks which allow local roasters to shine and share their creativity.

Here are four of my favorite funky and fabulous cafés:

Located in the heart of Pike Place Market on the corner of Stewart and Pike Place, Local Color is a welcoming haven from the bustle. Part café and part art gallery, the shop offers walls filled with original art by local artists, rotating the collection every sixty days. In the summer the front doors open up to the sidewalk, letting in the unique and competing sounds of the street musicians and seagulls. The cafe serves up fabulous gourmet brewed coffee and pastries, sandwiches, beer and wine.

Every coffee order is individually ground for the freshest serving possible. My favorite is the rich and spicy Aztec Latte with almond milk.

This gem is found underneath the main entrance of Pike Place Market, just before the famous Gum Wall — which is exactly what it sounds like: a wall covered in chewed gum — and below where the fishmongers throw fish through the air. Ghost Alley Espresso is one of the oldest spaces in the market. Measuring only 147 square feet, you can cozy up to one of the few stools inside or, if you’re lucky enough to snag one of the outside chairs, choose to people watch.

It was once an attendant’s room for the first public restrooms on the west coast, originally built for the 1908 World’s Fair. The owner, Mercedes Carrabba, remodeled it by closing off the entrance to the men’s room (smart, atmosphere-wise) and turning the attendant’s space into a coffee shop. The original restroom tiles are still on the floor.

At one time Ghost Alley was the meeting place for Market Ghost Tours, which Mercedes operated for 13 years. She chose the name for her tiny cafe to pay homage to the hauntings in the area. She closed the ghost tours in 2016 and began roasting her own coffee in 2017, with her husband and son, on Queen Anne Hill in the back of her husband Rafael’s violin shop, using a tiny five-pound roaster. “It’s pretty awesome, to smell the varnish of the shop and the coffee mixed together.”

No drip coffee is served here; it’s all espresso and tea. Queen Anne Roasters feature Single origins and blends available by the bag at the shop, where everything on the shelves has been roasted in the past two weeks.

Besides amazing espresso, their signature drinks are to die for. My favorites: 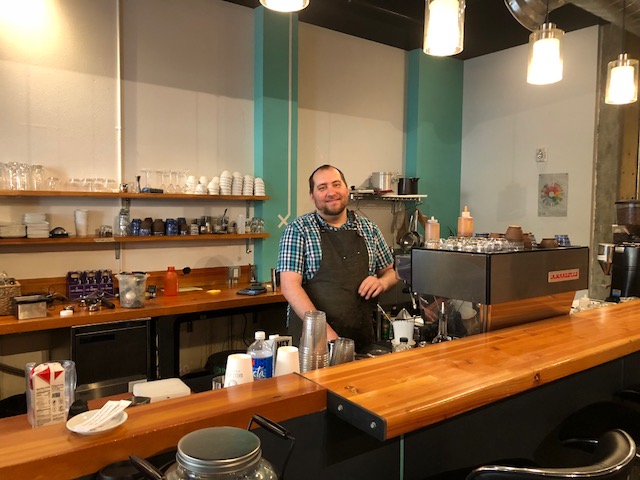 Aimee Morrow, the owner of Soulever Chocolates at Northwest Tastings in Pike Place Market, told me about Ghost Note Cafe as I was nibbling on dairy-free chocolate and sipping local wine. “They have incredibly creative coffee drinks there, and the owner is super cool!” 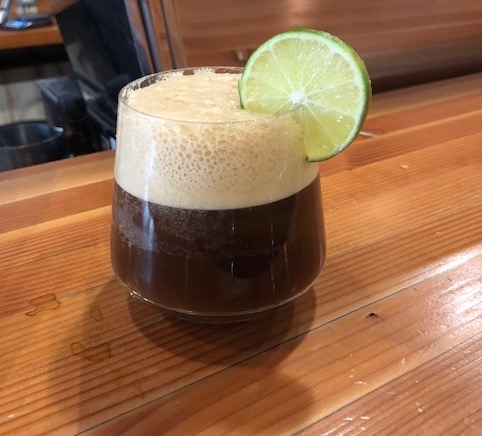 It was a Monday afternoon, and I set out on foot up Pike Street to Capitol Hill. Ghost Note is best described as a modern progressive café, which offers in-house ingredients, seasonal drinks, unique teas, pastries and toasts. They even carry some vegan sweets.

I arrived just in time to be served. Mondays, they close at 4:00 p.m. The owner, Christos Andrews, was behind the counter and explained he was the creative force behind the innovative coffee concoctions. Some of the specialty drinks include:

Just for fun, I’ll include a “coffee hut,” tended by a scantily clad “bikini barista.” Seattle is at the forefront of the bikini barista phenomena that is sweeping across the country.

I visited a bright blue one in Edgewood (about 25 miles south of Seattle) called Perk U Licious. Bubbly 22-year-old Cassie, the barista on duty, was happy to chat with me about the “perks” of her job. “It’s a lot of fun,” she explained as she made me a double espresso. “And the money is great! Good tips!”

When I asked her if she was in school, or planning to do anything else, she said no, “I just love working in coffee!”

I inquired about the behavior of her male clients and if she ever felt uncomfortable or in danger, since there had been a rape attempt by a man who climbed through the window at Hottie Shots Espresso in Kent, Washington, but she assured me that her customers were respectful for the most part and she enjoyed chatting with them.

To find a bikini barista anywhere in Washington State, since you asked, check bikini-baristas.com.

A similar theme in South America is called Café con piernas (Spanish for “coffee with legs“) which is particularly popular in Santiago, Chile. Young women dressed in mini skirts and high heels cater mostly — surprise, surprise — to businessmen. A jolt of caffeine and some visual inspiration can apparently do wonders for productivity and morale! 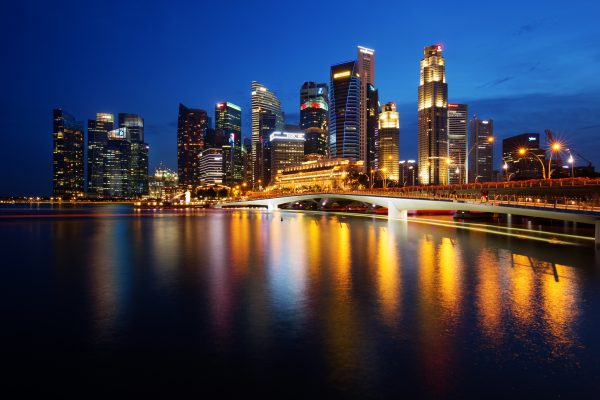