Starting as a group of only 8 properties in France in 1954, banding together to espouse and promote a certain kind of culinary and hospitality tradition, Relais & Châteaux has grown to a collection of over 450 independent, and in a particularly prescribed way special, hotels and a further 80 or so restaurants, across 64 countries. Concentrating on both a luxurious stay and gourmet food, these often historic landmark venues include castles, manor houses, wineries and estates in mostly idyllic settings.

They are, to say the least, an eclectic collection. To become part of it, an establishment has to pass a whopping 300 criteria, and be approved through a quality department in Paris and then voted on by a board of directors. And you can’t buy your way in, which distinguishes it from some other hotel amalgamations.

So, here in the land of their origin, are the 10 best in France…. 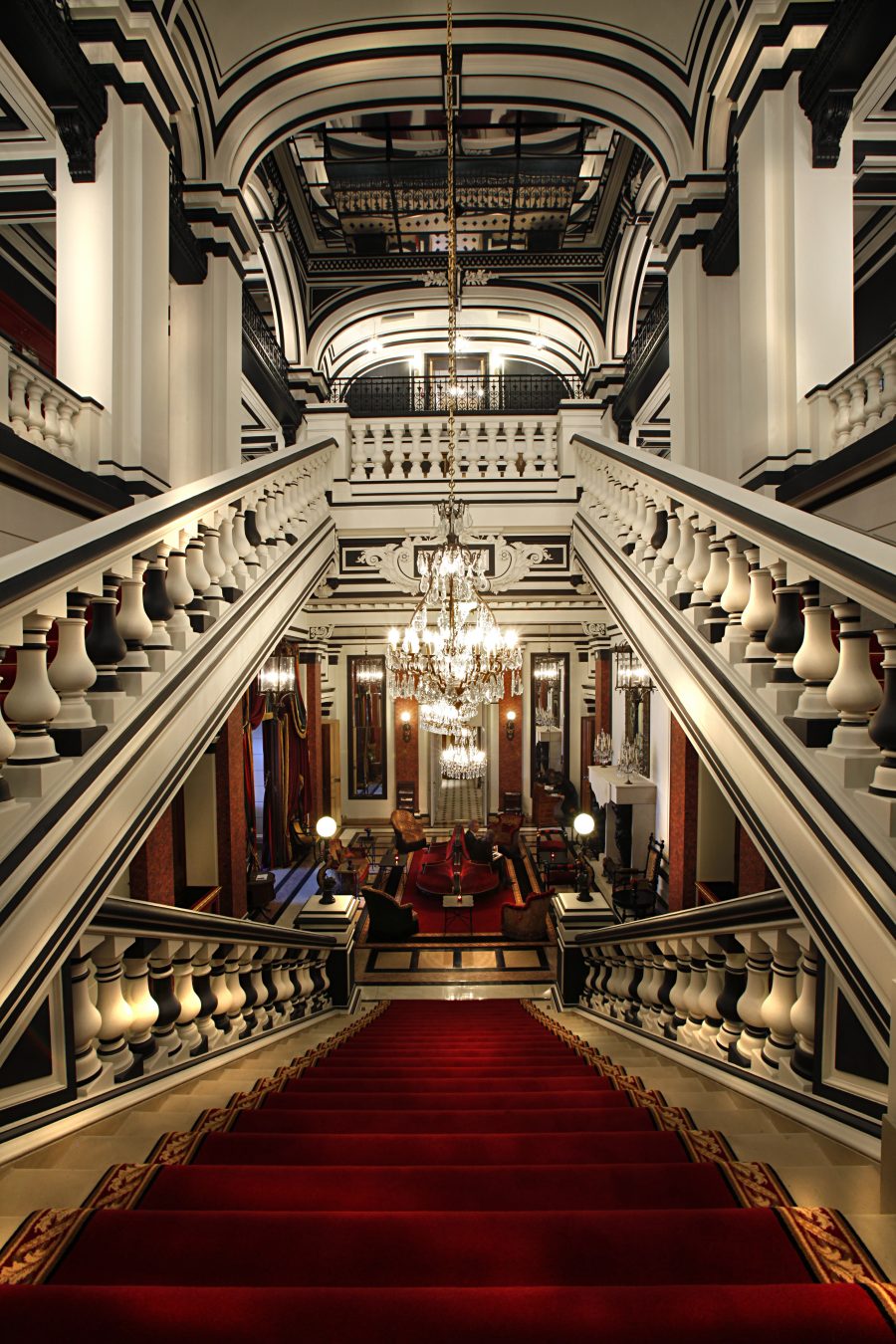 Smack dab center in the City of Light, bring out your inner Boheme in this sumptuous heaven in the chic and prestigious 16th arrondissement. A 15-minute stroll takes you to The Champs Elysées, L’Arc de Triomphe and the boutiques of Victor Hugo. But you could be a thousand miles, and a hundred years away.  The original 19th century residence was built on Paris’ first airfield, and is the only chateau-hotel in Paris. Lavishly redesigned since 2010 by the eclectic Bambi Sloan— it boasts a Maison Guerlain spa, a Turkish Hamam (Turkish steambath, to save you looking it up), car services — nothing to scoff at in Paris — and access to an 18-hole golf course. If you can pull yourself away from your dedicated sommelier, or from zipping around the grounds in your borrowed electric car, you can hang at the prestigious St James Club next door. 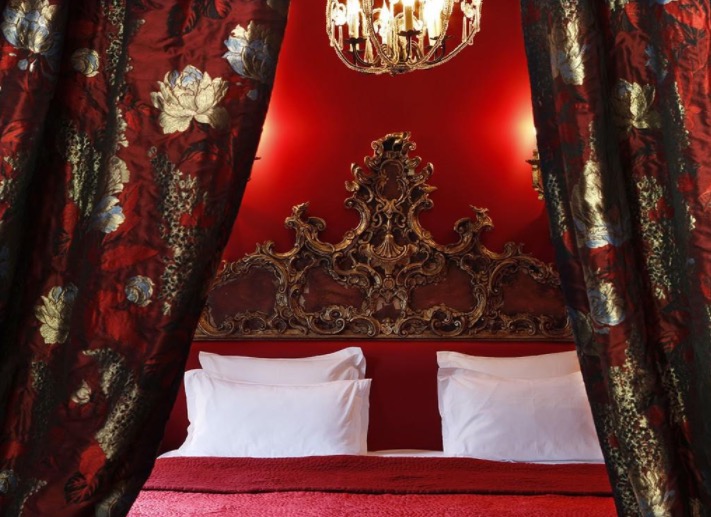 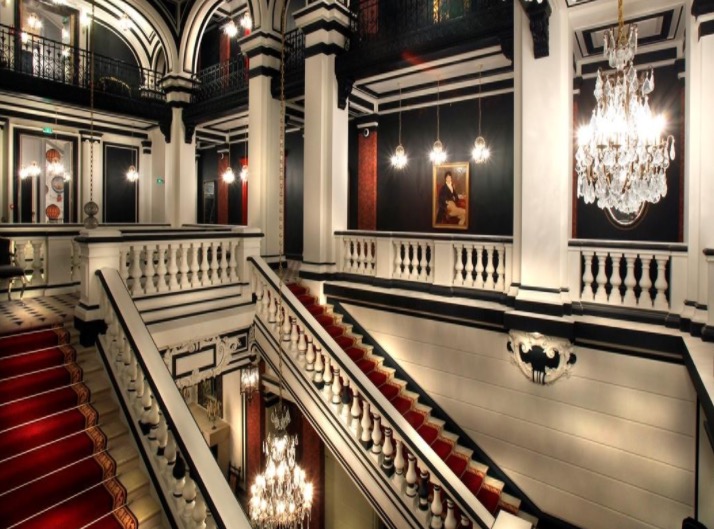 “Make no mistake: behind each of the identical glossy red doors, lies a unique décor”, says the hotel about itself.

$1500 for an independent house on three floors. Your home away from home in Paris! 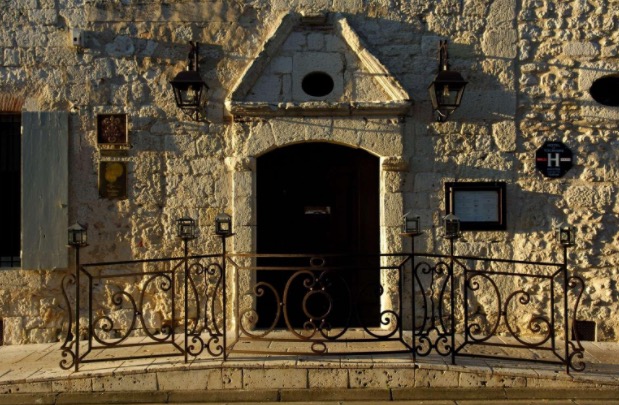 Meanwhile in a village in the south west of France….  Baroque tranquility, and astonishing food awaits through the understated doors of this 13th century country house. Exquisite, secluded, it is surrounded by a valley of sunflowers and wheat fields. This one time residence of the Count of Toulouse offers an intimate 10 rooms and has been owned since 1978 by multi-starred, award winning chef Michel Trama, who, lucky for us, bailed on his original career idea of scuba diving with Captain Cousteau. 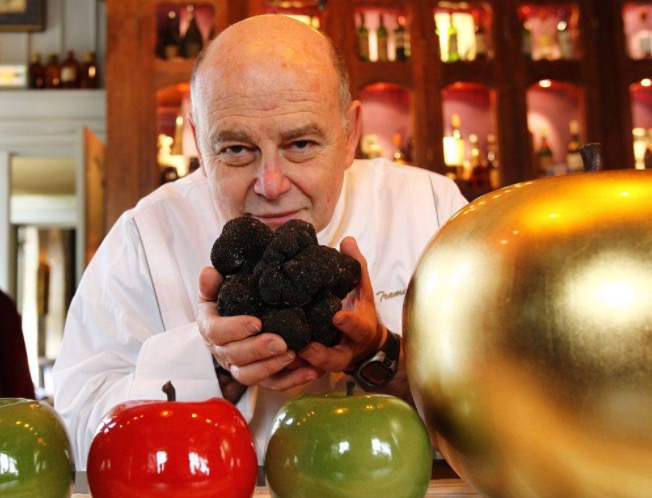 He is now known for expertly using the finest delicacies, like Perigord black truffles, Petrossian caviar, Blue Brittain lobster and Valrhona chocolate, the secrets of such use he will gladly share with you if you sign up for his cooking classes.

Fly into Toulouse or Bordeaux, or take the scenic TGV (the fast train) from Paris to Agen station, appx 9 miles from the hotel. There are also 3 daily flights from Paris by Air France owned ‘Hop!’ — “Hop from Here to Here” is the company slogan. It takes an hour and 5 minutes from Paris Orly to fly to Bordeaux. A nice hop. 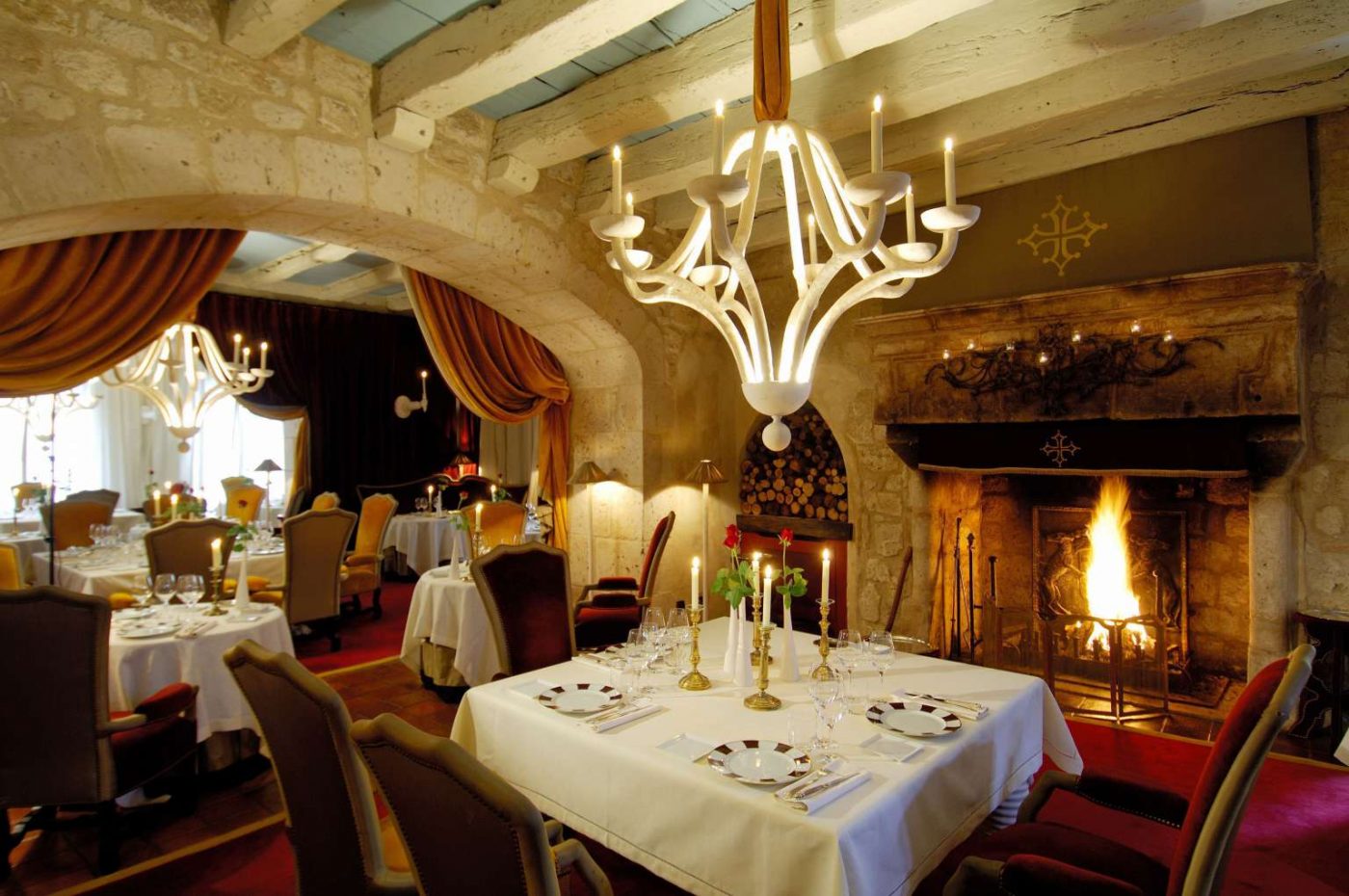 9 gorgeous rooms and 1 suite starting around $260 per night.

They also have 2-4 people apartments opposite the hotel from around $129 per night – seems a great deal! 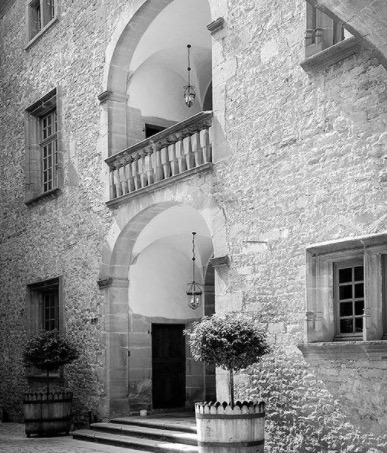 Built over several centuries, and in the heart of the Beaujolais wine region, Chateau de Bagnols stands stoically in honey colored stone, complete with moat and drawbridge. (We like that — maybe they can lock us in and throw away the key….)

Activities include cookery courses, wine tasting bien sur, golf and tennis. You can retreat to the Royal Relaxing spa, indulge in a hot stone massage, a Hamam; a style of detox ritual, where you’re heated and scrubbed, wrapped in algae mud, covered in oil and carried away in a metaphorical bucket. You’ll find yourself as relaxed as a jellyfish as you head back to your 17th century frescoed room to prepare for dinner, where chef Jean-Alexandre Ouaratta will prepare divinely inspired dishes whilst you sit in the transcendent, centuries old décor. And you sure will sleep well. 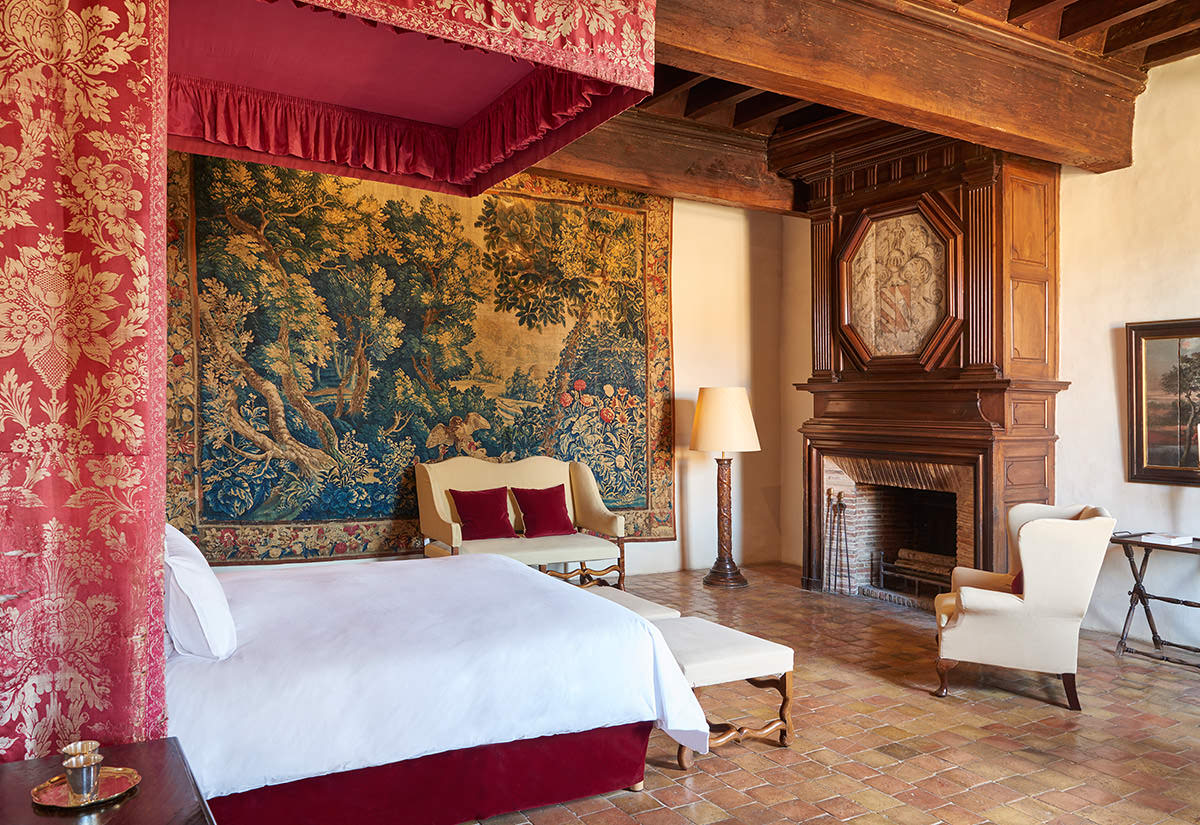 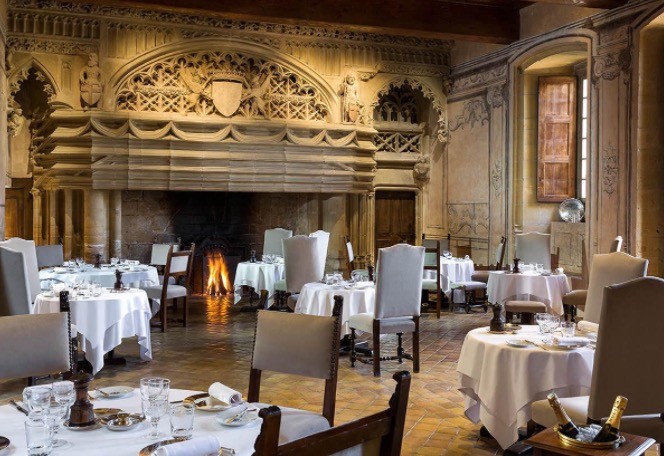 The namesake Restaurant 1217 the year the castle began

A variety of accommodation options from Chateau to modernistic or stay in beautifully renovated outbuildings with stone fireplaces. 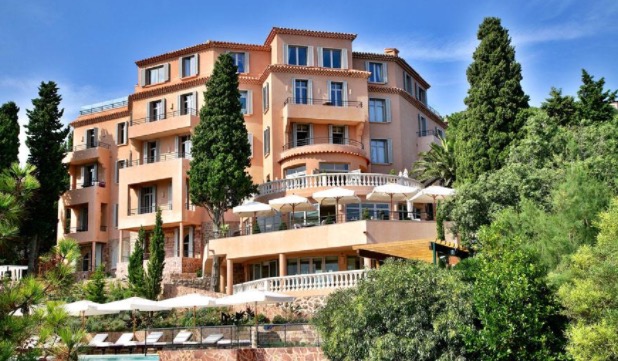 Overlooking the Mediterranean and designed with a north African influence in mind, you may think you’re in Marrakech. Located between St Tropez and Cannes and hidden off a winding road just 15 minutes from La Croisette, is the extraordinary oasis that is Tiara Yaktsa. An ideal location for festivals and shopping.

Starting his career straight out of school at the age of 15 and transplanted from the famed Eden Roc Hotel located in Cap d’Antibes not so far away, Executive Chef, Guillaume Anor, will sumptuously titillate your taste buds in the hotel restaurant, L’Or Bleu. 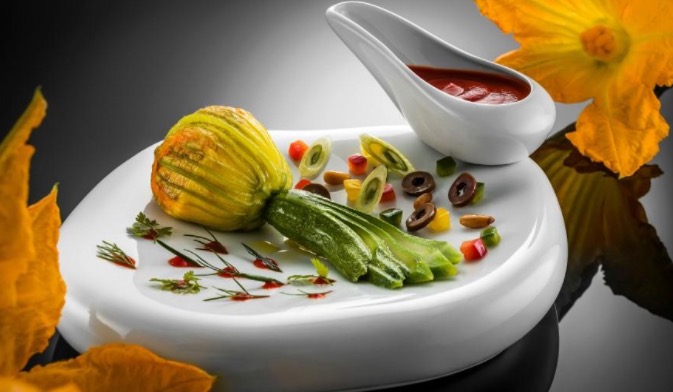 A short stroll from the hotel is the Tiara Spa at the 5 star Tiara Miramar Beach Hotel (not a Relais and Chateaux property) where you can access the private beach because it’s still a Tiara offshoot. Be luxuriated with Sothys exclusive signature body products whilst rediscovering your inner peace. Yes, it has a private beach! 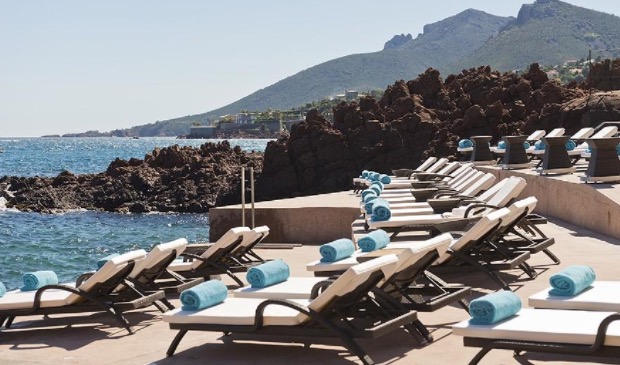 For wine aficionados. You can arrange for your helicopter — or someone else’s helicopter, whatever — to land in front of this 17th century Chateau in The Medoc region, within strolling distance to the village of Bages, where wine, history and culture meet, and the Château Cordeillan-Bages has a collection of over 1500 fine wines, and was, appropriately, recognized as one of top 10 wine lists in France this year in the French magazine Terre de Vins. It’s a gastronomic mecca and where the immortal Lynch-Bages Pauillac comes from.

The wine cellar’s adjacent tasting room with connecting garden terrace can be used for small gatherings, meetings, or simply for a private meal overlooking the vineyards and the turrets of the chartreuse (charter house) where the wine was originally made. Not to be confused with the luminescent herbal green stuff made by Carthusian monks in Grenoble 400 miles away. You’re not confused are you?

The rooms have been modernized, so you won’t find frescoes on your walls. But then you’re probably not here to stare at the walls, right? (And if you are, well, Mazal tov!) 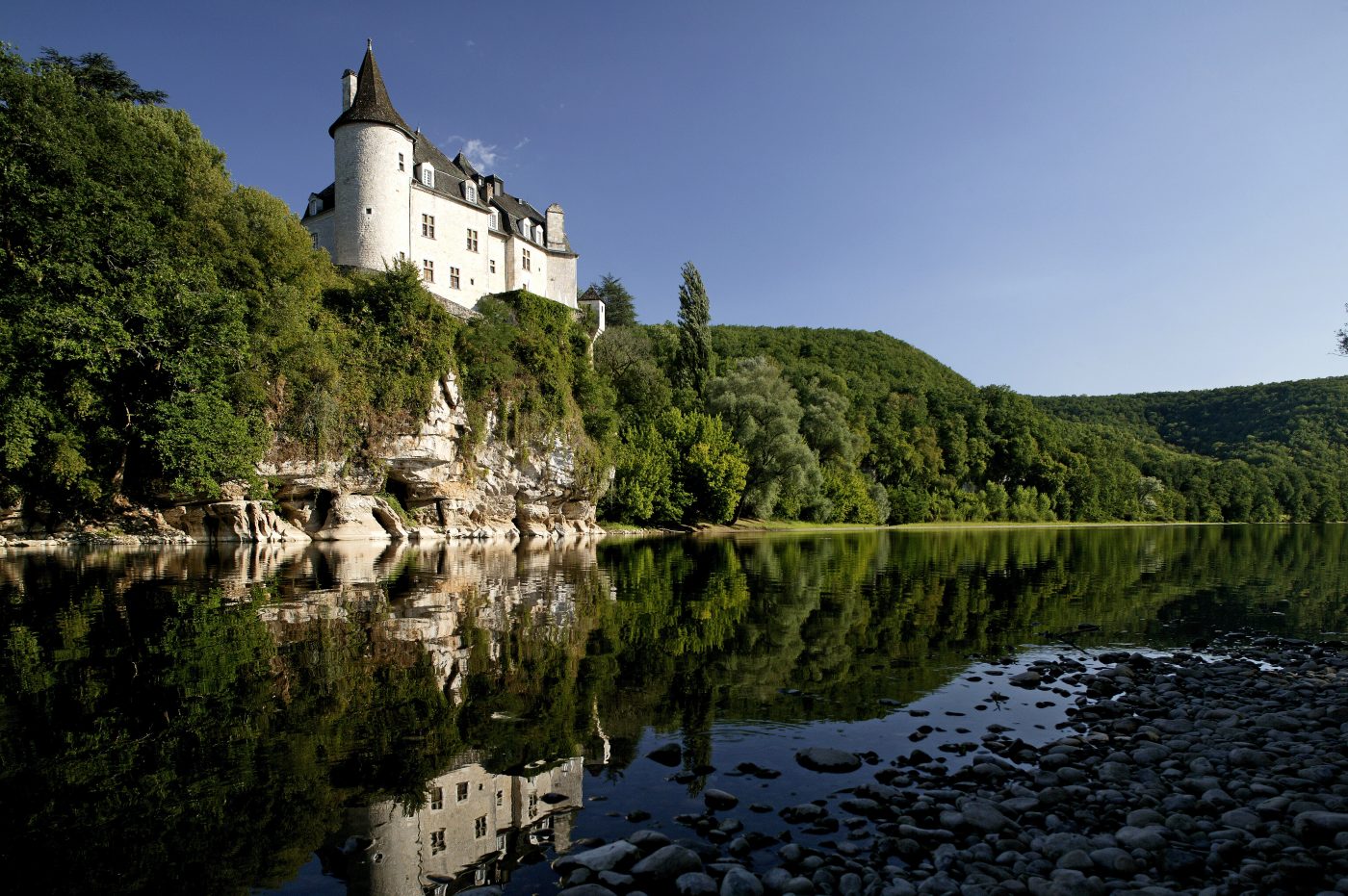 On the Dordogne River. Enjoy stunning views of the Dordogne from a four-poster bed in this 14th century historical masterpiece, whilst dreamily dipping toast fingers into your soft-boiled oeuf a la coque. Surrounded by forest and bequeathed with long ornate gardens and trails, this castle inspires a sense of childlike wonder with its ancient stone stairwells, grandiose fireplaces and chandeliers, and a glorious outdoor dining terrace.

River activities include water-skiing, paragliding and kayaking. There’s a pool if you just want to be, and absorb. Or get lifted up, up and away in a hot air balloon ride. There’s tennis and horse riding too. Did I mention the food is sublime..? 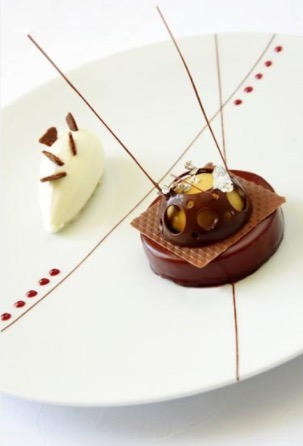 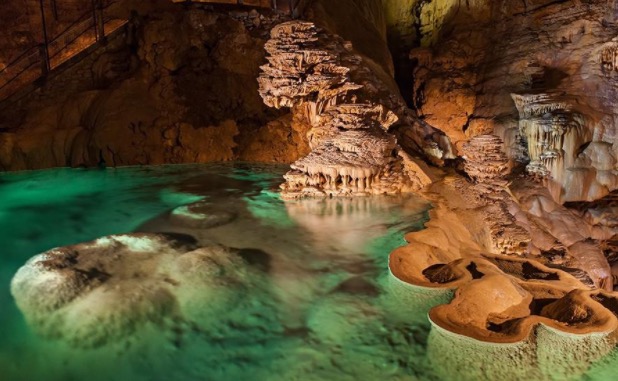 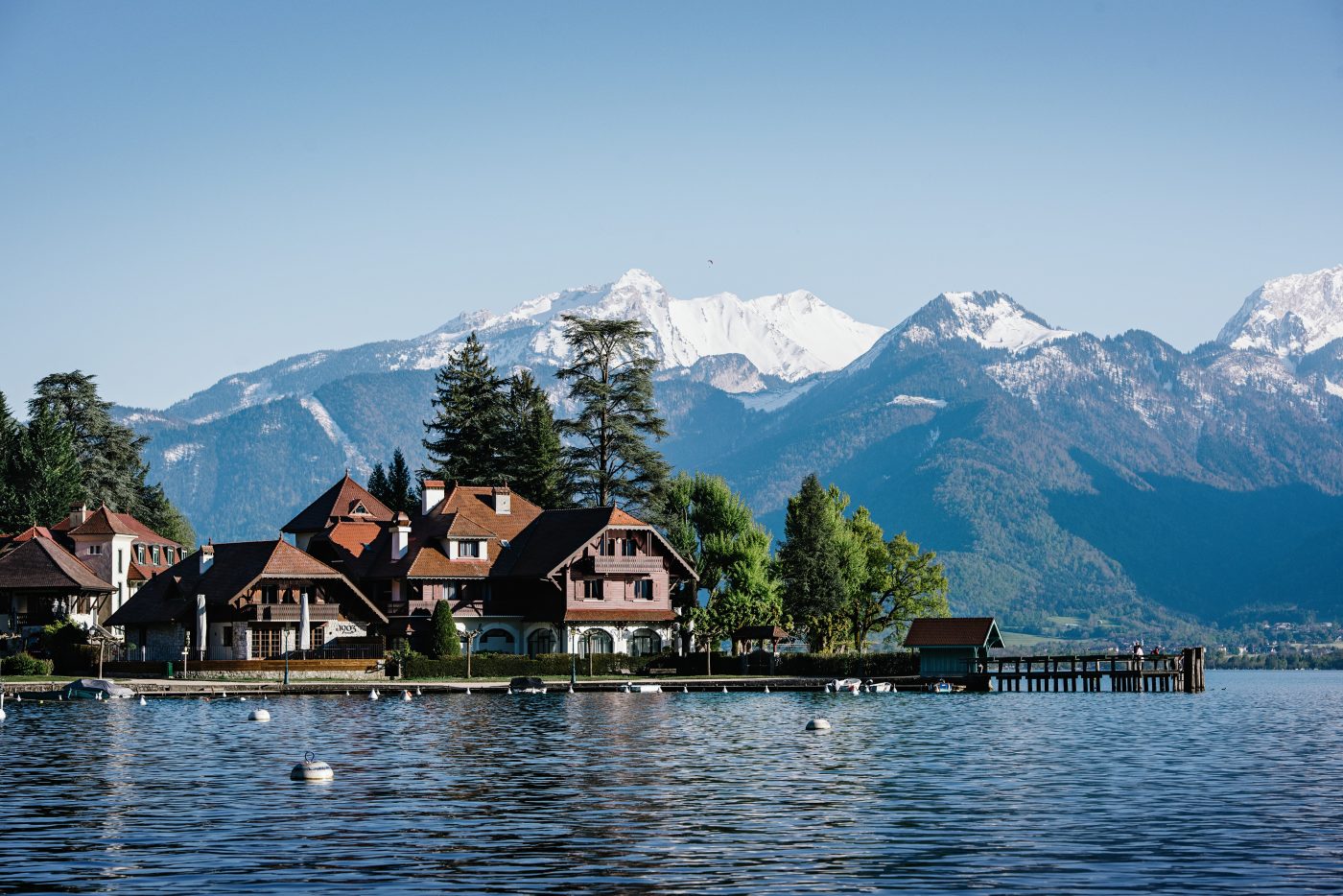 On Lake Annecy in the Haute-Savoie region, the just updated Auberge du Pere Bise is embarking upon a new chapter under owner-chef Jean Suplice and wife Magali. 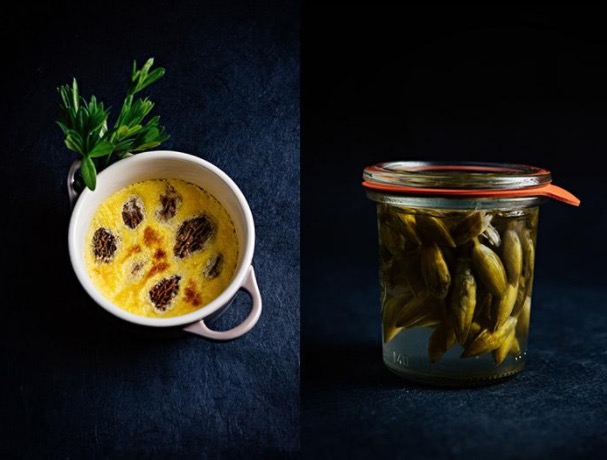 Appx 35 miles from Geneva airport, or 7 miles from the local airport and train station in Annecy. Things to do close by: Visit the 11th century Benedictine Abbey, The Castle of Menton, St Bernard, or the plateau of Glières, the mecca of the French Resistance. (There are many excursions to explore the plateau and trails).

There are water sports to plan for summer or quieter fall days, or skiing in the winter. If that’s too much to handle you can always laze next to the lake all day, nurtured by the mountains all around. We at WONDERLUST like lazing around, FYI. 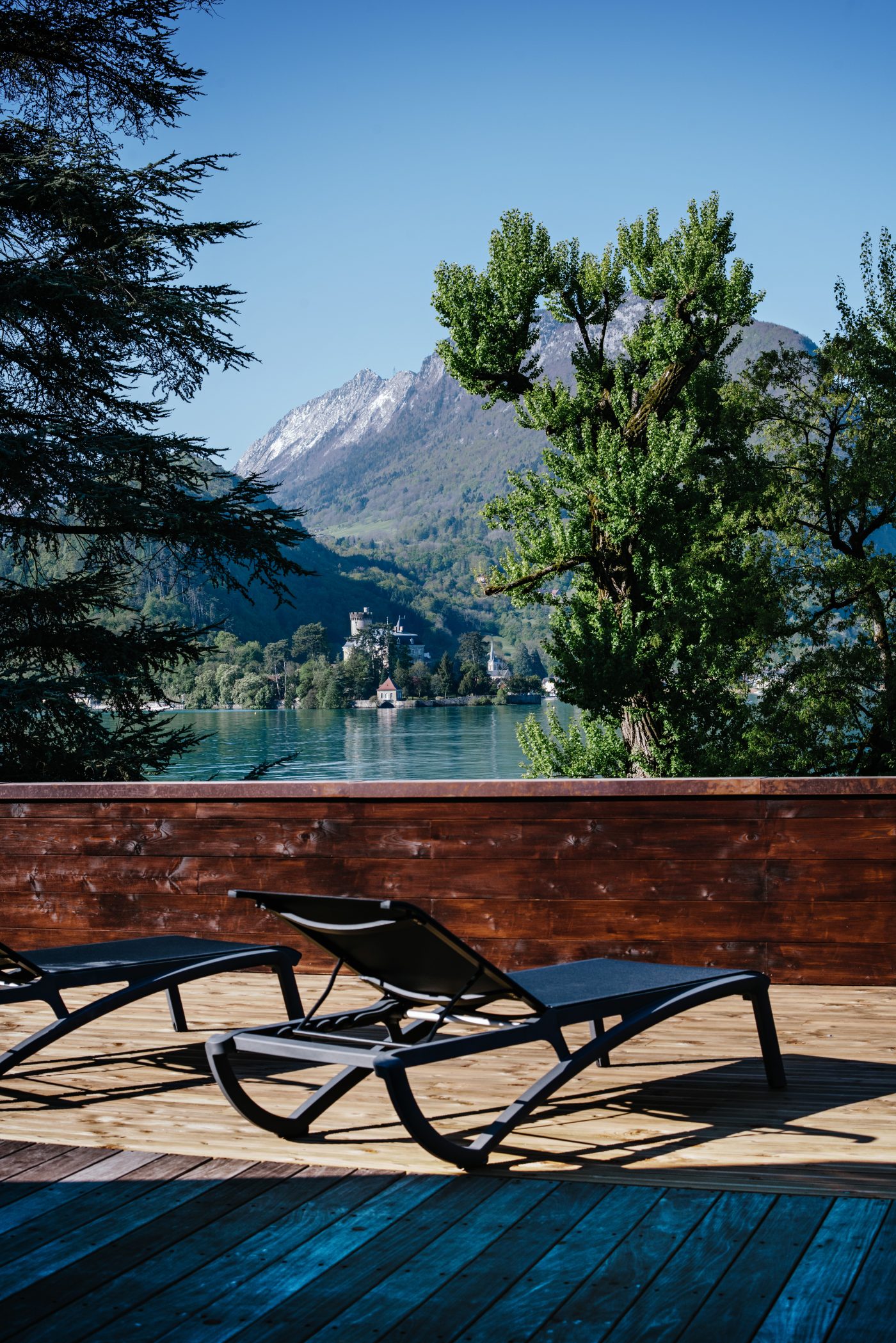 23 rooms and suites, a gastronomic restaurant, bistro and delicatessen.

From $425 per night in September 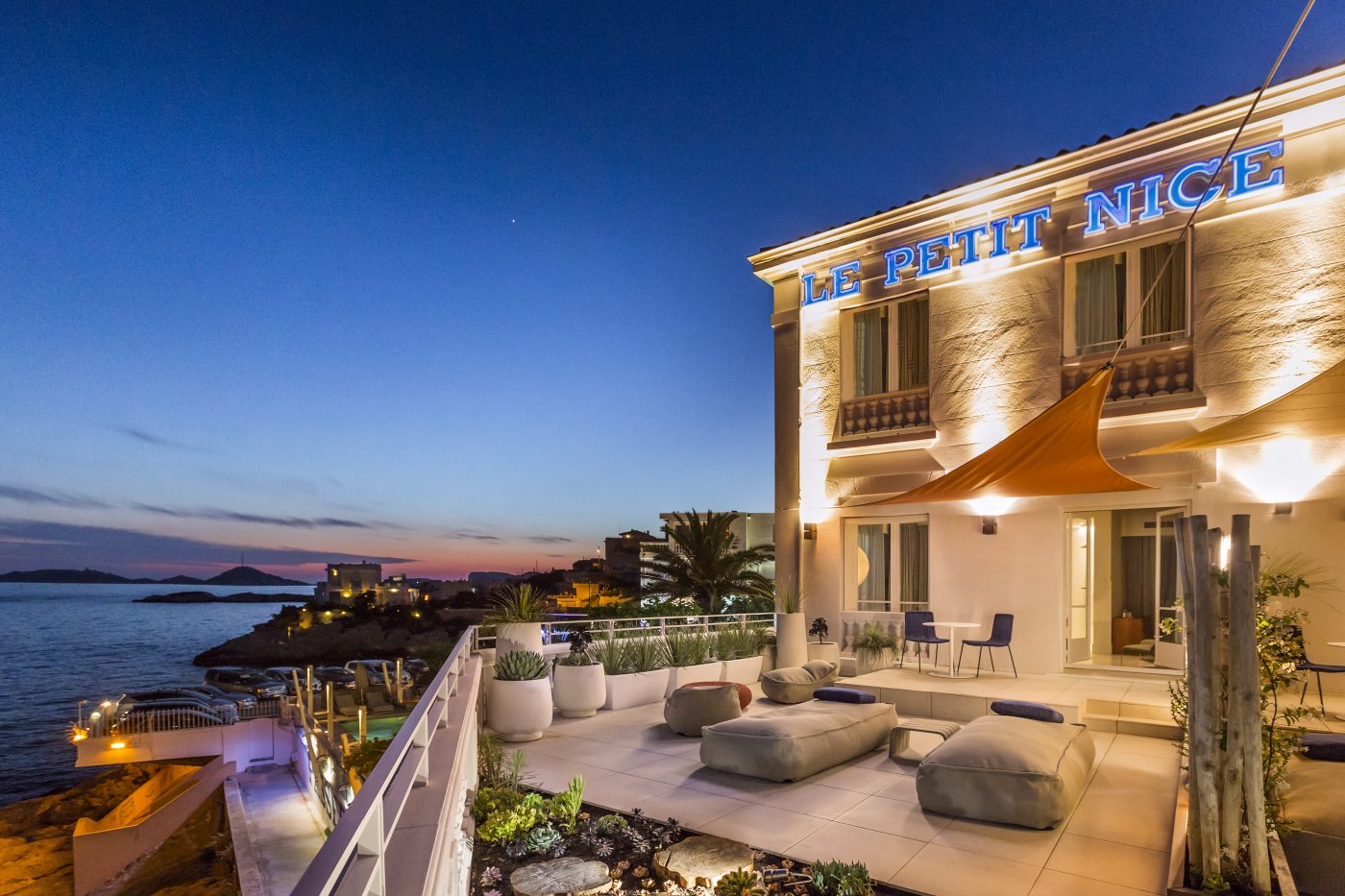 About 2 miles outside of Marseilles and now owned by French chef Gerald Passedat, this year the hotel marks its centenary. The restaurant specializes in 65 varieties of Mediterranean fish and bouillabaisse, an extraordinary range even for a legendary port town. Sea views abound, from the terrace, from the restaurant and from spacious bedrooms overlooking the horizon.

Monsieur Passedat claims his skills are comparable to culinary radicalism.  He does make black abyss chocolate, which he will teach in his cooking school. They do that too. 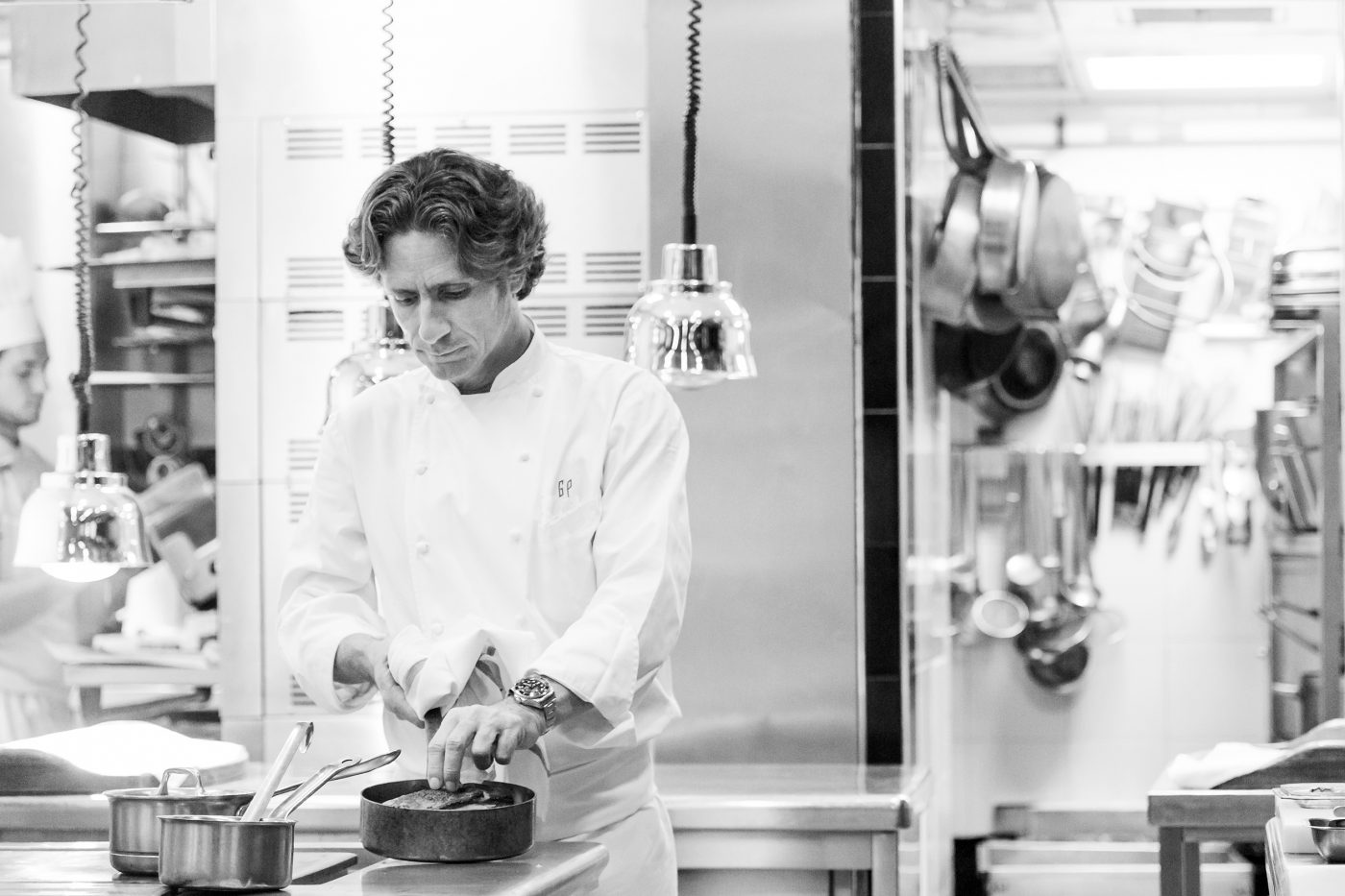 A saltwater pool and 16 rooms

Rooms from around $320 per night 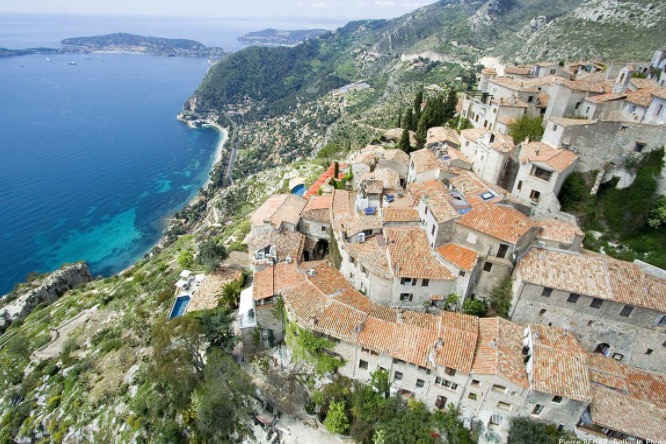 Eze is a Medieval cliffside village overlooking The Med (We do love the Medi in summer). First populated around 2000 BC.  Walk through the cobblestone streets and be awestruck at the breathtaking view.

This area of France, so close to Nice, was originally a part of the Principality of Monaco. There are four restaurants at the Chevre D’Or, which by the way means The Golden Goat:  The gourmet one, two Mediterranean eateries and the relaxation restaurant.

Lavishly decorated and overlooking the bay, the property offers Indian massages, an outdoor sea-view Jacuzzi to go with a cocktail, a saltwater pool and heli-tours to Cannes, St. Tropez and Portofino, Italy.

The rooms and suites are exquisite and aired by Mediterranean breezes.

September rates from appx $650 per night 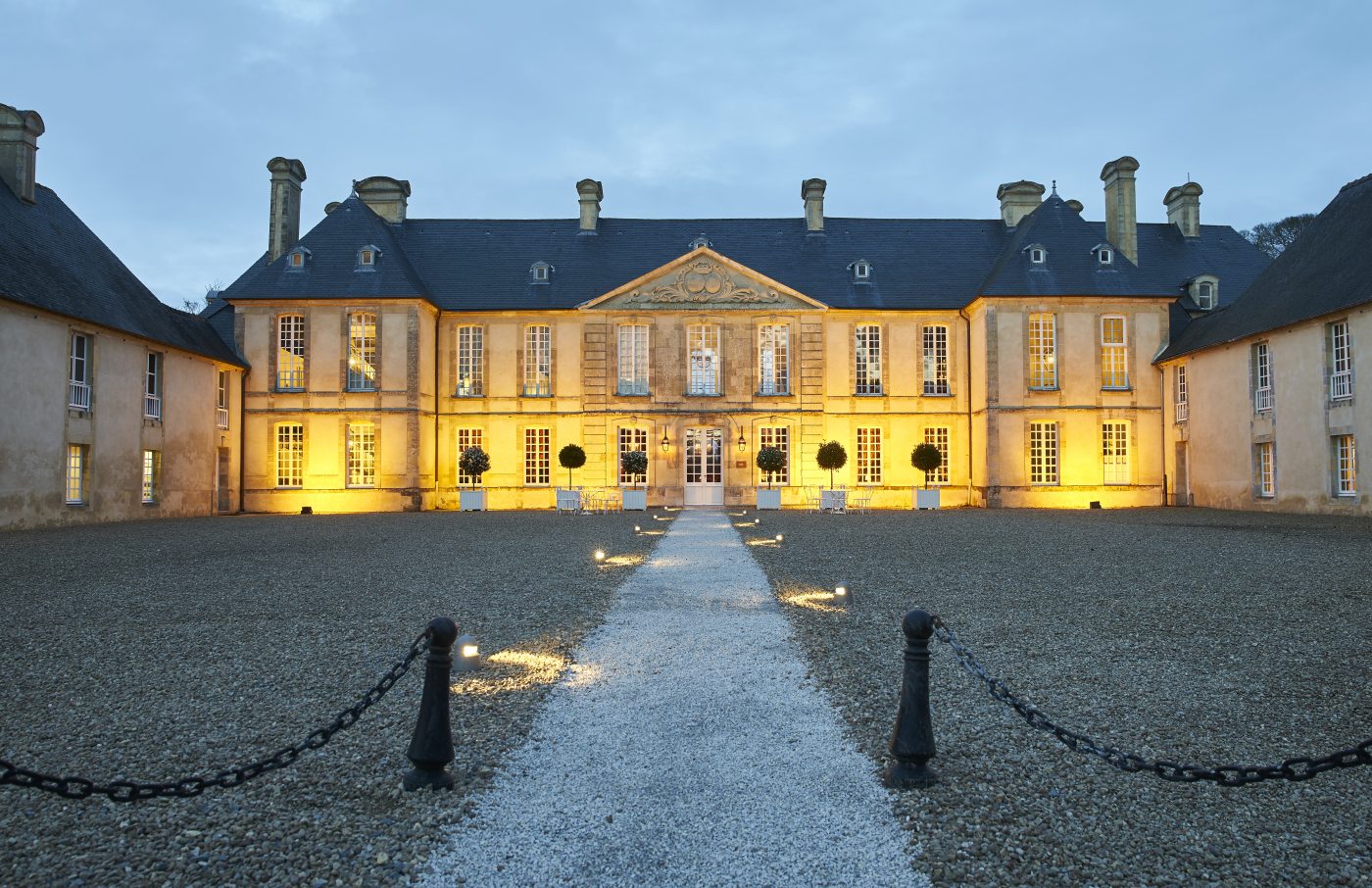 Chateau D’Audrieu, which was just awarded a 5th star in March by ATOUT France, dates back to the 11th century and William the Conqueror, when it was the residence of Lord Percy, believed to be William’s personal chef.

Just over 2 hrs from Paris, the hotel stands in 62-acres of park with 12-acres of flower gardens and alleyways of tri-centennial English trees. Despite the grand building’s great size, there are only 29 guest rooms, each so tastefully rendered. 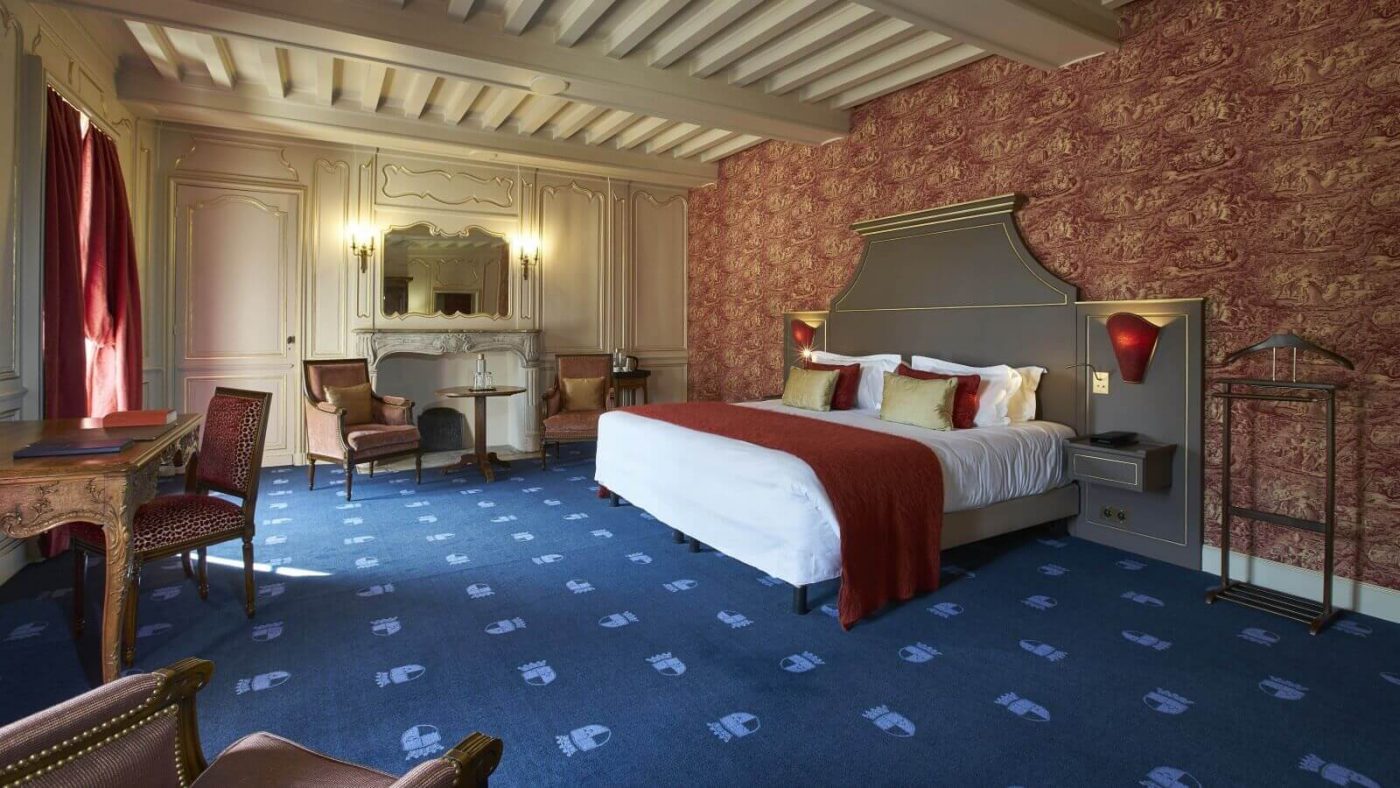 The current construction was built in 1715 (so Percy’s original kitchen is gone, I guess). Nearby are the beaches of the D-Day landings, and you’re within 9 miles of The Cathedrale Notre-Dame Bayeux and the famed tapestry housed in the museum of the same name.

Put the kids with baby-sitting and hit the spa, which offers massages and facials specifically designed by gender. Spa ingredients by Sothys, natch. Anti-aging and Hyaluronic deliciously — long — body treatments. Say that after leaving the bar!

Le Seran restaurant is magnificent and is run by veteran chef Olivier Barbarin, who uses fresh seasonal products from his zip code-sized garden. It’s open every evening from 7pm to 9:30pm, and for lunch 12:30 to 2 on weekends, and bank holidays, of which the French, to their great credit, have many. 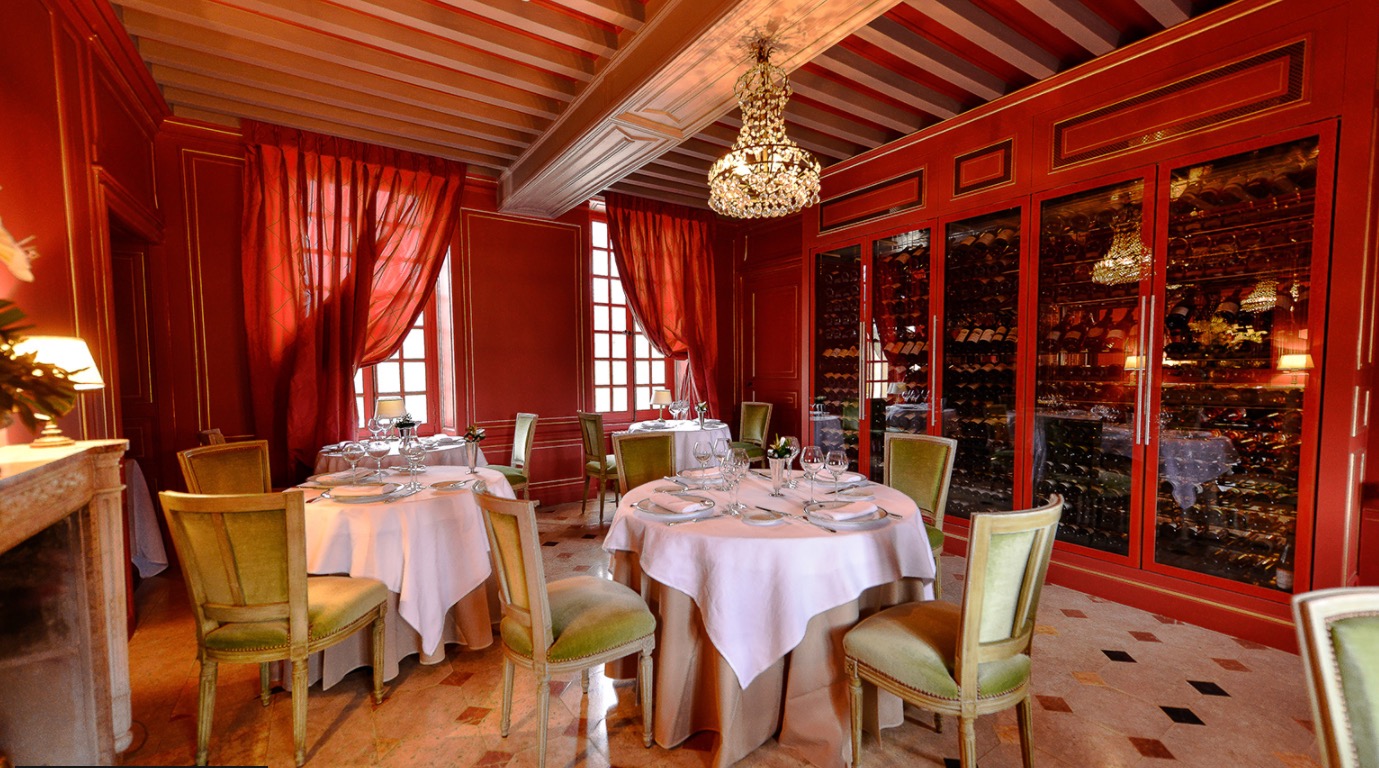 25 Rooms, 4 Suites and a Luxury Treehouse