Following in the footsteps of the great Arctic explorers, the dangers of far northern exploration are well established: hypothermia, ship crushing icebergs, polar bear attacks. Then there’s the knuckle hop.

We’re hundreds of miles north of the Arctic Circle, on board the Ocean Endeavour, taking part in Adventure Canada’s Arctic Safari expedition, and we’ve just landed the motorized Zodiacs on a beach in Pond Inlet on the northeast tip of Baffin Island. A lively group of local kids, chattering away, lead us to the community centre where some talented and tough locals are about to give a demonstration of Inuit games.

A combination of physical skill, stamina and balance – combined with the very real possibility of grievous personal injury – Inuit games are not for the faint of heart. For the knuckle hop, a lanky local teen peels off his Montreal Canadiens cap, lies face down on the hard, gymnasium floor and assumes a kind of push-up pose on his toes and knuckles. That seems painful enough, but then he starts “hopping” along in this position. He makes it a good 10 hops and walks away unscathed, but tells me later that the best players can move close to 200 feet this way and are regularly left with badly bruised and bloodied knuckles.

Back on the Endeavour, as we sail north towards our next destination, a few of the Inuit staff set up a sort of mini-Olympics and invite passengers who would like to risk their fists in a knuckle hop to compete. There are no takers, but a few of us have a go at the two-foot high kick. Our attempts are largely feeble, but, good news department, we avoid any serious injury.

Aboard a 450-foot, 1B ice class ship, we’ve got the ruggedness and strength of a research vessel combined with the comfort of an ocean liner. Although the landscape around us feels like another planet, it is still part of Canada, albeit one that few Canadians – or anybody, beyond the sparse local population – ever sees. 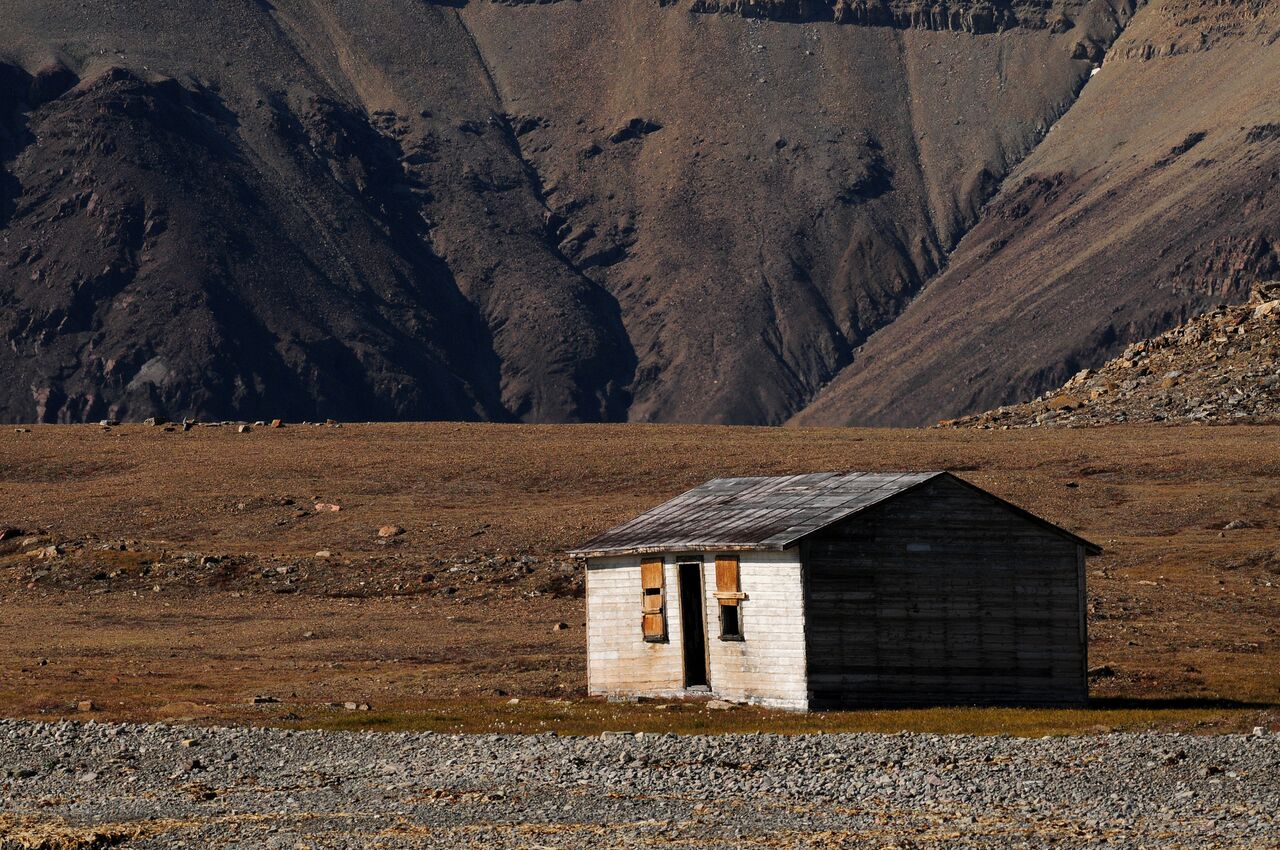 This far north, no matter how late I go to bed the sun is always up and no matter how early I wake up it’s still there. One morning I pull back the blinds and gaze out on the 2,000-foot striated cliffs of Prince Leopold Island. Save for a few seasonal scientists, the island is completely uninhabited by people. It is home, however, to hundreds of thousands of migratory birds including thick-billed murres, black-legged kittihawks, northern fulmars and black guillemots, all of whom who nest noisily in crevices on the vertical cliffs. 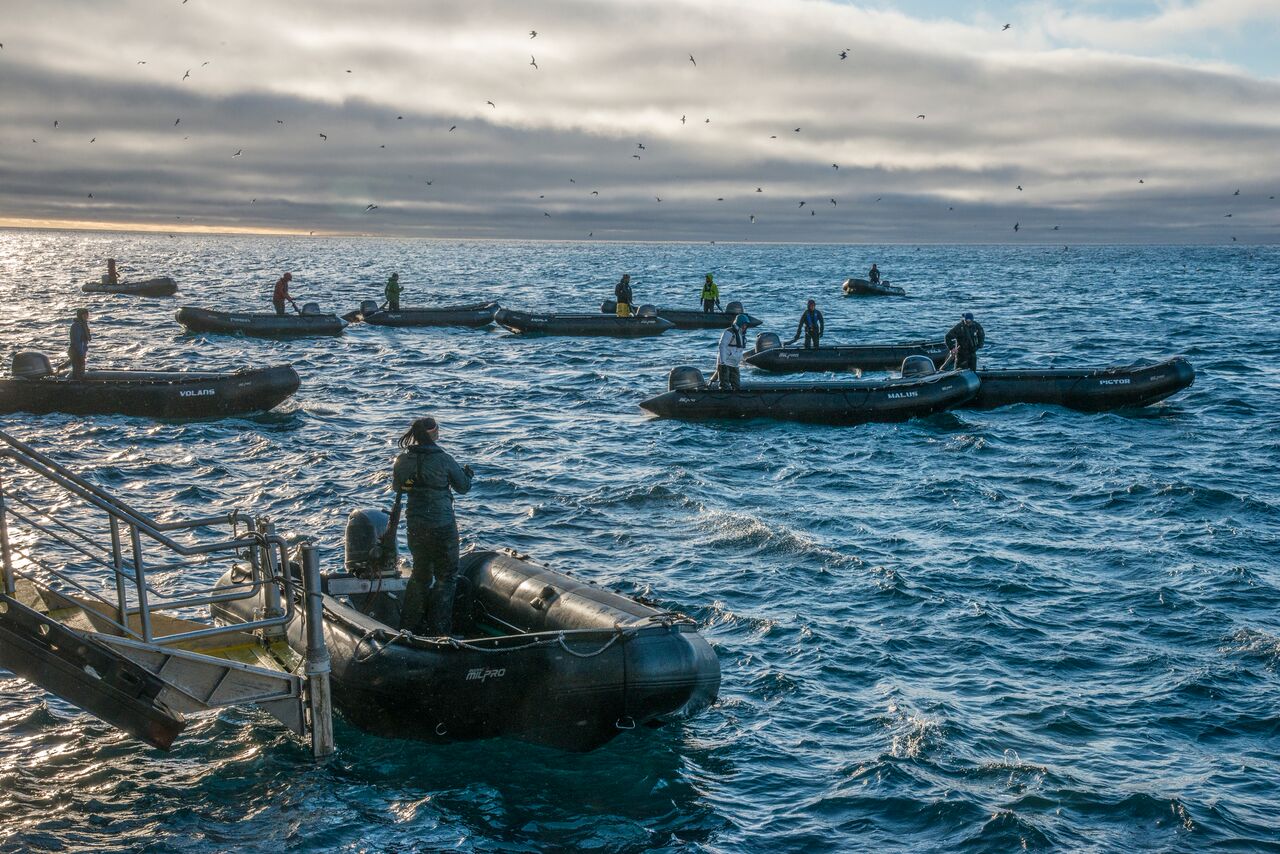 After breakfast, groups of us don our lifejackets and pile into Zodiacs for a cruise around the island. Over the roar of the chattering birds our guide, Angutti, fills us in on the private life of the island’s most famous denizens. “This one island is home to 6 per cent of Canada’s murre population,” he says. “On average, each day, the birds will travel up to 60 miles in search of food. They’re also excellent swimmers and basically fly under the water. They can go down more than 500 feet.” His story is interrupted when someone spots a carcass, probably a walrus, that’s washed up on shore. It’s a sorry sight – several glaucous gulls pick away at its decomposing husk – but an impressive one. 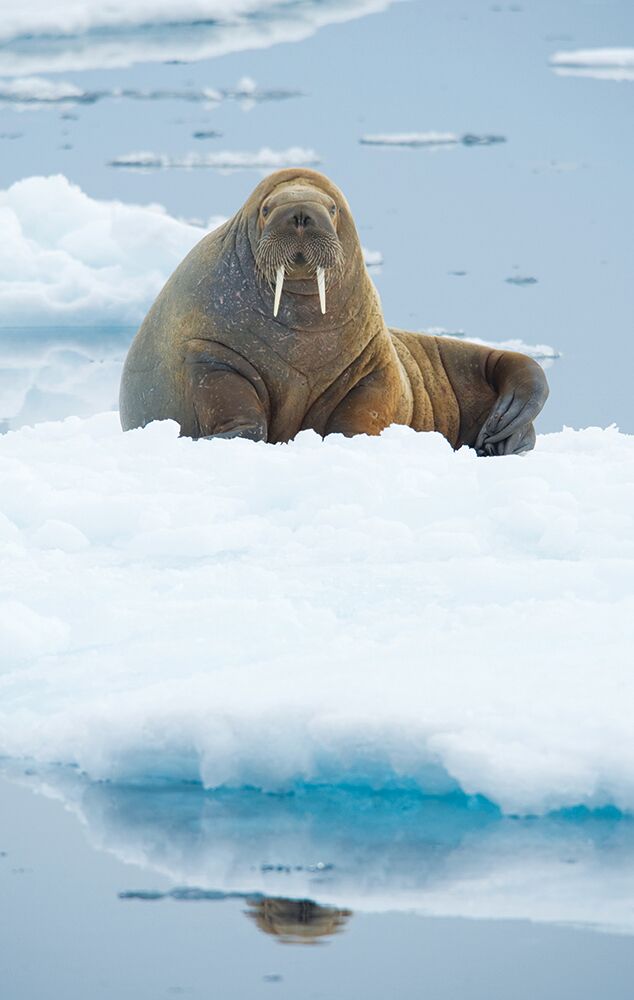 I am the Walrus***Andrew Stewart***

Walrus again make a ghostly appearance the next day at Dundas Harbour. As we motor towards shore, our zodiac driver points out a rocky spit of land. “That place is popular with walrus,” she says. They’re not there now, probably owing to the lack of ice in the area this year, but they must have been recently. Their lingering smell, dark and funky, hangs in the air and makes a small part of me grateful they aren’t here.

Dundas Harbour is situated on the southern coast of Devon Island, the largest uninhabited island on earth. The landscape is so barren that NASA considers it one of the best Mars analog sites on earth. We’ve come to visit the remains of an abandoned settlement, originally established by the Canadian government in the 1920s to curb illegal whaling. A group of Inuit were settled here in the 1940s, but left after just over a decade. The final inhabitants, members of the famous Royal Canadian Mounted Police, also attempted to establish a patrol base here, but it was abandoned more than 60 years ago.

Only a handful of wooden structures remain and although they are in surprisingly good condition the island has a desolate, spooky aura about it. “One of the first inhabitants of this place killed himself in despair just days before he was to be taken out,” David, one of the expedition team leaders tells me. “Another one accidentally shot himself while hunting walrus not far from here.” It’s a dark but fascinating place.

Any lingering melancholy is forgotten when, back on board, an announcement comes over the ship’s PA system during dinner: “Ladies and gentlemen, if anyone is interested, a pod of whales has been spotted off the starboard beam.”

I arrive on the viewing deck to the sound of ooohs and aaahs as a geyser of mist rises from an exhaling humpback. The sighs turn to cheers and applause when another humpback comes shooting out of the depths for a tremendous breach, it’s impact echoing off the water. The ship slows to a crawl, giving us a front row seat as the great, knobbly beasts play and feed in the black water. 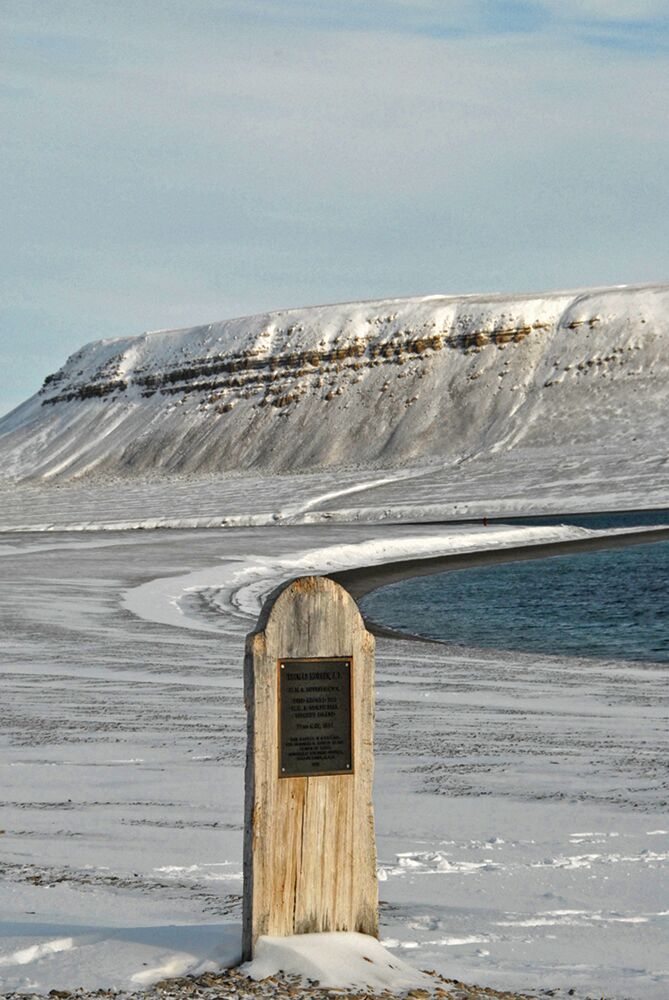 For many of us our final stop on the expedition, Beechey Island, is poised to be the highlight. Anyone with an interest in Arctic exploration knows what a special place this is. It was here in 1845 that Sir John Franklin’s ill-fated expedition to discover the northwest passage set up camp to spend the winter. Franklin and his entire crew of 129 men ultimately went missing. For years, search parties combed the high arctic in search of the explorers. In 1850, the first signs of the crew, three grave markers, were found on this island. It would take more than 150 years before the ships were finally found (which of course became a TV special).

Polar bear spotters are strung out along the hiking trail that leads from the gravesites to the old Northumberland supply house. This place might seem empty, but the trained and armed Adventure Canada guides on watch remind us we’re far from alone up here. Built in the 1850s for Franklin and other explorers to utilize, there are only ruins left of the supply house today: rusted out cans filled with pebbles form a cross, barrel hoops rest in soft moss and a stark memorial pays tribute to Franklin and his crew. 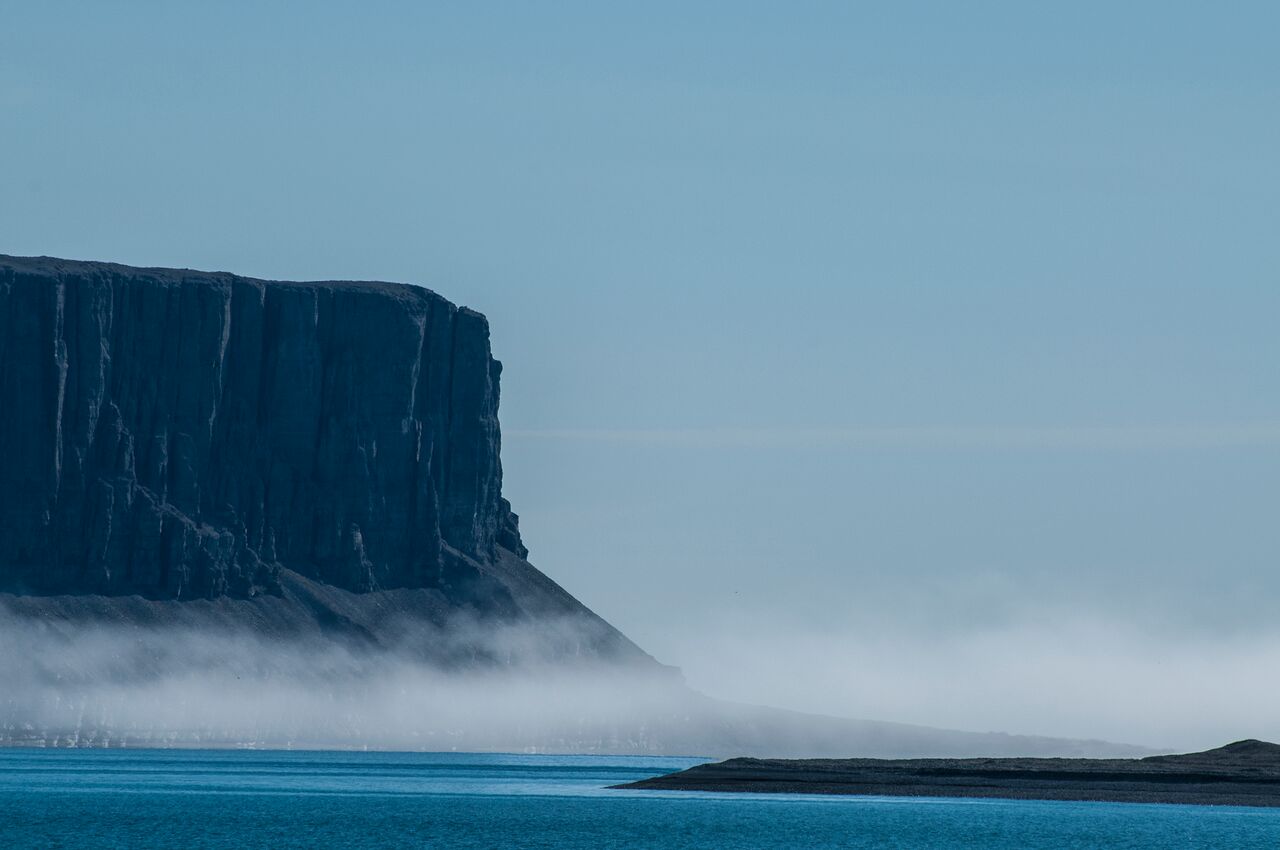 We make it back to the ship without any polar bear threats, but later that evening, with the low thrum of the ship’s engine echoes off the towering mountains that surround us, we sail slowly into a barren fjord. As far as the eye can see there is just water, rock and sky: no roads, no structures, no vegetation and, at first, no signs of life whatsoever.

A pair of kittiwakes, breaking the stillness, fly in low across the bow and settle on the still water. Looking past them, off in the distance and hard against the rocky shoreline, we spot a polar bear prowling and pacing in search of food. The bear, a large male, moves across the uneven ground with ease. It’s easy to see why the Inuit worshipped this powerful animal long before Canada even became a country 150 years ago. Like spotting an elephant in Africa or a tiger in India, seeing a polar bear in the wild is a sight no explorer, even a modern one, can ever forget — and in a year when the country’s on everyone’s must-see list, there’s no better time to see it.

Adventure Canada runs several arctic cruises each summer. The next Arctic Safari voyage is scheduled for August of 2018. So you have time.