When my husband and I spent two years bringing our 1950s cottage house into the 21st Century, we had every intention of staying. Imagine my surprise upon returning from a late autumn Florida getaway, when I found him sitting on the couch in our newly built screened porch, combing the internet for available homes in Oxford, Mississippi.

“We’ve talked about this,” I said. “When we’re ready for retirement, we’ll move back and get a small place.” 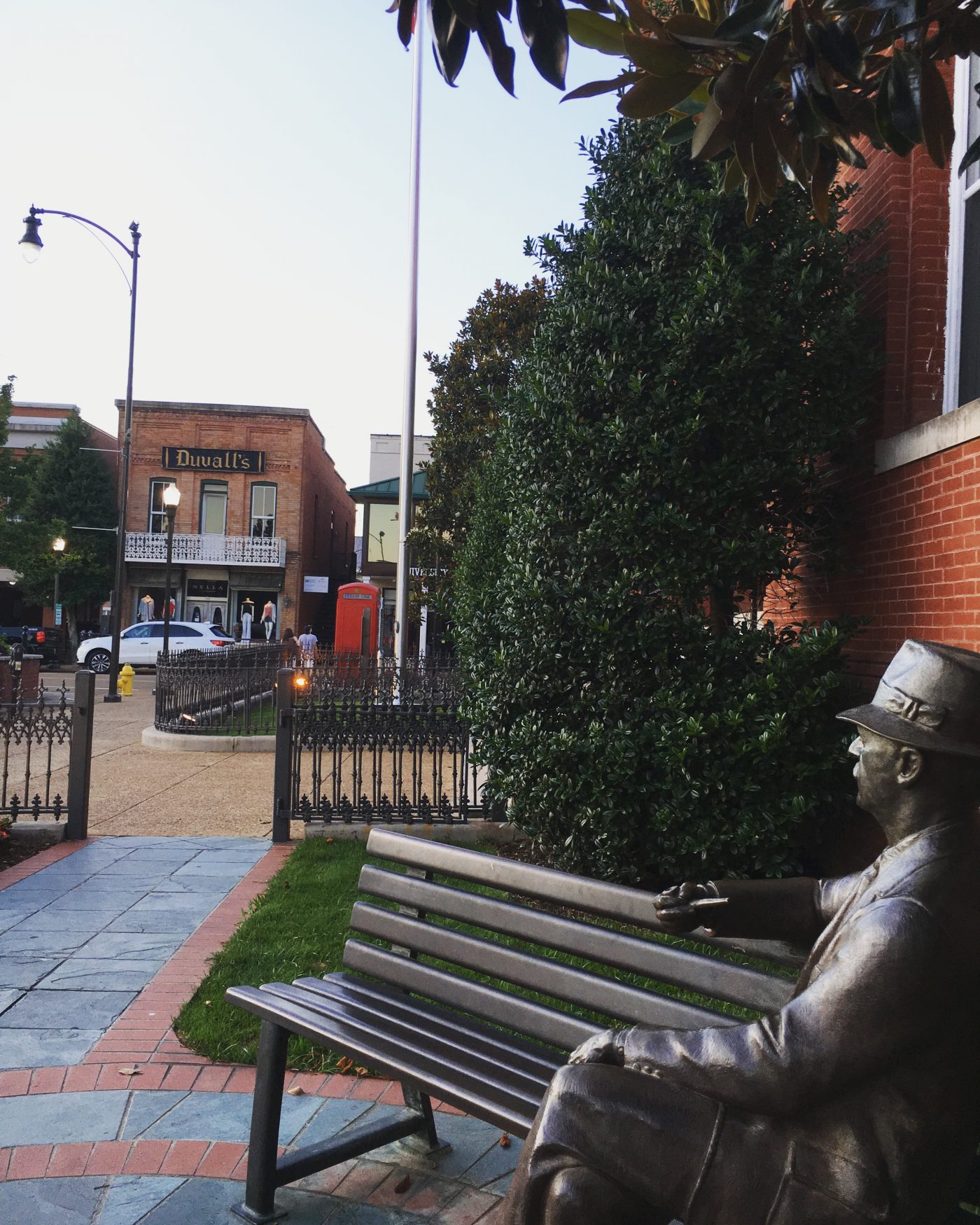 Sculpture on the square of William Faulkner, Nobel Prize winner for Literature and Patron Saint of Oxford. He’d have loved these new restaurants ***Emily Gatlin***

As with any life-altering decision, you must make a list of pros and cons. Our “pro” column included bullets like “James Beard award-winning food,” “theatre!”, “Greek pimento cheese,” “people will visit us”, and the perennial greatest hit, “Ole Miss sportsball”. Our “con” list was small but practical, with the usual suspects: work commute, taxes and reasonable adult things. In the end, we rented a storage unit the following week at the edge of town, and slowly moved our belongings.

Who was I to argue? Oxford, with a population of a little over 20,000 residents, is home to the Southern trifecta of best life living: Faulkner, food and football. It’s known as the “Velvet Ditch” because it’s so comfortable, it’s hard to leave. You fall in and can’t get out. The town square is idyllic and reminiscent of a time long passed, often dramatized in travel magazines as an oasis of culture, which it most definitely is, but wasn’t always.

Almost two decades ago, when I first arrived in Oxford as a fresh-faced 18 year old, you could count the total number of restaurants (forget “good ones”) on two hands. Walmart was one of the simple old ones with a brown facade and part of the shopping mall (seriously, there was an entrance into the mall by the cash registers), and the biggest ticket in town was a brand new Kroger, which quickly put the Jitney Jungle out of business. (Yes, that was the actual name of the grocery store, before Winn-Dixie acquired it and subsequently went out of business.) One of the only remainders from my early Oxford days is chicken-on-a-stick, and let’s be honest, along with cockroaches and Big Macs, it would survive the apocalypse.

Oxford’s evolution was long in the making. Thanks to a resurgence of locally owned businesses and restaurants making the Square their home in the 1990s, it is now a vibrant tourist destination with two luxury hotels, high end boutiques, and more restaurants than you can shake a stick at. Chef John Currence of City Grocery and former mayor Richard Howorth, proprietor of the world famous Square Books, get most of the hard earned credit for that. 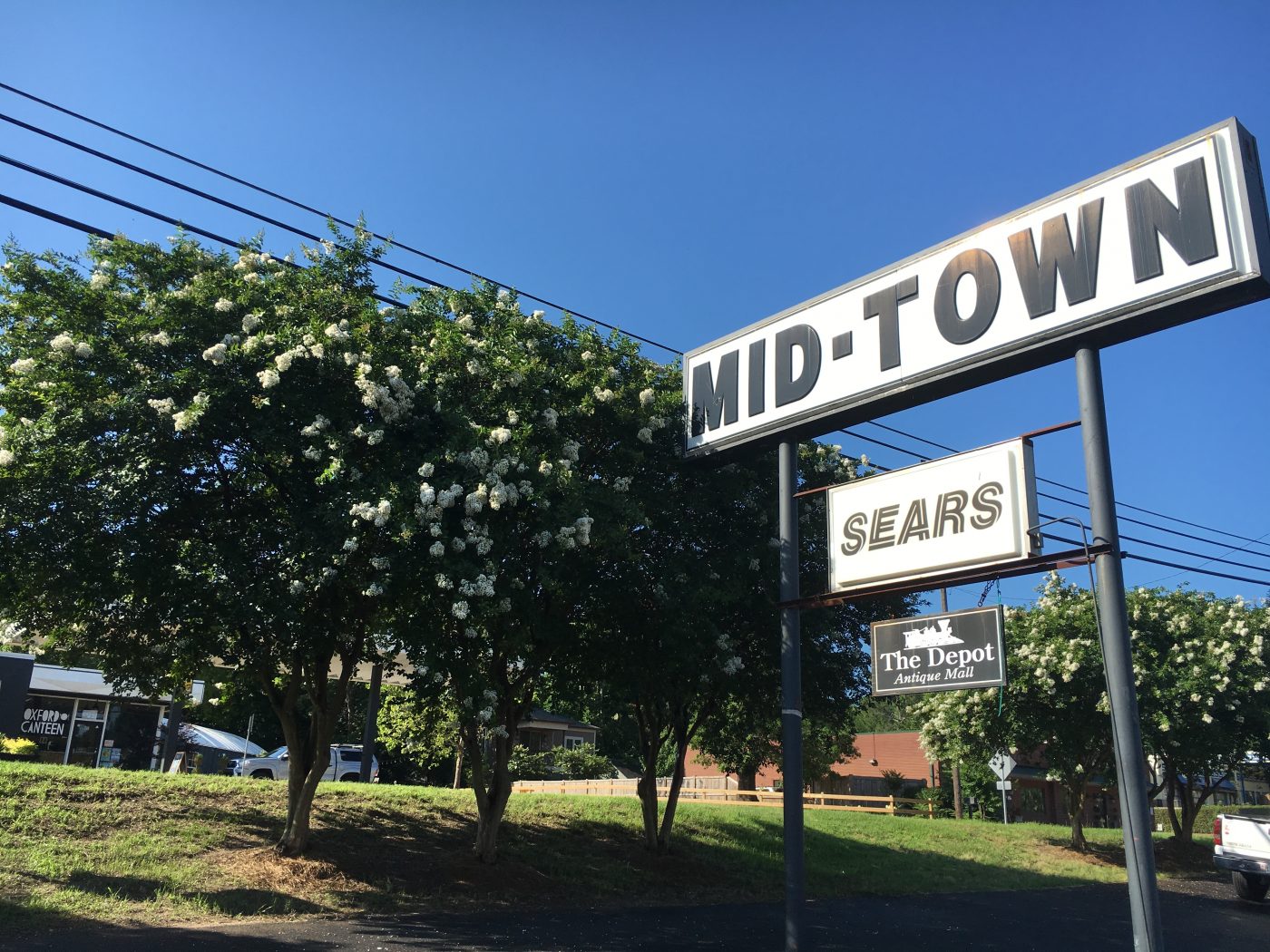 No sign of these restaurants, but they’re there! Next to the Sears store! ***Emily Gatlin***

But in walking distance from the Square, down North Lamar Boulevard, past the beautiful Victorian homes, is a crusty old shopping center with arguably some of the best food the whole of Mississippi has to offer. The Mid-Town Shopping Center is home to a Sears Hometown Store (those still exist), the YMCA, and count ‘em, four first class restaurants, two of which were opened by a James Beard Award winner, and one has a head chef who has been a James Beard Award semifinalist or finalist five times. Across the street, there are three other can’t-miss places: two were old service stations, and one is a small grocery, serving the best barbecue sandwiches in town. As much as Oxford loves her shiny new things, she is very good about repurposing old discarded properties. 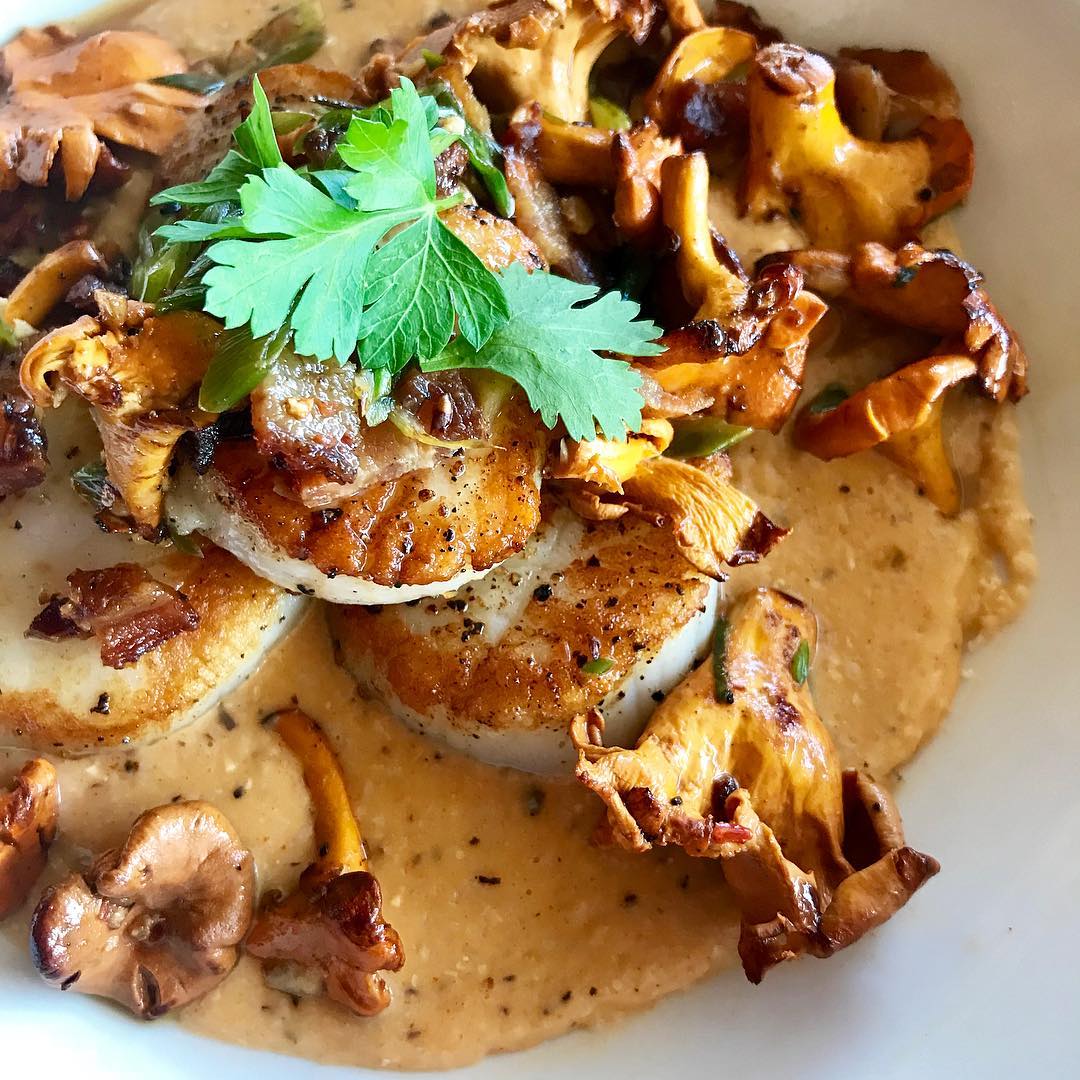 Can’t save the best for last, so it’s first. Snackbar is one of the two John Currence brainchildren in Mid-Town, known for its mashup of a French bistro and North Mississippi cuisine, endearingly dubbed “Bubba Brasserie”. It’s also an oyster bar, with fresh selections that vary weekly and Indian-born head chef Vishwesh Bhatt is the man behind the magic. One bite of his Confit Duck Croque Madame will tell you everything you need to know about why he’s been nominated for those five James Beard Awards. citygroceryonline.com/snackbar 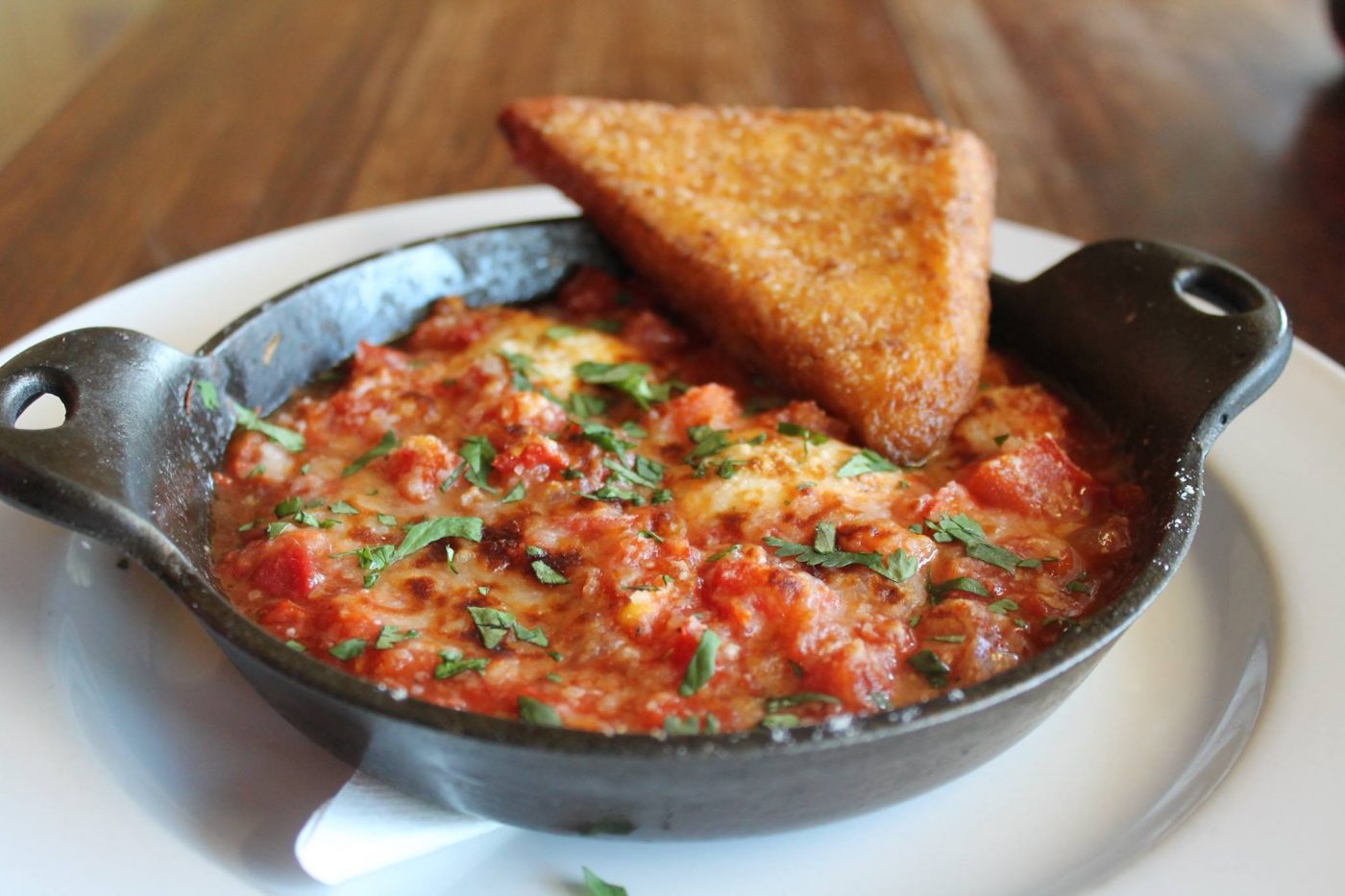 “Eggs in Purgatory” with a parmesan grit cake, at Big Bad Breakfast

Lard. Have. Mercy. Big Bad Breakfast started serving the most important meal of the day back in 2008, thanks to a “peculiar little location” in the Mid-Town Shopping Center that became available. This is the joint that started it all. John Currence’s love of breakfast combined with a vast need to fill a bacon and egg void is behind BBB, where they serve cathead biscuits (named for their size — they’re as big as a cat’s head, not for actually being made with any part of a cat), Big Bad Bacon, and a fried oyster scramble that’ll knock your socks off. The restaurant is so successful it has its own cookbook, and with future plans of franchising all over the southeast, your town might get lucky. bigbadbreakfast.com/oxford 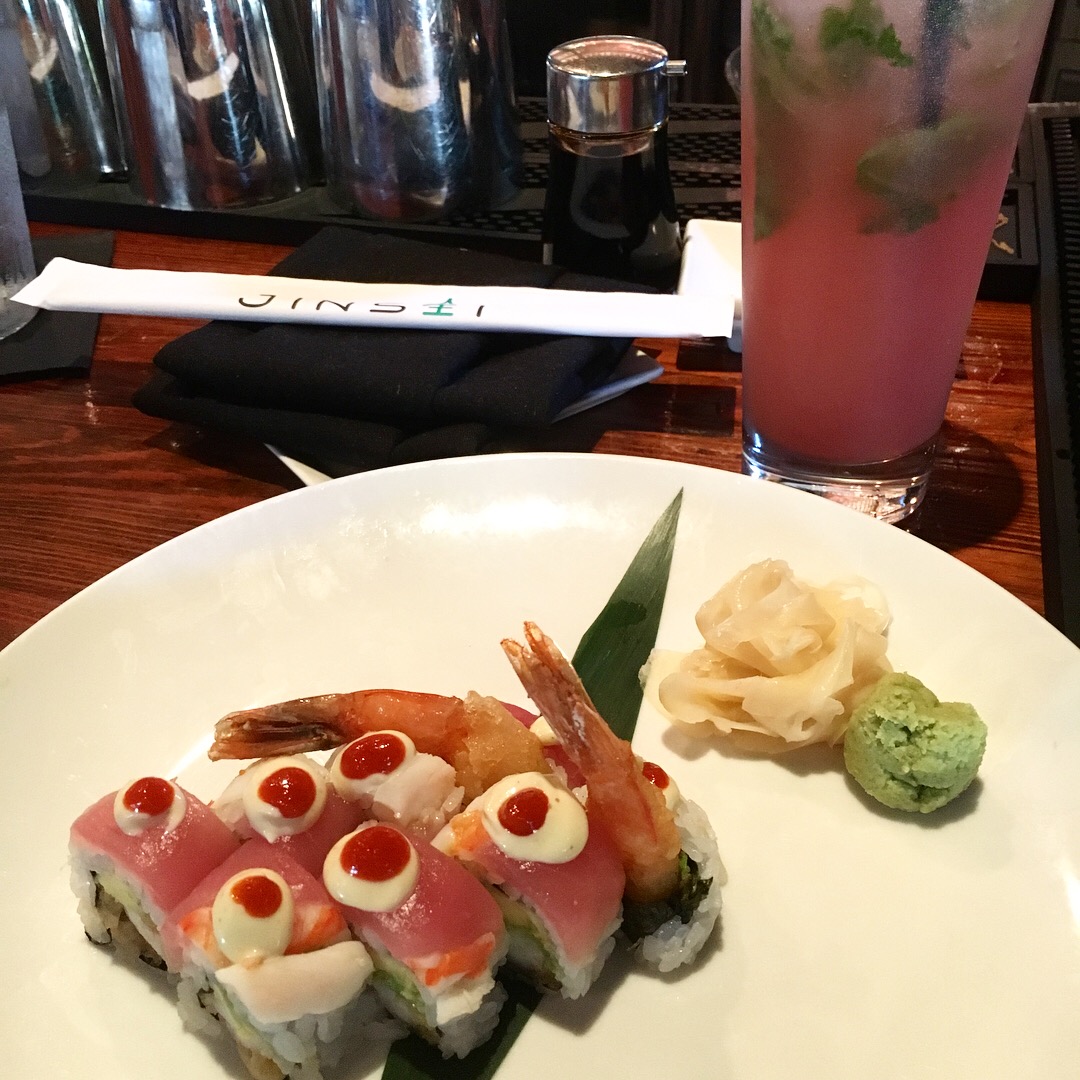 Wasabi aioli and Sriracha top the Bubblegum roll. Which has no bubblegum, just so we’re clear  ***Emily Gatlin***

Fresh sushi five hours from the coast? Yep! They bring fresh fish in daily and leave it in the hands of executive chef Taichi Omori, who knows what he’s doing. If sushi isn’t your cup of tea, they have a stellar cocktail menu and an array of Kobe dishes, including the “River rock Kobe” where they bring a hot rock to your table so you can sear your own meat. With big-city atmosphere and interior, you’ll swear you’re in New York. Or, if you have an imagination, Tokyo. Plan ahead, as they do not take reservations. jinseioxford.com 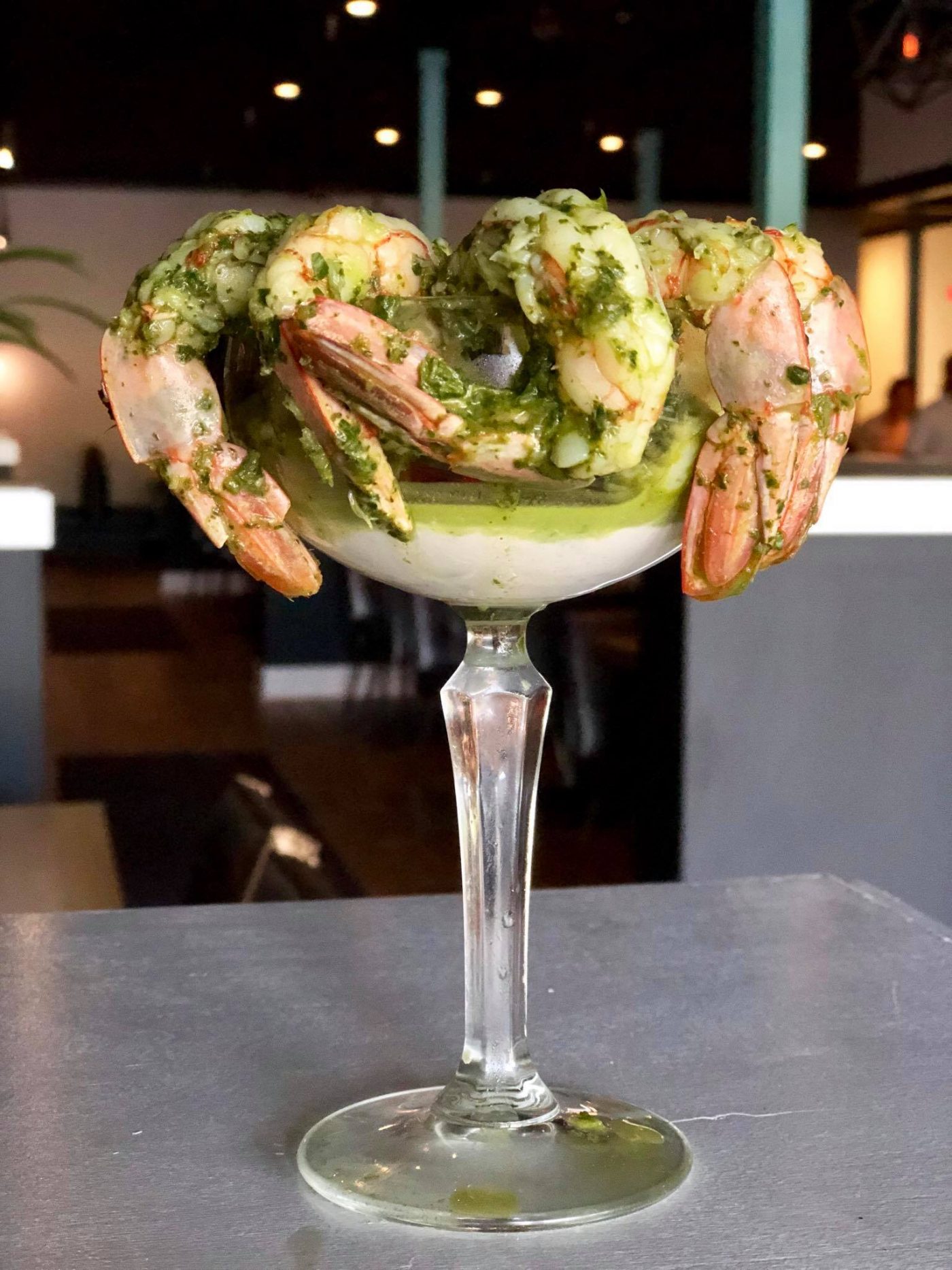 It might be the new kid on the block but you’d swear it’s been there for years, like its namesake, the famous Track 61 under the Waldorf Astoria. Oxford was lacking a really great Italian-American restaurant, so local restaurateur Brooke Krizbai (of Volta, see below) teamed up with former Oxonian and friend Chef Becca Richards (now the executive chef at Stoller Winery in Willamette Valley, Oregon) to create a menu as beautiful as the space. Their signature cocktail shrimp are marinated Argentinian reds, served with horseradish remoulade, and their polenta is made from local Grit Girl grits, a treasured Mississippi favorite, stone ground right here in Oxford. Walk through a tucked away door in the corner for the Sinatra Coffee Lounge and treat yourself to bottomless $10 mimosas. (Oxford is still a college town, y’all.) tracksixtyone.com 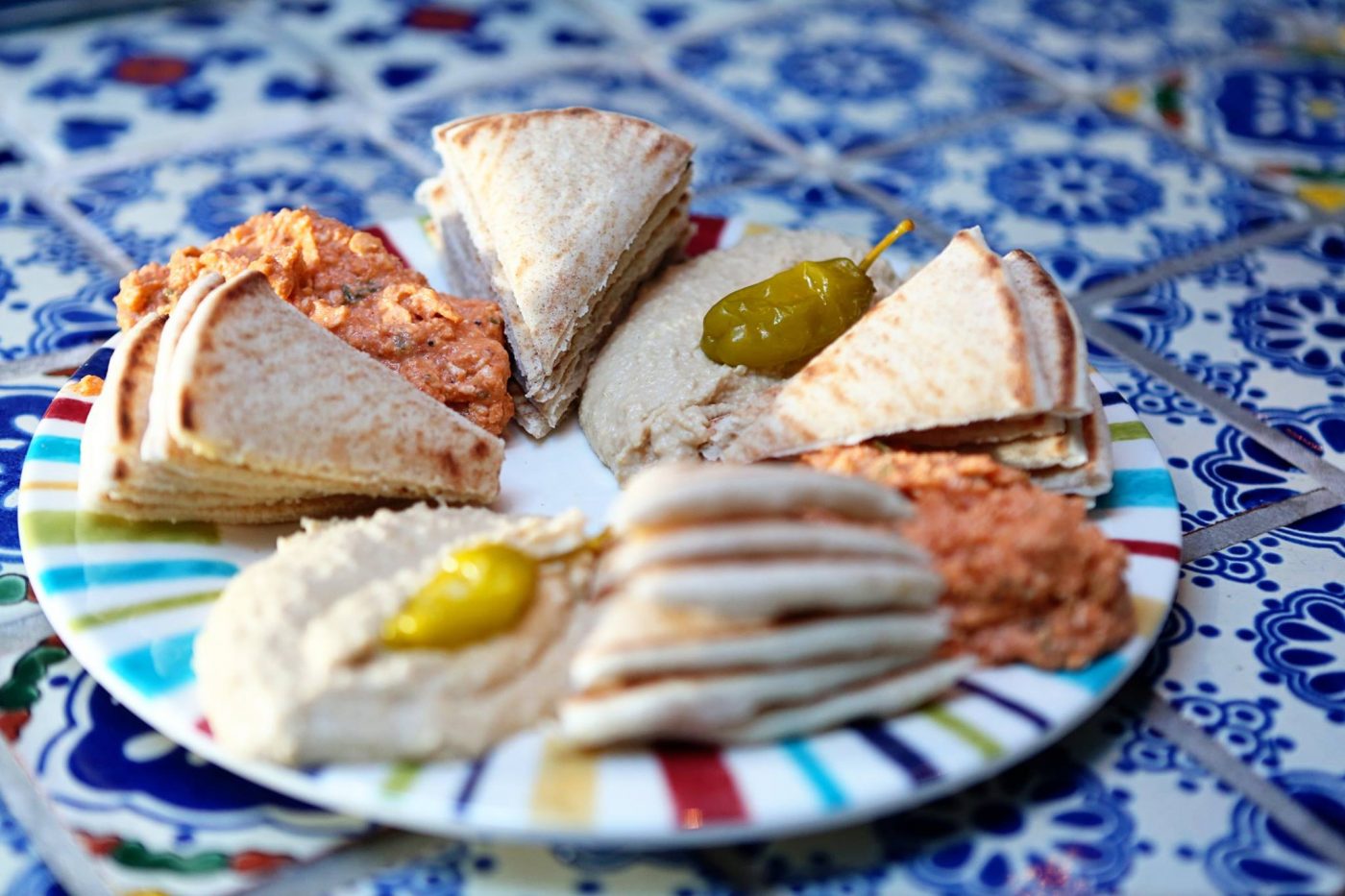 I hope you like Greek food and killer margaritas! This place is nothing short of amazing, thanks to mastermind Brooke Krizbai. Fried brussel sprouts with bacon, caramelized onions and feta are a side dish option, as well as… it’s hard for me to even type this without bolting down the street… Greek pimento cheese. I’ve never thought pimento cheese would be so good that it would be a reason for moving, but here we are. There are so many good things to eat here that you’ll need to come back a second time, rocking your finest expandable pants. Try the Hotty Toddy Balls, which are deep fried magic balls filled with garlic mashed potatoes, bacon (we really dig bacon here) and fresh mozzarella. voltataverna.com 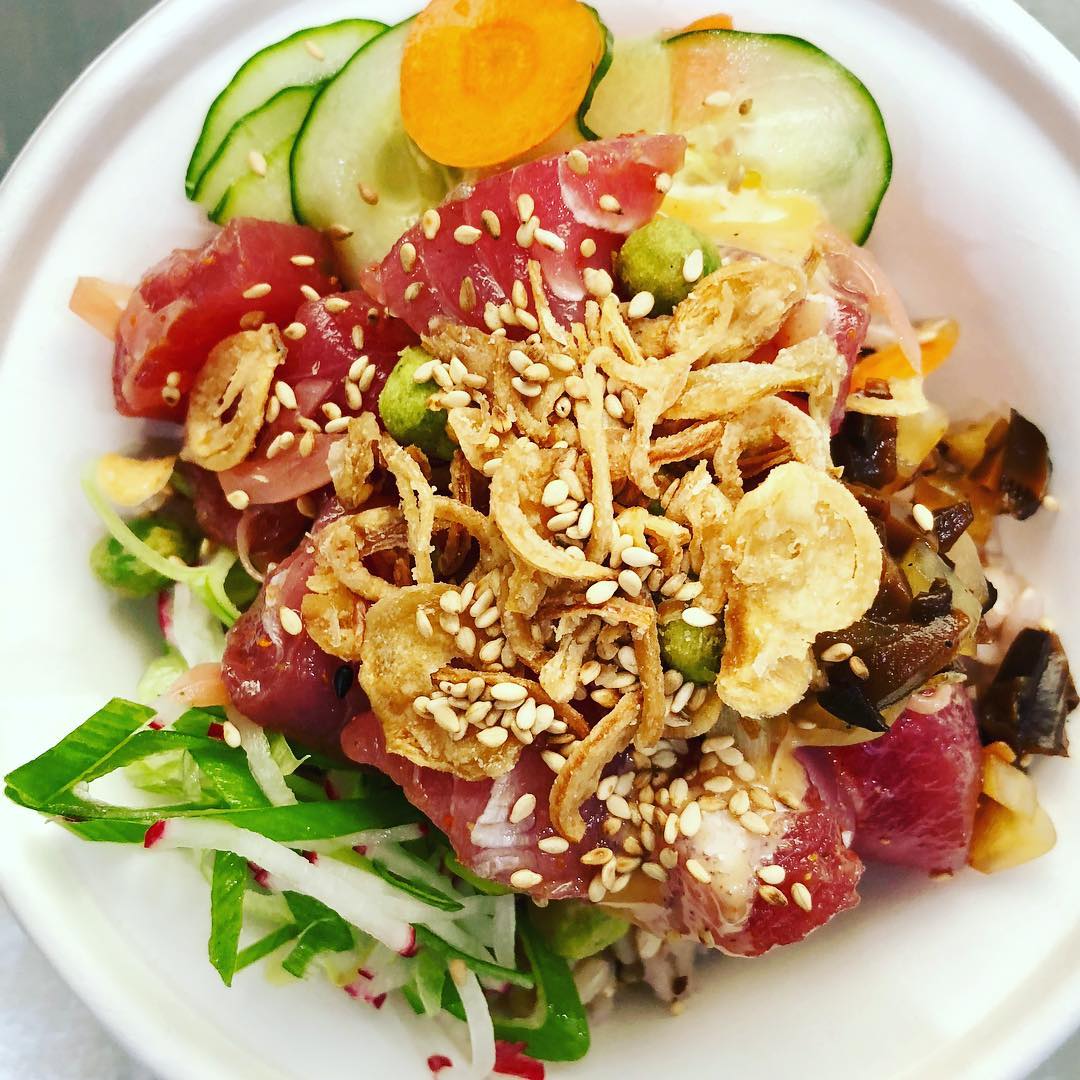 Once it was a small walk-up window on the Square, sort of like a food truck with bricks, but Chef Corbin Evans repurposed a former gas station-turned-car wash to serve legions of hungry Oxonians fresh dishes and farmers market-inspired salads. It’s got an eclectic menu from ramen to sandwiches, you can get breakfast all day (chorizo tacos, y’all), Mexican Coke (not the stuff allegedly brought here by all the “bad hombres” our President keeps seeing under his bed), and their “Soup of the Moment”, which is announced via Instagram, is a big hit. They’re open for brunch on Sundays and do have a nice selection of gluten-free options. oxfordcanteen.com 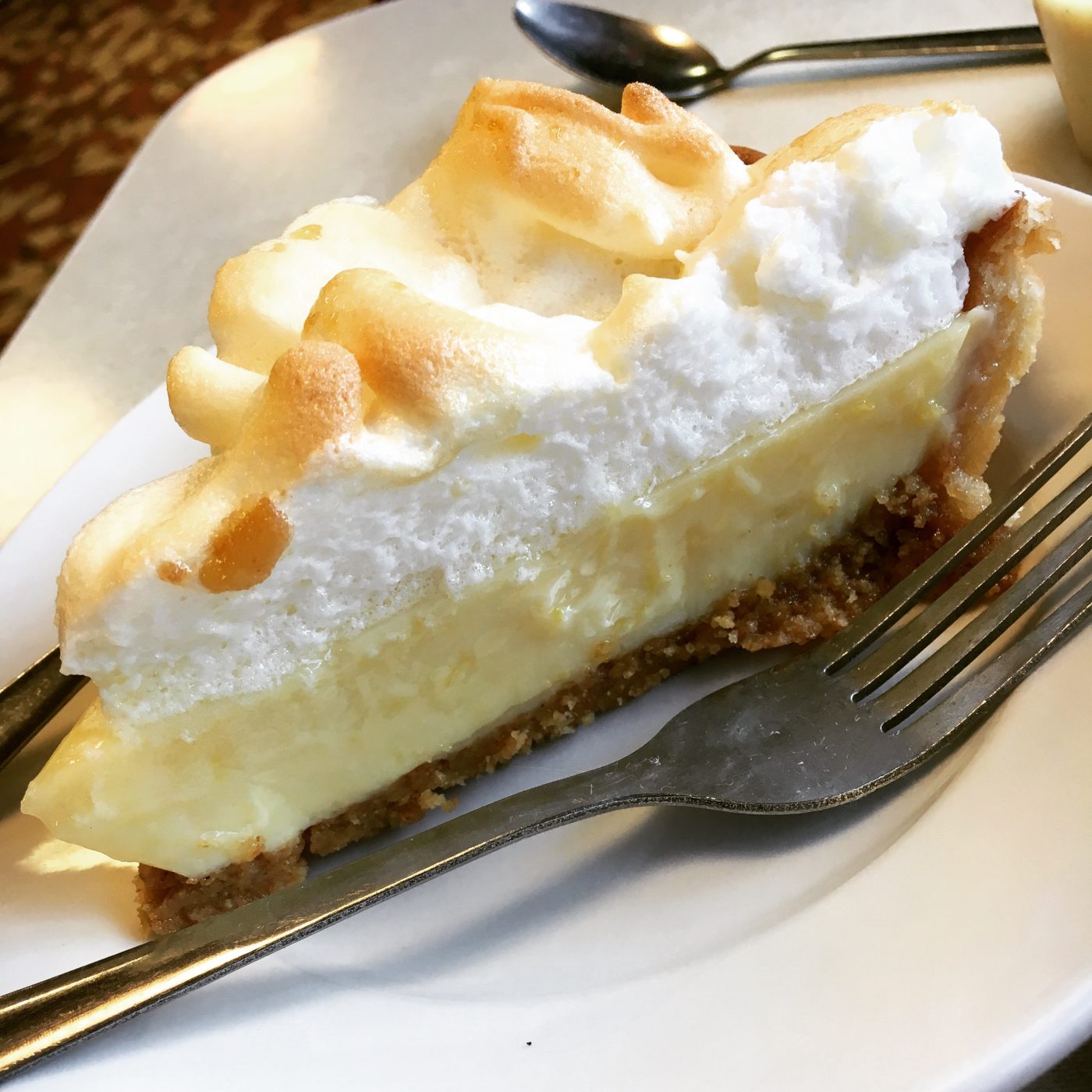 The Beacon ladies make their own pie, y’all***Emily Gatlin***

These are mentioned together because they’re both local joints, and these are secrets we keep to ourselves. They don’t have websites and the Beacon, which has been around since 1959 when North Lamar was a pile of dirt and kudzu, just recently started serving sweet tea. (It was a thing… they got so tired of people asking for it, the waitresses had t-shirts that said, “Naw, we ain’t got no sweet tea!” The times, they are a’ changin’.) These are the oldest of the old school, the most authentic representation of local Oxford that you’ll find, so be warned — you will meet a host of characters who all want to know where y’all are from, and how the hell you found them. It surely wasn’t from the internet. You must know somebody… 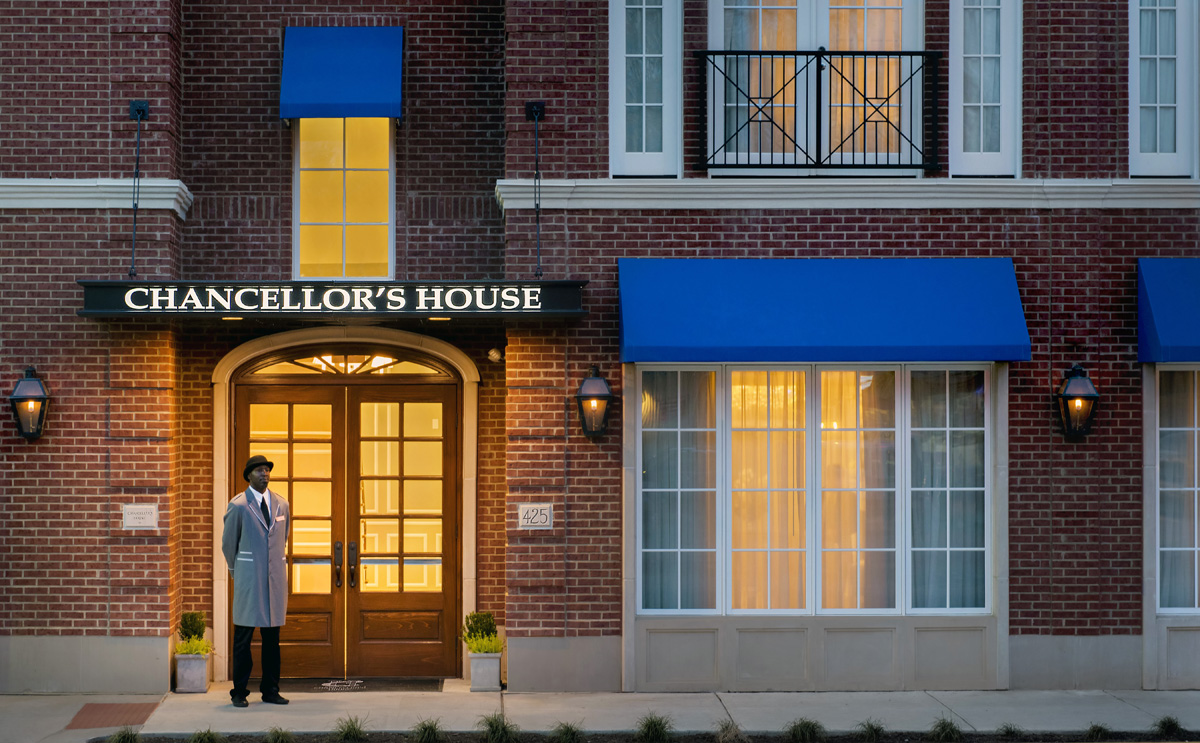 There are two beautiful new luxury hotels within walking distance of your Oxford food tour.

Graduate Oxford on the north side of the Square is undeniably hip, modern and laid-back, and features the Coop, Oxford’s only rooftop bar. Cabin 82 is a quaint Southern cafe in the lobby, reminiscent of the Neshoba County Fair but way less sweaty.

Chancellor’s House, located on the southern tip of the Square, is a new take on old Southern grandeur. Of the 31 rooms, 13 are suites with Juliette balconies that overlook the Square, and each room has its own soaking tub and double sink. Chancellor’s Grill steakhouse in the lobby accepts reservations, if you find yourself too comfortable on the property to leave.

Robert Johnson sold his soul to the devil at the crossroads 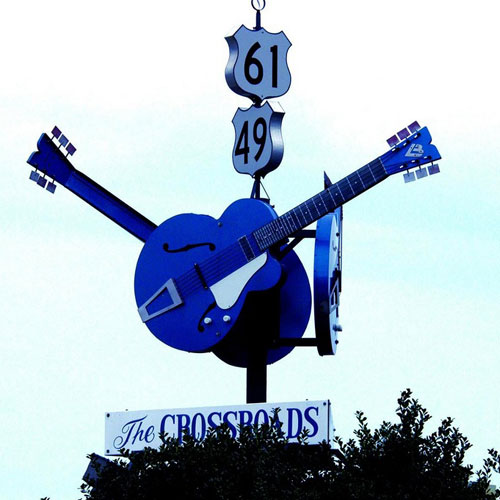 The legendary crossroads where Robert Johnson sold his soul to the devil. Or maybe not***Visit Mississippi***