Everything is about happiness. What it all means, what it all feels like, and, of course, how to acquire it.

The New York Times publishes a piece about happiness every few months – the format might change, but the basic premise is the same: you should be pursuing it. Endless amounts of workshops are scheduled across the globe, Amazon.com has specific divisions dedicated to books on obtaining happiness, and there are apps specifically engineered to help you find it, usually through more meditation or even more excessive exercising.

Bhutan has bigger plans. In 1972 the country’s fourth Dragon King, Jigme Singye Wangchuck, coined the phrase “Gross National Happiness” (GNH). The idea was to build a country based on Buddhist spiritual values opposed to western materialism, usually defined by Gross Domestic Product (GDP). And decades later the citizens, from my limited visitor’s perspective, seem happy as can be.

But long before Bhutan decided to give importance to something other than money and greed, the ancient Greek philosopher Aristotle said, “Happiness is the meaning and the purpose of life, the whole aim and end of human existence” – and who are we to argue with that. The tricky part is, isn’t happiness totally subjective? 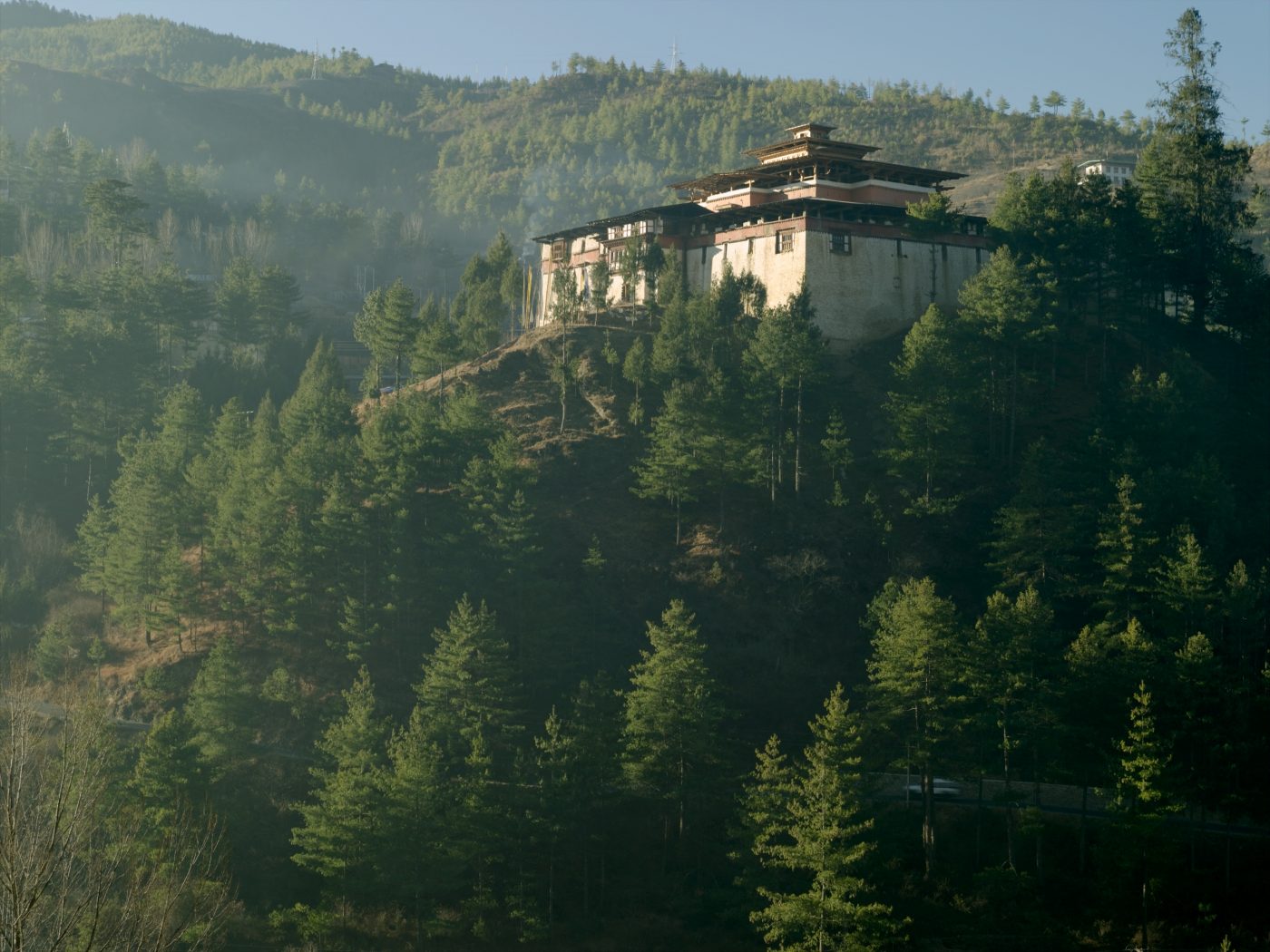 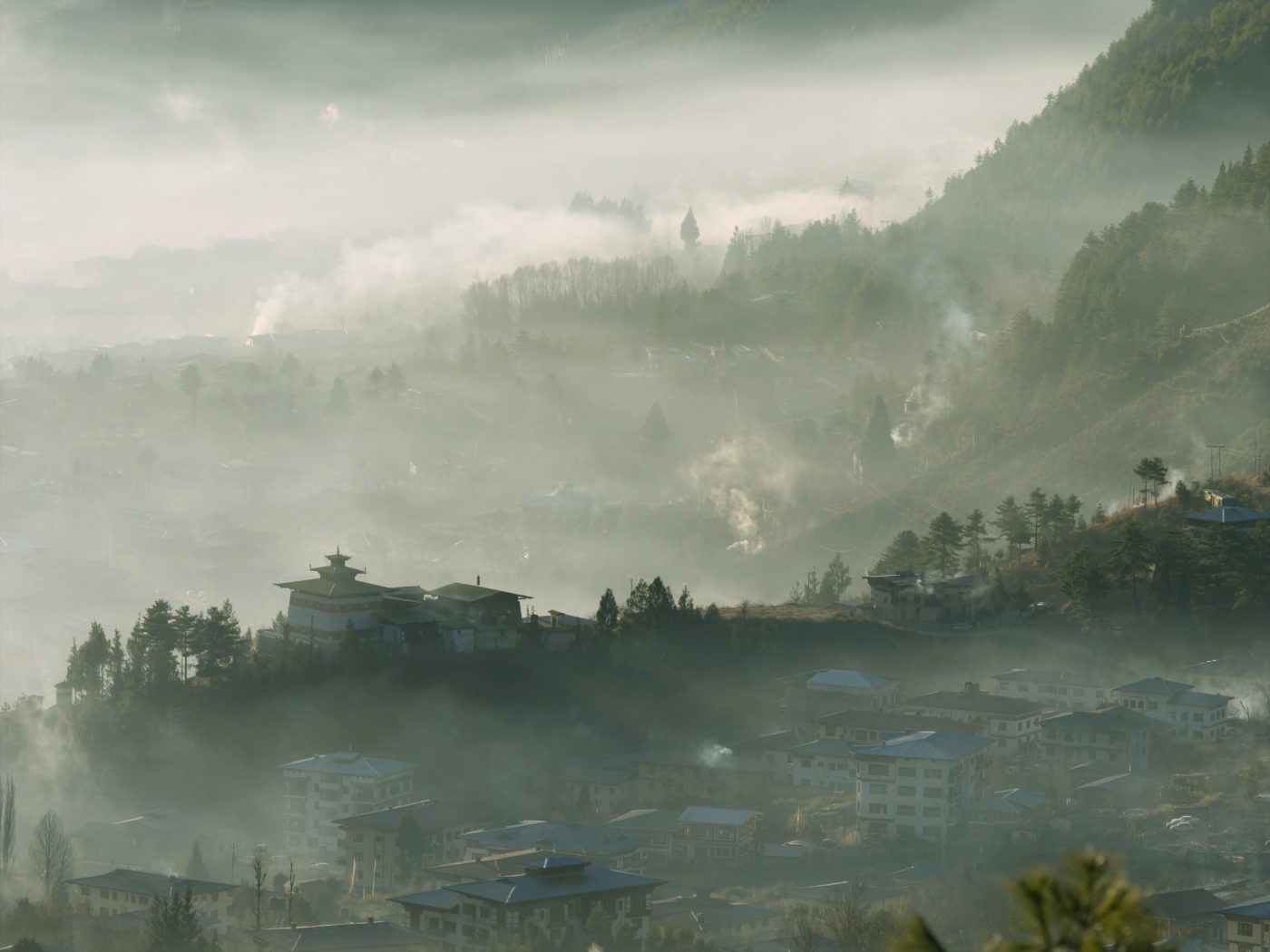 Bhutan reveals these factors in the smallest, and biggest ways. Before arriving at the country’s only airport in Paro, Mount Everest comes into immaculate view. Within moments the plane descends onto one of the most challenging landing strips in the world – peaks rising up to 16,500 ft. surround it and then that notorious turn to touch the plane down. “You know only a handful of pilots are skilled enough to do this landing, right?” said Karma Dorji, the flight attendant on Drukair (in Bhutan there is no last name, everyone has two names). “It’s a great honor for us, to know that the pilot is the best in the world.” (When last did you hear that on a flight?) 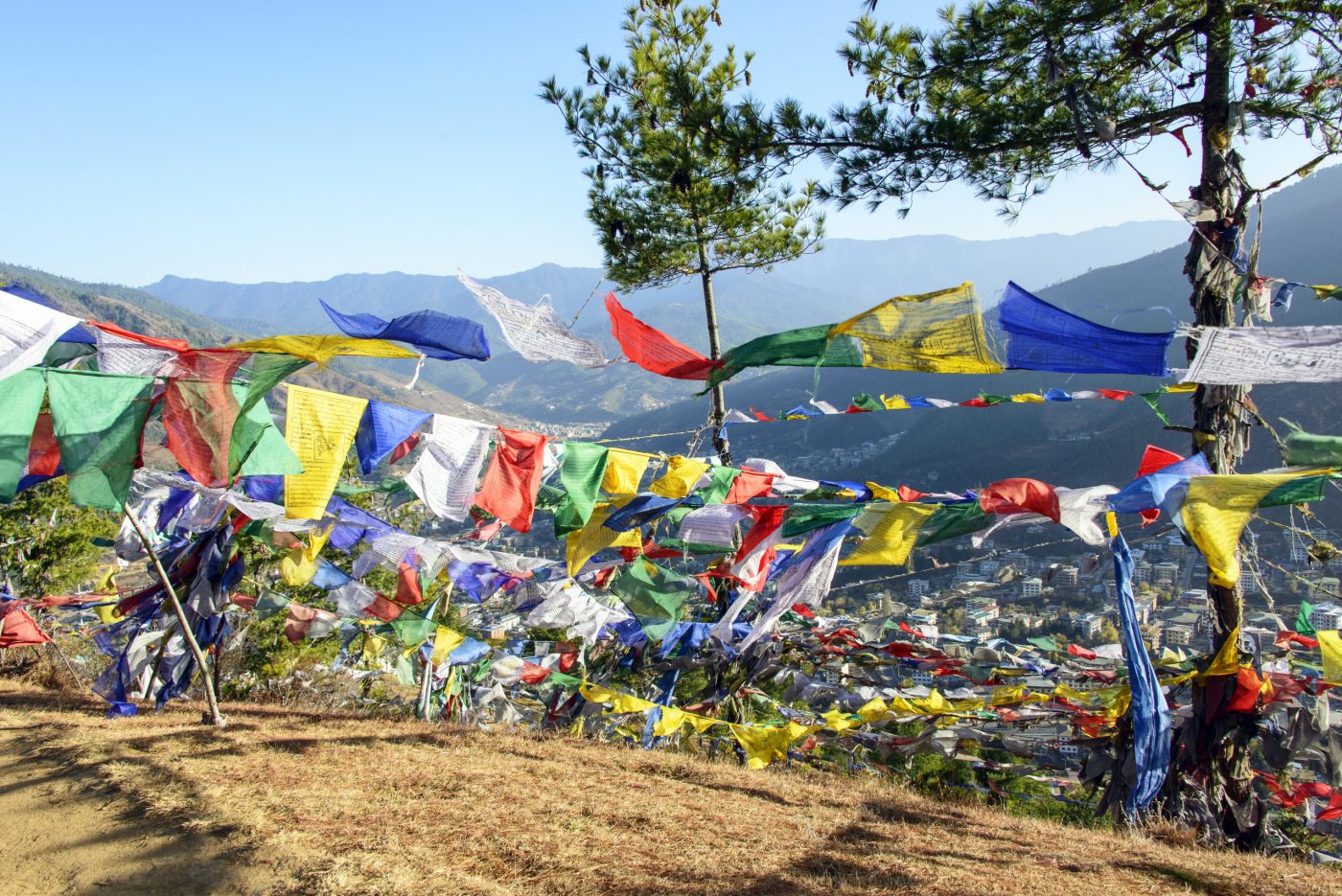 View onto Thimphu City from a nearby mountain

The country is squeezed between a global giant, China (who they are mightily weary of), and India (who they are friendly with) but remains autonomous in all their dealings. The first evidence of their somewhat insular world is their national dress – from the moment you set foot on this holy land, almost everyone is robed. Men wear a knee length robe called a “Gho” that is tied at the waist and has a pouch (for food, a small dagger and, today, for an iPhone) and women wear a “Kira” which is ankle-length, plus a light outer jacket. Some younger kids wear modern clothes, but as my guide, Sonam Wangchuck, told me en route to the first of five Aman resorts, “Teenagers are the same everywhere, right?”

The Aman has created a way to see almost the entire country, with five equally beautiful dzong-inspired resorts placed throughout in a circuit formation. The five are dubbed Amankora, which combines “aman,” the Sanskrit word for “peace” and “kora” meaning “circular pilgrimage” in Dzongkha, the Bhutanese language. 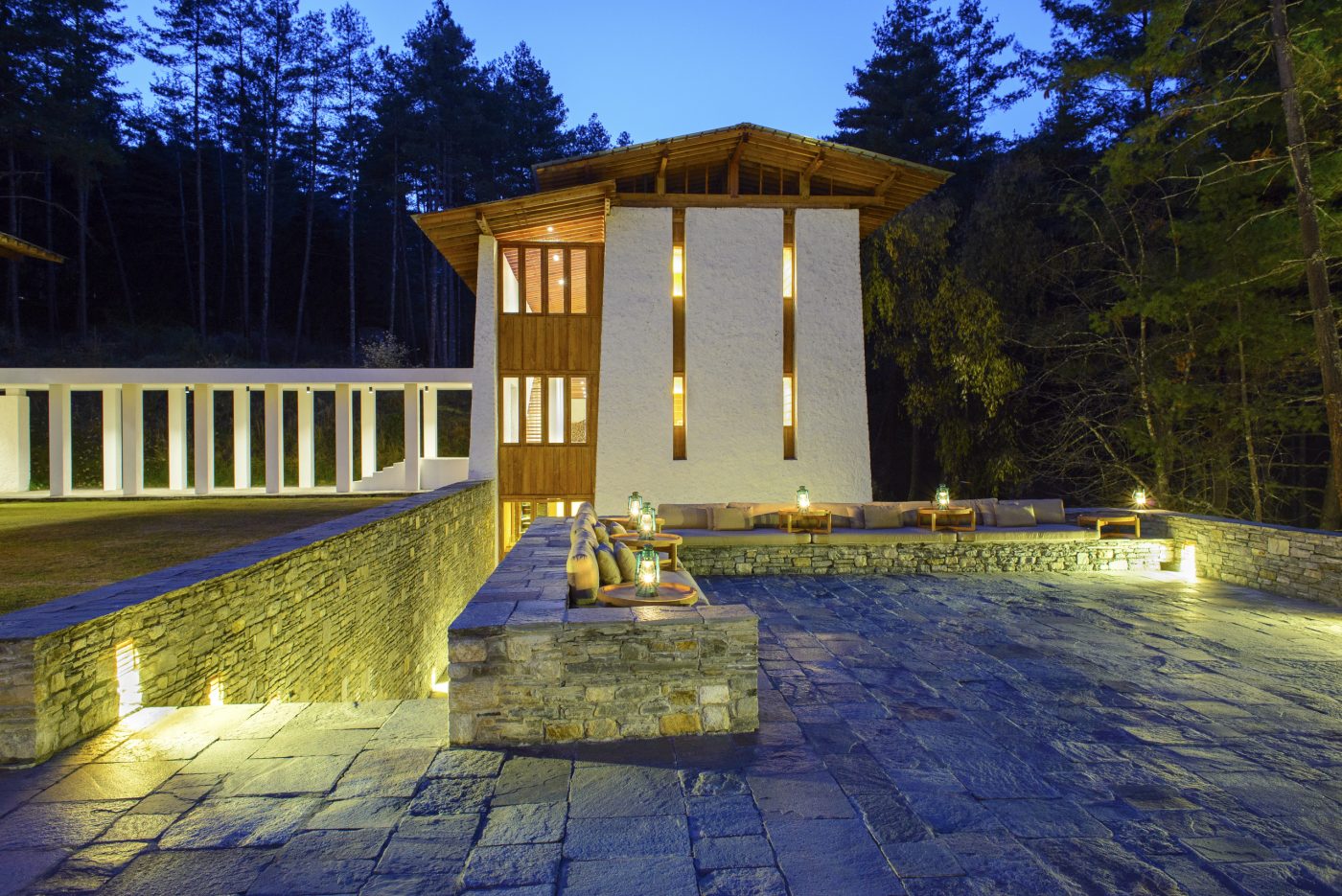 Sonam and I chatted more about happiness and he revealed that for him, and his family, they live a life where “their dreams aren’t crazy big, they’re just the right size for finding them.” And as John Reed, an Aman Resorts Regional Director, but also a bit of a prophet said, “you come to Bhutan to understand respect for others.” 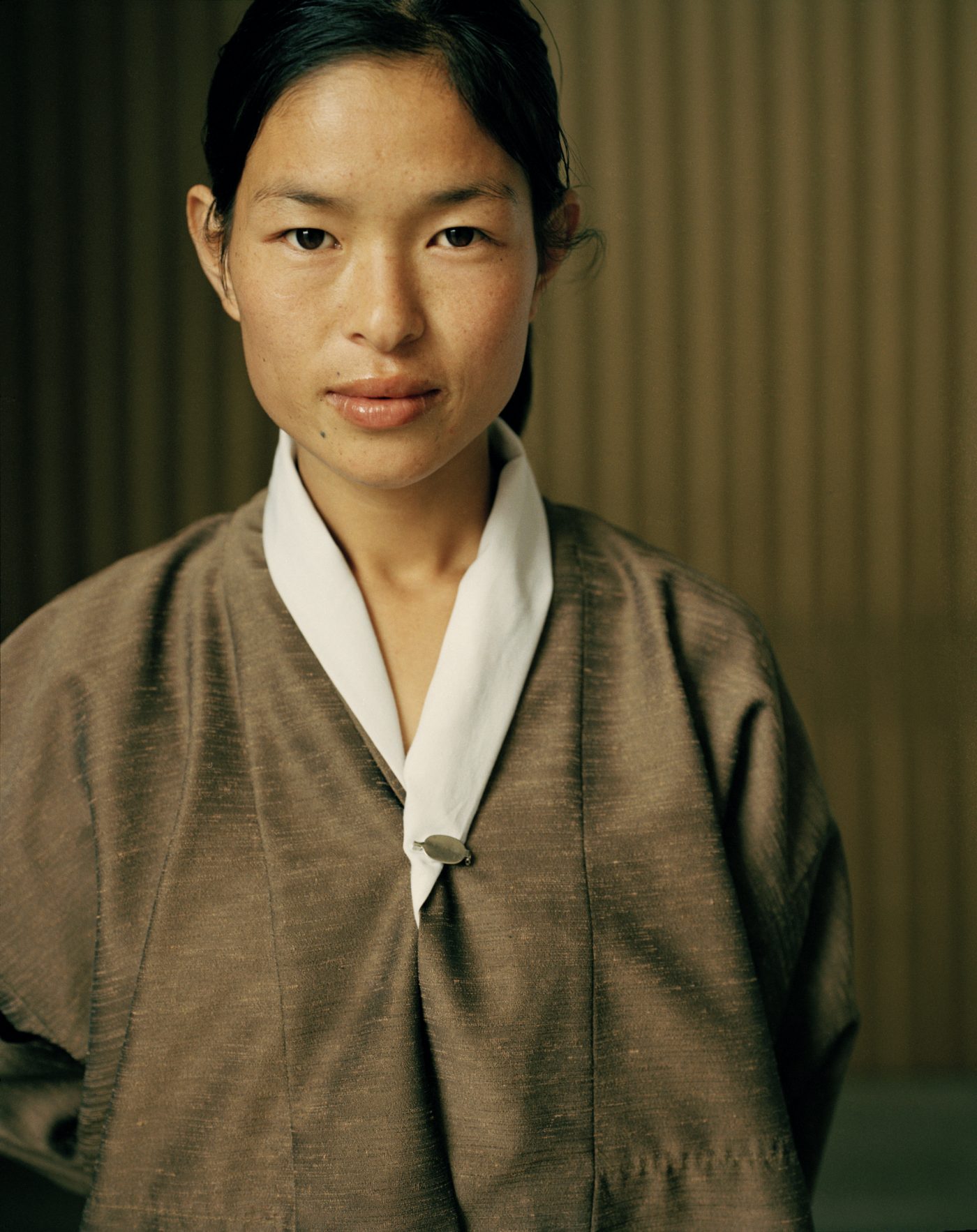 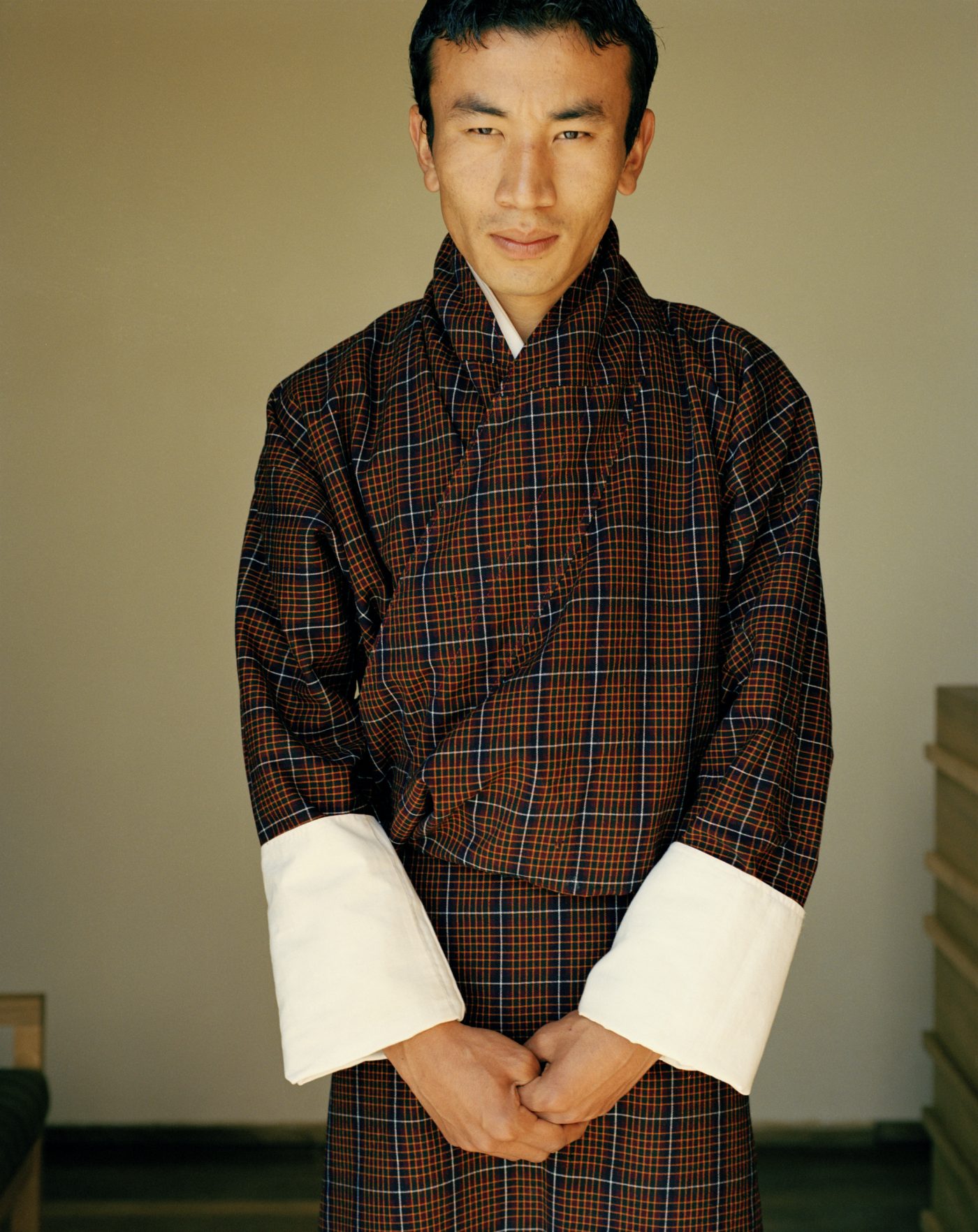 The country itself feels like a perfectly sized dream. Opposed to a dictatorship style monarchy or a figurehead royal system, here Jigme Khesar Namgyel Wangchuck married a “commoner” and runs his country according to “Kidu”, a tradition based on the rule of a Dharma King whose sacred duty is to care for his people. Then there is the modern school system with free and universal primary education and even free health care – it’s also the only country in the world where smoking is completely banned. And as Sonam told me, “we’re a country where the King makes sure that nobody ever has to suffer.”

And from the outset there seems to be no suffering, at all. It’s also all just so iconically beautiful and marvelously peaceful. The statistics are hard to verify but at 30 miles an hour speed limit, it would seem logical that fewer car accidents occur. Sonam didn’t even understand when I asked him whether people drink and drive – “why would anyone do that?” And so again, it’s really in the small things. 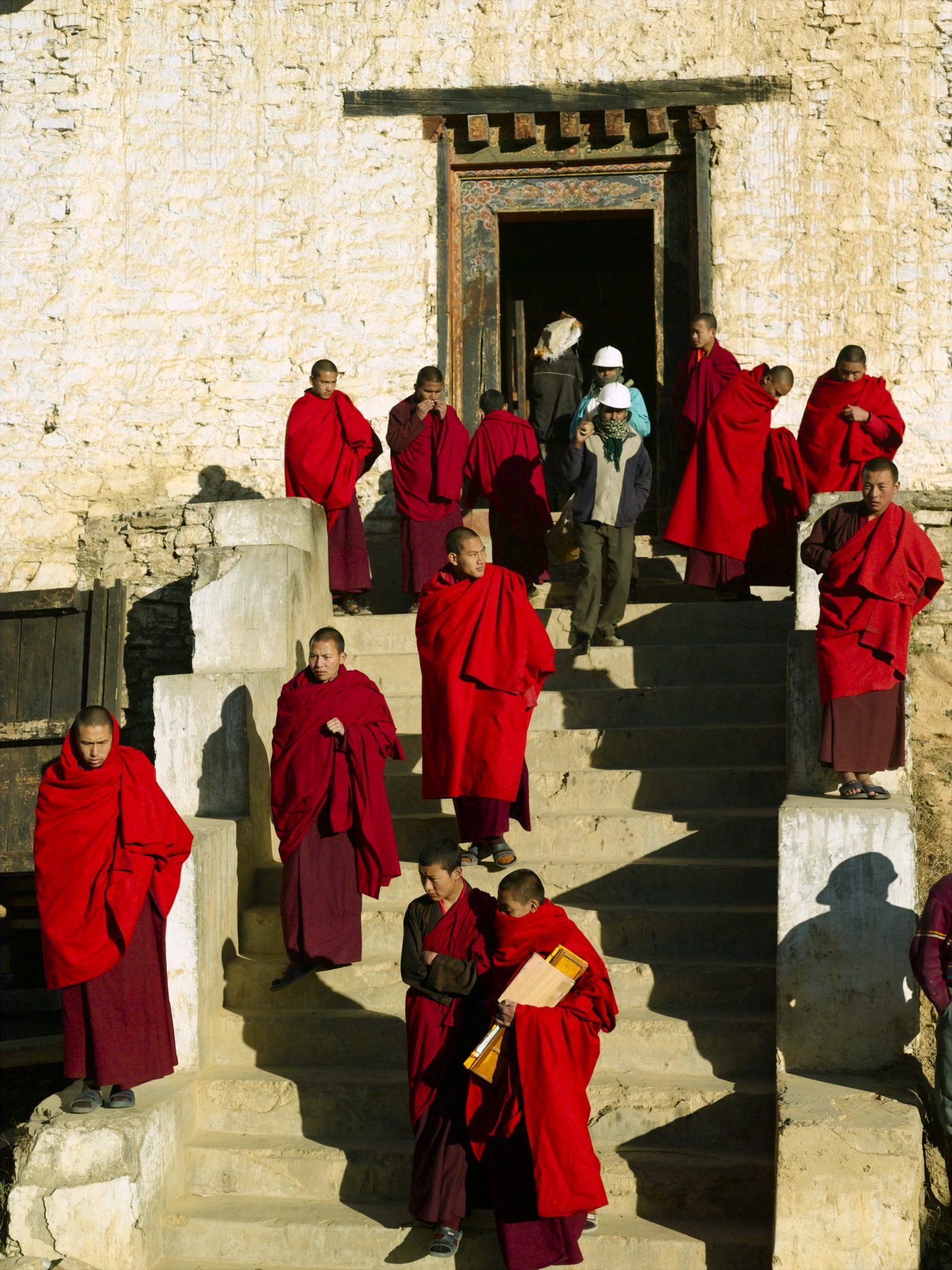 But then, also in the breathtaking big things, like hiking to Tiger’s Nest. The most sacred monastery in the country sits, literally perched, on a cliff in the fluffy clouds. Its name is fundamental to understanding the country’s reverence for Buddhism. The legend says that in the 8th century Guru Rinpoche flew to here from Tibet on a back of a tigress (a manifestation of his divine consort). His reason for visiting was to subdue a demon and he then eventually decided to live in a cave here for three years, three months and three days whilst meditating. And in 1692 this is where this iconic monastery was built.

Day to day life here is simple. Some people work in the small cities (the bigger ones are Paro and Thimphu) and it is mainly agriculture, forestry, tourism plus the sale of hydroelectric power to India that keeps the country’s economy going. But most people embrace a gentler life, one where Buddhist values are adhered to and families do almost all activities together. Having lunch at a local’s home, the entire family piped in to eat broth served with their national dish (a stewy cheese and peppers mix served with Bhutanese red rice). Everyone sat on the floor and before the Tsheringma herbal tea was served, everyone shared their favorite story of their day. How’s that for a Hopeful Moment?

Fresh produce markets are quietly filled with local people buying their goods, chatting about the broths they are going to be preparing at home. And so here we have people at their finest, belonging to a world order of togetherness, acceptance and even tolerance – something that a tiny country like Bhutan (with mostly a somewhat homogenized population of Bhutanese people) is able to take great pride in. The rest of the world could do with some lessons.

And so Bhutan, with all its harmony and quiet beliefs functions within the world as its own world. The Buddhist prayer flags, in their iconic red, blue, yellow and green colors, are littered throughout the country – every bridge, tree and street has them breathing in the mountain air and flapping out of pure joy. Somehow that’s the metaphor for the country, people might be somewhat different but yet attached to some greater ambition for the world.

Some may even call that some kind of happiness. 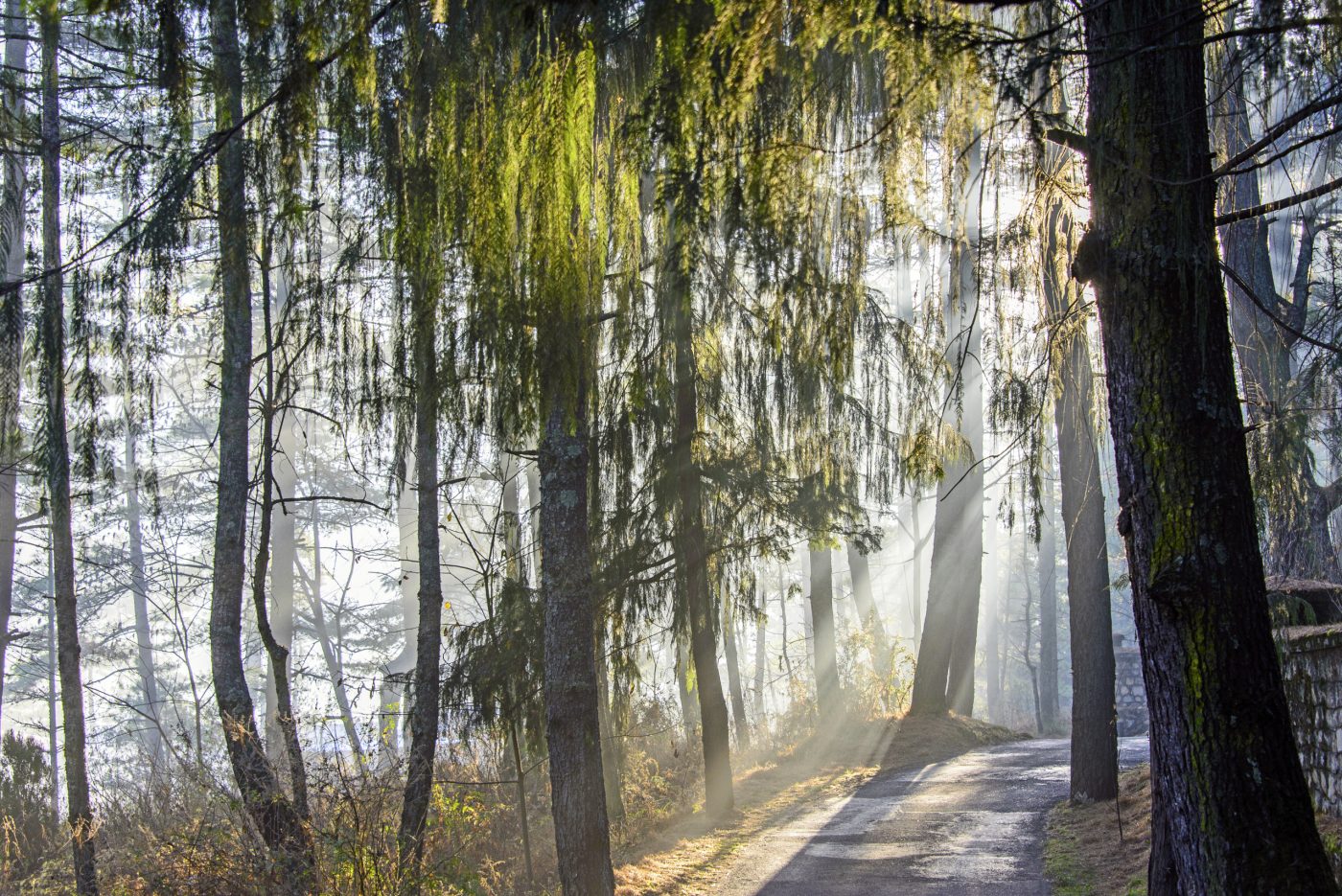 How to make it happen

Bhutan believes in “low impact tourism” and therefore restricts their intake of tourists. A visa process and approval needs to be organized (not complex, just necessary). For instance, something to consider is that there is a minimum spend per day in the country etc. – more information is available here: www.tourism.gov.bt/plan/travel-requirements 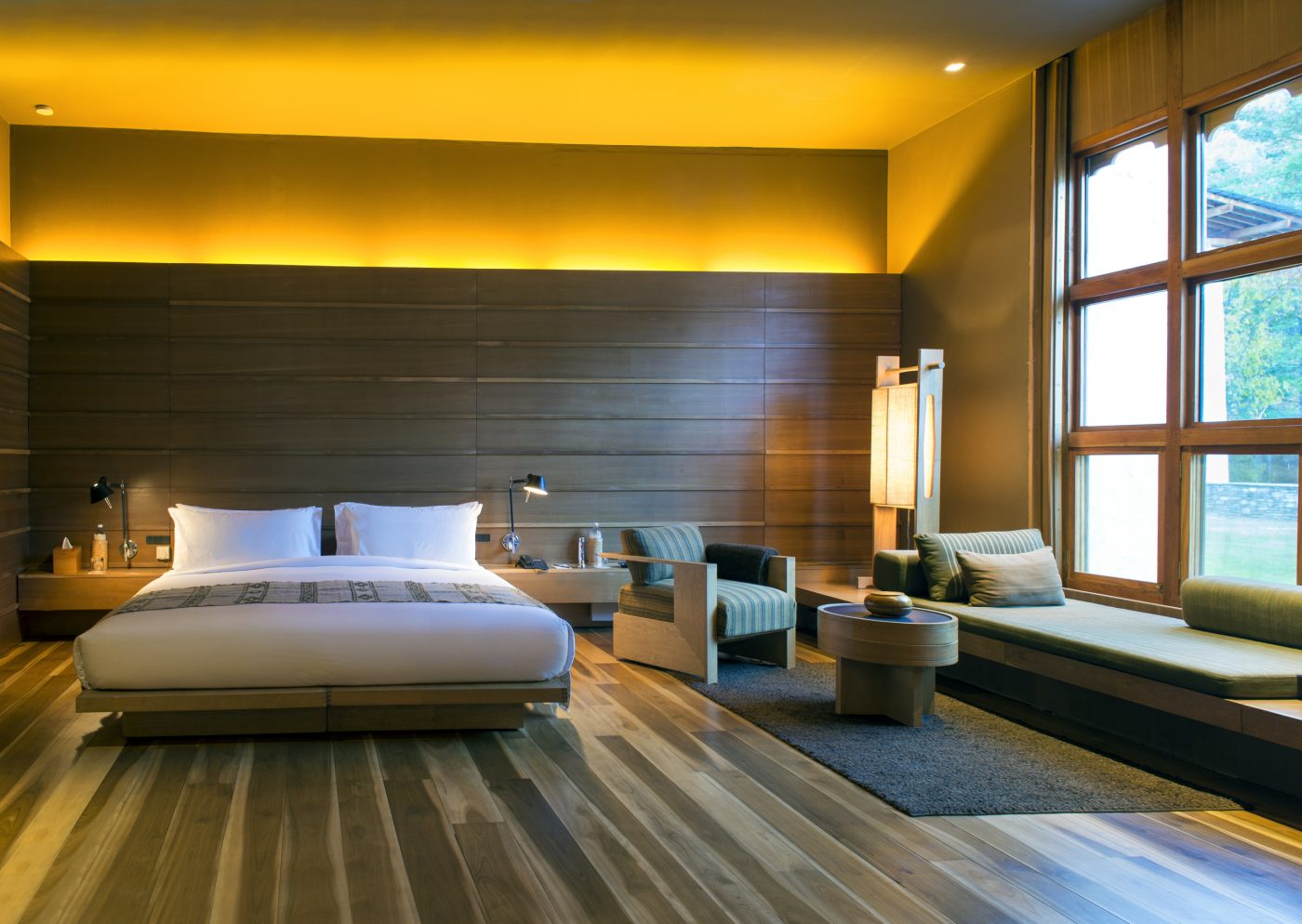 A suite in the Aman Thimphu Lodge. Staying here would not suck, would it?

Far and away the best, most magical places to stay are the Amankora. Quietly placed in the central and western valleys, this rare circuit of 5 graceful lodges serves as a pilgrimage within the Kingdom of Bhutan. An intimate, unobtrusive experience that is the pinnacle in the discovery of unharmed nature. www.amanresorts.com

Or use Bhutan Airlines from Bangkok or New Delhi, also to Paro International. www.bhutanairlines.bt

Not to be missed

Basically everything, but Tour of the Dragon is a bike ride across the entire country through valleys and up spectacular mountains. www.tourofthedragon.com