When you’re in search of black history in a metropolis, you’ll likely find yourself at a museum, or a very specific part of town that clings to the past and shines a light on it with a plaque while the rest of the world around it tries to move forward by not looking back.

In The Big Easy, black history and culture remain firmly entrenched in every crack and crevice. Every bass note that pounds in your chest, every whiff of a masterful Creole concoction and every street corner bustling with life, music and libations are a living, breathing exaltation of the city’s past.

From Jazzfest to Mardi Gras and the rich and ridiculous traditions that come with them, the unique flavor of New Orleans would be without…well, flavor, without its rich black history.

While New Orleans, too, was built on the bedrock of slavery, the city also had the distinction of having one of the largest populations of free people of color in the 18th and 19th centuries when slavery was at its peak in North America. These free people of color — consisting of both slaves that were able to buy or bargain for their freedom or were freed after the Civil War — set down roots in New Orleans and formed the oldest black community in the United States in Tremé.

Tremé became — and remains — the focal point for the African-American community in New Orleans, and invaluable and universally beloved aspects of black culture were born in this stretch of town northeast of the city’s affluent French Quarter.

Slaves that were given Sundays off congregated in Tremé’s Congo Square. There, they formed markets, sang, danced and played a style of music that incorporated Creole stylings and native African beats, that would eventually morph into jazz. And fittingly, Congo Park would eventually evolve into Louis Armstrong Park, named after the jazz legend who made his bones playing in brass band parades on the city’s streets and in local honky tonk bars. (Little known fact department: Jazz got its name from New Orleans’ brothels. Early in the 20th century the local colloquialism for sex was “jazz” and hence the music musicians played in the brothels at the time in New Orleans became known as “that jazz music.”)

Outside of the streets of Storyville and Back O’Town where Armstrong played with fellow jazz legends like Kid Ory and Joe “King” Oliver, he honed his craft and got his first real gig touring outside of New Orleans aboard a riverboat named Sidney with Fate Marble and his band.

While Armstrong would leave New Orleans in 1922 for Chicago, and would spend much of his time there and in New York, his legacy was cemented in New Orleans. And the city was always a part of him. “Every time I close my eyes blowing that trumpet of mine — I look right in the heart of good old New Orleans,” Armstrong once said. “It has given me something to live for.”

Now, millions around the world flock to New Orleans to bask in its rich cultural glow and for festivals like Mardi Gras and Jazzfest. Most of those visitors are also blissfully unaware of how the traditions they’re partaking in are what they are because of the city’s black community.

While Jazzfest’s ties are slightly more obvious, as the festival’s own website bills it as a celebration of “the indigenous music and culture of New Orleans and Louisiana…”, it’s New Orleans’ Mardi Gras that’s steeped in history that’s uniquely African-American even though its origin is French.

One of the festival’s most notable and historic parades is the Krewe Of Zulu parade, which takes its name from Africa’s Zulu tribe. The Zulu group first marched in Mardi Gras as early as 1901, before becoming an incorporated krewe in 1916.

It wasn’t until 1968 that Zulu was able to take a more mainstream parade route that didn’t limit them to Tremé and other typically black neighborhoods, which allowed them to showcase their African roots and unique style, including their famed Zulu Coconuts, one of the ultimate prizes thrown from floats during Mardi Gras.

Their route and parade — regardless of how popular it’s become — still goes through the heart of Tremé, Louis Armstrong Park and Congo Square before making its way onto Canal Street by way of Basin Street.

Oh, and that Armstrong guy once served as King Zulu in 1949, which was kind of a big deal as well.

In 2001, New Orleans International Airport was renamed Louis Armstrong International Airport, which is fitting considering how many people come from far and wide to the city for Jazzfest and Mardi Gras; events that pay homage annually to Armstrong and all those who gathered at Congo Square on Sundays to celebrate their heritage and gave the city its soul.

For more of our series on Black History Month, click here. 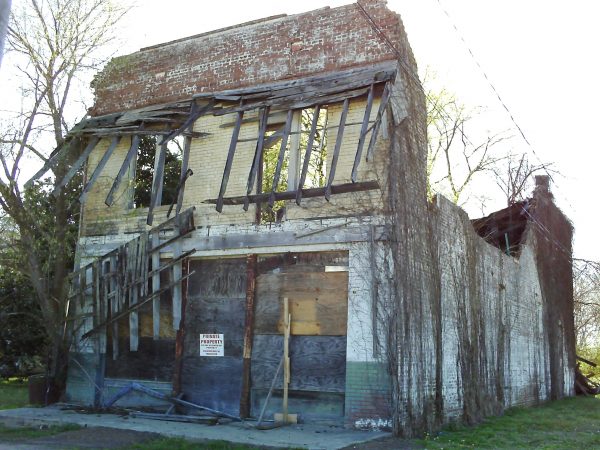 What remains of Bryant's Grocery and Meat Market