A few years ago, Ben paid a visit to the Hard Rock Casino in Las Vegas. Looking for a little action, he decided to try his hand at blackjack. Not the tables you and I might be accustomed to, but the high roller tables. Where the sharks swim. He did well. Actually, more than well, he beat the house.

Affleck was winning so much that it drew the attention of the nearby pit bosses, who, taking their orders from the eyes in the sky, finally decided that his time was up. They politely asked him to leave. Forever.

The star of Armageddon and other classics was thereby banned from the Hard Rock blackjack tables, effective immediately. But why? Was he hiding an Ace up his sleeve? Was Matt Damon sending signals from across the way? Nope. Affleck was accused of counting cards. According to sources (cocktail waitresses who love to gossip), Affleck’s uncanny ability of numerical acumen allowed him to know when to hit and when to stay, when a face card was due to be drawn, and, most importantly, when a dealer was going to bust. (If only he could pick scripts with such discernment!)

Now, in the past, Affleck had proven himself a great card player. No stranger to the World Series of Poker, Affleck has had fortuitous blackjack streaks before; once earning nearly a million dollars at twenty grand a hand — at the Hard Rock. Needless to say, he was on their watchlist.

Card counting isn’t illegal, per se. Affleck faced no penalty or fine; in fact, he was allowed to keep his winnings. The only price he paid was, perhaps, damage to his reputation (lol) and he couldn’t redeem his coupon to the buffet. He was even given a limo ride back to his hotel. Yet any true gambler knows, you never leave a hot seat. Unless, of course, a security guard asks you to.

Affleck has said “That is a true story… I took some time to learn the game and became a decent blackjack player … The fact that being good at the game is against the rules at the casino should tell you something about the casino.”

Yeah, it does. It tells me they want to hold onto their money.

It turns out a casino, a corporate entity, can expel anybody they deem too smart for their games. Sound fair? No, it doesn’t. Sounds a little Big Brother to me.

So, what other infractions can these neon-lit authoritarians give you the boot for? Turns out, plenty.

Casinos are constantly on the lookout for out-of-the-ordinary behavior: the slot machine that’s “too hot”, a player switching dice at a craps table, even players marking cards with an invisible ink that can only be seen with special glasses. That’s straight out of a James Bond movie!

But quite ordinary behavior can get you in hot water too. Say you just won big at Pai Gow Poker and you wanna Instagram that big stack of chips. No dice! Cell phone use is a no-no at the table. Taking photos of the gaming board will get you a swift trip to the exit.

I know it’s tempting, in our social media-obsessed culture, to let your friends and family know you just hit pay dirt. “I have 400 followers; where are my privileges?”, you (understandably) cry out. But for all the casino knows, you’re sending this info to the Artful Dodger. Do yourself a favor and wait to go Facebook Live in the comped penthouse suite. It’s hard to line up the dog ears filter when you’re being tossed out onto the street.

Maybe you and yours are commandeering the roulette table, making it rain to use the parlance of our times. But you’ve already busted. Your main dude feels sorry for you and tosses you a chip — only a five dollar one, say, but charity is charity. Next thing you know you’ve got Joe Pesci breathing down your neck. Nobody is allowed to gift gaming chips to another person at the table.

Most recently, former NBA superstar Charles “The Oak Tree” Oakley was given the hook by the Cosmopolitan on the Strip after trying to pull back into his fold a Hundo chip once he saw he was gonna lose it. Well, this is sort of a no-brainer. Not that I’m gonna be the one to tell the 6’8’’ Oakley he has no brain. I’ll leave that to the Vegas judge — the penalty for such an act is a possible 1-5 years in prison. Or, perhaps, another enforced stint playing for the Knicks.

Finally, being an obnoxious drunk is a surefire way to cut short your stay. This seems like another ‘duh!’ Except that I’ve seen somebody be told they couldn’t even enter the casino because of intoxication. At least that’s what happened to my friend Jim.

This happened about twenty years ago, during spring break from college — my friends and I were poker nerds more than beach bums — at, ironically, The Hard Rock Casino. Just as we were about to enter, a security guard stood between Jim and the entrance. He pointed to the six-pack of Busch tall boys Jim was holding and told my friend that he would have to discard those beers if he wanted to enter. Not one to waste good, watered-down domestic beer, Jim took a seat on the curb, and began to polish off those brews. The rest of us left him to it. I walked around admiring the casino’s collections of glass-encased guitars from rock stars who hadn’t been popular since my dad went on Spring Break. While I took in Billy Squirer’s Don’t Say No-era immortal axe, I couldn’t help but think that the real rock star was sitting outside, Indian-style drinking the night away.

At the Westgate Hotel’s upscale eatery, the steak is maybe the town’s surest bet 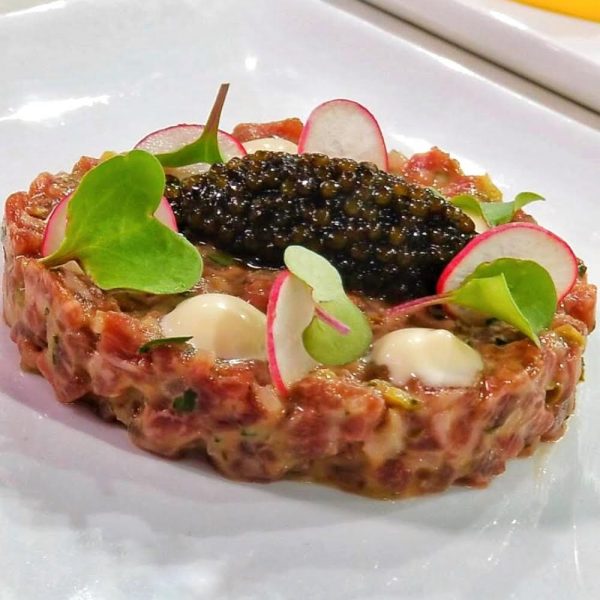