Organized crime in Las Vegas was pervasive in the mid-20th century, as the then evolving casino business replaced the loss of their Prohibition-era crime business.

And more than once it culminated in some guy who drew the wrong straw getting whacked.

The National Museum of Organized Crime and Law Enforcement (in Las Vegas, of course) is a repository of all things related to the dark days before the corporate, legal, mobs took over. The museum even houses the courtroom used for the famous Kefauver hearings on organized crime, which were held across the country and for one day in Vegas, on November 15, 1950. (The Museum is the former Federal Courthouse.) This was a morbidly fascinating event carried on TV and watched by more people than watched the World Series that year.

These are the classic whacks… 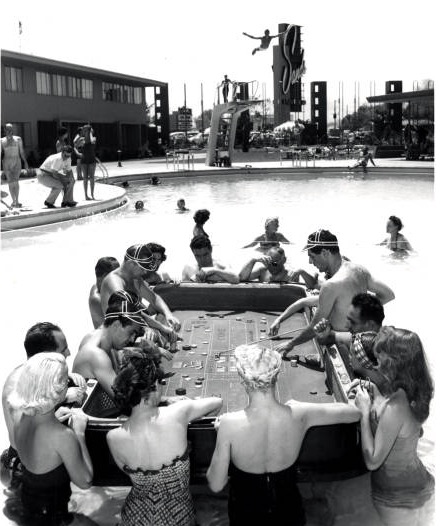 Bugsy, the ringleader of the Murder, Inc. syndicate, was reported to have been shot — 9 rounds from a .30 caliber M1 Carbine rifle— through the window of his girlfriend Virginia Hill’s Los Angeles home, while he was sitting on the couch reading the newspaper. He was 42 and had notoriously run Vegas. Who killed him remains contested. Nick Pileggri’s Story of the American Mob conjectures that the shooter was Virginia’s brother, Chick Hill. Apparently Siegel was caught skimming money from The Flamingo Resort, and the hit was ordered either by his associate Meyer Lansky or Mafia boss Jack Dragna.

In 2014, Los Angeles Magazine’s Amy Wallace interviewed the son of Bugsy’s confidant Bee Sedway, the wife of Siegel’s business partner Moe Sedway, who took over The Flamingo after Seigel’s death. According to an unpublished manuscript by Bee, Siegel had threatened Moe’s life because he was unnerved by how much power Moe had accrued. When word got back to Bugsy that his childhood friend Moe had ordered his execution, Bee called her lover Matthew “Moose” Pandza to take out Siegel, in order to save her husband.

Tony the Ant was leader of the Chicago mob’s Las Vegas syndicate and the inspiration for the movie Casino. It was reported Spilotro killed 26 people, (including Jerry Delman, Marty Bucceri, Rick Manzi, and Red Klimm, if you must know) but he was never convicted. Spilotro’s attorney, Oscar Goodman, who had an uncannily successful track record defending gangsters, would go on to be mayor of Las Vegas.

Placed in the mob’s infamous black book in 1978 — apparently not a book you want to get placed in — and banned from Las Vegas casinos, Spilotro continued to be pursued by local and federal agents, along with the rest of the Hole in the Wall Gang, who were eventually arrested, for burglary in 1981. But Spilotro wasn’t arrested, and he and his brother Michael were eventually found buried in an Indiana cornfield. The Chicago syndicate didn’t appreciate all the press Spilotro had brought upon himself, so beat and strangled him and his brother in a mass hit of a dozen mobsters in June 1986—after having called them up to Chicago for a conference.

At The Family Secrets trials, mobster-turned-informant Frank Cullotta, gave up James Marcello as the assailant in the Spilotro murders. Marcello was sentenced to life in prison.

Once the bodyguard and henchman for his childhood friend Tony Spilotro, loanshark and part of the Hole in the Wall Gang, Blitstein’s murder amped up an FBI investigation — Operation Thin Crust — that would indict 50 mobsters. Blitzstein was shot in the head allegedly by either Antone Davi or Richard Friedman (for $3,500 — life is cheap!).  This came after he was first robbed by Peter Caruso. Bad day all around.

The hit was planned by Louis Caruso (no relation — confused yet?), who sought control of Blitzstein’s loansharking business.

A labor leader and president of the local 226 chapter of the Culinary Worker’s Union, Bramlet was known for bombing restaurants in Vegas that refused to unionize. A failed bombing attempt in 1977 led to his  murder by the hitmen who he’d hired (and stiffed) to do the job: father-son team Thomas and Gramby Hanley. They held Bramlet at gunpoint as he deboarded at the McCarron International Airport, before shooting him in the desert where he was found three weeks later.

Special Agent Coulthard, who ran the FBI Las Vegas office from 1939-1945,  was also a stakeholder in the Horseshoe Casino (today home of the World Series of Poker). Allegedly, he refused to renew owner Benny “The Cowboy” Binion’s lease. According to the Las Vegas Sun, Coulthard was a partial owner of the land on which the Horseshoe was located. He was blown up starting his car on the third floor of the Clark County parking garage after leaving work. Understandably, Binion was suspected for planting the bomb that killed Coulthard and burned several surrounding cars, but was never charged. Coulthard was an attorney at the time of his death.

A cabdriver who planned to kidnap Benny Binion’s son Ted, Shumate was ratted out by a fellow cab driver and co-conspirator. He was found in the mountains overlooking Las Vegas, having been shot in the head and chest. Once again Binion was the prime suspect for ordering the hit, but was never charged for this either. He himself died in 1989, so now we’ll never know for sure… 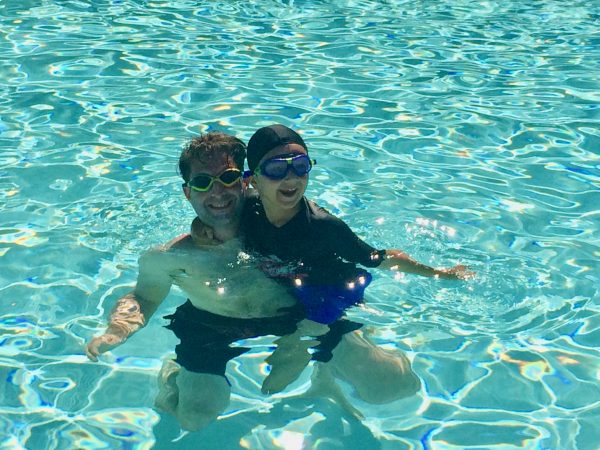 Let the good times swim! The author and his son enjoying the pool at the Orleans