I have a thing about standing in line for a table at a restaurant. I won’t do it. I refuse to do it. There is no food in Western Civilization worth standing in line for. Not even donuts. On occasion, however, I will make a mistake. Here’s how that works: you’re in Lisbon on a Saturday, around noon o’clock, severely hungover because you drank a lot of porto the night before, or probably drank a lot of porto — it’s the national drink of Portugal and you are nothing if not scrupulous in your adherence to local norms. Anyway, you drank a lot of something. You roll out of bed looking for food as a balm for your pickled gut. There’s a modest-looking seafood restaurant right around the corner — like fifty yards from the door of the place where you’re staying. You’ve been traveling around Europe for two months on assignment for an unnamed travel site (rhymes with Thunderbust) and you’re tired of looking for exotic experiences. You just want a decent meal with no fuss. You are absolutely not in the mood to wait in line for your meal, even if it weren’t already a well-established thing-you-don’t-do.

You walk in the door of Cervejaria Ramiro and there’s only two couples in front of you waiting for a table. No problem. Your party of three should be seated within seconds. Or minutes. Or at least in the next half hour. Or within the hour. Or… dear God, how long have we been standing here next to this live lobster tank? It is an awfully big tank, and there are some awfully big lobsters in it. Busy staring at the giant lobsters, you don’t notice the time passing. Classic lobster tank gambit.

Turns out that Cervejaria Ramiro is famous for its lobsters. Anthony Bourdain featured the place on one of his television shows. People will line up not just for hours but for days to be seated at this lobster palace. (I may be over-selling the lobsters here; better provide a picture of the one I ate…) 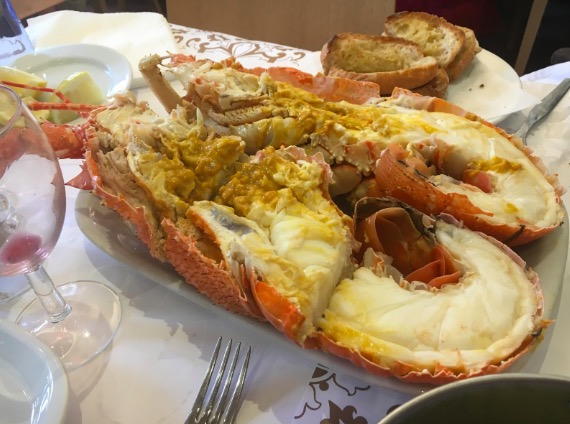 That is one hell of a lobster***Jim Greer***

In fact I’d lucked out. I’d all unknowing stumbled through the door of what is possibly Lisbon’s finest eatery just before the brunch rush. Or brush.

Though it took twenty minutes or so for me and my companions to be seated, when I turned around to complain about the wait I noticed that the line to get in now stretched out the door and around the block. Those people — I have no idea what happened to them — they might still be there. I can’t do anything for them now. It’s too late. God forgive me.

It was worth it. Cervejaria Ramiro offers much more than lobster, obviously, but that’s their calling card. It’s an unpretentious, unfussy place where the waiters are always rushing around but somehow never seem to be in a hurry. We had a bucket of steamed clams — the waiter overrode our initial choice and pointed to another variety as “much better,” and he wasn’t upselling, either — his choice was cheaper. He also picked our wine, an unspectacular but extremely serviceable Spanish red, and before presenting our cooked and split lobster brought the wriggling and monstrous specimen to our table for our approval. The lobsters are priced by weight, and because ours looked like it had recently eaten several other lobsters, it was not cheap. You might be in for a slight case of sticker shock if you plump for the plumpest lobster in the tank, and if your math doesn’t do kilogams into euros (as mine doesn’t) you can easily end up paying 150 euros (roughly $175) for three people, including wine. 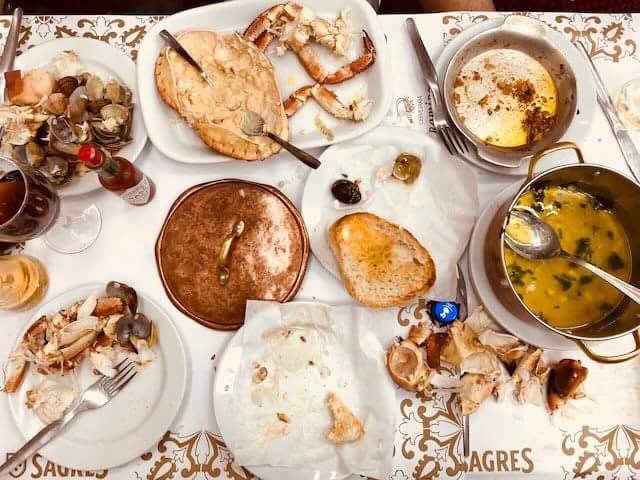 What a feast! And there’s a lot more to it than the lobster***Kevin McLeod***

Our waiter refused to take the lobster away until we had fished out every edible piece from within its armored plates, aided by an assortment of devices that would not look out of place in a lockpicker’s arsenal. He would come by on occasion and survey the damage we’d managed to do, shake his head slowly, and say something like “not bad, but there’s still a lot of meat left.” We took the thing apart until there was nothing left but shell, at which point he finally condescended to remove the remains, telling us that we had done “almost as well as a professional.” He was lying, of course, but I didn’t mind. I’ve never been accused of doing anything “like a professional” in my life and I’m not about to start now.

Also, they give you a lobster bib! I should have mentioned that earlier. But I still wouldn’t stand in line for Cervejaria Ramiro. Not on purpose, anyway. I’m nevertheless glad that I accidentally did, this one time.