As I’m writing this, I am listening to my favorite Athenian radio station play everybody’s favorite Donna Summer single, the synthesized grooves between every ‘I feel love’ peppered with the DJ’s running commentary in Greek that’s all but incomprehensible to me but still comes as a little ray of light at a time of strange and jarring darkness. It may sound a bit loopy and I haven’t had my daily hit of tsipouro yet but — hear me out — you might say that disco is America’s audio equivalent to the Acropolis. Both are products of another era and each is still standing, the former as the vestige of a rare nationwide exuberance, likely never to be repeated, and the latter a symbol of one civilization’s triumph over a litany of scheming tyrants and nasty invaders. As an American in Athens, it’s almost reflexive that you look for parallels where others may see only columns.

Like most travelers, Americans are drawn to destinations to explore things that they don’t have at home, to suss out how the reality stacks up to the stereotypes: is the Eiffel Tower really that tall? Is the Parthenon really that cool? (Yes.) For the time being and maybe for the foreseeable future these are rhetorical questions, because both are closed. When circumstances step in and freeze daily life as you know it, no one is ever prepared because no one can be. Like New Yorkers, Athenians tend to live in the moment and the instinct is to go out and graze rather than stay home and stockpile.

Greeks are not a people known for doing things in a hurry but as the gods are my witness, the speed with which daily life has changed in Athens is breathtaking. A couple days before the disheartening closure of archaeological sites around the country, I found myself just northwest of the Acropolis at Kerameikos, which I had mistakenly thought of as “only” being the site of the ancient cemetery and ceramic workshops. It was indeed both those things, and rather spectacularly, but Kerameikos was something else altogether and I when I realized what that was it (as well as a pair of really badly-fitting shoes) made me stop in my tracks: it was the site of the Dipylon Gate, the chief entrance to the city in times gone by. 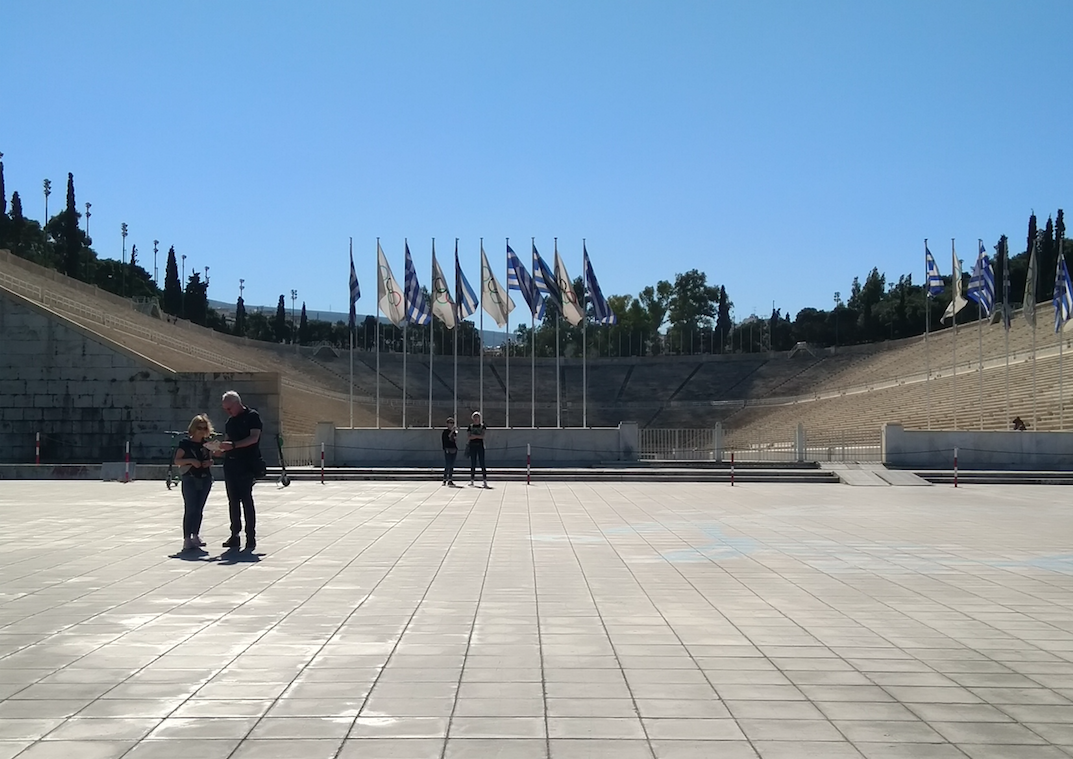 Panathenaic Stadium, the world’s only all-marble stadium is now closed

So I found myself staring at the wide stone foundation of one the four original towers that made up what was at the time the largest city gate the world had ever seen. Walking along the edges of the ancient Athenian fortifications, where Pericles delivered his famous Funeral Oration at the end of the first year of the Peloponnesian War, it was hard to assess what was more sublime: the now sylvan setting itself or the silence that embraced it like a sweet urban perfume, broken only by the occasional honking of a horn from busy Pireos Avenue beyond the perimeter. Sun-baked ruins and traffic jams: it’s a dichotomy Athenians take for granted, but for a Californian whose idea of ancient culture is 1962 it’s really kind of  marvelous.

Now of course, as the lights have dimmed on Broadway and dolphins swim up to Italian ports for lack of maritime traffic, and as much as the world falls into a nervous underworldly hush, there are no horns honking. There are no people in the cafes because all the cafes and tavernas  are shut. No one is smiling anymore and if they are it’s probably by mistake—anyway, can’t see much behind the surgical masks more and more Athenians are wearing (a planeload just arrived from China: no comment). This situation is alarming and new but not entirely without precedent: Athens, like many great cities, has been through an awful lot. The ruins in Kerameikos, in the Agora and elsewhere around the city as throughout Greece and so much of the Mediterranean world are a testament to this, evoking a contrast, as one Getty Museum curator once told me, “between what is lost and what is retained, and between civilization and nature.”

Now it may be as good a time as any to ruminate about things like ruins, which at the end of the day, along with visions of beachside bliss in islands like Mykonos are big drivers of tourism to Greece. Carefree visits to both suddenly seem far off—no more ferries to the islands for a while, it was just announced, unless you can show you’ve got a house there—but “what is retained” is already, in a way, instructive. Thucydides records that in his oration Pericles praised not only the Athenians soldiers but the citizens too for recognizing the need, when it arose, to follow orders for the greater cause. This was an evocation of resilience within the framework of a democratic system that had already set Athens apart from its wildcat neighbors. Along with values like open-mindedness and tolerance, that made it worthwhile going to battle for. By 432 B.C. Athens had already developed as the most prosperous city-state, with all the sites that are now the ruins of postcard fame and poetic pauses reflecting that success. Pericles didn’t omit that from this speech, either. Man knew how to rally the troops. 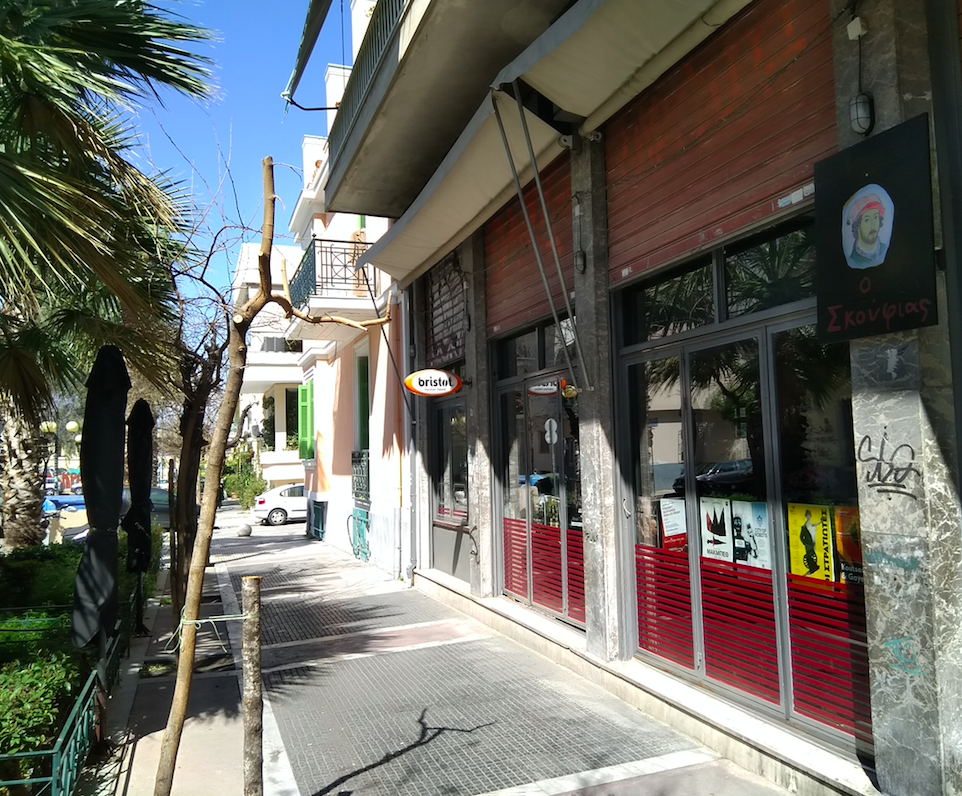 A now empty street in the central Pagrati neighborhood

One thing that has impressed me so much as a foreigner in this great capital is how Athenians have recognized the present danger and are doing their best to adapt accordingly. Mirthlessly to be sure—nobody loves donning a mask and gloves just to enter a grocery store—but resolutely. At anxious moments like this, something monumental like the swearing in of Greece’s first woman president, Katerina Sakellaropoulou, has happened with a minimum of fanfare. Newish, center-right Prime Minister Kyriakos Mitsotakis has recognized the perils now within the city gates and is moving fast. Greece like many another country has its hands full right now, and it’s all hands on deck—even if for now that means skipping all things social and just staying the F home. Hotels are shut down through April, by the way, and tourism here like elsewhere may never be the same. None if this is particularly easy to observe. But something else is coming into view too: an Athenian spirit I confess I never really knew. I’m proud of what I’m seeing and while not one to wear his heart on his sleeve, I (gulp) feel love.