As we wonder if this pandemic is ever going to end, or is just going to keep morphing and linger like some party guest that doesn’t get the hints, it’s actually hard to remember the shock, the eeriness, of our cities and towns shut up, and almost every establishment that made up the fabric of what we would generally call home, closed. We would walk and drive past restaurants blackened and quiet. Other than in warzones, one never saw such stillness and permeating menace.

Happily, we are past the worst of it, even if not all of it. And we can dine out pretty much as we did before. Major city restaurants are again choked with people crammed into tables (pretty much once again crammed back on top of each other) or on hunger-inflaming waitlists. New restaurants are slowly opening again, borne on airstreams of hype.

But the best new restaurant I’ve eaten at in the last two years started in the swirling storm of the pandemic! In the Spring of 2021, Dagon, an ostensibly Israeli eatery, arrived in New York City and, to boot, choose an unglamorous strip of Broadway a couple of miles north from where the action is and a mile or so south of where the smartypants Columbia University kids and their satellite hipsters live. If there was a handbook on how to open a successful restaurant, it probably wouldn’t suggest doing it the way Dagon did. 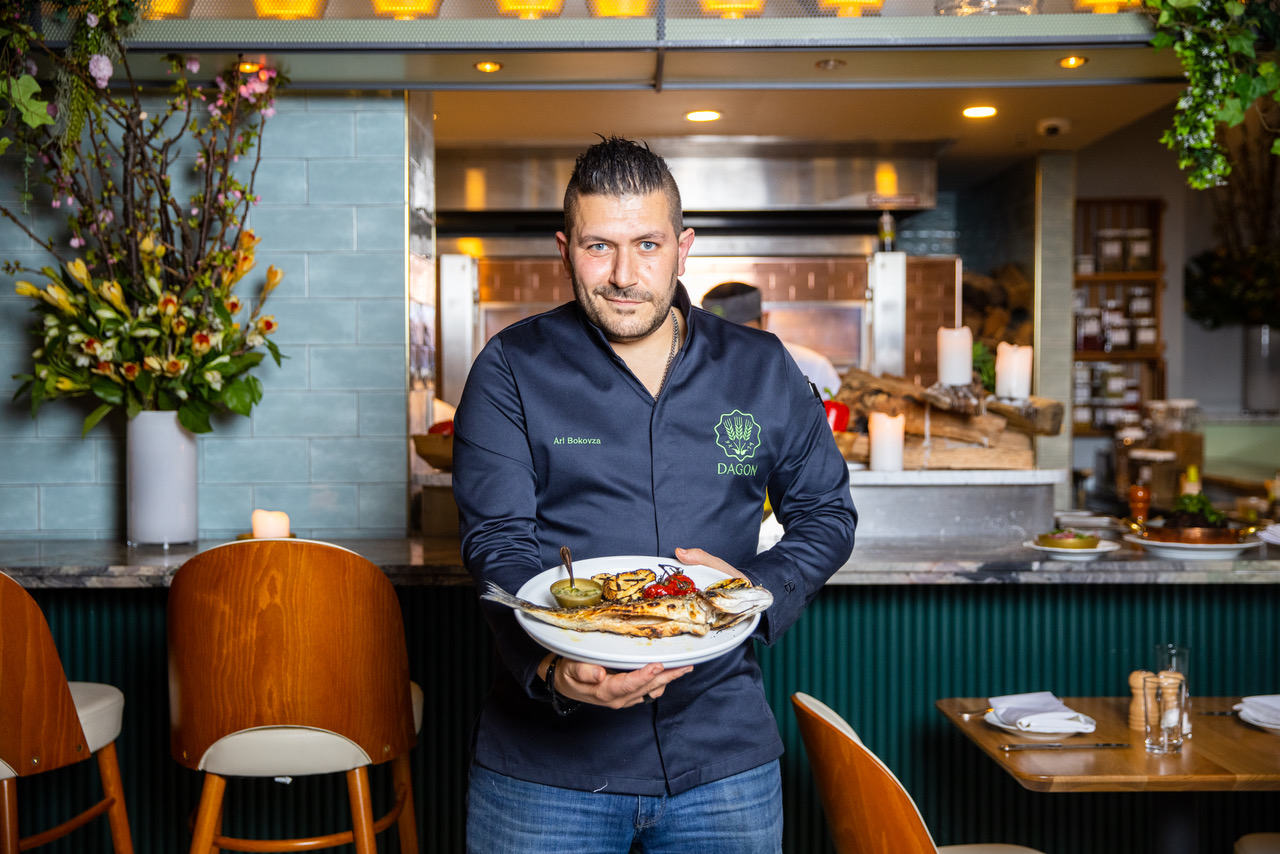 Would you buy a perfectly grilled and seasoned piece of fish from this man? You should!

Which only makes Dagon’s success even sweeter! It’s now one of the hottest reservations to get in NY, and every time I’ve been there the place looks full of happy people (I’ve been to scores of great restaurants where, oddly, not everyone looked happy).

This is a magic emporium of food delights. The genius chef and co-owner Ari Bokovza calls the cuisine “Israeli/Levantine”, meaning the North African and Middle Eastern region surrounding tiny Israel. Ari was born in upstate New York, his father is from Tunisia, and his mother was adopted, but his family’s roots are Israeli. “We wanted to really showcase not just Israel but the region. My grandmother’s from Tunisia, so a lot of the cuisine that I grew up on when I used to visit Israel was her cooking,” he explains.

The decor is hip and comfortable — “honing in on the Tel Aviv party lifestyle” he says, like I didn’t automatically get that. And there is a nicely sprawling outdoor space that resembles a casual Tel Aviv cafe, born in this case from pandemic occupancy regulations. 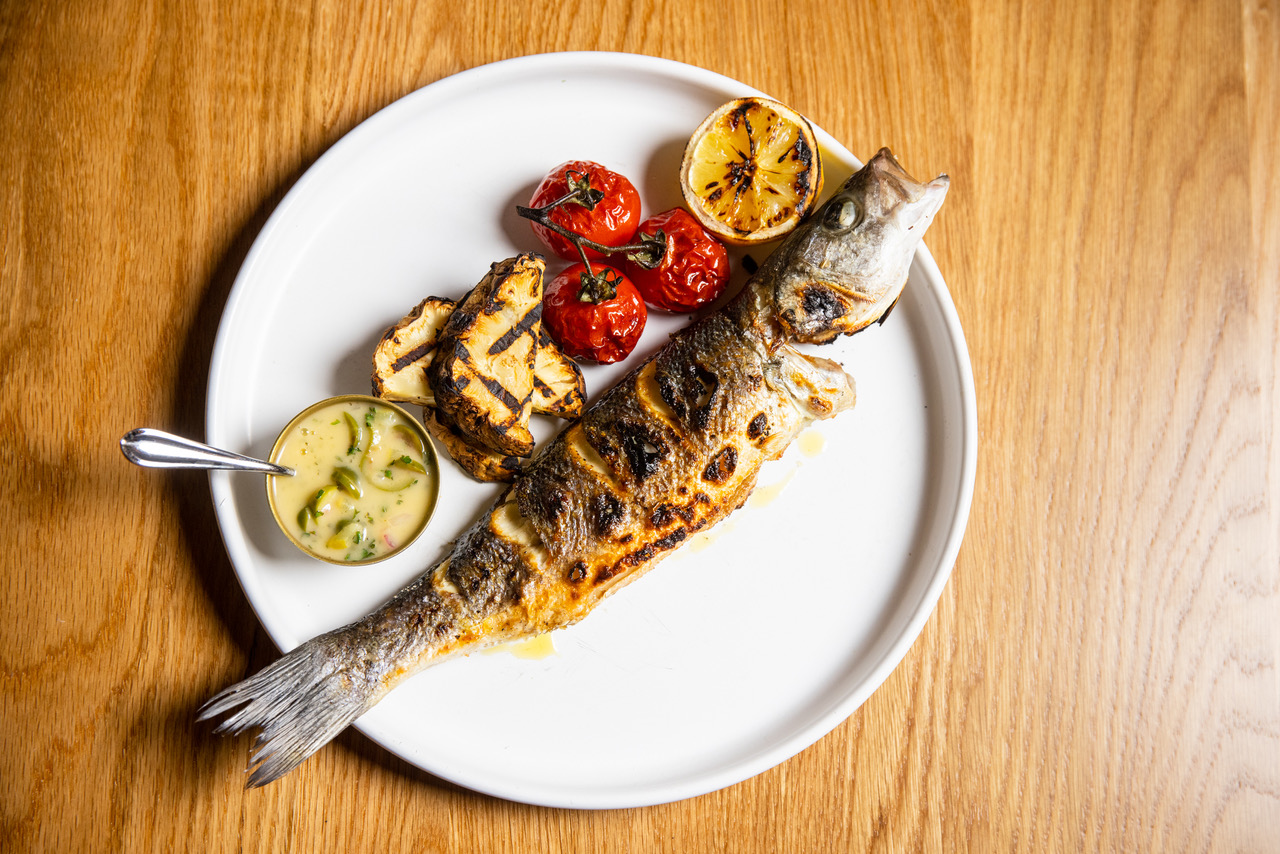 Bokovza is young and driven and although he studiously and repeatedly goes out of his way to acknowledge and credit his staff for everything, he is unmistakably the gifted food visionary. “I eat in my mind,” he once told me when I asked him how he came up with his dishes. “Sometimes I hit it right on the nail, sometimes it’s a fucking train wreck. As far as the creativity aspect, I think you either have it or you don’t.”

Well he has it. They do an extraordinary array of Mezze — small, tasty appetizer dishes, the tapas of the Middle East. The Chicken Liver Mousse is chicken liver reimagined in an alternate universe, and the Muhamarra is just a dip of roasted peppers and almonds in the same way champagne is just a carbonated beverage. The Japanese eggplant confit, as they call what we would recognize as baba ganoush, is exquisite. And their Tahina is transcendent. Honestly, how many times in your life have you felt Tahina to be transcendent?

They do a long, perfectly textured flatbread you could go there for alone — simply cooked with olive oil and “the real Zaatar” as he calls his spice blend. “Every region has its own version of it, but it’s spice herbs, sesame, sometimes there’ll be a dried up berry.”

A dish he says he’s especially proud of, which I haven’t tried but will next time, is the Shish Barak, one of the quintessential regional dishes. 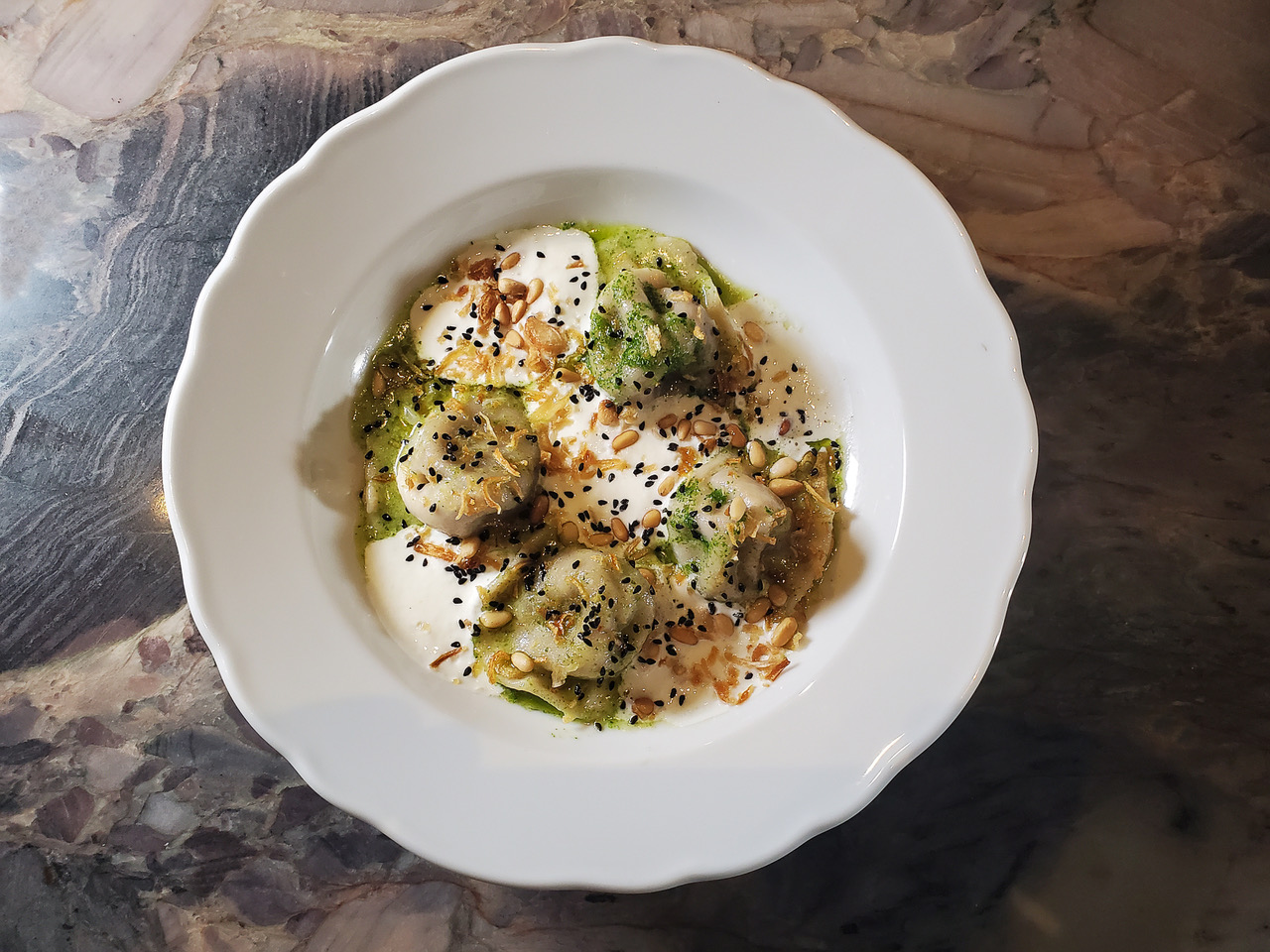 “Shish Barak was something that I never cooked,” he says. “I don’t even know if I heard of it.” His business partner David Sasson suggested it. “It’s a dumpling traditionally filled with meat and cooked in yogurt. The yogurt essentially is the sauce, it’s heated up in yogurt. It might have some pine nuts, it could have some different herbs. We fill ours with mushrooms, not meat.”

For those of us who have drifted aimlessly through life thinking Israeli food is basically a spectrum of mediocre to great falafel, Dagon, named after the Phoenician god of agriculture and the Earth, a pretty wide portfolio when you come to think of it, is a revelation. Three main courses here, in my opinion, put it on the same level as the five or six best restaurants in NY. The whole sea bass is somehow perfectly cooked so that the outside is crispy and perfectly salted and the flesh is succulent. I don’t know five restaurants in America where I’ve had fish that ephemerally tasty and well made. The harissa barbecued chicken is phenomenal, in that it tastes so unlike chicken invariably tastes. The pungent harissa is not overwhelming and allows the juicy chicken flavor to come out. And the Crispy Lamb has already been lauded by the Angels of Life and Death that are New York’s food critics, so I’m just an echo here.

The level of kitchen experimentation to achieve these unique, vibrant flavors is obsessive. The chicken for instance is brought to the restaurant the morning it’s slaughtered, by a guy called Carlo, “one of those old school Brooklyn, Italian dudes who’s very proud of his chickens. You look at them and know that they are special chickens, very yellow, the meat is purple, and it’s super flavorful,” Ari says.

First, they let the chickens dry out, because it’s easier to break them down when a bit dryer and stiff. Then they soak them in brine overnight, let them dry out again through the next night, then they get lightly smoked for about 20 minutes over hickory wood chips. (“I’ve had it without the brine, it just wasn’t the same. We’ve had it not smoked, it just wasn’t the same,” intones Bokovza.) When the chicken is cooked, it’s skin-side down in a cast iron pan after being brushed with a light coating of harissa barbecue sauce. The whole process is very exacting over multiple days.

The trick to the lamb, which, as advertised, has a very crispy skin, is cooking it fast in tremendously high heat, 700 degrees Fahrenheit. 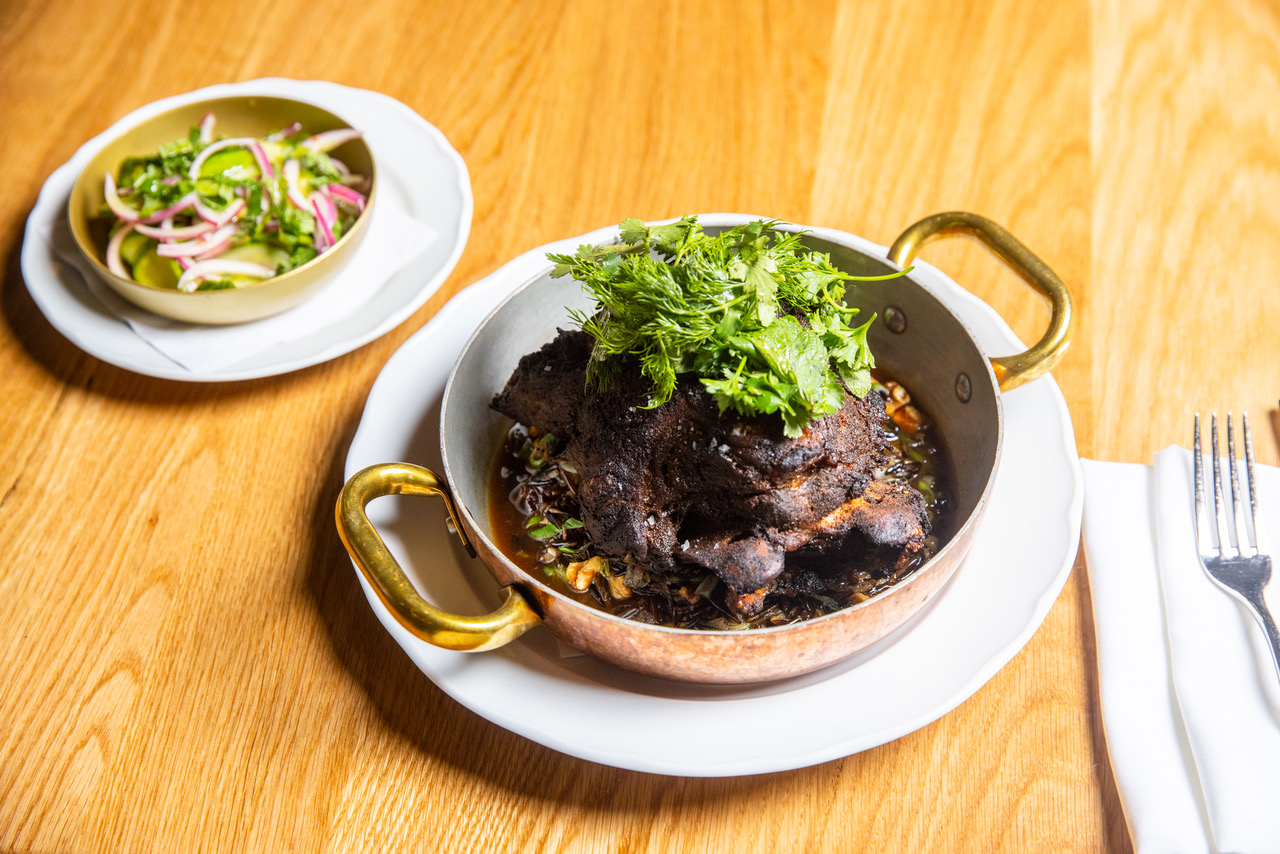 “We braise it first. Just cook it nice and slow, in aromatic spices, stock. That’s what’s getting it tender. We’ll let it sit in the braising liquid overnight so that it really absorbs that, then we’ll rub it with different shawarma spices and blast it in that 700-degree oven, and it’s fast and furious and it’s so hot that it doesn’t allow it to dry out. It creates a crust that acts as a shield and holds in all the moisture.”

Dagon has now been open for over a year, a crucial milestone in the restaurant business. There is actuary data about a restaurant’s survival after the first year, but do you really want me to look that up? A restaurant thrives and soars for as long as everyone involved wants it to — the owners, the chefs, the staff spread out over it, and the customers who are, for as long as they are, thrilled by it. The best restaurants are like a living organism you drift into and out of. This is one of the best and will, one imagines, be around for a long time.

One of the best — and most traveled — chefs on the planet on his favorite food, places and inspirations, and one he isn’t going back to