You’ve seen her before! The clothes, that is. Just for starters: Bridgerton, Wall Street, Basic Instinct, and Fatal Attraction. Ellen Mirojnick is one of film and TV’s premiere costume designers and recipient of an Emmy for Behind the Candelabra and a Career Achievement Award by the Costume Designer’s Guild.

Most recently in Bridgerton she went full-on “fairy tale” with her imaginative take on Regency era clothing (1811 -1820), back when Byron and Keats were writing poetry, Mary Shelley published Frankenstein, and Napoleon was exiled to St. Helena. Ellen knows her sartorial history — when I describe an exquisite pannier gown at the Victoria and Albert Museum that’s so beautiful it brought tears to my eyes, she names the dress.

Ellen is aware when she creates costumes that they’re “markers for the period of time they take place in,” whether it’s the Gordon Gekko look with brightly colored suspenders (inspired by the red ones Ivan Boesky wore), or her aim in Bridgerton to create clothes that are “not historical, but beautiful, luscious, glamorous, aspirational, aesthetic and appeal to a modern audience.” Over twenty-five years ago, she moved from Manhattan to her home base of Los Angeles, though pre-pandemic she was hardly ever there. “My life is about travel,” she says.

You’ve spent a lot of time in London while working on Bridgerton and other films. Describe a typical day in London when you’re not working.

It’s usually a weekend and I have two days for self-care. I love the private gym One KX for yoga and Pilates, get a mani pedi, massage, and I’ll see the acupuncture facialist Sarah Bradden at Harvey Nichols… possibly a little shopping depending on time.

A restaurant or café in London where you like to meet friends?

Bocca di Lupo in Soho, Lucio in Chelsea, The Petersham, and of course burgers at the Soho House or Electric House in Notting Hill.

I like all of the Firmdale hotels. The Ham Yard Hotel, The Soho Hotel, Charlotte Street Hotel, Covent Garden Hotel and Haymarket Hotel. They’re cozy and pretty and have great service.

I love traveling so its difficult to choose one, but I’d say the South of France. I like driving along the coast, stopping in Nice, Eze or Monaco. My favorite is Antibes. The light is breathtaking and the Hotel du Cap-Eden-Roc — it’s just romance!

What are must-have travel items you pack?

It’s always black clothes. I don’t really care which brand as long as the clothes are well-cut. I pack whatever coat is necessary, maybe a bathing suit, Hermes scarf or two, flats, sneakers, boots and gold jewelry. And of course, skin care and perfume.

I wear a Cartier tank watch, and I like gold jewelry and especially respond to 24 karat. I’m also a big lover of platinum jewelry. Lately I’ve been wearing two Tiffany rings from the HardWare collection, a pinkie ring with diamonds and my father’s signet ring. It’s a wide rectangle with his initials cut out.  My fragrance is A La Rose by Maison Francis Kurkdjian. I like Chanel fragrances too.

The Metropolitan Museum of Art [in NYC]. I find it soothing and not over-stimulating to walk around. I like the costume museum, and the French galleries have the most beautiful collections.

Where do you shop and any special designers?

Now I find shops aren’t discoveries anymore. I like a lot of designers from Yohji Yamamoto and Joseph to Prada to Everlane, Uniqlo, and By Walid. He’s a friend and I have a beautiful jacket that he gave me. He repurposes 19th and 20th century fabrics. I like a uniform for work which is a black t-shirt or turtleneck and leggings, Stan Smith sneakers or flat boots.  If I need something for evening, I don’t have one set place to shop. I’ll always call Laura Mannix at Saks to see what she has.

What kind of carry-on bag and what are your packing essentials?

I switch up carry-on bags. I always have a crossbody, assorted totes, Gucci, Liberty of London, YSL or a Prada backpack. I don’t like it when the bag itself is too heavy. I use a vintage Prada dopp kit for travel sizes of MZ Skincare from London and Valmont Prime Renewing Pack which is great when I get off the plane.

A costume designer who inspires you?

[Three time Oscar winner] Orry-Kelly. He designed the costumes for my all-time favorite film Auntie Mame. And he did costumes for a lot of films including Casablanca, Some Like it Hot, and An American in Paris.

The best things in life are worth going back for… 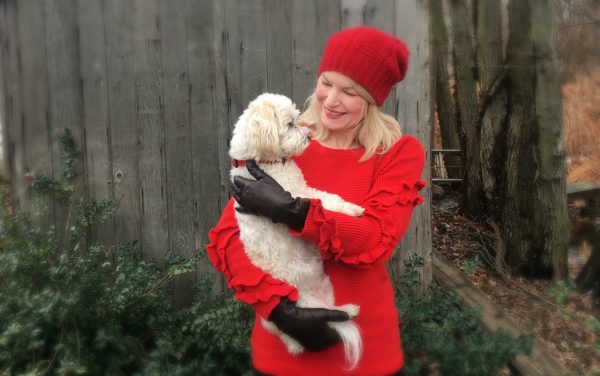 Liza with her way cool Italian gloves. The dog is author's own