To most Italians and Italian-Americans, Christmas Eve, also known as The Vigil, is a night devoted to eating fish. Though nobody truly knows when this tradition started back in the Old Country, a traditional Feast menu consists of either seven dishes of seven different fish or one or two fishes prepared seven different ways; seafood is allowed too. We picked several of our favorite chefs to share their favorite fish dishes for you to make your own Feast of the Seven Fishes at home. 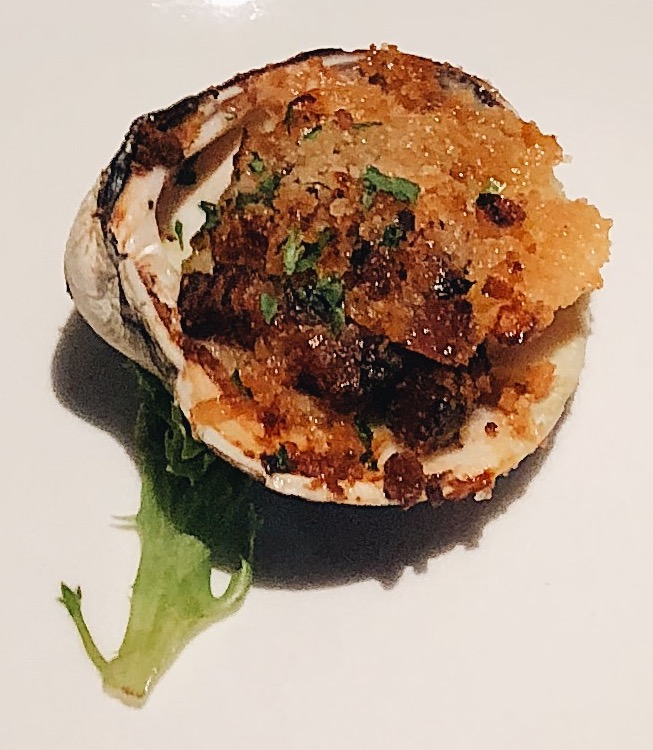 Place ½ ounce of casino butter on each clam evenly. Top each clam with 1-inch piece of bacon. Sprinkle lightly with bread crumbs. Bake at 425 degrees for 6 minutes.

Remove from oven and place in broiler until brown. Remove from broiler. Place 1 ounce of casino butter around the center of the dish to melt. Garnish with parsley and lemon.

Saute shallots, red and green and cayenne pepper in 2 ounces of butter for 3 minutes. Add to softened butter with remaining ingredients. Whisk until all ingredients are incorporated. Place in wax paper and roll into 2-inch cylinders; refrigerate. 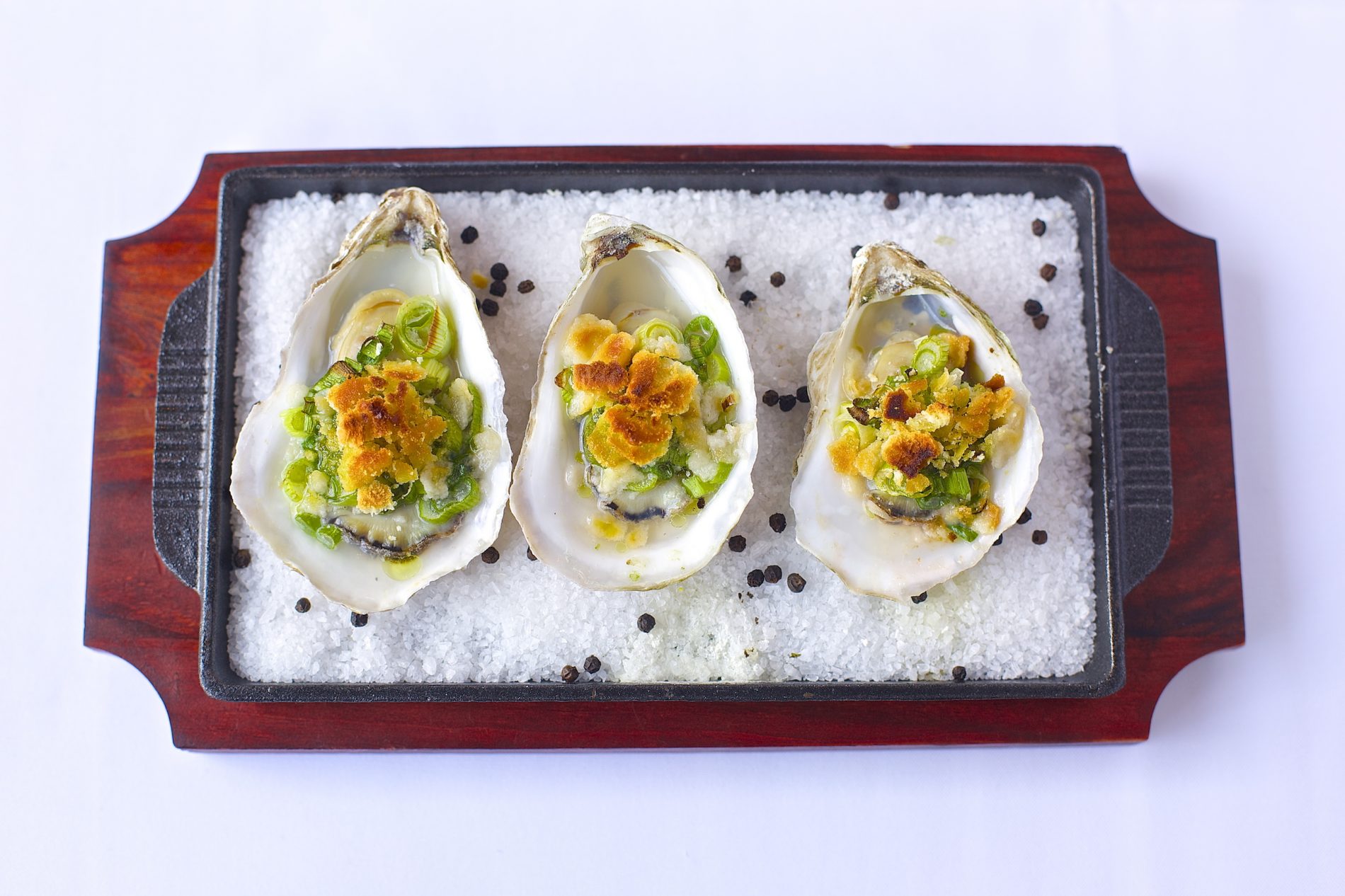 Place the rock salt mixture in a shallow baking dish making sure its deep enough to stabilize the oysters.

With an oyster knife, open the oysters being careful to reserve as much of the oyster liquid as possible as well as loosen the oyster from its shell so it is easily eaten. Once all oysters are open and ready, top with a ½ teaspoon of the compound butter as well as a good sprinkle of the sliced scallions.

Bake at 400 degrees for about 6-8 minutes until the oysters start to coddle (the edges start to curl up). Remove from the oven and top with rough crumbled Ritz crackers being sure to keep the crumbs on top of the oyster so the crumbs brown and don’t become soggy.

Return the oysters to the oven and bake another 3-4 minutes until the crackers are brown and toasted. Remove the oysters from the oven and serve hot after drizzling each oyster with absinthe to taste. 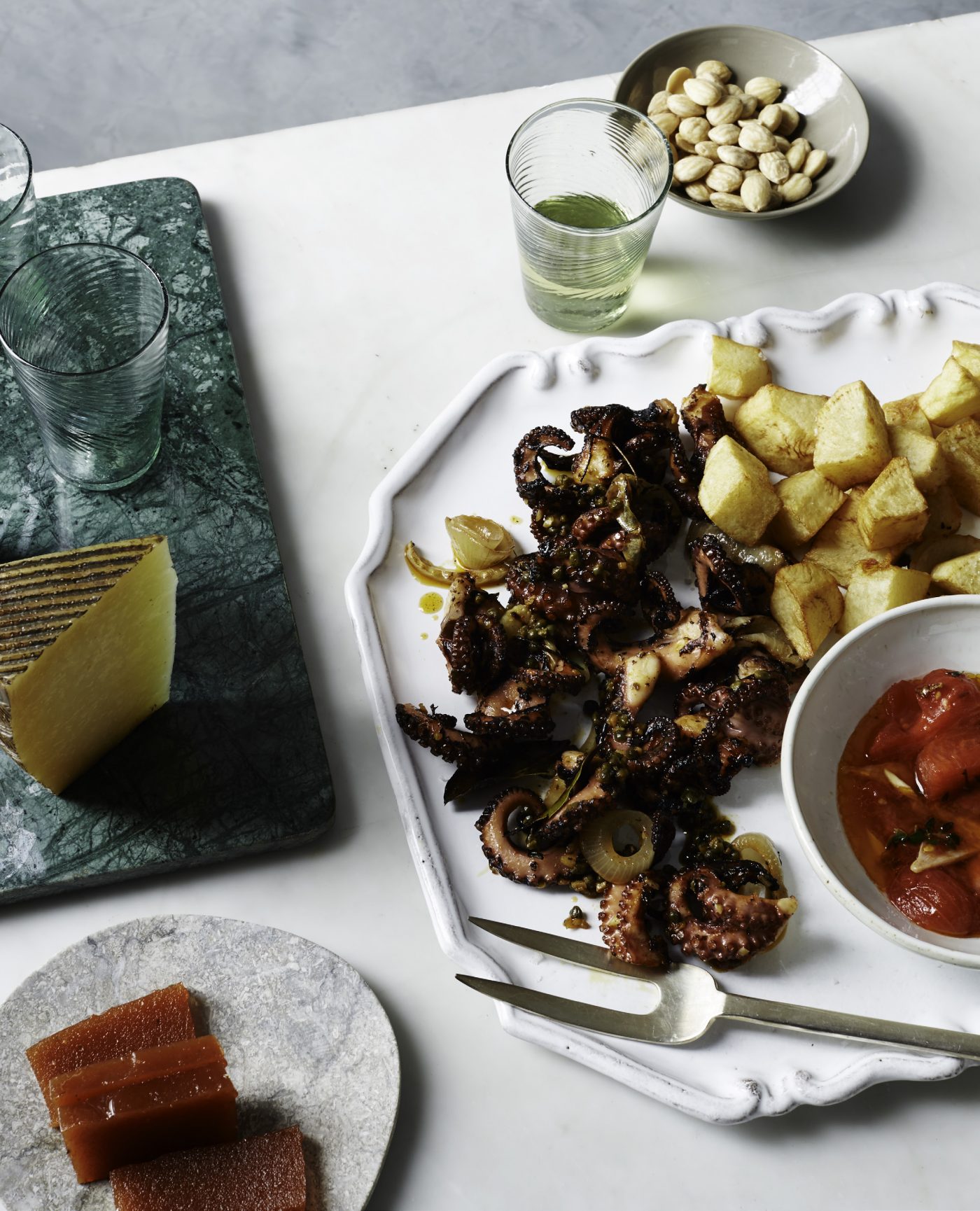 Preheat a 5-to 6-quart slow cooker.

Bring a large stockpot of water to a boil. Add octopus and boil briefly to tenderize, about 2 minutes. Drain and let cool; then slice octopus into 2-inch pieces.

Place fennel, onions, parsley, oregano and bay leaves in the slow cooker. Arrange octopus over vegetables. Drizzle with 1 tablespoon oil and ½ teaspoon salt. Cover and cook on low until octopus is tender, 2 hours (or on high for 1 hour).

Heat a grill or grill pan to high. Remove octopus and half the vegetables from slow cooker (dis­card remaining vegetables and liquid); toss with 1 tablespoon oil and grill until charred, about 6 minutes. Transfer to a bowl.

Meanwhile, gently heat remaining ¼ cup oil in a small skillet. Add garlic and cook until just fragrant, about 2 minutes. Stir in capers and lemon juice. Remove from heat and stir in both paprikas. Pour over octopus, toss, season with salt and serve.

Tip:  Look for the smallest octopus available. It should be firm to the touch, smell of the sea and be bright white underneath, with pretty purple-black tendrils. All parts of the octopus, except for the tough top, are edible. 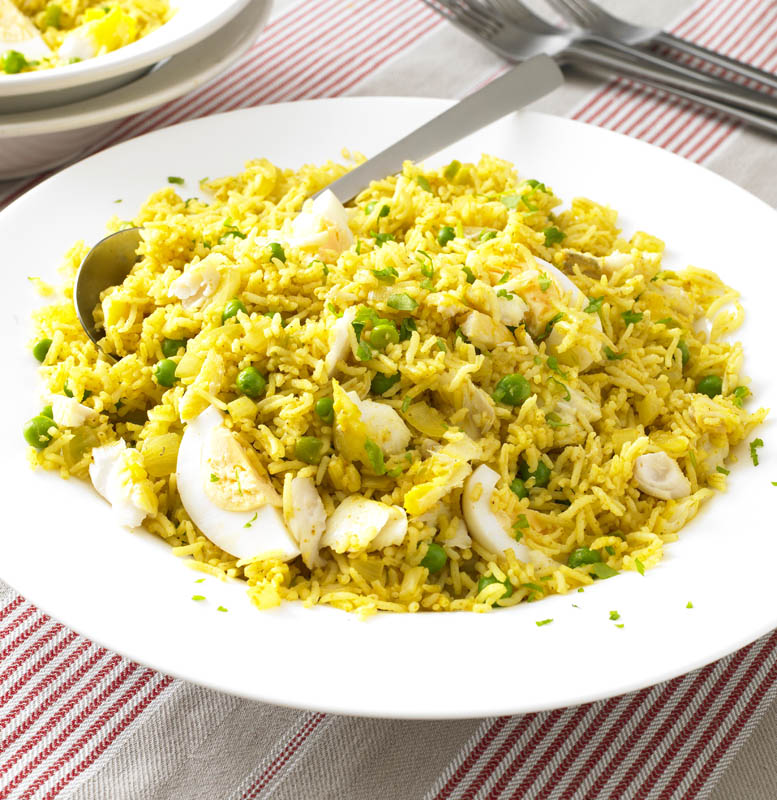 As a child or later in life when I was at home at my dad’s house on Christmas Eve, we always had kedgeree for supper – I have no idea why, it just was, though I think it came from my father’s childhood. There are a lot of different recipes, but this was ours. Neither of my husbands liked it, but what do they know, they’re Americans. — Camilla Paul

Salt and pepper to taste

Boil the rice until just cooked (be careful not to overcook).

Poach the smoked haddock in the milk with bay leaf, peppercorns and thyme for 5–7 minutes, drain and flake.

Hard boil the eggs; shell and cut into quarters.

Melt the butter over a low heat in a large flat bottom pan. Mix in rice, haddock – stir to make sure both are coated with the butter – add the eggs and curry powder and stir, not too vigorously so as not to break up the eggs too much. Stir in peas. Sprinkle with chopped parsley. 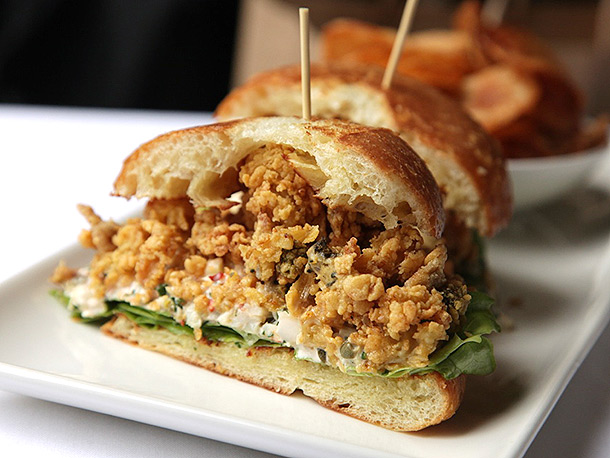 In a medium-sized pot boil lobsters in heavily salted water (should taste like the ocean), Old Bay and lemons. Cook approximately 8-10 minutes until cooked. Remove and cool.

Once cooled take all lobster meat out of the shell (tail, claws, knuckle) and cut into medium dice. Mix lobster with mayo, lemon juice, chives and season with salt and pepper. Reserve.

In a griddle or flat bottomed sauté pan, toast the halved brioche buns that have been brushed with melted butter until golden brown and crispy.

Soak belly clams in buttermilk for a few minutes and slightly drain off buttermilk.

Place clams in the clam fry mix and coat thoroughly making sure the clams are all separate and not sticking together. With a colander or basket shake off any extra fry mix and place in a 350 degrees fryer being careful not to overcrowd and lower the temperature of the oil too much. Fry for 2-3 minutes until crispy and golden brown but not overcooked.

To assemble sandwich, place the lobster salad equally over the toasted brioche bottoms. Top with bibb lettuce leaves, followed by the fried belly clams. Place the toasted brioche tops and give it a good smash. Cut in half if desired and serve with Old Bay potato chips. 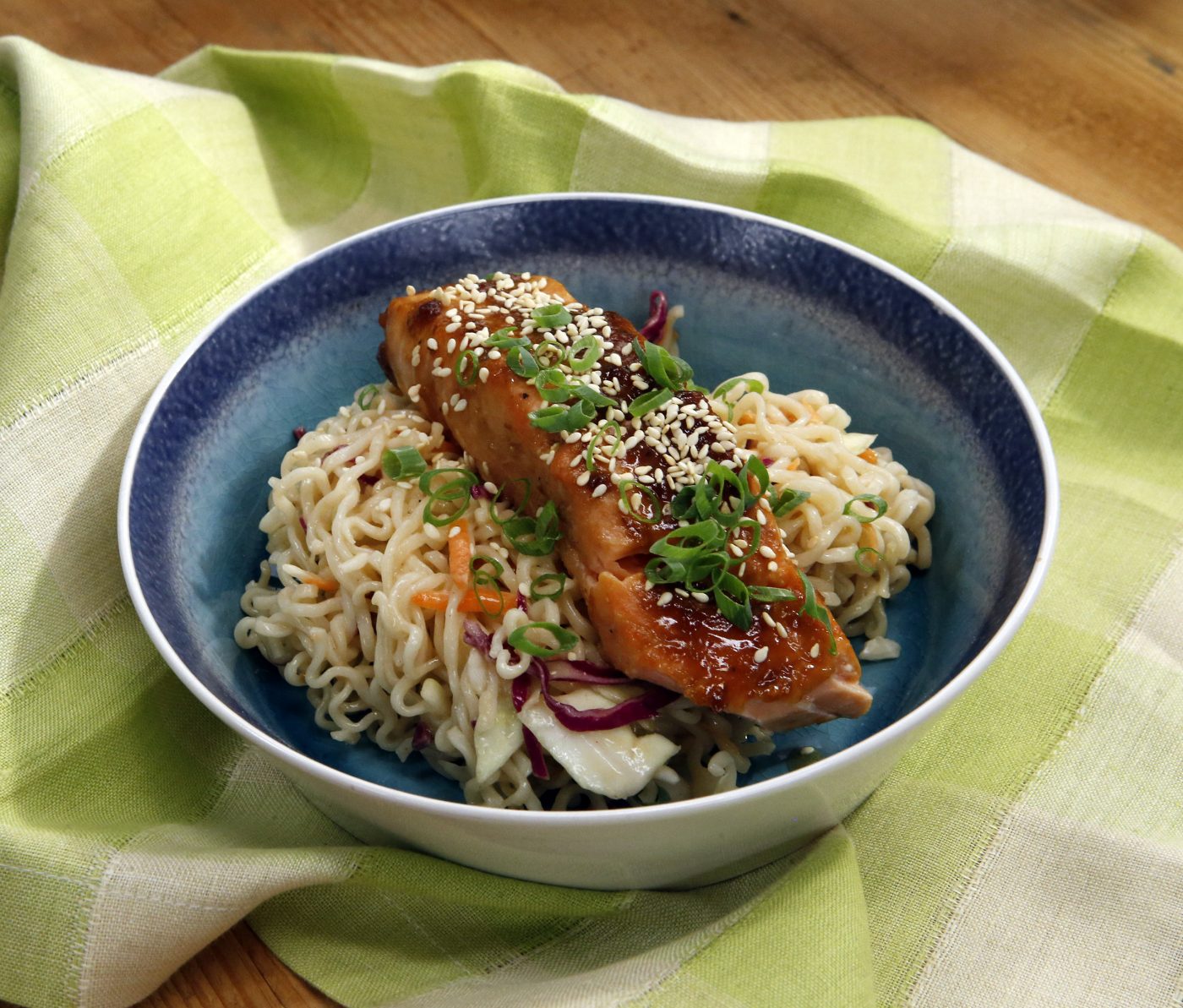 Cook the ramen noodles (minus the seasoning packs) to very al dente according to the package instructions. Let cool.

Mix together the peanut butter, lime juice and 1/3 cup Asian dressing. Toss with the cabbage mix and cold noodles. Let sit for at least 30 minutes, tossing a couple times in between.

Position a rack in the middle of the oven and preheat to broil. Line a baking sheet with parchment paper.

Mix the miso, honey and remaining 2 tablespoons Asian dressing in a small bowl. Season with salt if necessary. Liberally brush both sides of the salmon with the miso glaze. Place on the prepared baking sheet and broil on the middle rack until the fish is browned, the flesh is opaque and the interior is 145 degrees, 8-10 minutes.

Place the cooked salmon on top of the cold noodle salad. Garnish with a liberal sprinkling of toasted sesame seeds and scallion greens.

Courtesy of Jeff Mauro, co-host of The Kitchen

Salt-Baked Fish and Potatoes (shown above)

2 whole branzino (about 2 lbs), scaled, gutted, and cleaned (head left on, if desired)

Cover bottom of the slow cooker with a ½-inch layer of salt. Toss potatoes with oil and arrange over salt layer. Bury potatoes in salt, adding more salt, as necessary, to cover. Cover slow cooker and cook on high for 1 hour.

Wrap fish well in parchment paper, tucking ends under, and place on top of potato-salt layer. Sprinkle about 1 cup more salt on top. Cover and cook on high until fish is cooked through, about 3 hours.

Tip: The key is to begin the potatoes an hour before the fish, to give them a head start, and to seal the fish well in parchment, lest it take on too much salt as it steams.