I was flying from Newark to Rogue Valley International Medford Airport (via San Francisco) to visit a Southern Oregon business in mid-November 2021. The last time I was on an airplane was two years prior. My family and I flew to Orlando to spend Thanksgiving 2019 at Disney World. Since then, the actual world has turned completely upside down.

As more folks become vaccinated and boosted and restrictions are lifted by governments, travel is returning to pre-pandemic numbers. Yet so has the increase of unruly passengers. But has the pandemic really made us angrier and feel more entitled? Maybe and yes, respectively.

Let’s face it. Flying hasn’t been a pleasant experience or part of a vacation in quite some time. It’s become a necessary evil, but it’s been this way for decades. Travel’s golden years have gone the way of the kosher meal. Some changes for the better (smoking is prohibited, which I cannot believe flight crews are still required to remind us of) and some for the worst (no more free meals, playing cards, checked bags, etc.). And no more SkyMall. RIP catalog of useless things!

The issue with air quality on board planes seems to be resolved.

From what I can tell, the only major difference between flying pre-pandemic and today is… masks.

My first time flying since the pandemic started out the same way my previous ones did. I woke up way before sunrise, got dressed, zipped my luggage, said goodbye to my wife and kissed my son who was still asleep. Nothing about the pandemic changed the way I packed. The terrorists, however, still prevent me from packing liquids.

The drive to the airport was 15 minutes, which is what it normally is when there’s no traffic. I was allowed to check in the day before. That helps nowadays, with having one less screen to touch at an airport.

At security, I flashed my boarding pass to queue up, where I still saw your stereotypical passengers: 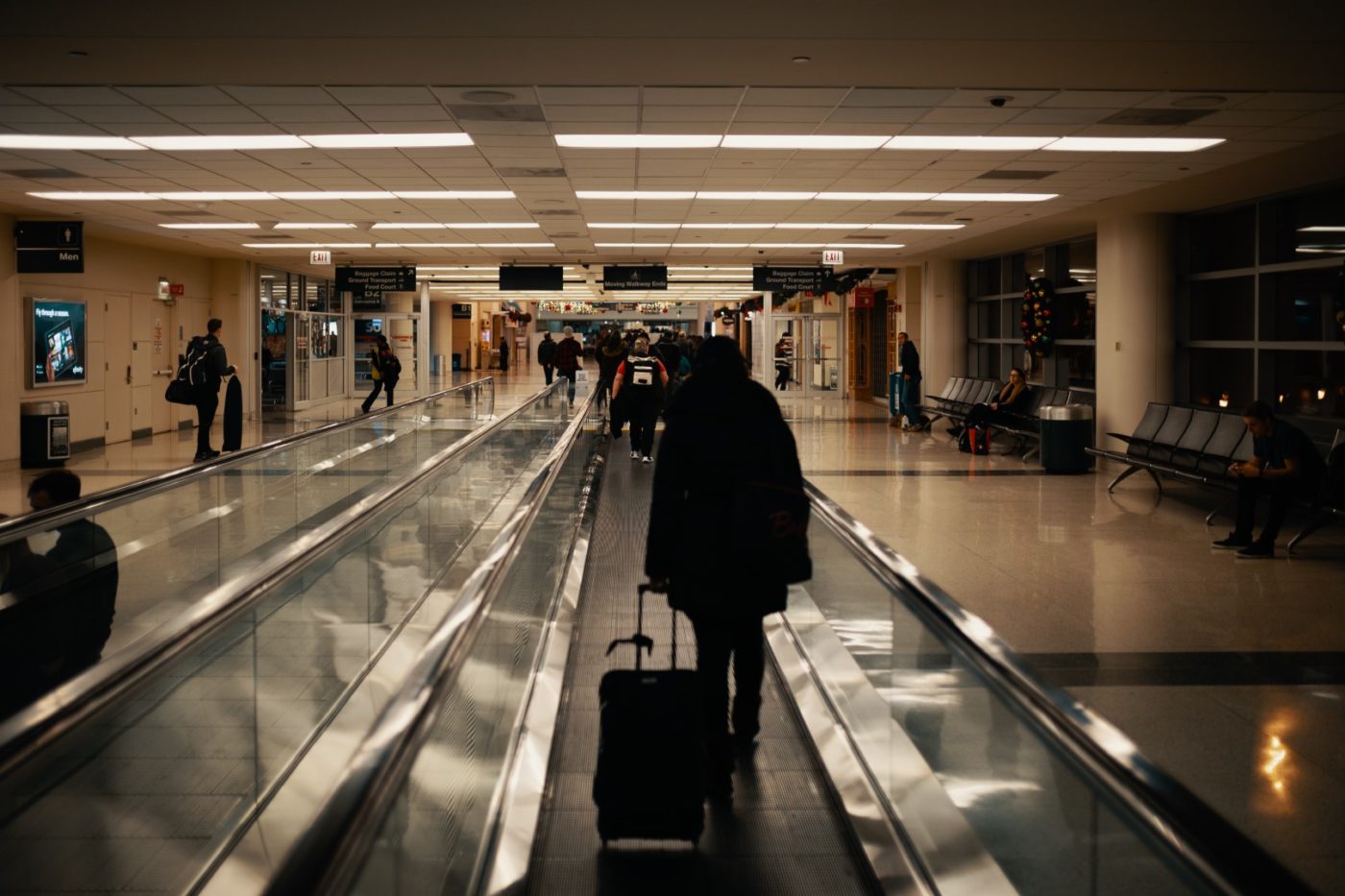 The line moved at the same pace as pre-pandemic. A TSA agent asked that I pull my mask down to verify my mug was in fact the same one in my driver’s license. I still had to take off my shoes and belt, take out electronics and place everything in separate bins. I had my body scanned and arms patted down.

(Sidenote: TSA, please create a designated area to put shoes, belt, etc. back on. It’s a rushed experience standing barefoot at the end of the security conveyor belt trying to get reorganized with other passengers crowding around you.)

I walked to my gate, which was opposite the Global Food Bazaar, where I bought a $12 chicken sandwich and a $4 bottle of water. Prices sound pre-pandemic. I ate it away from everyone. Then I enjoyed a banana, which I brought from home, without pulling my mask up in between bites. Whoops! Sorry FAA. You can send the fine to WONDERLUST HQ!

Boarding appeared seamless – and organized. For once, it didn’t resemble an Italian airport, where there are no rules. Every passenger queued up when their group was called. I recommend doing this. Not just so the flight departs on time, which is nice, but to get a spot for your bag in the overhead bin. That’s prime real estate that gets more valuable each flight. Oh, guess what: Our flight left on time. Thank you to everyone on flight UA788 for your punctuality and not attacking any airline employees.

Once we took off, it was just like old times: a free bag of pretzels. Though I was really impressed with United’s in-flight entertainment.

We hit turbulence over Chicago, but I don’t think the delta variant could be blamed for it.

I was allowed to go to the bathroom. I even left my mask on in the restroom (one of the few somewhat public places you probably should want to wear a mask) but what was disappointing was I couldn’t see the smile of the flight attendant who acknowledged me while waiting in line. All words are mumbled from behind a mask and all audio gets muffled at 37,000 feet.

This was the longest I ever wore a mask, and I thought of my son. (You may remember him from starring in such trips reported here as Lake George and Las Vegas.) I now know what he and his classmates and the millions of students deal with in school. Having worn a mask nearly continuously from 4.20 a.m. ET to 12.15 p.m. PT, I may consider the length of future flights. Having to wear a mask is not a necessary evil, it’s a necessary inconvenience. I personally think only the vaccinated – and those legitimately exempt – should be allowed to fly. It’s a matter of public health and safety.

When we landed in San Francisco, the scene that abrupted on board was classic pre-pandemic. Do you want to guess what happened? Huh? No, nobody clapped. Instead, everyone, except me, stood up at once thinking they could disembark first. I had a good chuckle. When I eventually stepped onto the gangway, I snuck a breath of indoor Bay Area air.

On my flight home, another aspect to flying went unchanged: the inconsistency of the TSA. On the outbound flight we were required to take out all large electronics. Returning, we were instructed to leave everything in our bags.

While waiting to board in Medford, I heard over the loudspeaker that a Delta flight to Seattle was overbooked – seems like a very pre-pandemic thing to happen, and so much for trying to keep passengers six feet apart! What blew me away was the starting compensation for anyone who was willing to take a later flight: $700. Then it rose to $900! This was in the payment of a gift card to either Macy’s, Amazon, or American Express. (I’d choose the latter.)

The piece de resistance was when we landed, early, at Newark. Should I thank COVID for that? Our gate was clear, but traffic on the runway held us from taxiing. “It’s rush hour at Newark,” the captain announced. Wow, rush hour at an airport. Sounds like some things never change.