In Hanoi, anything is possible. I learned this the night I lost my motorbike key. It was 2 a.m. and I was in an almost empty motorbike parking lot at Noi Bai International airport.

I had been living in Hanoi for two months and, judging how the Vietnamese handle any imaginable load on their motorbikes, I learned that people in this country find a solution for every problem. But I didn’t know that a sleepy parking lot guard could get me out of trouble by simply typing his friend’s phone number on his old fashioned phone in the middle of the night. Twenty minutes later, after his friend finished and left with his dusty little mechanic’s bag, I had my new Yamaha key and was three hundred thousand dong (15 dollars) lighter.

I am still using that same key. It still works. That’s why I was all ears when I first heard about Gold Street, because nothing is unlikely in Hanoi. 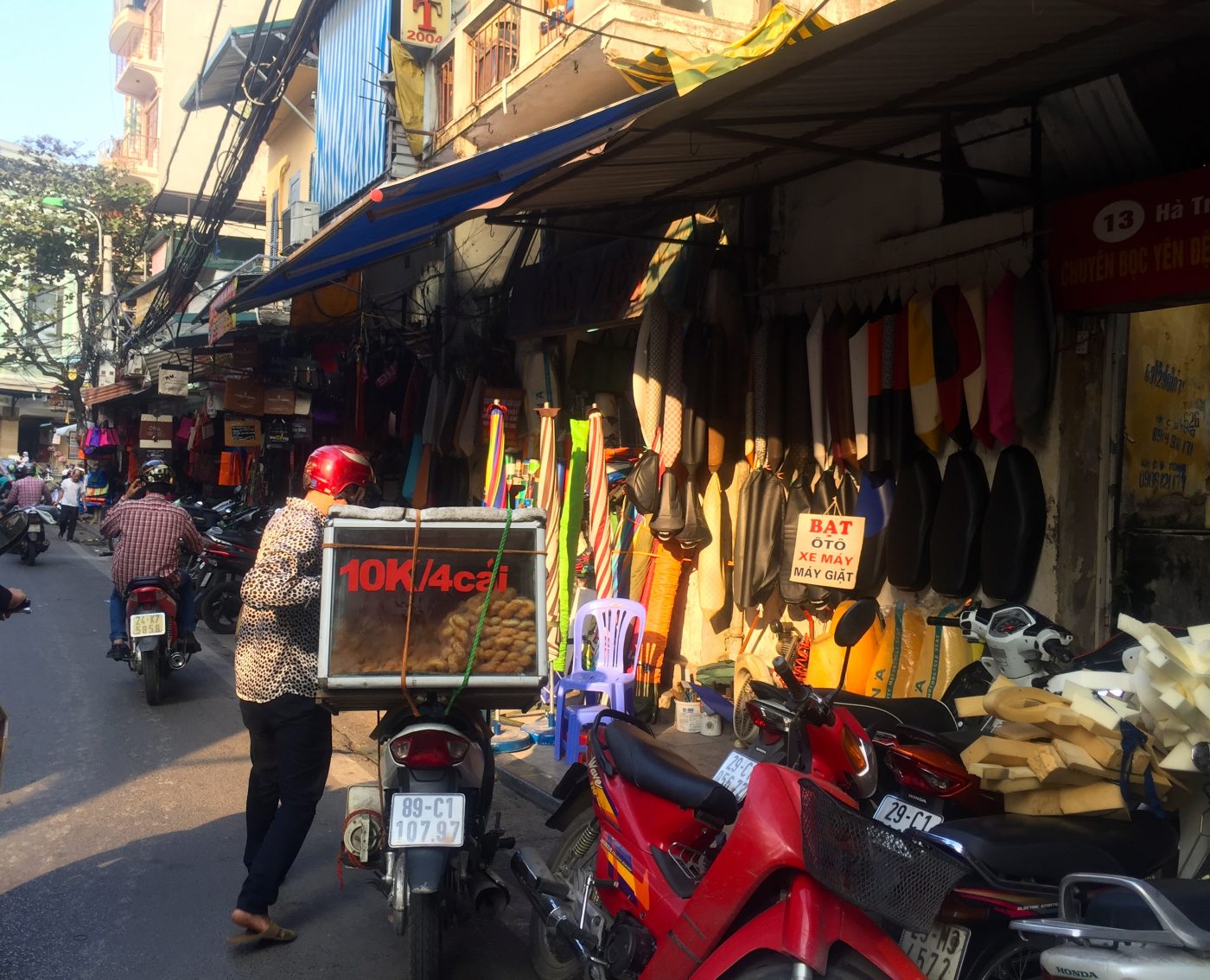 Gold Street, or Hang Bac in Vietnamese (which literally means, if somewhat off message, “merchandise silver”) is the place you go when you want to change Vietnamese dong to dollars or any currency you wish, at a way better exchange rate than the official one. You also go there if you want to send money out of Vietnam without complications and the extra fees — these folks can arrange what is almost certainly an illegal international money transfer. The fee is fair and definitely lower than the banks. Normally, sending money out of Vietnam is quite a struggle, as in most cases banks require endless supporting documents.

This is where Gold Street comes in.

It is a busy place, noisily buzzing with motorbikes honking and the loud bargaining of street vendors and tourists. It lies deep inside the Old Quarter, once a merchant hub of Hanoi, now the tourist, historic and cultural heart of the city. Stepping onto Gold Street, like elsewhere in the Old Quarter, feels as if every single person on a motorbike or a bicycle is coming straight at you. Only you. But they are not. You will quickly immerse yourself into the ways and waves of the traffic and once that happens, you are ready to start hunting for the best exchange rate, or for a person you will trust enough to give him or her a couple of thousand dollars and hope the money will appear in your bank account somewhere far, far from this hustle and bustle. 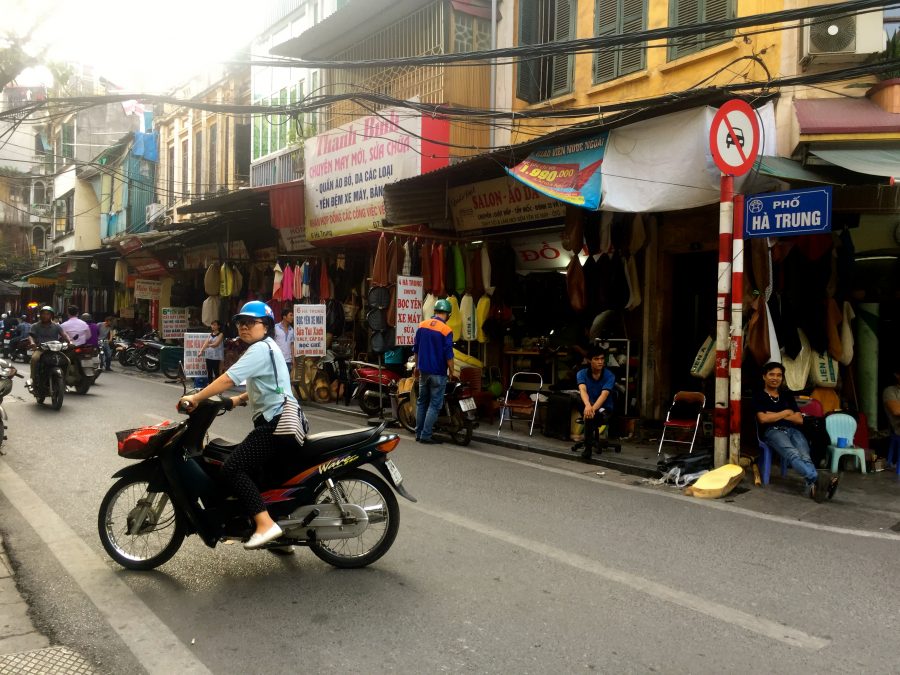 Scooters are the preferred and ubiquitous travel in Hanoi***Petra Zivic***

I heard that the process of sending money overseas is very simple — you give them money and then you wait. You get no receipt, nothing of the kind. You might only get a nod and an assuring look that means that your money will be there.

I frequented Gold Street whenever I needed to buy dollars, or Thai baht, or whatever currency I needed for my next trip. According to Vietnamese law, only the banks and “authorized credit institutions” are allowed to exchange money, and they are required to stick to the exchange rate set up by the Central Bank and of course issue a receipt for every exchange.

My friends advised me to try Ha Trung street for sending money overseas. It is a short walk away from Gold Street, and similarly lined with gold and silver shops. I couldn’t stop staring at the madness around me. Amidst the cacophony of the perpetual traffic and cell phones ringing incessantly inside the gold shops, street vendors were trying to sell me Vietnamese sticky sweets, for only 10 thousand dong (40 cents), while a seamstress was trying to call to me to pop into her makeshift, dusty store. I was glued to all the leather bags and wallets hanging from the shops’ windows. Ha Trung street is where you can buy anything made of leather, and also the perfect place to repair jeans, FYI.

After ten minutes of wandering Ha Trung street, I popped into one of the gold stores. The woman at the counter was wearing a synthetic flowery shirt and a bored look. That changed when I asked if I could send some money to the United States. I expected her to press some secret button under the table, which would open the door to an underground passage where she would take me. But instead, she just straightened up in her chair and asked: “How much?” 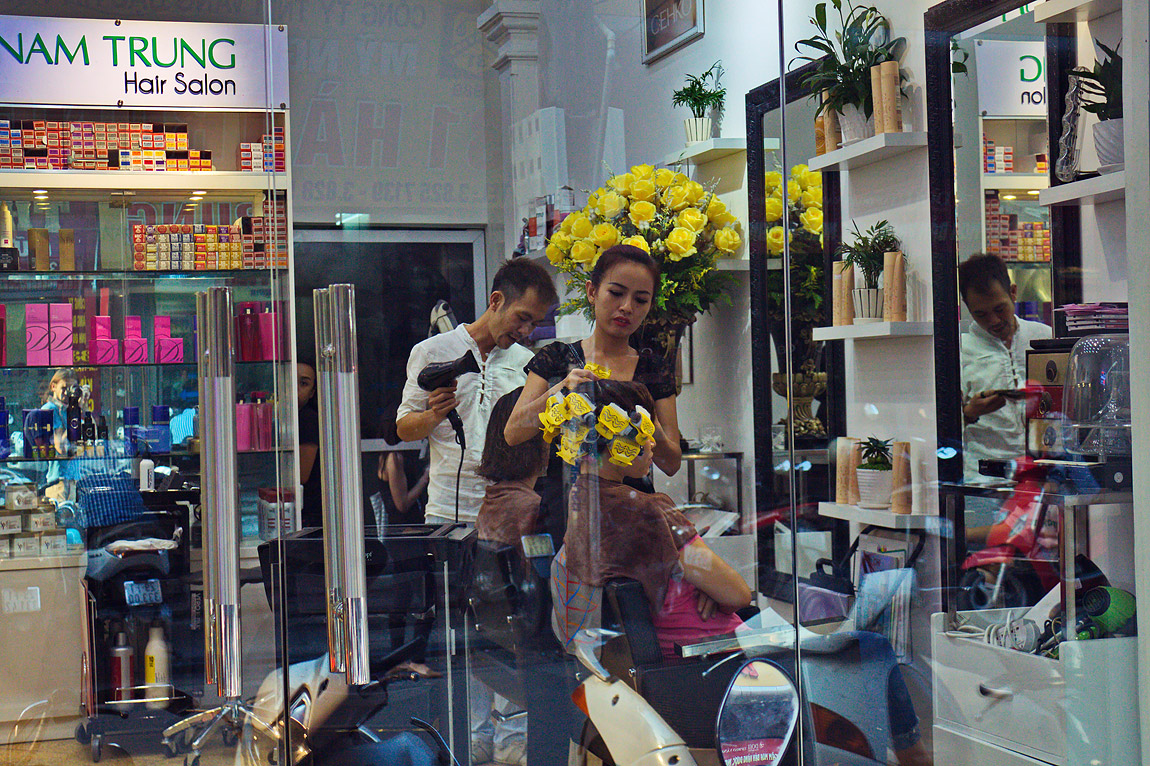 I said one thousand dollars.

For her, our conversation was over. She started calling for the next customer. I was almost kicked out.

I tried the next gold shop, but the same thing happened. I was offered a surprisingly good exchange rate for changing dong to dollars, but once I mentioned I wanted to send money to the U.S. they shook their heads.

“England yes,” a man at the counter told me, pointing his finger with an unpleasantly long nail, which a lot of Vietnamese men nurture, at the 20 pound note he had framed and hanging on the wall alongside a 100 dollar note.

I decided to get lunch back on Hang Bac street. As with the whole Old Quarter, Gold Street smells like the tastiest dream you have about Asian cuisine. Like just about any other street in Hanoi, life here happens in its most intense and diverse forms. Street barbers and shoe cleaners are at every corner amidst endless souvenir stores and tourist agencies. Here, you can get a famous Vietnamese sandwich (banh mi) for a dollar and change in a fancy fast food place, or a bowl of Vietnamese noodle soup (pho) from an old Vietnamese lady selling food on her doorstep, for even less. I decided to go for the soup. I was impatient to try it, as pho, made of noodles, beef or chicken and whatever vegetables the cook has at that moment, never tastes the same. 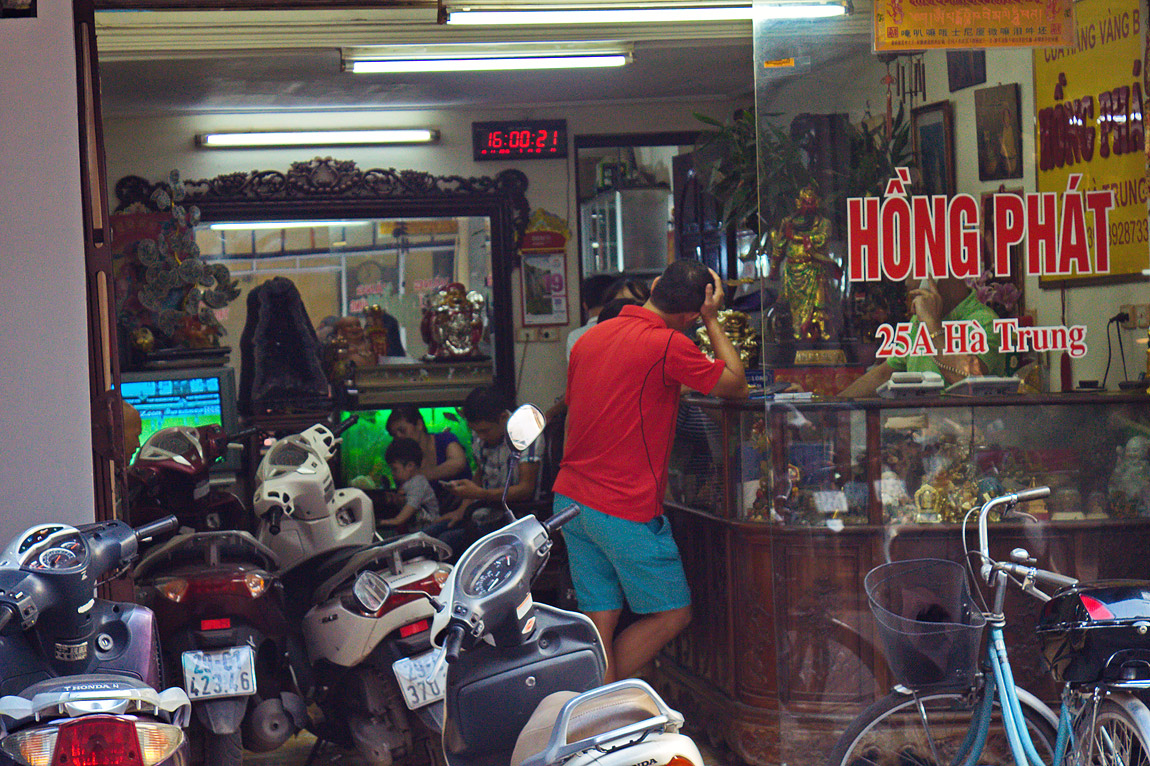 The day was boiling hot outside, and while I was waiting for the soup to cool down, a young Vietnamese guy tried ardently to get me into his souvenir shop next door. He backed off when he saw me attack my sufficiently cooled soup voraciously.

A couple of years ago, the Vietnamese government tried to shut down the currency exchange black market and a lot of gold shops on Hang Bac and Ha Trung were closed. Soon after, they reopened. Today everybody knows what is happening behind those doors. And every local will tell you there is nothing wrong with it — they say they need the black market to help their developing economy grow.

As I finished my pho and was getting ready to leave Gold Street, a guy from one of the stores I had visited, ran to me, shouting: “I give you discount if you send to England. England, OK?”