If you find yourself in Vegas, I recommend you head downtown towards Fremont Street, to the recently opened Circa Resort and Casino where a new steakhouse, Barry’s Downtown Prime, has been getting stunning reviews — no small thing in a town where everything is oversized and often overrated. But not Barry’s. Barry’s is the real thing.

Circa is the tallest hotel north of the Strip at 459 feet high and the first built from the ground up since 1980. Of the many attractions the spanking new Circa has to offer, is Barry’s Downtown Prime. Chef and owner Barry Dakake is a familiar face around town, having previously been the executive chef at N9ne Steakhouse at the Palms and Scotch 80 Prime. With his newest project, Barry has teamed up with partners Yassine Lyoubi, Marco Cicione and Donnie Rihn to bring back a nostalgic era into downtown Las Vegas. 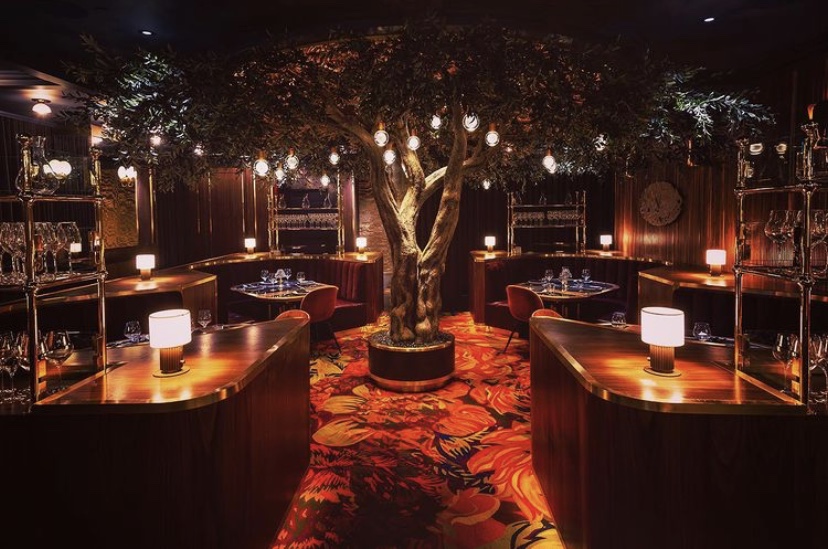 Barry has been working with specialty provider West Coast Prime Meats for twenty years, hand-picking his steaks. His specialties are a twenty-day wet age and a forty-day dry age, and include a 40 oz. tomahawk steak, the forty-day dry age ribeye and a 16 oz. center cut New York sirloin dry age — and fresh bison. Nothing is ever frozen. 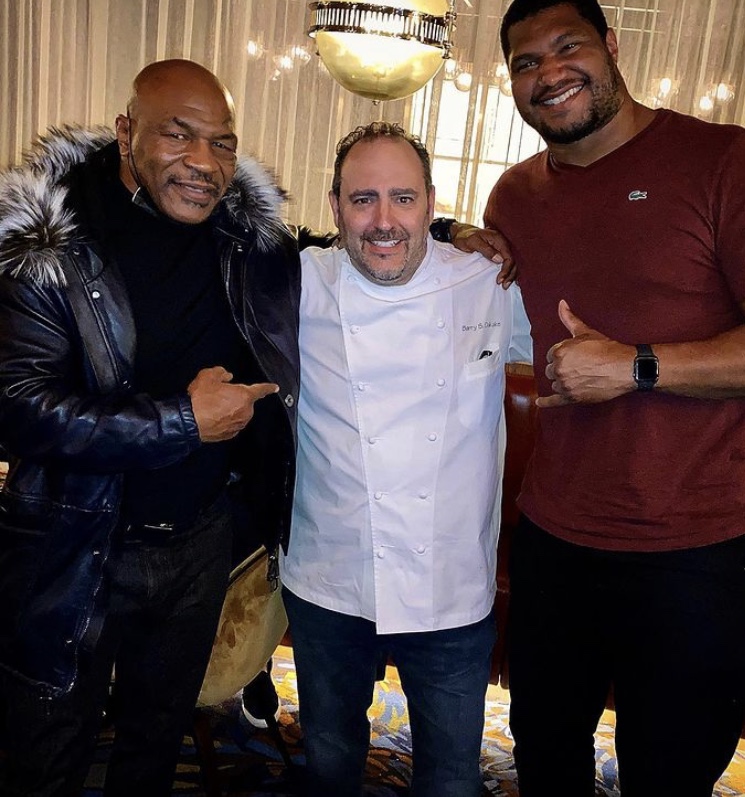 Barry also decided that a vegan menu would appeal to a wider spectrum of clientele. Heirloom cauliflower soup, Romanesco broccoli steak and a vegetable truffle “meatloaf” (with fresh truffles) are among the most popular dishes. Real men eat vegan too.

Other highlights include a table-side cooked lobster flambé, sourced from Maine, and the Steak Diane, a center cut rib eye cooked and served with a brandy mushroom sauce sliced at the table. Talk about nostalgia!

Lobster is canonical for Barry — there are lobster pot stickers and a lobster surf n’ turf sushi roll on the menu. Well, the guy is from Rhode Island. For dessert, the Baked Alaska flambé with strawberry ice cream, prepared tableside, should be a requirement. Maybe it is, by law I mean.

The specialty cocktails represent the awe of ‘50s, ‘60s and ‘70s movie Americana — also Vegas’s most mythologized decades. For instance, The Adventures of… includes 44 North Huckleberry vodka, Italicus Bergamot liqueur, pineberry syrup and lemonade. The Cocktail That Knew Too Much — an interesting concept and perhaps the first ever suggestion of a cocktail as a sentient being — has Botanist gin, Parfait Amour, lavender syrup, lemon and sparkling water. The expansive and expensive wine menu is as expected. There’s also a blended scotch and bourbon menu. 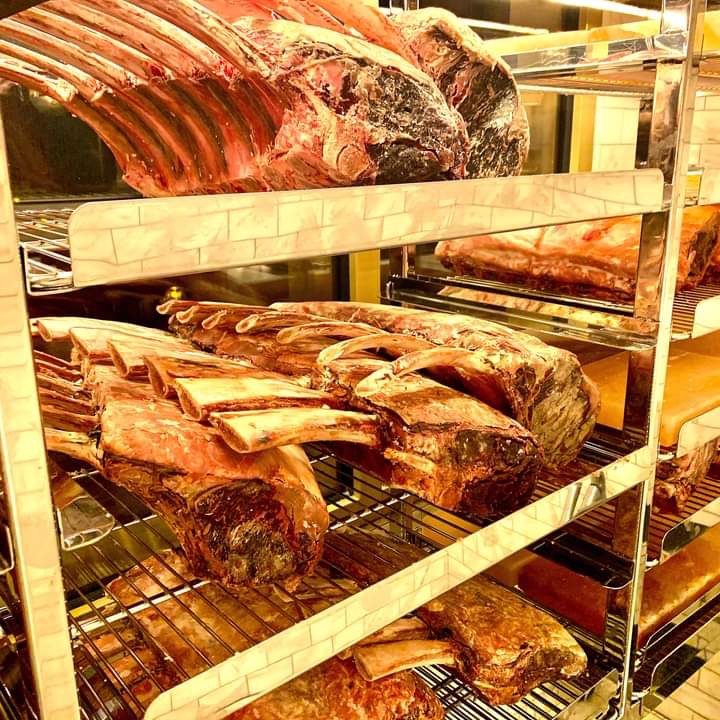 Steaks in the cold storage, getting more aged

The nine private dining rooms within the steakhouse pay homage to the more iconic hotspots of old Las Vegas. Names like The Garden room, The Fremont room and The Sultan’s room bring you back to the glory glamor days of old downtown. Navy and oxblood pantones and warm brown-white oak parquet floors fit in with the burnished brass and antique mirrors.

Of the private dining rooms, Barry says the intimate Chef’s Table is his favorite. It has a twelve-person white marble and brass table and is surrounded by the wine room, and has fresh flowers every day.

Barry’s grandfather arrived in America from Syria and opened a famous supermarket in Central Falls, R.I. Later, Barry’s uncle opened an ice cream and sandwich shop down the road from Barry’s home. How charmed a life is that? Barry started in the restaurant business at the bottom, scrubbing out drains. Now he’s a celebrity chef feeding the constant stream of Vegas celebrities, like boxing champs Floyd Mayweather,  Mike Tyson, and Vinny Paz — the Royalty of Las Vegas — and entertainers from Dennis Quaid to Too Short.

As Nevada eases up on Covid-19 restrictions, now is about the right time to have a more intimate visit to Barry’s. Personally, I would take his recommendation, and go for the Chef’s Table if you can get it. 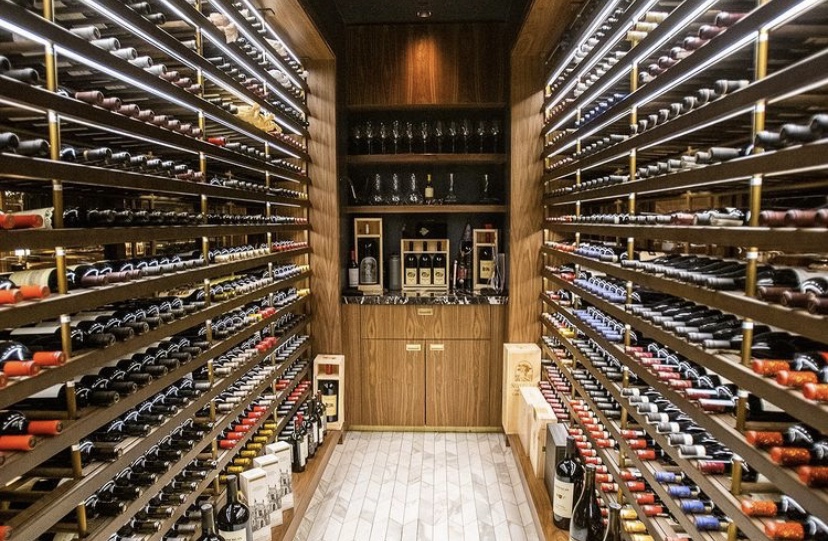 The Magic Kingdom: The room where they keep the wine