THIS IS SHAKESPEARE By Emma Smith

This is Shakespeare might be the closest thing there is to sitting in a pub (ale and crisps at hand) while listening to an Oxford University professor and leading Shakespearean scholar hold forth on her favorite playwright. In this volume, she leaves pesky footnotes and marginalia behind. Each of twenty plays gets its own chapter, and the reader is carried back to the Elizabethan age with its occasionally disconcerting customs (like bear baiting) while Smith’s kaleidoscopic knowledge illuminates the plays — interpreting them by the standards of both Shakespeare’s time and our own.

In a particularly insightful chapter on Romeo and Juliet, we find there’s a lot to learn. It’s not news that Shakespeare borrowed other author’s plots, but it comes as a surprise that in the 16th century, novelty in the arts was cause for suspicion and “reworking and rewriting existing texts was the sign of the artist.” Though we know how the plays end, the emotional lives of Shakespeare’s characters resonate with our own. Their comedies and tragedies touch our hearts and remind us, if we need reminding, that we share a common fate. 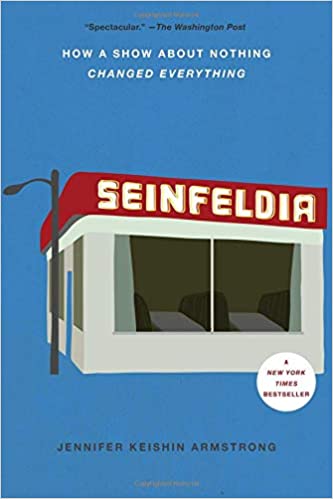 SEINFELDIA: How A Show About Nothing Changed Everything By Jennifer Keishin Armstrong

I thought I knew everything about Seinfeld. Then I read Seinfeldia, which tells the behind-the-scenes stories of how the show came to be on its way to becoming a phenomenon. (The show has earned over $3 billion in syndication.) Through interviews with the show’s vast cast members, and writers and producers – sans creators Jerry Seinfeld and Larry David – Armstrong, who spent a decade at Entertainment Weekly, gives the most deconstructive look at how this show about nothing became something, no matter how nonsensical it may have appeared on screen.

“Seinfeldia” is an actual place, says Armstrong, that Seinfeld and David “constructed themselves…when they blurred the boundaries between their fictions and reality like no show before.”

Speaking of reality, the biggest reveal among the 336 pages, to me, was how Larry David used the writers for their real-life experiences to be used in Seinfeld scripts, then replaced them every season with new writers to get fresh stories. Because of that, the show, considered the greatest comedy and even overall show of all time for its impact on pop culture (even travel) gave us so many memorable episodes and lines now part of our lexicon – sponge worthy, master of your domain, the pop in, the big salad, assman. So, if you’re looking for a book to read, yada, yada, yada, this one’s for you.

Bruce Lee is a legend of mythical yet tragic proportions. Yes, he was a famous martial artist (the greatest, actually) and subsequently a cultural icon, but how much do we really know about Bruce?

Author Matthew Polly, who spent two years studying kung fu at the Shaolin Temple in Henan, China, spent 10 years researching and conducting interviews to write the most in-depth look at Lee, aka the Little Dragon. Did you know he taught cha-cha lessons for a dollar? Considered going to dental school? Had an undescended testicle? Is part Jewish (via his Dutch Jewish great-grandfather)? I mean, let’s face it. It wasn’t until after he died at the uber young age of 32 in Hong Kong that he became a bona fide star in the United States.

Born in San Francisco, Lee, who started acting as a baby, spent years trying to make it big in Hollywood, appearing in TV shows such as The Green Hornet. But he was finally recognized for his talent in the film The Big Boss. This led to his three most famous and, sadly, final movies: Fist of Fury, Way of the Dragon and Enter the Dragon; the latter, Lee’s last movie, was his first and only starring role in a Hollywood film (the first two he starred in but were produced by a Hong Kong company).

Polly’s biography tells the tales of how Lee was kicked out of school for fighting, started his first martial arts school in Seattle at 19, then moved to Oakland and Los Angeles. It was in L.A. where Lee was the teacher or “sifu” for such stars as James Coburn, Kareen Abdul Jabbar, Chuck Norris, and the coolest cat ever, Steve McQueen, who Lee wanted to be more famous than. And eventually was.

Bruce wanted to be rich and famous and the “best kung fu man in the world!” He squandered money to live a lavish life. He was always ultra-confident. In 1969, when nobody thought this short Asian guy would be anything but a trainer or fight choreographer, Lee wrote a letter to himself setting out a goal: “Starting 1970 I will achieve world fame and from then onward till the end of 1980 I will have in my possession $10,000,000.” Lee accomplished everything he set his mind to.