It only takes a few moments after walking into a restaurant to know it’s going to be a wonderful experience. It involves some combination of dining room buzz, smells from the kitchen and the initial greeting and vibe from staff.

Zahav quickly checked all these boxes. The dining room is fast paced and high energy, but clearly organized and well run. The smell is of bread and Middle Eastern spices. After checking in and being told the wait for two at the bar was two hours, with no cell phone call backs, I asked how many people leave their names and never come back. The response was “quite a few”.

An hour later I walked back in the door to a big smile and a “welcome back, I think you’ll be very pleased with the update we have for you”. I was told 15 minutes. And yes, it turned out to be a real 15 minutes, not a trendy, too-hip-to-give-a-shit 15 minutes which then turns out to really be 45 minutes. 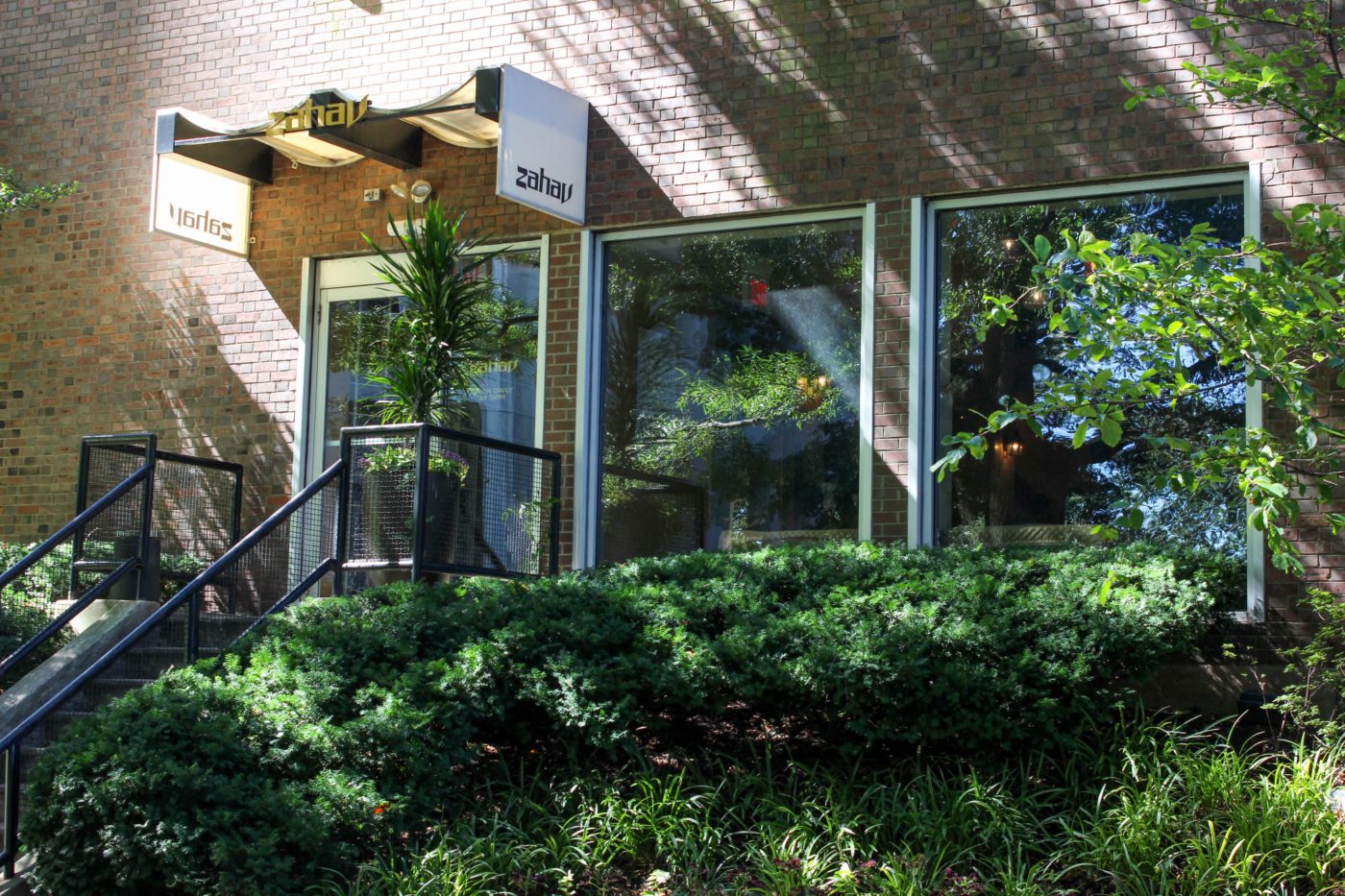 Don’t judge a restaurant by its exterior. Remember, it’s what’s on the inside that counts

The first thing you notice is that bread and hummus are on every table, so naturally this had to be the first order of the evening. The bread is called laffa and is baked in a taboon, a large wood-burning oven, which commands center stage in Zahav’s open kitchen. The laffa is judiciously seasoned with za’atar, a Middle Eastern spice blend, and sesame seeds. How good is it? Imagine the best naan you’ve ever eaten, but cooked a little longer, spliced with your favorite pizza crust.

The hummus is unbelievably light in texture but still manages a complex flavor that had me waiting longer than expected between bites. It is the best hummus I’ve ever tasted. On the hummus plate is a traditional green tehina, which resembles pesto but is made from sesame.

After the laffa and hummus I went with a Yemenite carrot, English pea hilbeh, and carrot top schug dish that tasted a little earthy, a little sweet and very much like carrots. While it was enjoyable, I can’t stop thinking about the spring bean mashwe with asparagus, ramps and preserved lemon, which certainly also reads like a better dish. 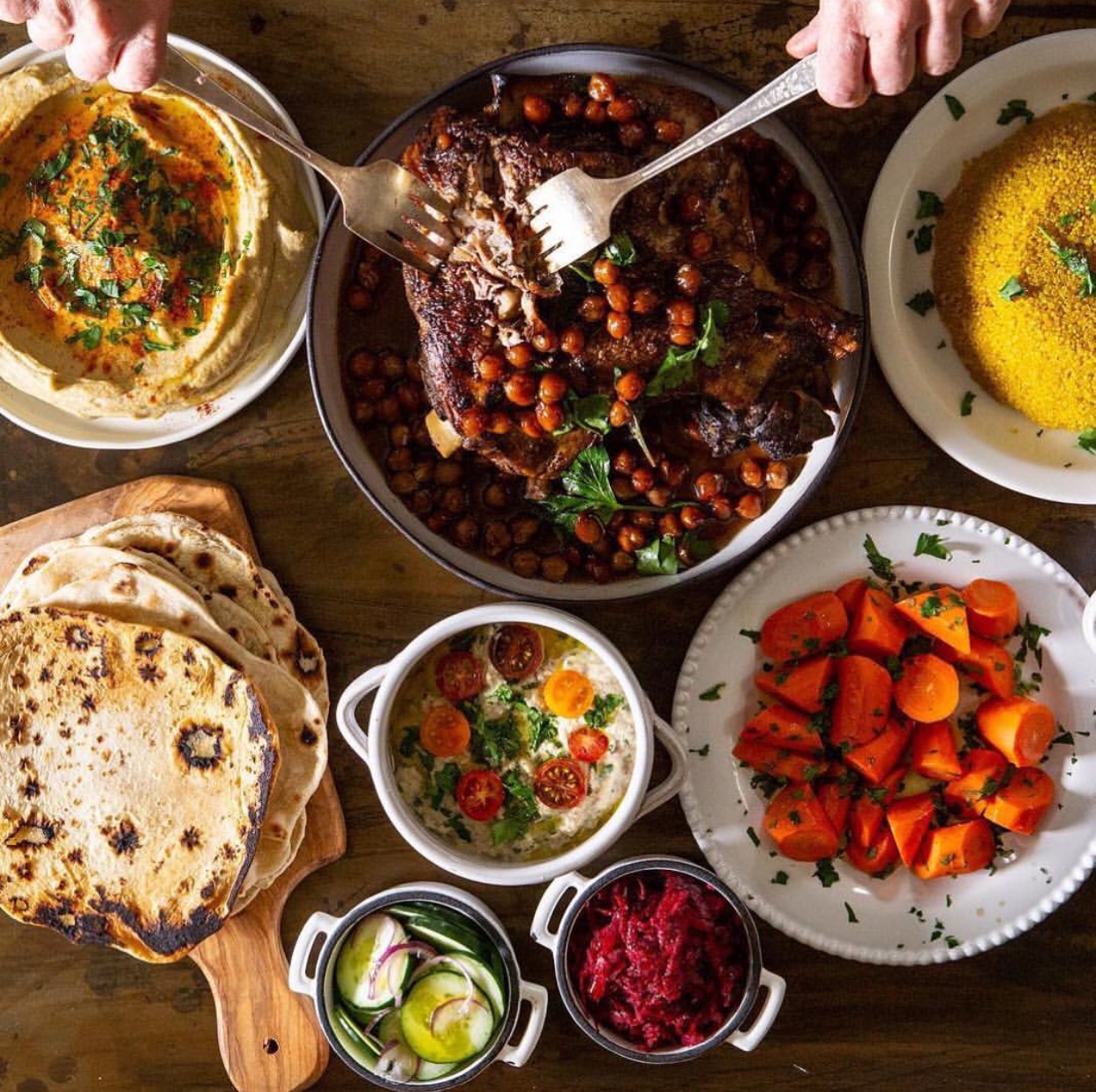 Strangely enough, of all the exotic items on the menu, the two most recommended dishes by the staff were hangar steak and the cauliflower. The cauliflower was prepared with labneh, mint, Aleppo pepper (yes, that Aleppo, although mostly sourced from Turkey now) and lemon. The cauliflower is lightly fried with a good crunch, but it’s merely a vehicle for one of the most complex red pepper flakes I’ve ever tasted, capable of hitting notes as low as smoked paprika and as high as Vietnamese chili paste. The labneh (basically strained yogurt, and like the hummus, the best I have ever tasted) had a dollop of that same wonderful green tehina on it, and the two provide a perfect foundation for the taste thrill that is Aleppo pepper and fried cauliflower. Truly a revelation on the palate.

In between I decided to step out of my comfort zone and order the grilled duck hearts. Timing was perfect as they showed up at the same time as our barmate’s Kibbe Naya, or raw lamb with bulgur wheat, crushed hazelnuts and spring garlic. Both dishes are for adventurous eaters. The duck hearts look like duck hearts and are cooked a proper rare, and the lamb is, well, a raw pile of lamb. If willing, it is well worth the plunge into both. The duck hearts taste like duck filet mignon, and the Kibbe starts earthy and smooth before turning crunchy and slightly gamey.

The guy next to me, who looked like The Jinn from American Gods, explained that this is a Lebanese preparation that traditionally involves the lamb being entirely de-veined and then tenderized for at least six hours. He didn’t think Zahav followed these same guidelines but gave much respect to the kitchen, proclaiming it the best version of this dish he has tasted outside of Lebanon. Towards the end of the meal, after I made some comment about Jewish Israeli food being very different from the Eastern European Jewish food that I’m used to, he finally mentioned that he was from Palestine and his wife was Jewish. He had clearly been to Syria, Lebanon and Afghanistan many times in the last 15 years from the stories he told.

The final courses of the evening were two skewers, chicken and hangar steak. The sommelier actually ordered the chicken for us and explained that the kitchen has been tweaking the spices and prep for a while now and was curious to hear our thoughts. Clearly he knew what was up, because this is the closest a bite of food has ever come to being overly spicy without being overly spicy, and at the same time, magically able to pull itself back off your palate and leave you feeling like you didn’t just eat something that was as spicy as the thing you just ate. If that makes any sense at all. 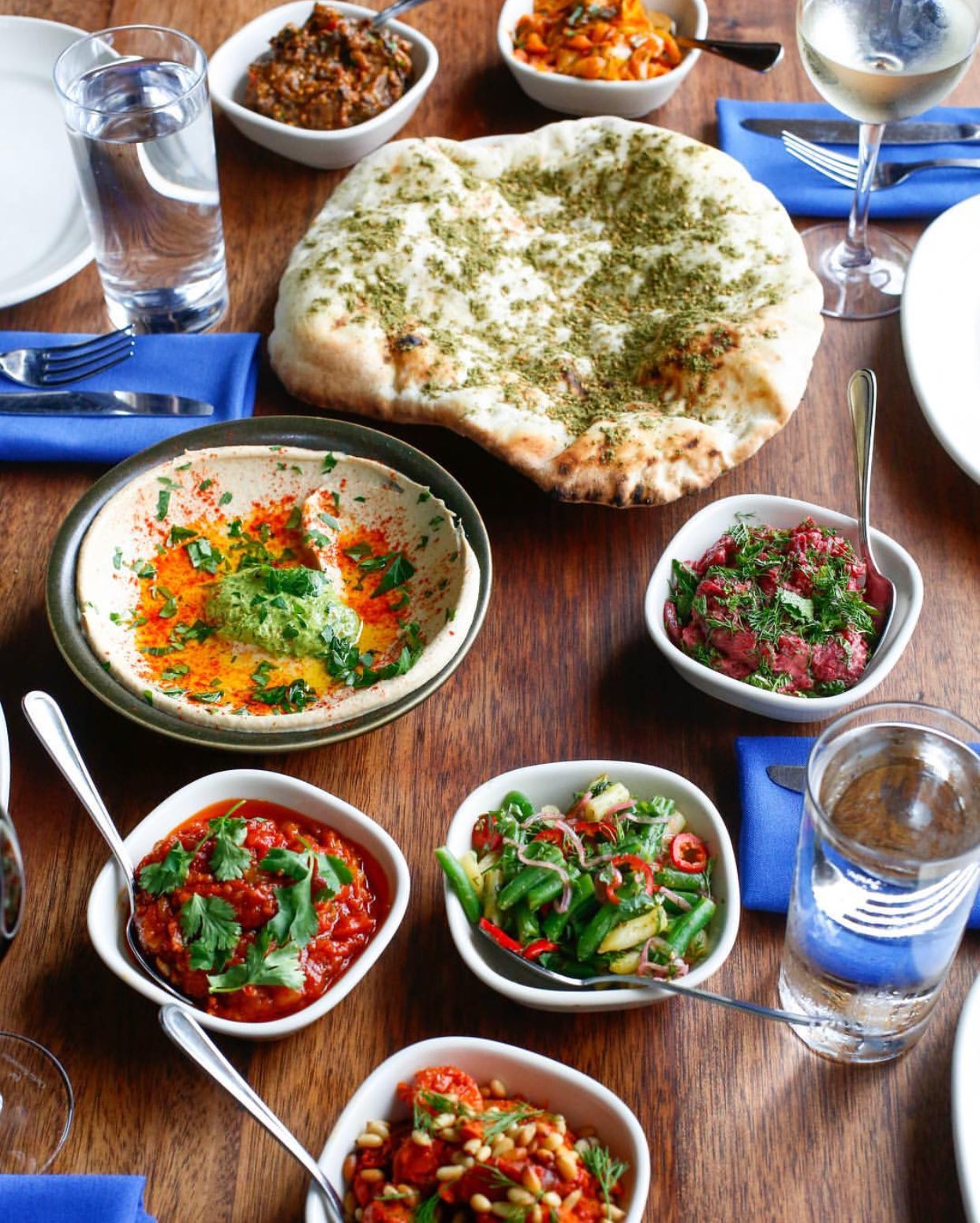 The three tenors of Israeli cuisine: hummus, laffa and salatim

Trying to describe the flavors at Zahav typically leads to meandering run on sentences like this and is probably one of the reasons why the James Beard organization named it the best restaurant in the country. There is simply no comparison. The hangar steak was more about texture than seasoning and spices, like butter that seems too cold to cut but then the knife goes right through it and slams on the plate. The external sear provided just enough resistance before the bite collapsed into meaty awesomeness. These two skewers are perfect complements for each other and I advise ordering them together.

The wine list is relatively small, built to match the food, and the sommelier/beverage director is happy to tell you all about some of Zahav’s more obscure offerings, like a skin-contact natural wine from Tenerife. But your best bet is to let them know what you’ve ordered and surrender yourself to the somm’s suggestions. These are bold, exotic flavors and many of the usual pairing guidelines can be thrown out the window. I ordered one bottle to take me through the meal and let the sommelier bring glasses of other wines as he saw fit.

Zahav was truly a memorable experience. I never felt like I was waiting too long for anything or was being rushed to open the bar seats for others. The entire staff has extensive knowledge of the menu and the cocktails.

Zahav isn’t here simply to replicate traditional Israeli and Middle Eastern dishes but to push these flavor profiles further, in many directions, and in some cases very close to the edge. Should you find yourself in Philadelphia check out Zahav. It will be worth the wait.

Oh, and the salatim and the lamb are also good!