When Gandalf tosses the ring, yes, that ring — the precious — into the fire, Frodo is aghast, thinking it will be destroyed, but instead the ring’s script is glowingly revealed. All along “the precious” has been a posy ring, that is, a ring with a sentiment or motto inscribed on the inside of the band that’s hidden from view. Though other posy rings might not have magical powers like The Lord of the Rings posy that grants invisibility, power, and as side benefit arrests the aging process, the sentiments expressed in the Griffin ring collection have a magic of their own. 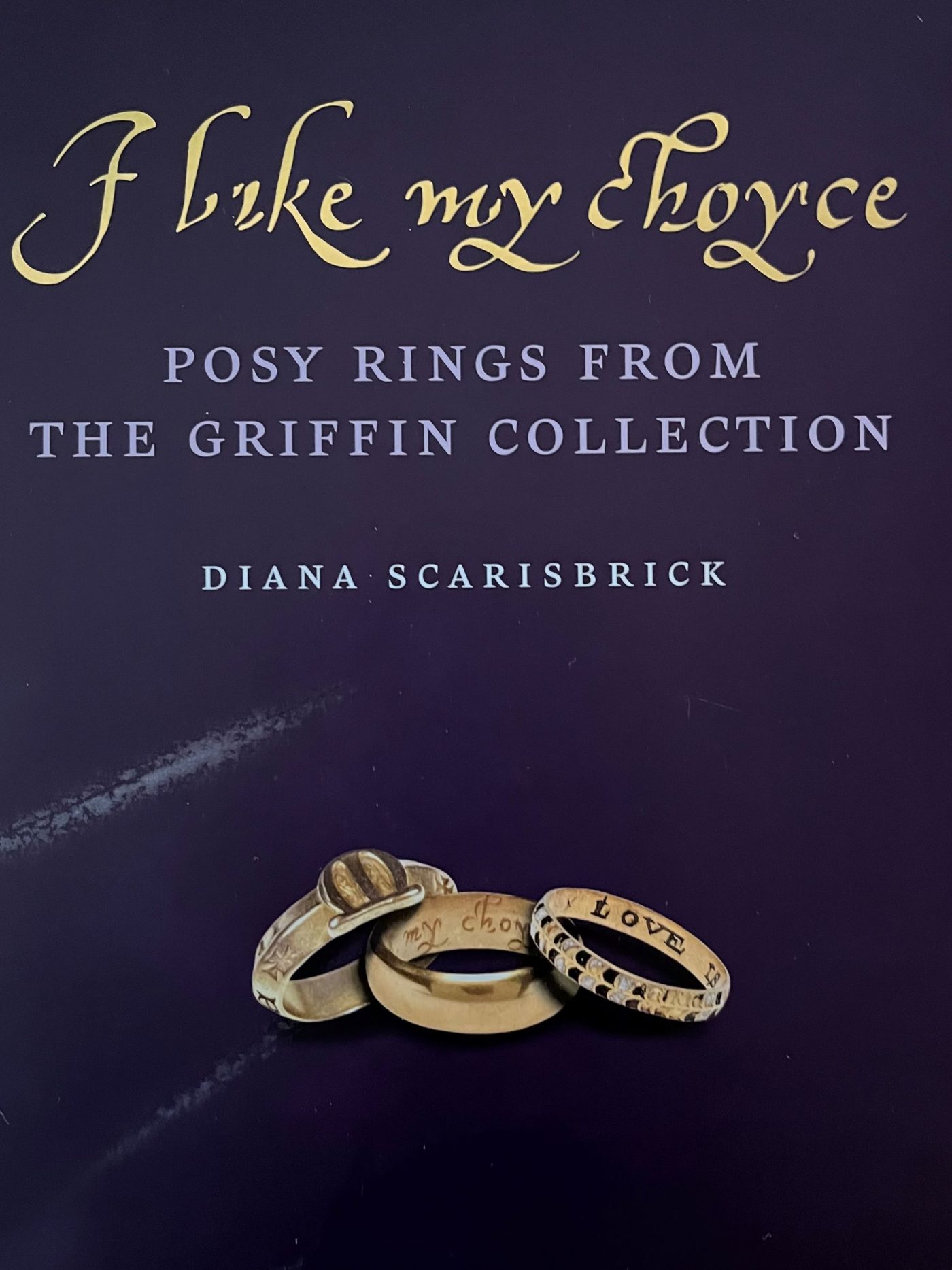 In yet another groundbreaking and arresting book by Diana Scarisbrick, perhaps the world’s greatest antique jewelry historian, the history of the posy ring is unfolded. Starting in the days of antiquity, Scarisbrick traces the origin of the simple band given as a token to an esteemed other. The Griffin Collection, a large collection of jewelry that belongs to an unnamed collector, includes 135 posy rings. Each is pictured and described in this book with its year or century, specs as to weight and size, and the mottoes in French, Latin, and Italian translated to English. Each motto is a tiny soundbite – a sentiment that can be expressed in the space of a hoop.

At the end of the book is an “Alphabetical Index of Mottoes” which makes for arresting reading on its own. The list of mottoes captures the range of emotions from “desire hath no rest” to “true love is endless” to “en le autr,” translated as “in the other,” a posy ring from the 15th century adorned with flowers, leaves, and beveled borders. It seems that a lover’s name, a special date or sentiment inscribed is as old as the desire for personal adornment, commemoration, and the need to express the intangible in something we can touch. To instill one’s message in gold is a way to capture words so that they’ll never tarnish or age. Some of the rings come with august origins. For example, one ring of the 17th/early 18th century was chosen by Oliver Cromwell’s cousin who, for her wedding, had inscribed “Let love abide till death divide.”

Each ring in the collection, with its sentiment engraved in gold, expresses a personal message of esteem or love exchanged by two people who once walked the earth before we did.

The true wonder of the posy ring is that the mottoes expressed are as relevant today as they were centuries ago. It appears that feelings and emotions are as universal as they are timeless.