When our niece found out that I would be spending five days in Budapest, the first thing she said was, “You must go to a ruin bar!” My niece knows things…

A ruin bar? I knew Budapest had Roman ruins dating from the first century BC to the fifth century AD, when western Hungary was called Pannonia and part of the Roman Empire. The first Roman ruins were found in 1778 by a winemaker, and identified as the town of Aquincum.

So, the image in my head was of hipsters sipping martinis or bottles of beer as they leaned against ancient columns under the moonlight. Which would have been faintly horrifying, and most likely and hopefully, impossible.

Not so. Ruin bars must be experienced to be believed. 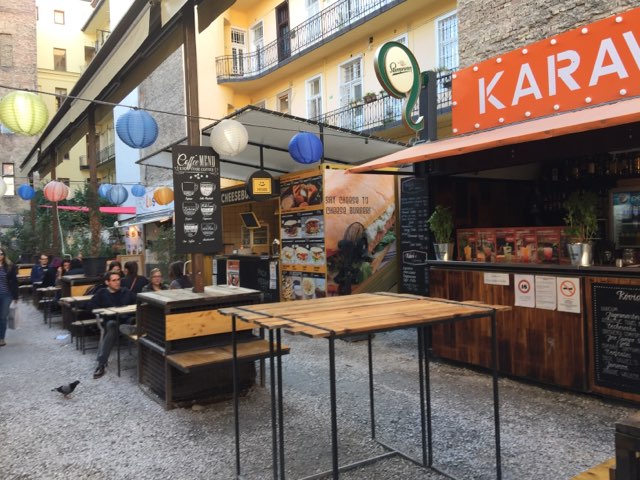 Coffee break: the Szimpla Kert is an all day, every day affair

On the flat east bank of the Danube River lies the City Center of Budapest, crowded with previously condemned buildings near collapse. A visionary entrepreneur saw something other than ruin: charm and excitement that turned into a nightclub genre. There are many ruin bars in Budapest today, but the original, and the one to see, is called Szimpla Kert, which means “Simple Garden” (there is also a Szimpla in Berlin). With minimal repairs, a building scheduled for demolition was revamped to offer bars, food, music, a market, a garden, and a hodgepodge of color and stuff. Lots of stuff. 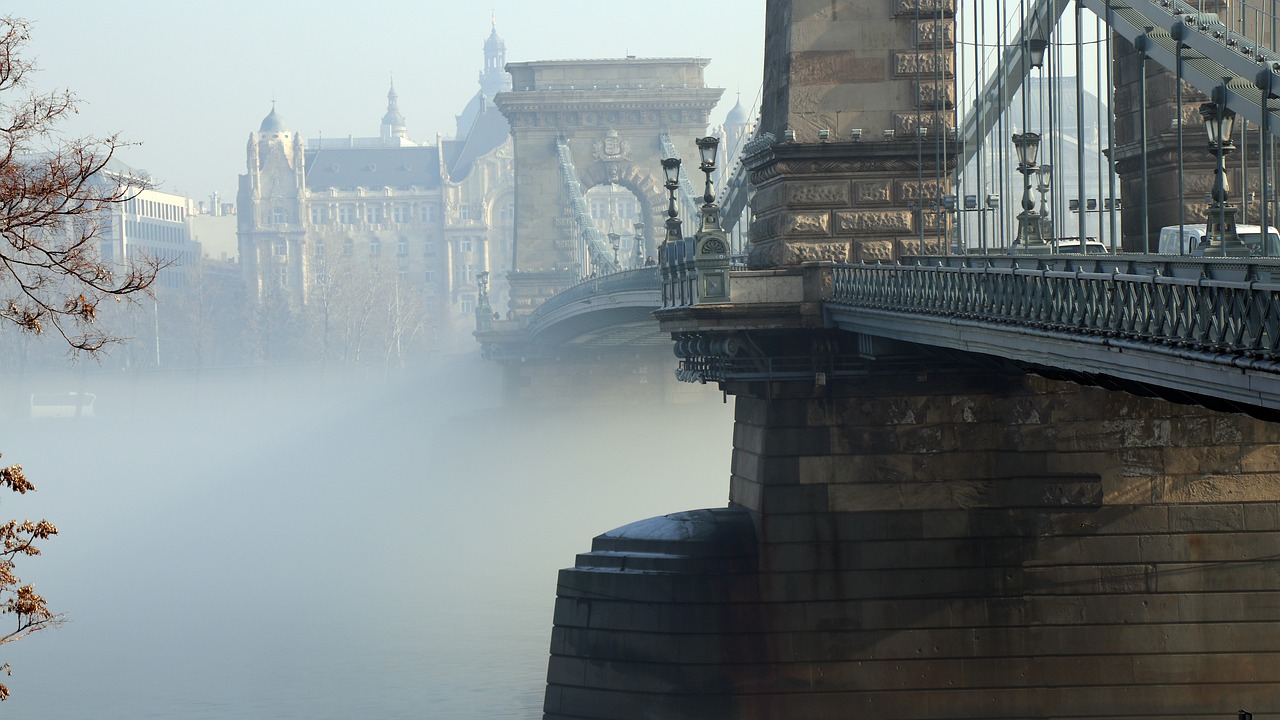 Szimpla Kert is in the Jewish district, located in District VI. We combined our visit with a trip to the Dohany Street Synagogue, a few blocks away. The synagogue is the largest in Europe, topped with onion-shaped domes arrayed in gold, gleaming in the sunlight. The buildings and the courtyards of the synagogue include the Jewish Museum, the Heroes’ Temple (added in 1931, serving as a memorial to Hungarian Jews who gave their lives during World War I — little did they know what horror was to come in a few more years), the Raoul Wallenberg Memorial Park and the Jewish Cemetery. The Holocaust Memorial, also known as the Emanuel Tree, is a weeping willow tree with the names of Hungarian Jews killed during the Holocaust inscribed on each leaf.

We went from a stirring morning to a sensational afternoon.

The historic ghetto of Budapest with its abandoned factories, crumbling apartment buildings, and blocks of run-down houses has undergone a profound change in the last few years. Badly damaged during World War II, and left to further decay after, the district has been renovated and converted into trendy cafes, bars, restaurants, shops and clubs, including several ruin bars, which have revitalized the area.

With the assistance of some locals, we arrived at Kazinczy Utca 14, the street address for Szimpla Kert. First, a funky store called Szimpla Design Shop Handcraft & Boutique caught my attention, so we went in. Colorful, unconnected items fill the little shop: an antique typewriter, greeting cards, jewelry, funky pillows, glassware, handbags and elaborately decorated lampshades. I turned a corner to look at some artwork and noticed that it led somewhere. The clerk told me the shop was connected to the bar — same owners — and to go through.

I couldn’t help gawking as I took in the sensory overload that is Szimpla Kert. Had I tumbled down Alice’s rabbit hole? I’d never seen something so insanely whimsical! 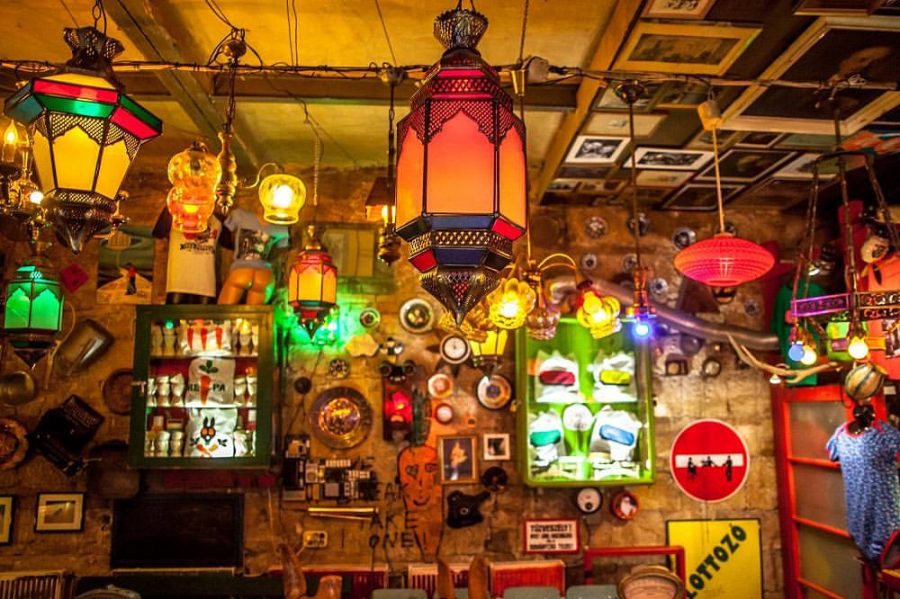 Someone get the lights***Szimpla Kert***

The old building had become an eclectic mishmash of junkyard salvages, magically strung together by colorful Christmas lights. We wandered through corridors off the courtyard and into room after room filled with kitschy décor from floor to ceiling. A bathtub and an old car were converted into couches, guarded by giant plastic rabbits and assorted mannequins in funky outfits. A thousand random doodads were scattered around. Graffiti- covered walls sported old posters, paintings, pots and pans, antique plates, clocks, old typewriters and shelves filled with odd items. Bicycles, guitars, disco balls and colored light fixtures dangled from the ceilings. No space was too unlikely or too small to offer a bit of quirky color or sparkle.

We wandered out to the back into the open-air garden filled with café tables and a bar. A young bearded British guy was strumming a guitar, singing a song about sticks and stones and being a believer. The second floor overlooks the garden through a wire mesh that creates an airy mid-level atrium filled with potted plants, vines, and ferns. To enjoy this vantage point, I grabbed a beer from one of the many bars, and my husband ordered a Cabernet from a wine bar. For those so inclined, there’s a shisha bar, where you can choose from one of their many fruity tobacco flavors. 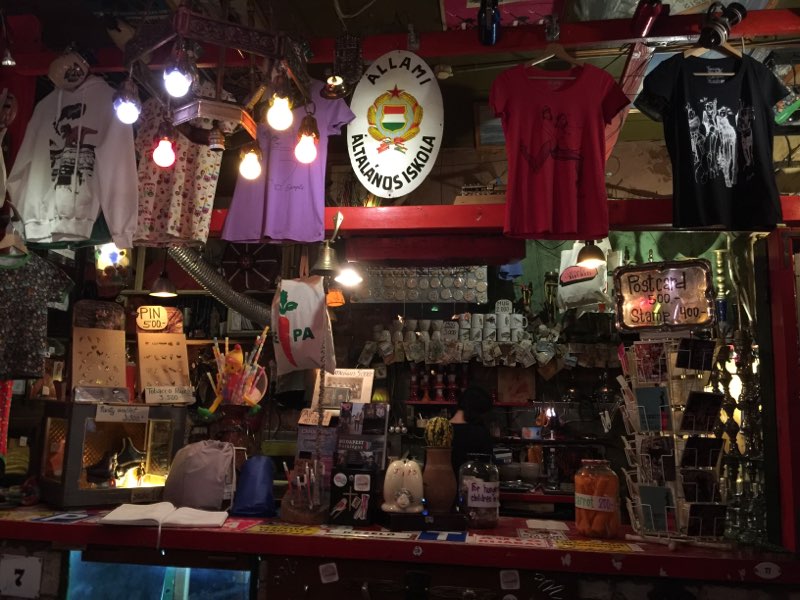 One of the eclectic stores in the mix. It all somehow makes sense when you’re there…

You’ll find nooks for conversation, floors for dancing to DJ’s on the weekend, or the particular excitement of live entertainment on an open mic night. Come as you are, or as you would like to be. But come!

6 Ways Not To Kill Your Partner On Vacation

Let’s face it, you’ve thought about it