On any given day Jake is making bratwurst, burnt ends brisket sausage, cassoulet sausage, duck andouille sausage, Tokyo chicken sausage or lamb sausage, along with specialty sausages and kimchi, pickles and peppers and a variety of mustards. Jake’s Handcrafted, if you haven’t noticed, is a sausage forward place.

Jake has lived and traveled the world, working stints in kitchens is Singapore, Hong Kong, Miami and NYC. His travels are evident in his food — local cuisines are translated into the sausage form.

From paella to falafel to the Cuban sandwich, it’s always exciting to see what tumescent wonder pops up on the menu. Do yourself and your dining companions a favor by ordering a sampler, a nice stiff drink or a cool beer (in the winter check out the hot buttered bourbon) and settle into a primal dining experience.

Jake’s has a nice, walled backyard with picnic tables to sit with friends. Movies are shown on the back wall in the summer. The long, narrow bar in the front of the house is a great place to park yourself and watch the comings and goings, while enjoying your sausages and a great beer or cocktail.

Let’s talk to the Sausage King!

The writing on the wall

Where are you from and when did you start getting interested in food professionally?

I was born and raised in Miami.  Food is in my blood.  My grandfather owned Raphia’s on Miami Beach, imagine the lovechild of [New York’s] Russ & Daughters and Katz Deli.  My mother was a chef’s publicist, and my stepfather is a multiple James Beard Award winner and tv personality (Barbecue master Steven Raichlen). 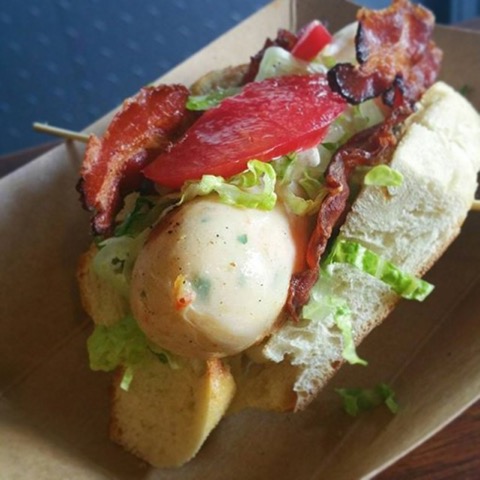 What restaurants and cities have you worked in?

My first chef position was in Hong Kong — Miami Spice — which received 4 stars in the South China Morning Post.  I had a restaurant in Miami, Jada, that earned an Exceptional rating by the Miami Herald, their highest rating at the time.  In NY I worked with Drew Nieprorent and the Myriad Restaurant Group, at Nobu, Tribeca Grill, Heartbeat… I also did a lot of consulting with them.  I opened Singapore’s first all live-fire fine dining restaurant, Wood, where I received 4 stars in the Straits Times.

OK then, why sausage?

We were looking to create a friendly local bar with better than good food, and of course — something different.  Sausage and beer is a natural marriage. 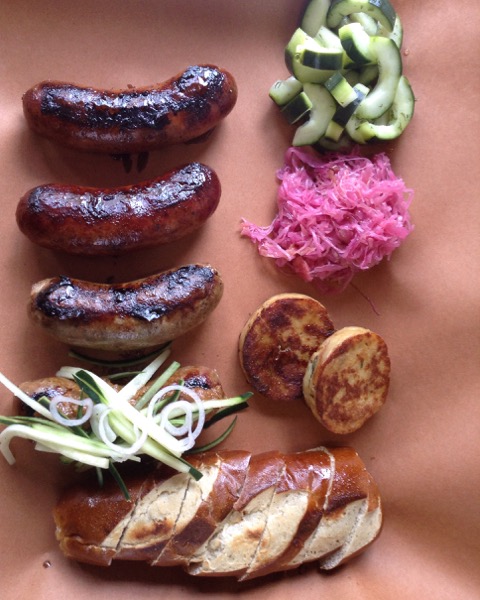 How do you come up with your sausages?

I draw inspiration from everywhere.  As a huge fan of sandwiches, and a lover of classics I’ve found a lot of success re-imagining iconic sandwiches and dishes in sausage form.  For example, a nod to my deli roots the Reuben is a lot of fun — corned beef & swiss sauce on a caraway buttered baguette topped with homemade sauerkraut and Russian dressing.

Our 2 most requested by far are the Takeout — char siu (Chinese Barbecue) & fried rice sausage, topped with moo shu veggies, fried noodles, and duck sauce, a perfect mouthful of Chinese food in every bite, and the 2X Smoked Brisket — 100% brisket sausage studded with Texas Style burnt ends and 18 hours of smoke.

Have you made a really awful sausage?

None that I would consider awful.  However, some were conceptually hard for people to wrap their head around, like the Oyster Rockefeller.  It was cool, plump oysters, gruyere cheese, garlicky bread and sweet fennel.  Unfortunately, most response were — it’s good but, it’s just too weird!

What wouldn’t work at Jake’s in terms of food?

Over the years we’ve done suckling pigs, barbecue de’chivo, tons of briskets and the like.  Our goal is to create egalitarian dishes that make delicious cuisine driven dishes that are accessible to all.  That said gels, foams, and anything over intellectualized has no place at Jake’s.

How important have your travels been?

Travel is a huge component in what keeps us moving forward.  I’ve found that the trick for me is recreating a memory of a specific place or dish.   The Cubano is a good example of this: pernil, which is seasoned pork with the ham, pickles, and swiss — a true Cuban sandwich in a link.  Every time I eat one it takes me back to my childhood going to Little Havana with my Dad.

Last summer we started selling sausages wholesale, which was a big step.  There’s a big difference in making things in small batches at the bar compared to doing 1000 lb. runs in a USDA facility and maintaining quality and integrity.

We’re working on expanding our reach with that and gearing up for launching retail packaging.

Where else besides Jake’s can folks find your sausages?

Currently you can find them at Yankee Stadium in the Legends and Champions suites, Blue Smoke restaurants in the city, The Brooklyn Diners, Harlem Hops, and Facebook’s Cooper Square campus, to name a few.

How many dick jokes do you hear a day?

Too many.  I guess being a bar that sells sausages that’s sandwiched between a sex shop and a gay bar is too much inspiration for people to resist.

Love Among the Ruins

The Ruin Bars of Budapest are a local phenomenon, and have risen out of Communist-era decay

The Host with the Most 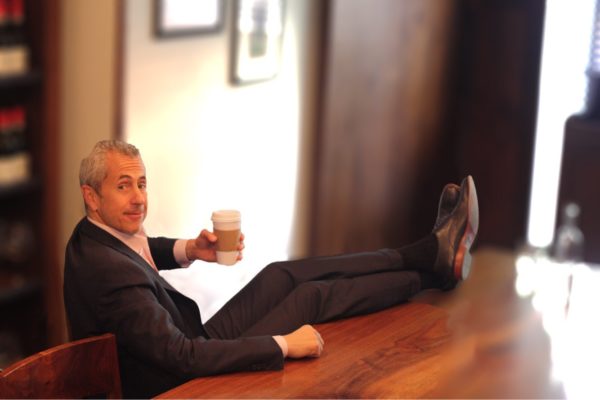