I am an immigrant in Los Angeles, not from another country, but from New York. Make no mistake, though – we who have relocated from the East Coast of our continent, trading the punishing winters and stresses of our former city for the sun, the sea, and the ease of tension found on the West Coast – are immigrants, nevertheless. We feel it immediately upon arrival. Never have I had a conversation about LA, with another former New Yorker, in which the first thing said was not about isolation. It has crushed many a sturdy soul, sending them packing back East, where nothing they had endured there was as brutal as the aloneness they felt here.

We have all seen the photos of the empty streets in great cities across the globe. In Los Angeles, the most iconic images are shots of the vast expanses of freeways, eerie ghostways now – those drone shots of gargantuan cables in tangles not much different than the ones behind your desk. These feats of engineering define us in so many ways – the lack of public transportation and the filthy black grime on everything, to name two – but the most egregious one for the human spirit, the one you feel as soon as you arrive at LAX and get into a car, is isolation. Cars isolate us here in a way nothing else can. There is no walking out of your apartment building to catch the subway, amongst a throng of other humans, just two blocks away. There is no, “Let’s meet at Veselka in twenty minutes. I’m dying for pierogi.”  Traffic demoralizes. Rush hour cripples. In Los Angeles, the time it takes to meet someone for brunch demands an unreasonable chunk out of your day. Visiting your friends in Silver Lake is a day trip.

I am alone in my car. I look at the sprawling expanse of Los Angeles and can’t bear the loneliness inside the car, on a freeway with thousands of others, traveling side by side, so close yet so isolated from one another in our cars. I don’t recognize this feeling as the loneliness of isolation. I call the dread I feel, inconvenience. Traffic is too inconvenient. Those of us lucky enough to have a garden would rather stay home and dig or eat lunch outside. Those who don’t have a garden, would rather stay home and read a good book or binge watch Vida. It is not, however, because it is inconvenient to drive to Silver Lake. It is the sickening dread of isolation. 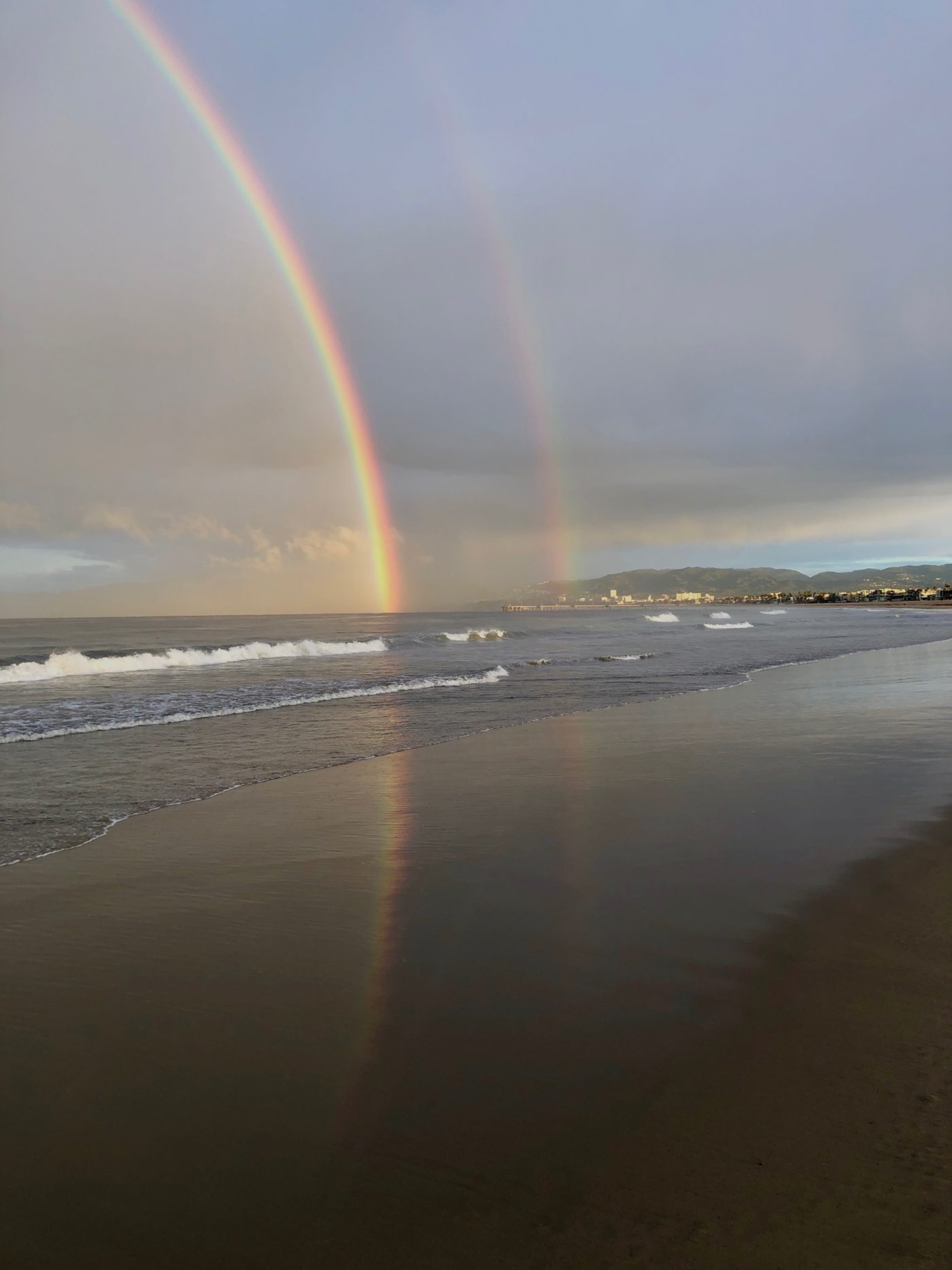 The beach, deserted, at sunrise

But a miraculous thing has happened. Los Angeles has shut down. The air is fresh. There is no black soot on the windowsills. The lone bird in the garden has a mate. There are no cars, or very few. There is nowhere to go. There is no rush hour traffic. There is barely traffic at all, and I feel a sense of freedom I have not felt here before. I am liberated from the tyranny of the car’s isolation. I am one of four million Angelenos experiencing self-isolation, yet I have never felt more connected to this city, to my fellow sisters and brothers here.

The online Zoom meetings or FaceTime group chats for happy hours, tea or dance parties, book readings, family gatherings, AA meetings, therapy, or the slew of other groups sharing common interests, needs, or passions, is liberating for us in Los Angeles in a way it would not be for those in New York, or Paris, or any of the magnificent walking cities. We are invited into each other’s homes. We see our colleagues’ children play or pout, or dig for bugs in their gardens. We go to online museum shows because we don’t have to get in the dreaded car. We share our feelings and experiences in ways we didn’t before because, well, we are living through a time of great upheaval.

When I am lost in this upheaval, when I read about flattening the curve to slow down the spread of this new coronavirus, I think instead of bending the arc.

“The arc of the moral universe is long, but it bends toward justice.”

In 1958, Dr. Martin Luther King Jr. spoke these words to a country still in the fight for equality of all its people. He took them from Unitarian minister Theodore Parker, who used them in 1871, addressing his opposition to slavery in America. I think of this great upheaval as a time when we are being asked to step up again, to bend the arc once more. Perhaps history will one day remember the coronavirus of 2020 as the catalyst for one of those once-in-half-a-century times when we stand up together and bend the moral arc toward justice – for our planet, our creatures, and for us, too, we who have made such a mess of it all. Three years ago, my brother Harry Nicholson wrote this description of Parker’s words:

“That long arc of the moral universe? Doesn’t look so much like a rainbow as a series of thunderbolts, broken and bent, and soldered with mud into a rickety, dangerous bridge from perilous precipice to a leased Eden. But the continual building of it, and it’s maintenance, is what justice is and what justice does.”

I include my brother’s description of the moral arc of justice because it gives me permission to allow for an imperfect arc. My greatest heartaches have always been predicated on the ridiculous notion of a transformation that will be perfect – the one where the arc is a refraction of light, a glorious, multicolored spectrum, traversing the whole sky, and requiring nothing of me but to wait for the sun on a rainy day. To look at it instead as what we build with the broken shards of our wreckage and hold together with band-aids and spit, continually building and patching that fragile bend toward justice, makes it seem possible. It will not be pretty. It will not give us everything we want. It will be hard work maintaining it. But it is possible. Great upheaval brings great change. It brings incredible hardships but in my solitude (a very different thing than isolation) I have found comfort in looking to history, marking the pendulum’s continual swing back and forth between what seems to be imminent ruin and the justice of our leased Eden.

Some years ago, I was working late one night in my studio in Venice Beach. I turned on the radio to help me stay awake and a voice said this single sentence:

“Corruption begins in lack of relationship.” 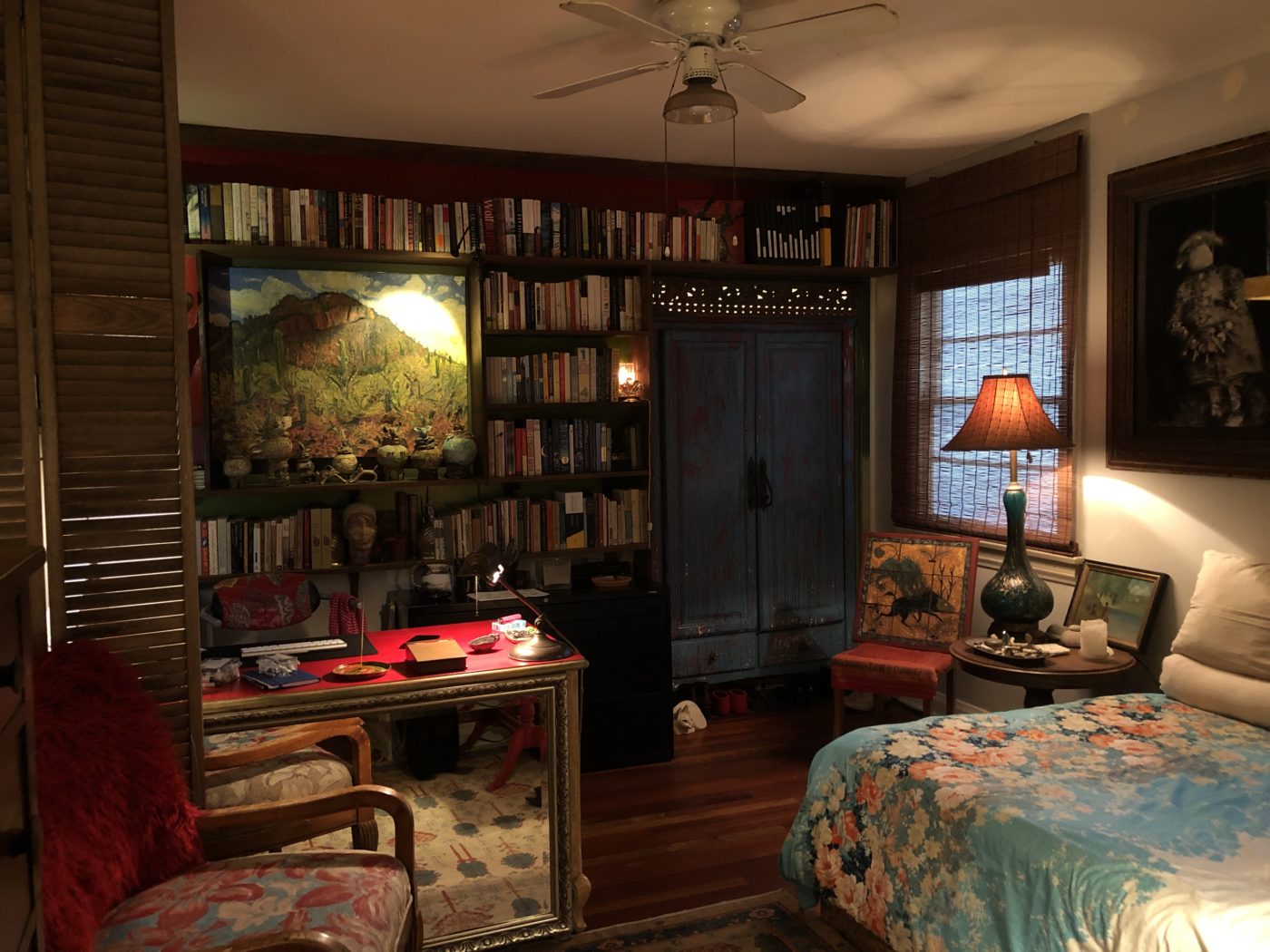 View of the room without a view

It stunned me. I froze. I heard nothing else. I couldn’t wrap my brain around it fully. I knew its truth the moment I heard it and I knew that it went deep but I had to break it down to fully understand it. It was from a recording of a Town Hall New York lecture that the Indian philosopher, Jiddu Krishnamurti, gave in 1971. This is how I laid it out for my not-so-quick brain. Okay, so I have no relationship with the tribe down river because they have scary looking gods I don’t understand. They don’t share tips on crop rotation, the best place in the valley to plant, or what herbs cured a terrible outbreak in their tribe. Why? Because I am too afraid to communicate with them. I have no relationship with them. Instead, I glare at them, trying to look as mean as I can. They prosper and I don’t. I blame it on the scary gods and can then justify stealing from them or even going to war to drive them off their fruitful lands so I can take them for myself. I thought about this and then expanded it to families, political parties, countries. No relationship. No communication. No collaboration. No growth. No generosity. No help. Loss. Death. Yet here we are, all of us forced by a common enemy to remain isolated in our homes, thus finding a new way of developing relationship that is unlike any kind we have known. And, dare I say it, a chance to be a different kind of people than we were before.

For years I have wondered why manners, civility, and accountability are so rare now. I know there are many reasons and many academics who would tell me what they are, but I believe one of them is the anonymity of the online exchange, the “convo” as it is so inelegantly called yet dead-on in describing the lack of any real conversation, of relationship. The social media world allows us to hide. We can be as nasty as we want to be, to anyone we want to slap around, and never have to face real consequences. When we lived in neighborhoods, be they towns or small pockets of cities, we were ostracized by others until we atoned and were forgiven for our bad behavior. Our newly found, online face-to-face social interactions have given some of that accountability back to us.

My room without a view has given me a view of the whole globe. It has given me a new relationship with the world, one very different from the one I had just a month ago. Never in my life have I felt less isolated.

Oh, and I’m thinking I might just go out, take advantage of the freedom of those gloriously deserted freeways, and drive way too fast.